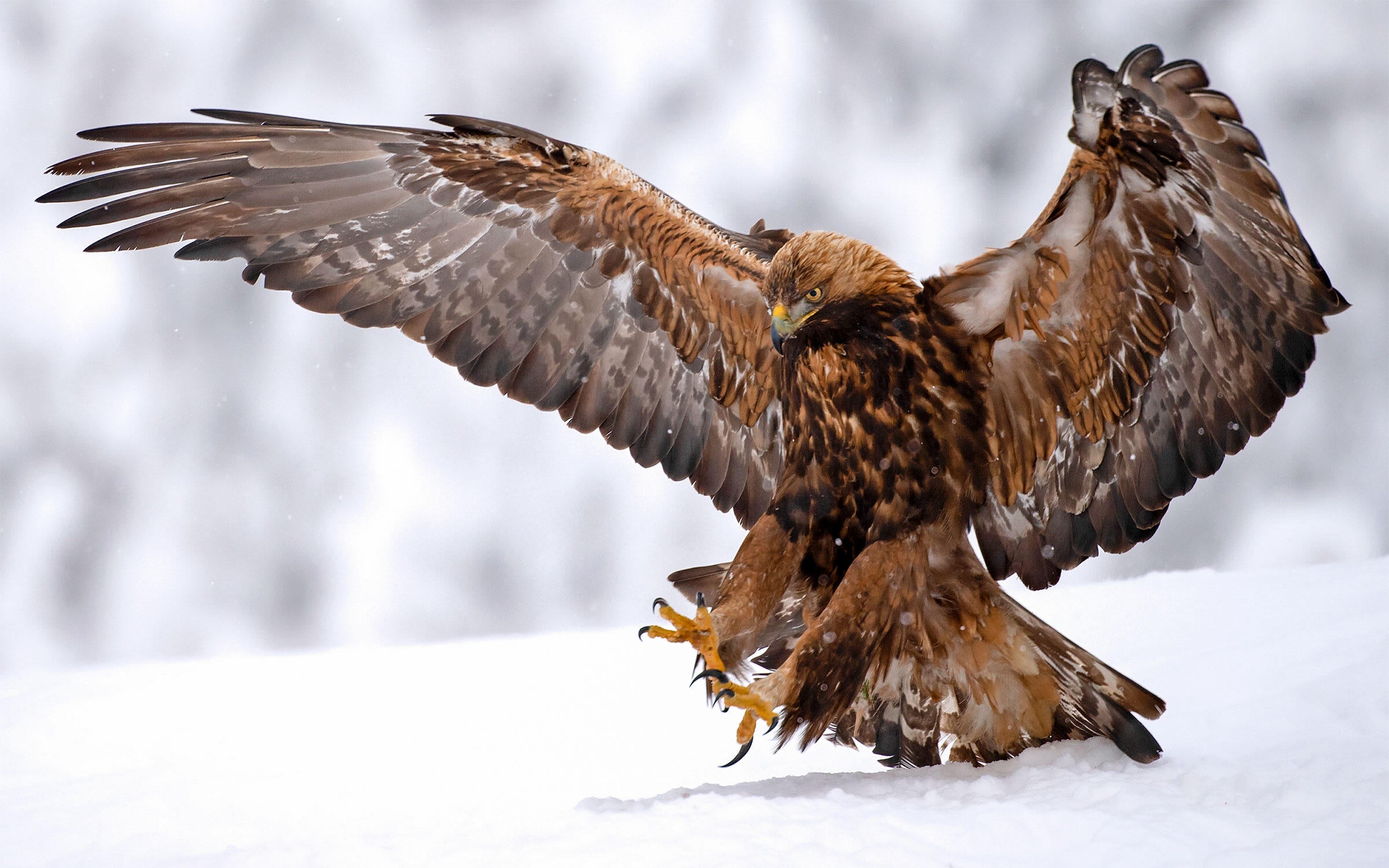 Did Neanderthals Catch and Kill Golden Eagles for Their Feathers and Talons?

New evidence suggests that the ancient hominids held raptors in high esteem—and might have even passed that practice to us.

A hundred thousand years ago on the Spanish coast, a Golden Eagle dove out of the sky and onto a deer carcass splayed out in the grass. The great bird crouched over the body, gripped the dead animal with heavy talons, and tore at its flesh with a curved beak. Suddenly, a brawny figure rose from behind the carcass and lunged toward the eagle; after heavy blows, the Neanderthal hunter stood with the dead eagle in his arms. For a moment he admired the hooked talons, running a thumb along their length; polished and strung into a necklace, they would make a fine symbol of his cleverness, and maybe even grant him some of the bird’s ferocious power. Cradling its body in his thick hands, he set off for home.

This is the kind of story we normally tell about early humans, not Neanderthals. Usually the Neanderthal backstory goes something like this: When Homo sapiens migrated from Africa to Europe and Central Asia 45,000 years ago, they found they had company—Neanderthals. Our ancestors might have competed with them, and many likely reproduced with them. They were, the consensus went, neither as intelligent nor cultured as we are. Then, 5,000 years after modern humans arrived, the Neanderthals were gone.

With only bones left to puzzle over, paleoanthropologists have arrived at a variety of interpretations of Neanderthal intelligence. It’s generally accepted that they created hunting tools of wood and stone. More controversial are claims that they produced art or buried their dead. Many scientists still maintain that Neanderthals were incapable of symbolic thinking, typically relegated to human prowess alone.

Newly reviewed evidence of Neanderthal’s mastery of hunting raptors challenges that traditional story. Raptor talons and bird bones collected from Neanderthal sites now point to intentional hunting of the powerful birds, likely for decorative and symbolic use—perhaps as religious totems, perhaps as icons of personal strength. And according to a recent review of hundreds of Neanderthal study sites in Quaternary Science Reviews, it’s even possible that humans learned the technique from them.

“Evidence of feather and talon use elevates Neanderthals to the world of symbolism, even spirituality,” says biologist Stewart Finlayson with the Gibraltar National Museum and the paper’s lead author. “That was considered to be exclusively the property of modern humans.”

He says that the new evidence paints Neanderthals as smart, selective hunters, actively targeting raptors like Golden Eagles, scraping their wings for feathers, and harvesting their talons. They were doing so long before the first humans arrived in Europe. And all of that suggests a people who, like us, held the Golden Eagle in special esteem.

“The study of birds had a major impact in changing the study of Neanderthals, from Neanderthals being dummies to Neanderthals being capable of symbolic behavior," says David Frayer, an anthropologist from the University of Kansas. "They were never as artistic as the [cave paintings and figurines] we see from 15,000 years ago in Europe. But they were not devoid of these things.”

The ability—or perhaps the need—to imbue animals with meaning, and to try to embody their power, has long been seen as a quintessentially human trait; indeed the use of symbols has been tied to human intelligence. Consider the heraldic beasts on Medieval knights’ coats of arms, or the widespread use of elephants and donkeys in American political cartoons. As potent aerial hunters, eagles have long made for a particularly powerful symbol. Some Native American tribes still traditionally harvest their feathers for sacred ceremonies; the people of Rome regarded them as both Olympian messengers and emblems of imperial might (a use Americans would recognize).

But the Finlayson family’s work calls that human-centrism into question. The family—Clive the father, along with his wife Geraldine and son Stewart—identified remains from 161 bird species in the caves of Gibraltar, an ancient complex where Neanderthals once lived. “It was indeed the Neanderthals that brought them in,” Finlayson says. “There is evidence of cut marks made by their tools on wing and other bones, of roasting the birds for eating, and even Neanderthal tooth imprints on some bird bones.” This in itself is impressive, he says, as it’s not easy for hominids to catch most birds.

More impressive, though, is that when the Finlaysons reviewed the bird remains from some 154 Neanderthal sites, they found large-bodied raptors—largely Golden Eagles— at 75 (or nearly half) of those sites.

The proportion of large raptors far exceeded what’s natural in the wild, given that apex predators tend to be among the rarest animals in a given environment. This prevalence of eagles was particularly notable to Eugene Morin, an anthropologist at the University of Trent who was not involved in the study. “We don't have evidence that they're using waterfowl or things like ducks or geese or swans,” he says. “They’re systematically using large raptors such as vultures and eagles and large falcons.”

The Finlaysons argue that not only were Neanderthals targeting raptors, but that they particularly valued Golden Eagles, given their prevalence in the deposits. The eagle remains largely constituted wing bones and talons, which are far from the most appetizing parts of the bird. The wings showed signs of being scraped, perhaps to dislodge big primary feathers for decoration. And then there were the eagle talons, which had been carefully detached from the toe bones—evidence of intentional butchery and polishing. This is likely an early step in a long-continuing human tradition, Finlayson says: catching eagles and carrying their parts as a token of the bird’s strength.

By the time modern humans arrived in Europe 45,000 years ago, and before raptor remains begin turning up in their sites, Neanderthals had been capturing eagles and other large raptors for at least 85,000 years, Finlayson says. It’s possible that our ancestors watched them hunt and harvest eagle feathers and talons—and learned.

However it happened, our veneration of big raptors gave rise to cultural practices like those of the Kazakhs of the Mongolian steppes, who famously hunt with Golden Eagles, and to the presence of eagles as symbols of power in everything from Arabic poetry to European nationalism and Japanese folktales.

“People used to say that Neanderthals and modern humans didn’t interact,” Finlayson says. “Now we know they interbred freely . . . so why not exchange ideas and practices as well?”

Sirens of Greek Myth Were Bird-Women, Not Mermaids

A new translation of Homer’s Odyssey corrects the record: The Sirens' seductive power lies with their otherworldly, avian knowledge.

Tribal aviaries provide a legal supply of Bald and Golden Eagle feathers for ceremonial use, but not enough—so poachers put wild birds in peril.