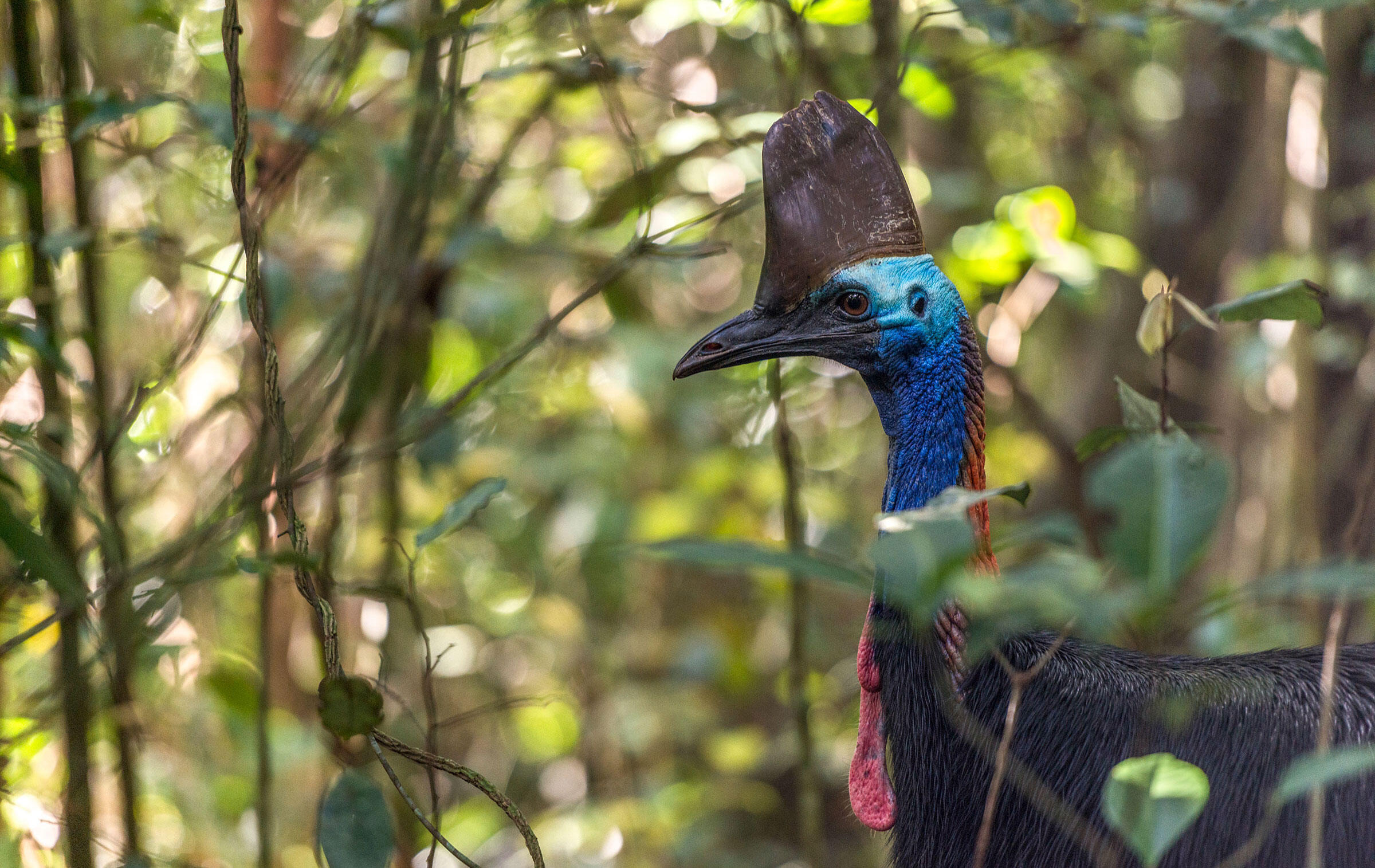 Did Scientists Just Settle a 200-Year-Old Debate About Cassowaries?

A new study shows that the cassowary’s helmet plays a role in regulating body temperature. But that might not be all it does.

Interestingly, this last feature, called a casque, has been the source of considerable debate over the past 200 years. We know that the structure is made up of keratin, like horns, hooves, feathers, and hair, and that it’s covered in smooth skin. But do cassowaries use the helmet for defense against predators or the heavy falling fruits they eat? Does the casque protect the birds from smashing into branches and trees as they trot at speeds upwards of 30 miles per hour through dense brush? Does it play some role in courtship? Or might the cassowary’s casque help amplify its low-frequency boom, which sounds more like the rumble of a lion than the tweet of any backyard bird?

Though theories abound, no one has presented much hard evidence to support any one claim. But a new study published this February in the journal Scientific Reports may have just given us the most evidence-based explanation yet: The cassowary’s casque acts as a thermoregulator, much like the toco toucan’s bill.

To figure this out, Danielle Eastick, a PhD student at La Trobe University, Melbourne, traveled across the continent of Australia so that she could photograph live, adult Southern Cassowaries at zoological parks using a handheld thermal imager. This allowed Eastick to record data across a variety of different temperatures to see what role the casque might be playing in heat exchange.

Of course, it would have been much easier to put a captive cassowary in a temperature-controlled room, but the southern species is listed as endangered in Australia, which complicates scientific study. Furthermore, nobody puts cassowary in a corner. The animals can grow to more than six feet in height, and their claws are perfectly capable of disemboweling a human.

“They have a bad reputation for being the world's deadliest bird, but that it just because of their large size and the fact that they do have the ability to harm you if they want to,” Eastick says. “But they are not the type of animal to attack without being provoked.”

Fortunately, the cassowaries didn’t seem to mind Eastick’s presence, and she was able to record data from 20 individuals that clearly showed the animal’s helmets were heating up in concert with the environment around them. And Eastick thinks she knows why.

“The casque contains many blood vessels,” Eastick says. “When the outside temperature is cool, these vessels constrict so it restricts the amount of blood that goes into the casque so the blood will remain warm and keep the cassowary's body warm.”

Likewise, when it’s hot outside—as it often is in this part of the world—these vessels dilate so that warm blood can enter the casque. Once there, heat is able to radiate outwards so that the blood returns to the body slightly cooler than it was when it came in.

The scientists also found that the back of the cassowary’s casque warms up before the front, which seems to require higher temperatures before it starts dispelling heat. They think this might be because the front and back of the helmet are hooked up to different parts of the circulatory system, but the truth is we don’t know enough yet about cassowary anatomy to say for sure.

Most cassowary casque dissections have been done on old museum specimens or animals that have been in a freezer so long the intricacies of their anatomy have turned to mush. Eastick says she and her colleagues are hoping to do a plastination of the cassowary’s casque vessels, which is the preservation process that replaces water and fat with plastic, as has been popularized by the Bodies Revealed and Bodies museum exhibits.

“But to get the best possible results for this it needs to be a freshly deceased animal,” Eastick says.

And those are hard to come by, since cassowaries are protected in the wild and can live 40 to 50 years in captivity.

As we wait for more casques to become available, there’s still room for plenty of speculation. For instance, the cassowary’s casque may explain why some dinosaurs and pterosaurs evolved similarly outlandish structures.

“Many dinosaurs were also large-bodied animals, just like cassowaries," Eastick says. "That means they would produce a lot of heat, especially in warm temperatures.” They would then also require an efficient way to offload it.

It’s also possible that thermoregulation is just one of the casque’s tricks. Scientists believe the toucan evolved its characteristically large bill as a tool for peeling fruit and later acquired the ability to regulate temperature through the same structure.

“It is possible that something similar has happened in the cassowary casque,"  Eastick says, "but without researching this further we cannot discount any other theories just yet.”