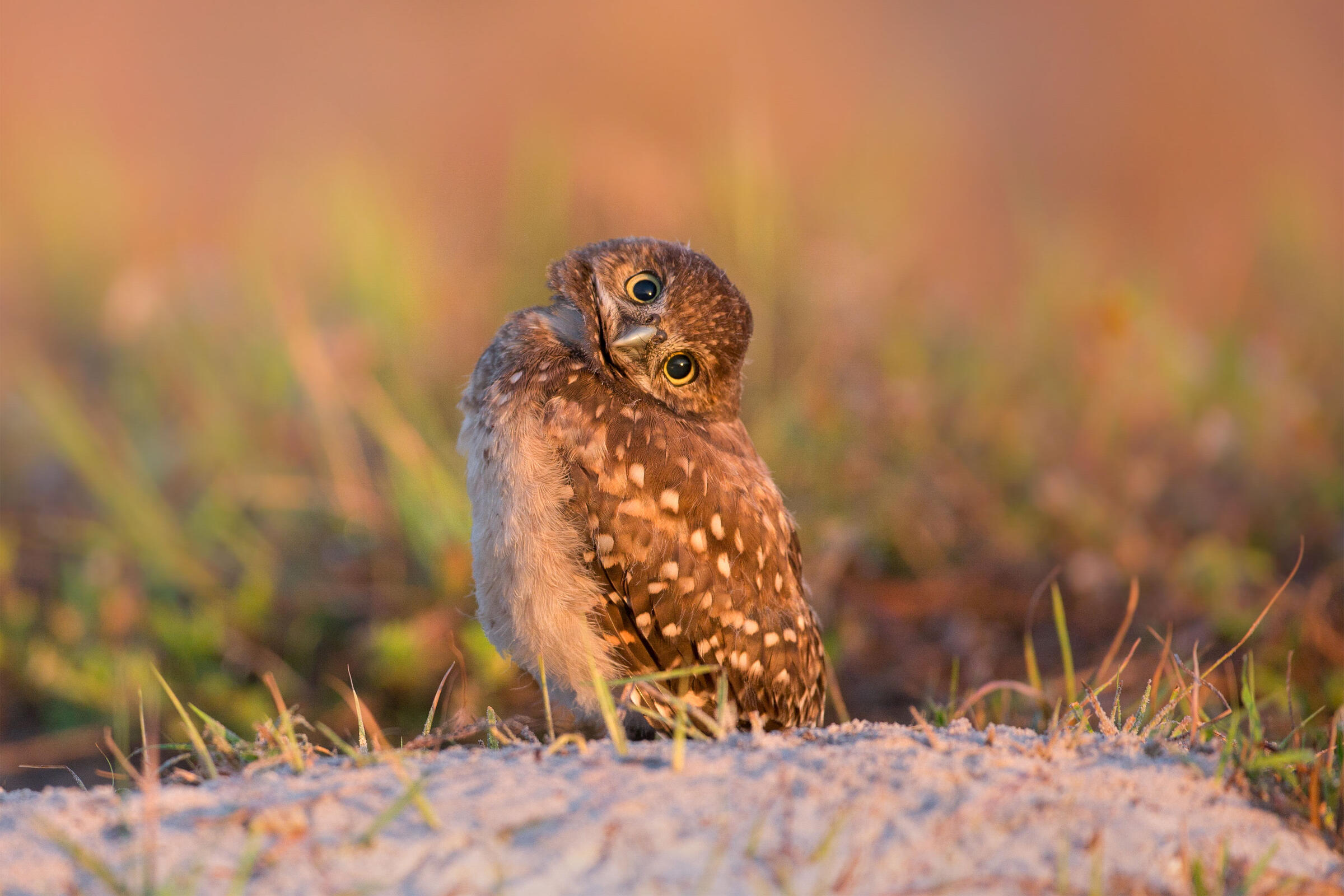 Did Somebody Say Baby Bird Photos?

Why yes, yes we did. Here are our favorite shots featuring chicks from last year's Audubon Photography Awards.

One of the best parts about watching birds is that you never know what you're going to see. This is especially true when baby birds are on the scene. The interactions of family groups, or the antics of the youngsters, are endlessly fascinating to observe.

Photographers who would capture images of these baby birds in action face many challenges. For most species, this stage of life is very brief. It’s a sensitive time, too, and observers and photographers alike must take extra precautions to avoid disturbing these vulnerable subjects. But with patience and skill, it’s possible to capture memorable moments, like these entries in last year’s Audubon Photography Awards.

After you’ve finished admiring this crop of baby bird images, consider the possibility of entering your own photography for the 2021 Awards. This year’s contest closes on April 7.

The big eyes of owls are immovable in their sockets, so for an owl to redirect its gaze, it has to move its head. This baby Burrowing Owl in Florida, standing just outside its underground nest, was turning its head in all directions to peer at the photographer, who was observing from a respectful distance with a powerful telephoto lens. 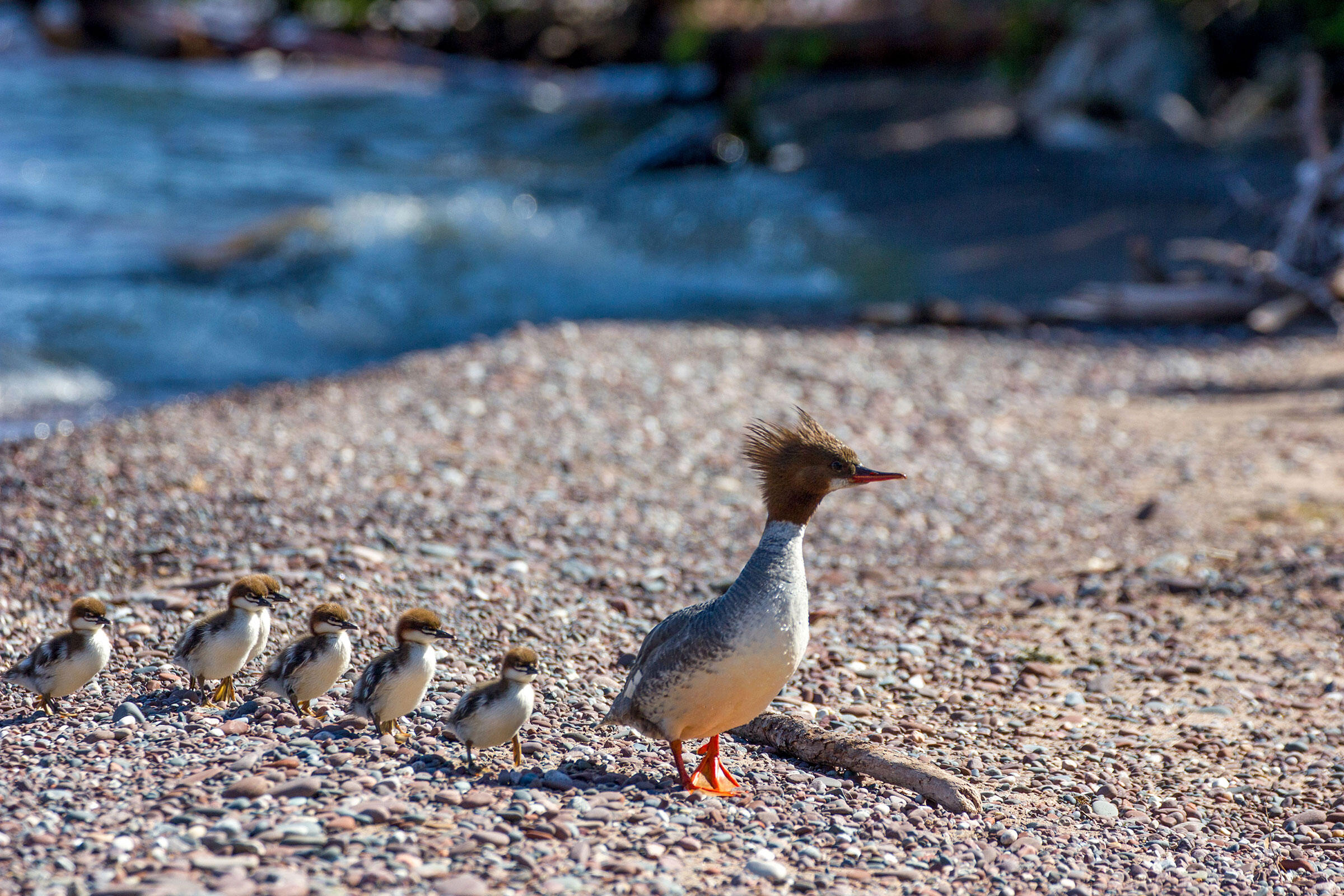 While most ducks place their nests on the ground, Common Mergansers belong to the minority of duck species that usually nest in tree cavities. The site may be more than half a mile from water, so when the young mergansers leave the nest—usually one to two days after hatching—they must be able to walk a considerable distance following their mother to the water’s edge. The young can swim well immediately, and within days they are adept at diving and swimming underwater. 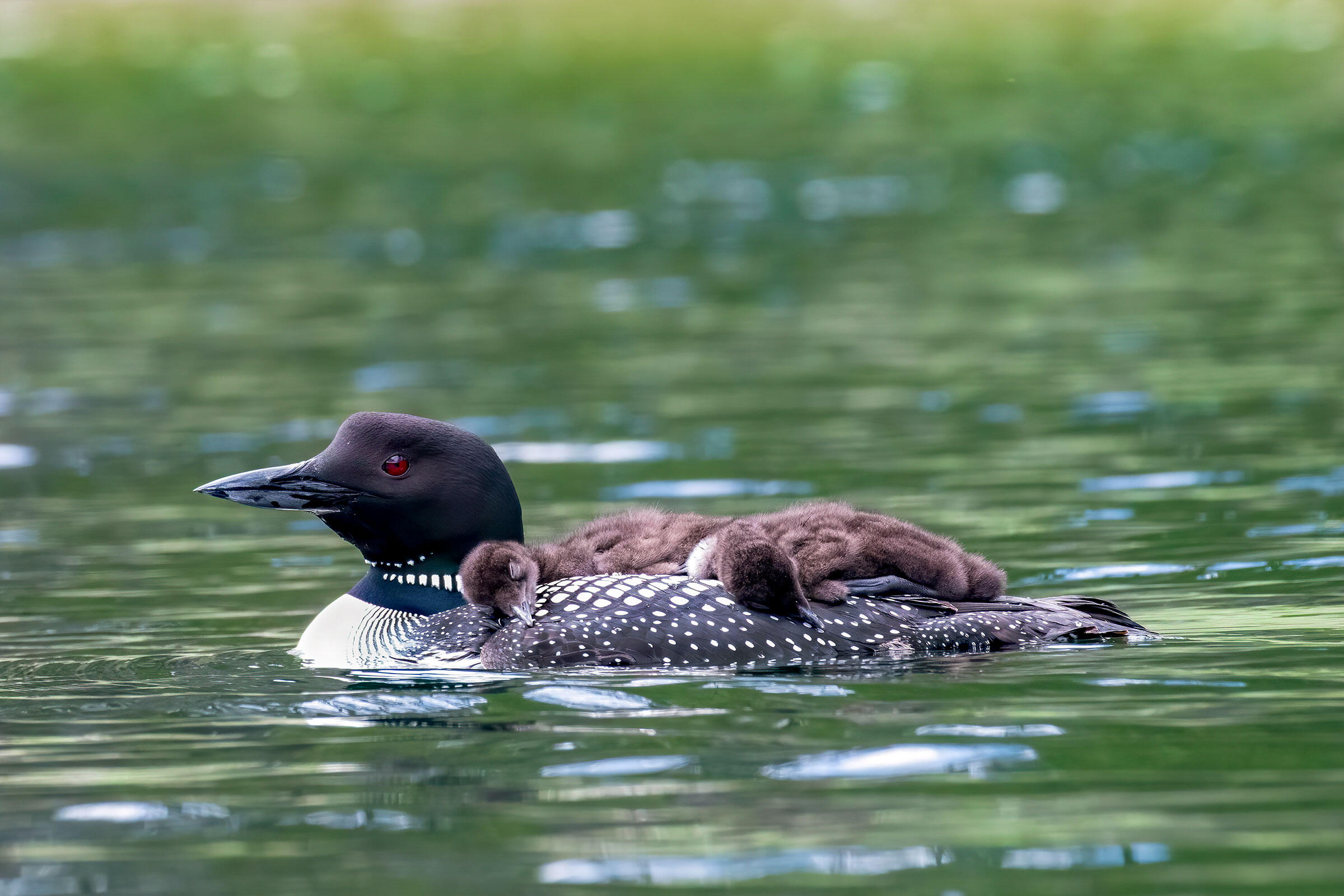 It’s hard work to be a baby Common Loon. They have to do a lot of growing—from newly hatched chicks at less than four ounces to full-grown loons weighing nine pounds. They have to develop mad swimming skills, including the ability to dive fast and deep underwater. And eventually, after they’re a couple of months old, they will have to start learning how to fly. But at least for the first couple of weeks of their lives, if baby loons feel tuckered out from all that effort, they can crawl up onto the back of one of their parents to take a nap. 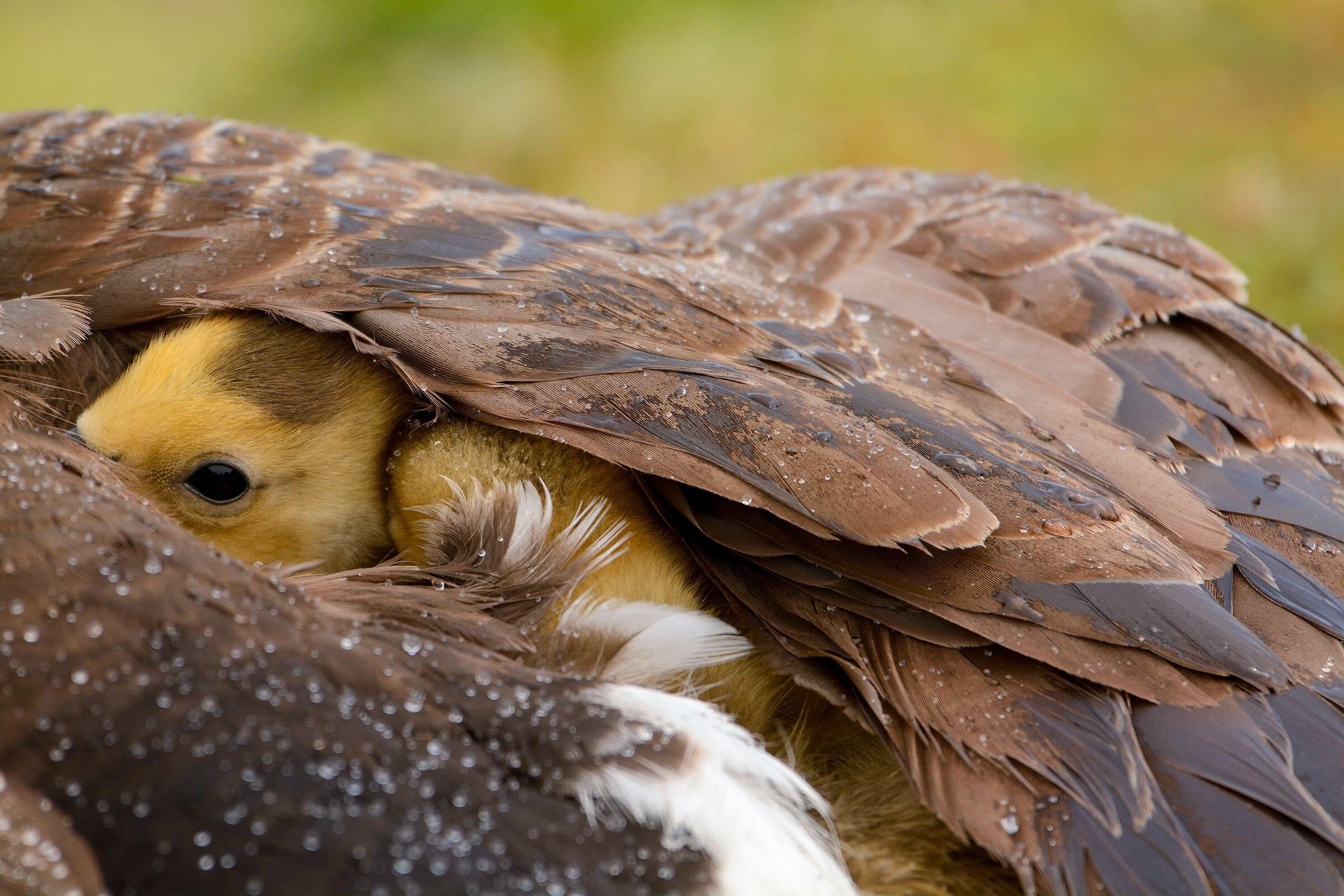 As parents, Canada Geese are famously protective of their offspring. Often this defense is strikingly obvious, as when both members of the pair of adult geese noisily chase away larger animals, or even humans, who venture too close to their young. But they can be protective in gentler ways. Here, a couple of young goslings in an Oregon park take shelter from the light rain by nestling in under their mother’s wing.

Unlike the situation with many bird species, in which females do most of the child care duties, male woodpeckers are devoted dads, contributing half the effort in raising the young. This male Pileated Woodpecker has brought a billful of insects to feed a half-grown nestling. Pileateds are often quite wary, but this bird and his mate had built a nest close to a boardwalk in a popular Florida park and had become accustomed to having humans nearby. 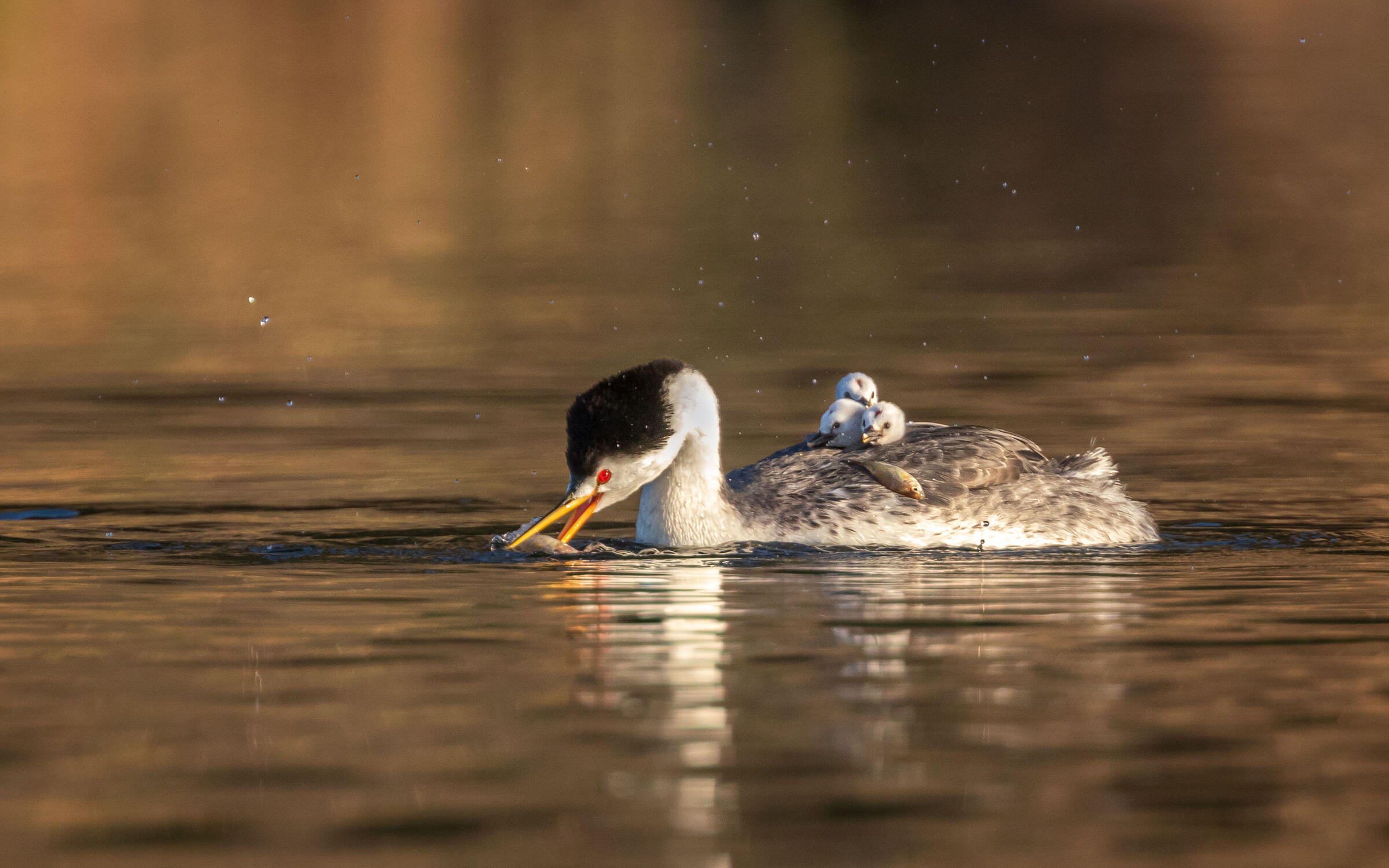 Various water birds may carry their young on their backs, but no others do it as consistently as the grebes. A young Clark’s Grebe will climb up onto its parent’s back within minutes after hatching; after the last egg hatches, the adult swims away from the nest, with the young riding along. Thereafter, for the first few weeks, the adult grebes take turns with their parental duties, one serving as a floating platform for the young while the other dives for small fishes to feed them. 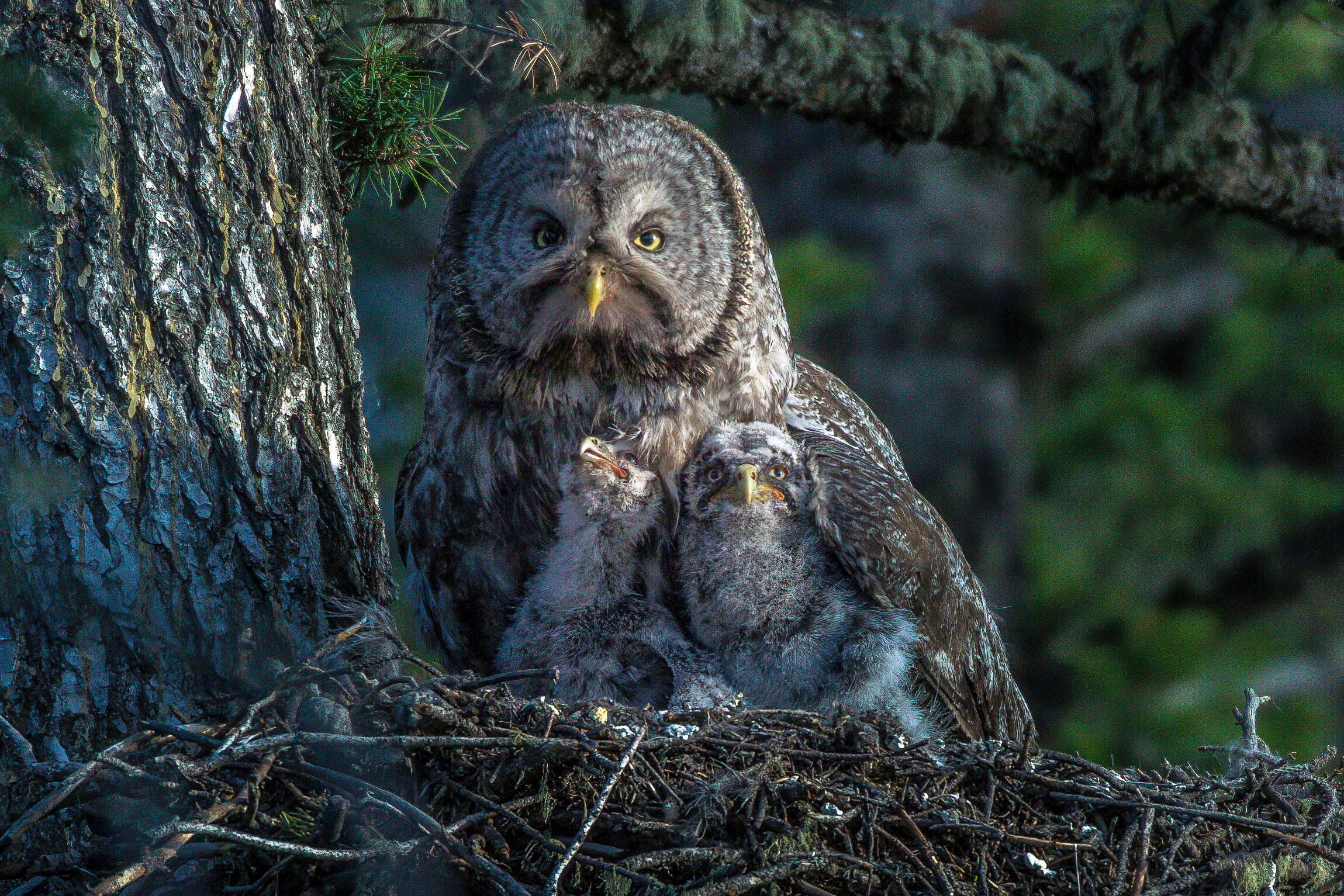 As a rule, owls don’t build their own nests. They find natural cavities or ledges, or they take over nests built and abandoned by other large birds. This Great Gray Owl in Wyoming was using the remains of an old hawk nest in a large pine. From an adjacent hillside, the photographer was able to keep an appropriate distance and still get an eye-level view of the female owl brooding her small young. 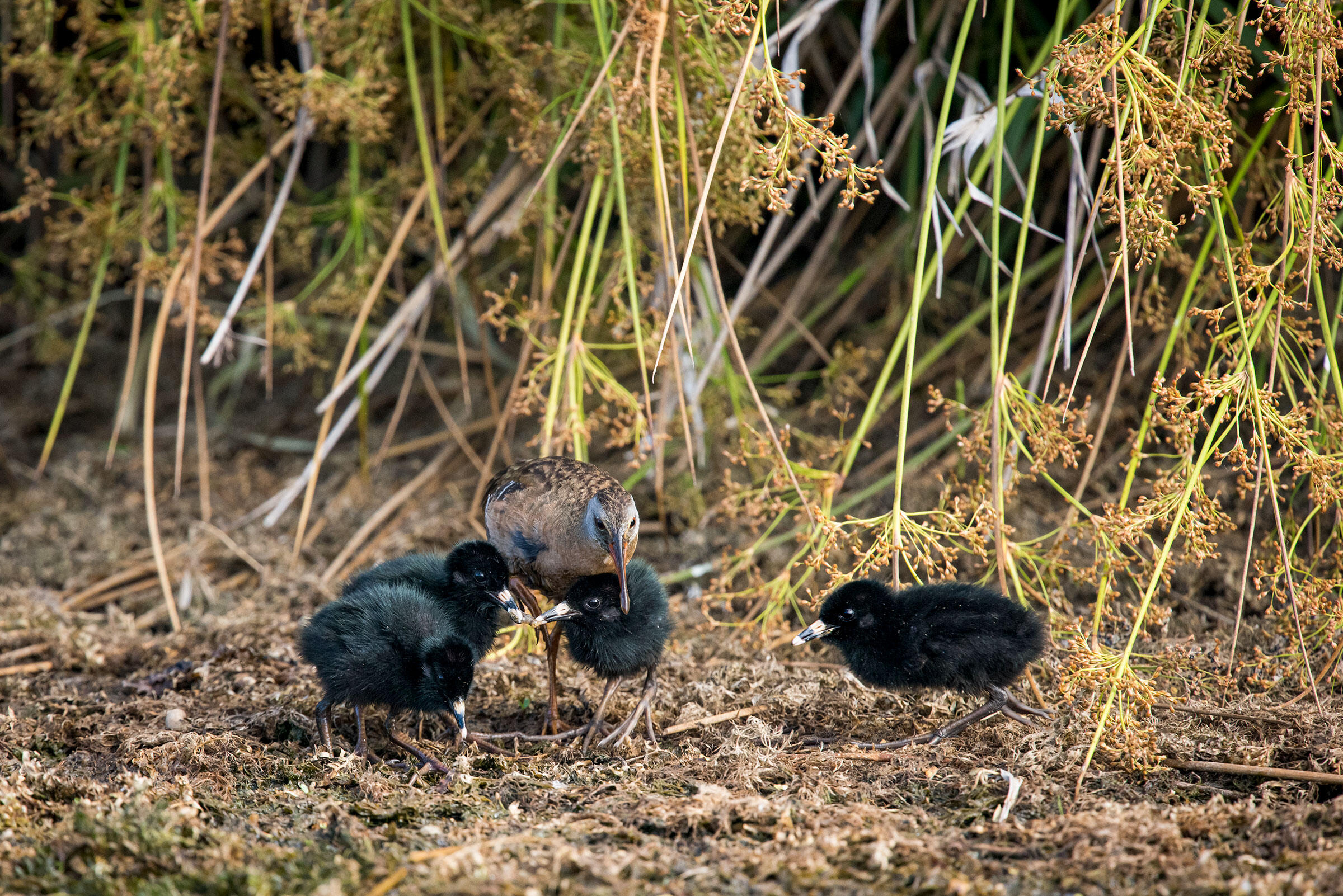 Rails are marsh birds, usually hard to see as they lurk through dense aquatic vegetation. Adults and full-grown juveniles mostly wear subtle colors that are good for camouflage; but hatchlings of many rail species, for no obvious reason, are covered with glossy black down. These four young Virginia Rails are following one of their parents, learning the tricks of finding food along the edge of the marsh.

Everything about hummingbird parenting is remarkable, including the fact that the female incubates the eggs and feeds the young without any help from the male, tasks that keep her on the move for weeks. This female Anna’s Hummingbird has returned to feed her two half-grown young, but she doesn’t even bother to land on the edge of the nest—it’s just as easy for her to hover while she delivers a slurry of flower nectar and tiny insects. While this shot makes the photographer look close to the nest, they were actually about 10 feet away, which should be the bare minimum in this situation. 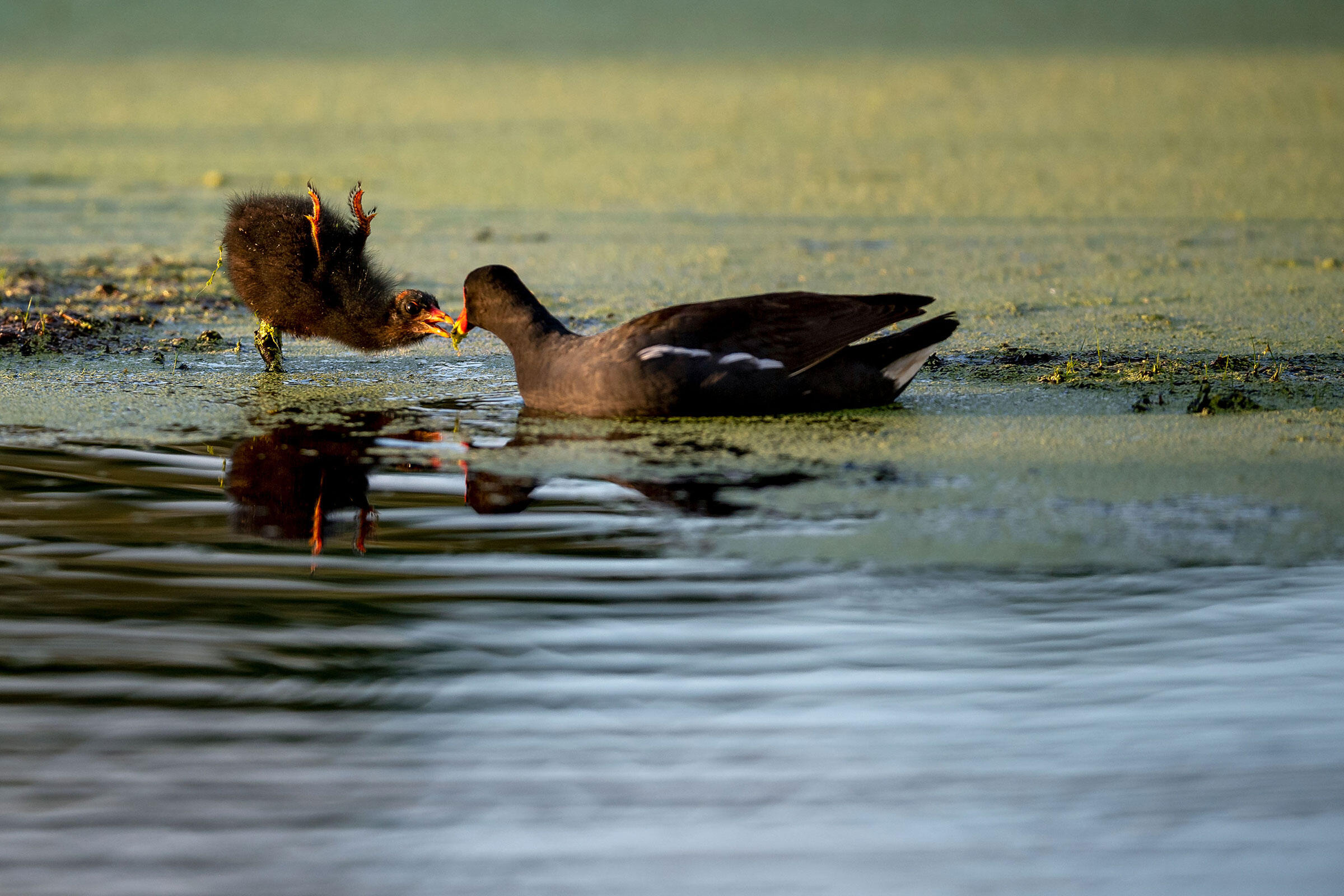 Although it belongs to a completely different family, the Common Gallinule may look like a duck as it swims on marshy lakes and ponds. As with ducks, baby gallinules hatch out of the egg already covered with down, and they can soon leave the nest. One notable difference: While newly hatched ducklings have an instinct to find their own food, baby gallinules like the one in this photo are fed by their parents. They gradually learn to forage for themselves, but for the first few weeks they rely on their parents for most of their food. 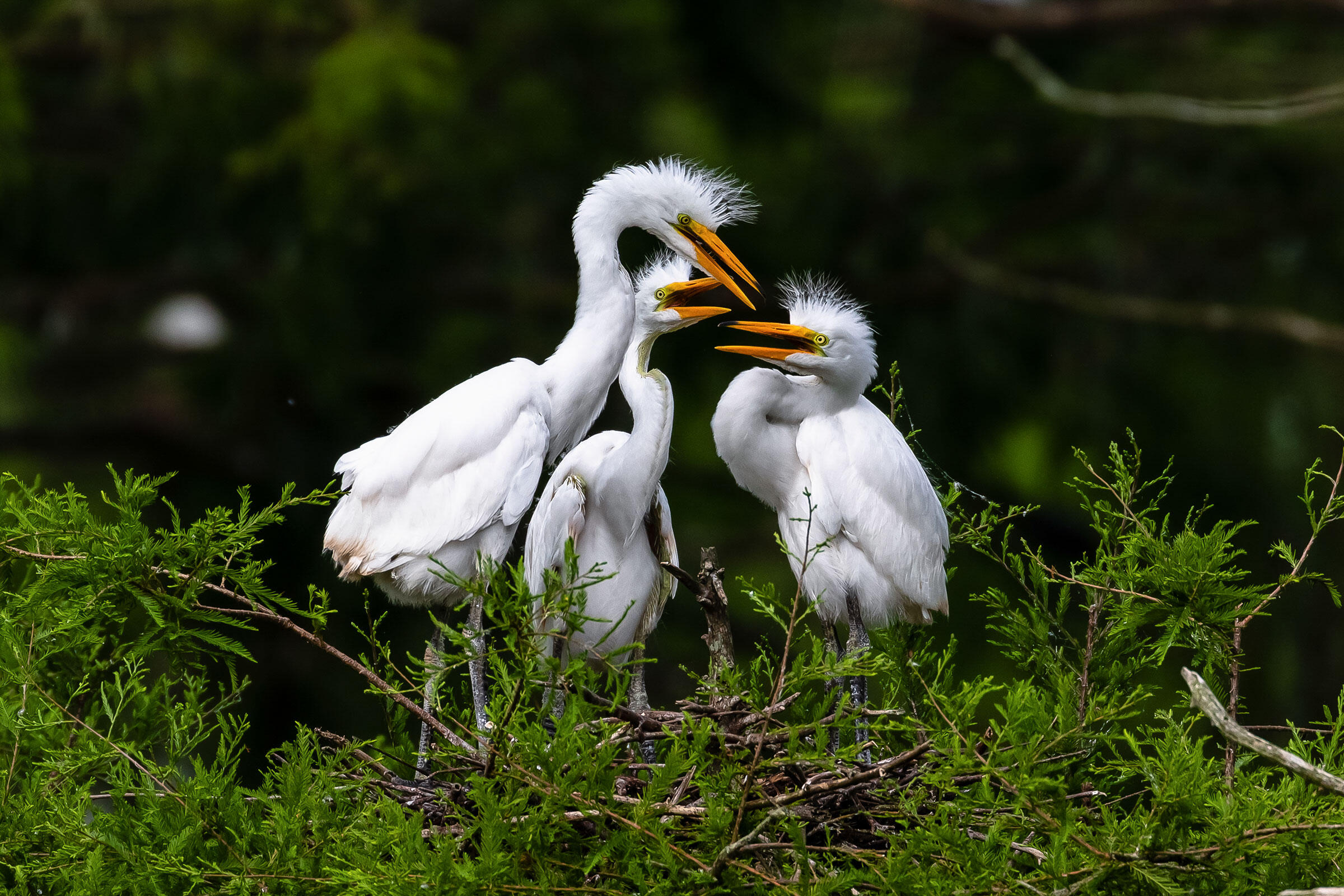 In an awkward adolescent stage, still far from the elegant proportions of adults, these young Great Egrets wait in the nest for their parents to return and feed them. Great Egret chicks may climb around in branches outside the nest after about three weeks—especially when they need room to practice flapping their wings—but they won’t be competent fliers until about seven weeks of age.

In 2019, birders at a Michigan park discovered a very unusual family of Sandhill Cranes. The adults were tending two small baby birds: one crane colt (as expected) and one Canada Goose gosling. No one was certain whether a goose had laid an egg in a crane nest, or whether the gosling hatched nearby and wandered over to join the cranes. Regardless, the cranes seemed to accept the gosling into the family. Baby Canada Geese can feed themselves from the start, while Sandhill Cranes feed their offspring at first; but even if the young goose was confused, it was able to adapt to the situation. In the first photo above, the fuzzy yellow gosling and the fuzzy reddish brown crane colt follow one of the adult cranes across a street. In the second photo, the young crane and the young goose, now about six weeks old, rest together in a weedy patch in the park. 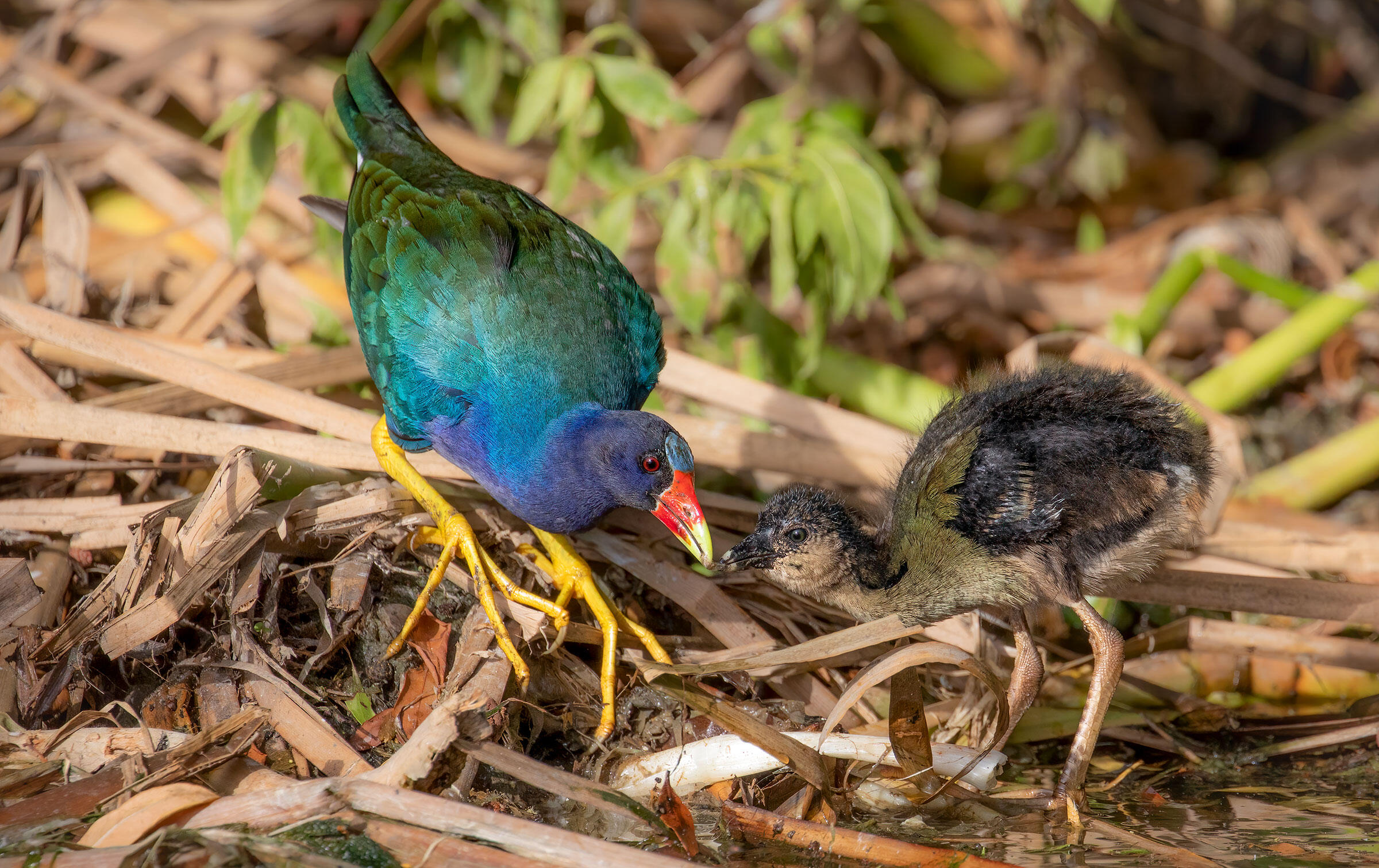 Among the most colorful of water birds, Purple Gallinules are widespread in tropical and subtropical regions of the Americas, from the southeastern United States to northern Argentina. This adult and its gangly youngster were photographed at a small wetland on the island of Aruba. Young Purple Gallinules have a long childhood, being fed by the adults part of the time for up to 10 weeks. Even after they are self-sufficient, they may remain on their parents’ territory for months. 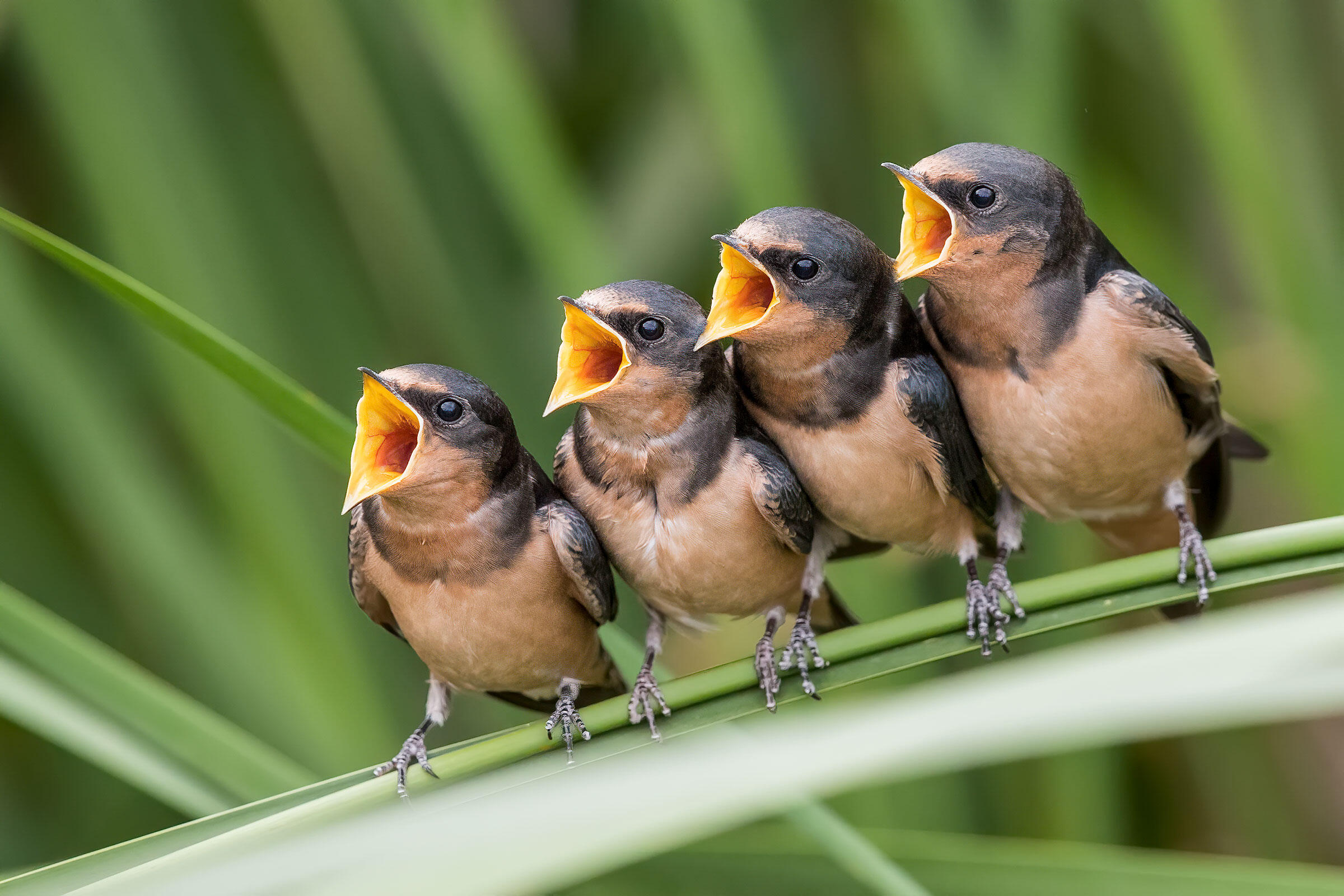 Swallows feed on insects captured in midair, and it takes time to develop the necessary flight skills. Young Barn Swallows don’t leave the nest until they’re about three weeks old. At first the fledglings often perch close together in spots where it’s easy for the parents to come and feed them. Later the adults stop feeding the perched youngsters, making them fly out to receive food in midair transfers instead; this probably helps the young birds to develop their flying abilities. 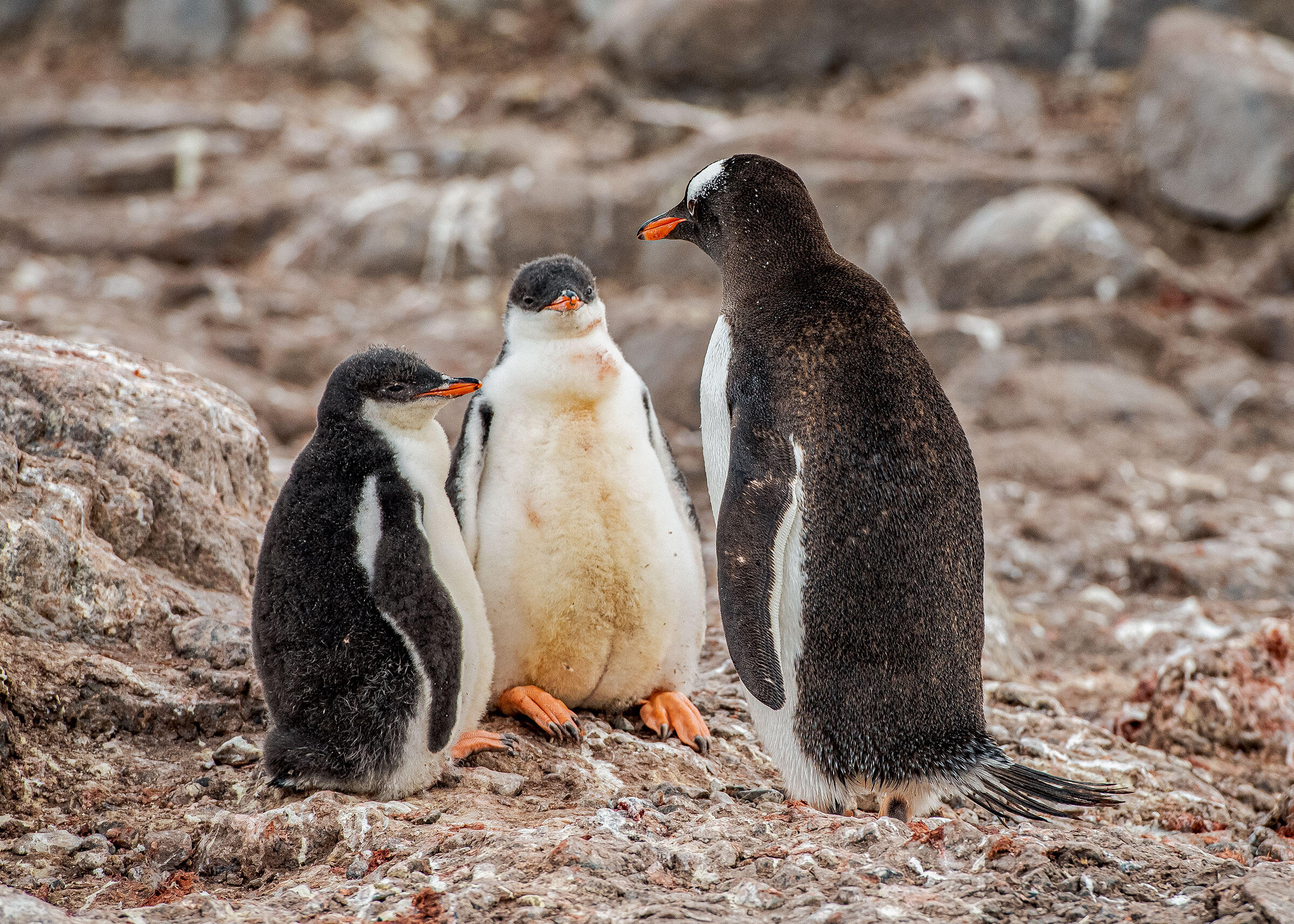 Adult penguins are speedy, graceful swimmers, but their babies spend their early days sitting like lumps on the shore, waiting to be fed. Gentoo Penguins nest on islands and coasts around the Antarctic Peninsula as well as some island groups farther north, like the Falklands. Their young learn to swim and go out to sea at ages ranging from 9 to 16 weeks, with the slowest development occurring at more northerly latitudes.