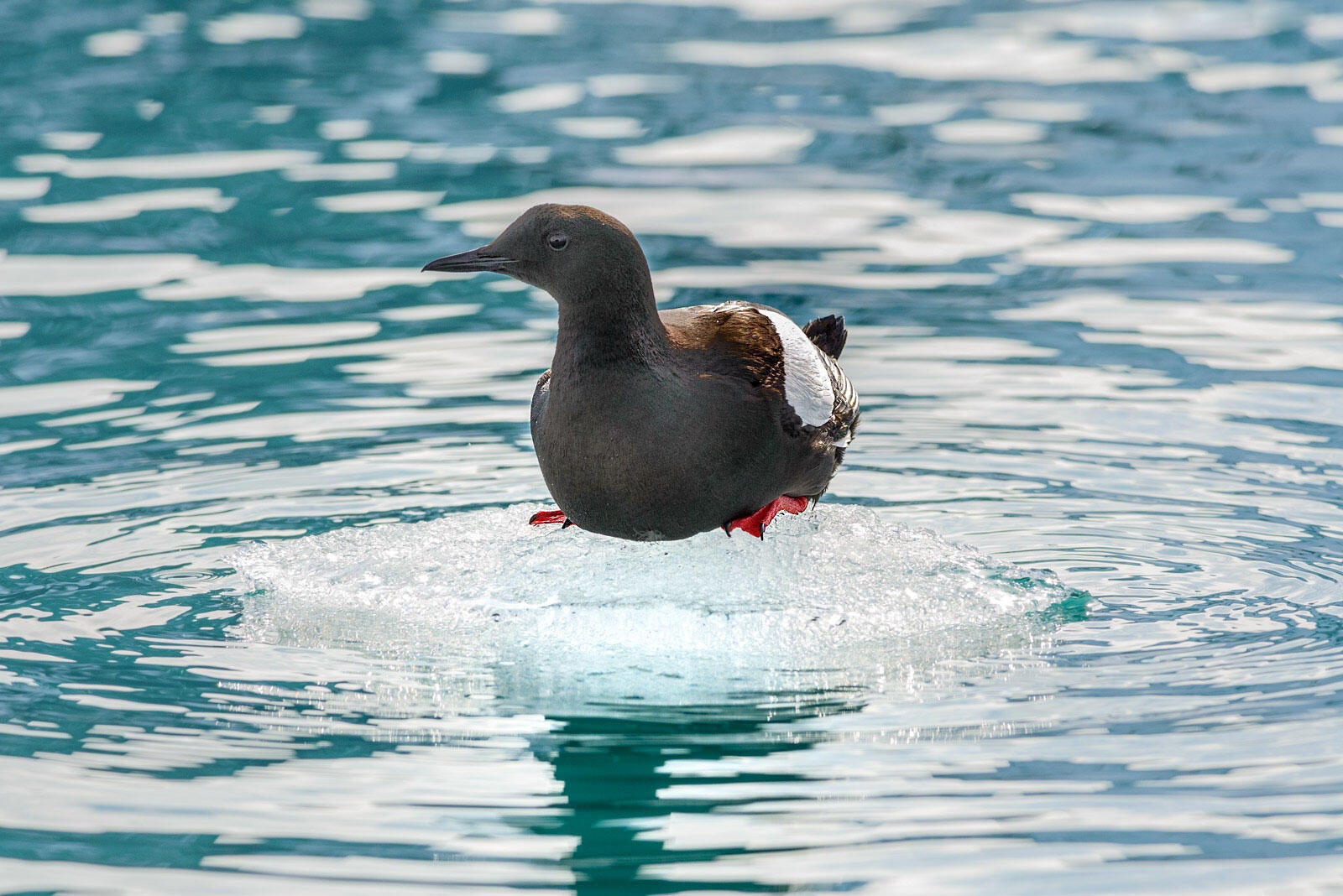 The northernmost populations of Black Guillemot, also known as Mandt's Black Guillemots, are among the true ice specialists of the Arctic. Photo: Allan Hopkins

It’s that time of year again: crisp air, pumpkin lattes, sweaters, and, of course, our annual reminder that the world is gradually getting warmer. At the beginning of each fall, when the Arctic's ice is done melting from the summer heat, the National Snow & Ice Data Center announces how much ice remains (what's called its minimum annual extent). According to this year's announcement, sea ice covered only 1.6 million square miles on September 10, its lowest point for the year. That figure, based on preliminary data, ties this year with 2007 for the second-lowest minimum on record. (For comparison: Between 1979 and 2000, the average minimum was 2.59 million square miles, and the record low was set in 2012 with 1.32 million square miles of ice cover.)

While the announcement of the ever-shrinking Arctic sea ice minimum serves as a clear visual reminder of the earth's warming temperatures, for Arctic wildlife, the picture is more complex. All summer long, the melting ice edge unleashes a rich food source when trapped algae encounters sun-warm water for the first times in months. The resulting algae bloom attracts zooplankton, and then small fish, bigger fish, and top predators such as whales, seals, and seabirds. Changes in the extent and timing of Arctic ice means a shift in food resources, to which birds are adapting and adjusting—some better than others. Here’s how four birds are finding new ways to survive as the icescape around them becomes increasingly unpredictable.

Mandt’s Black Guillemots are ice specialists. The birds (pictured above, and a subspecies of the widespread Black Guillemot) roost along the ice edge in the high Arctic, diving for Arctic cod—the preferred food for Arctic predators—and even plucking the fish from cracks in the pack ice.

But because Arctic cod prefer cold water, they’re now out of reach—too far north or too deep in the water column—when chicks at Cooper Island on the northern tip of Alaska hatch in the summer. So Mandt’s Black Guillemot parents feed their chicks whatever they can catch, and that often means sculpin, a froglike fish that's followed warm water north. Sculpin are bigger than cod, and chicks struggled to swallow their new food at first. Some even choked to death. But guillemot parents seem to be learning. They now bring back smaller sculpin that chicks can swallow. “We were very surprised this past year to have some nests have parents really specialize in sculpin and the chicks have rather decent growth rates,” says George Divoky, who’s monitored the birds with the non-profit Friends of Cooper Island since the 1970s.

As the birds adapt to new food, they must also contend with subarctic invaders moving north as the climate warms. In the 1970s, Divoky noticed Horned Puffins checking out Cooper Island from above, and by the 1980s, the birds had started nesting among the guillemots—and even ousting them. “They started going into the guillemot nests and displacing the eggs and killing the young,” he says. In 2009, they killed nearly half of the guillemot chicks in the colony. “They’re a real climate change signal. It’s good news for the Horned Puffins, but not for the Black Guillemots.” 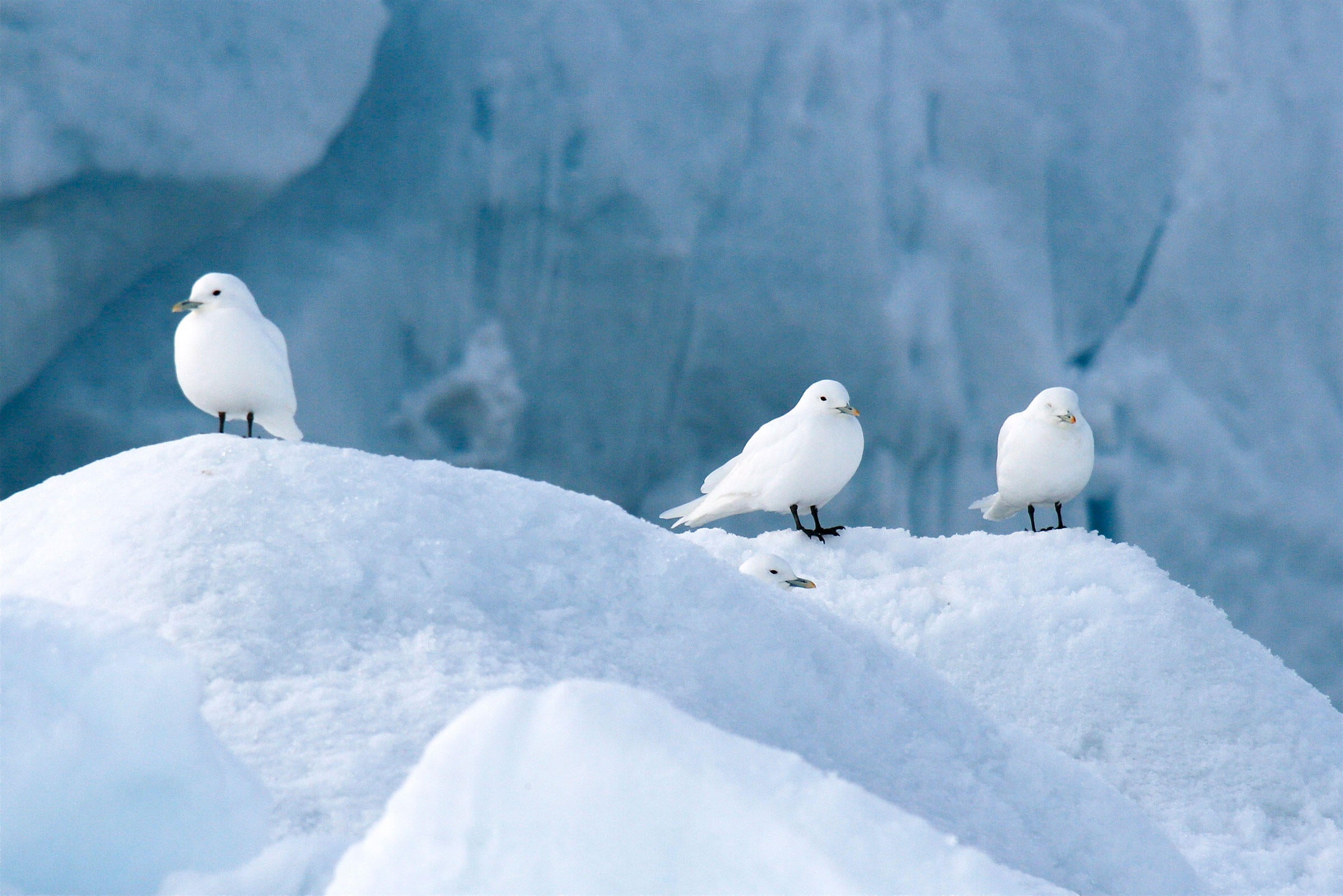 Ivory Gulls migrate along the sea ice edge as it melts and refreezes throughout the year. Photo: Martha de Jong-Lantink/Flickr (CC BY-NC-ND 2.0)

Ivory Gulls are the most northerly breeding birds in the world and the only ones known to nest directly on sea ice—including on icebergs. They migrate along the ice edge to hunt for Arctic cod and small invertebrates that gather there in the summertime bloom.

As sea ice declines, Ivory Gulls seem to be declining, too; their Canadian breeding population shrunk from 2,400 birds in 1987 to 700 birds in 2003, when the most recent survey was completed. The species is listed as endangered in Canada and near threatened on the International Union for Conservation of Nature Red List.

Because they live far from people, it’s hard to say how the population fares overall. But scientists’ predictions aren’t good. “Ivory Gulls are so highly specialized that it’s hard to see what they would do to survive in an ice-free Arctic,” Divoky says. “They’re now dealing with an ice environment that’s very atypical compared to what they’ve had to deal with for the last 10,000 years or so.” Thick-billed Murres play the long game. Each May, when they arrive at Coats Island to breed, Hudson Bay is frozen solid around them. The patient parents-to-be will then wait for the ice to melt, and only once open water is exposed nearby do they lay a single egg, finally confident that they can catch enough food to feed their chick. If the water never appears, they fly off without breeding, set on returning and trying again the following spring at the only colony they've nested at for their entire lives.

Like Mandt’s Black Guillemots, Coats Island murres have seen Arctic cod vanish from their summer diets. Since the mid-1990s, Thick-billed Murre parents at Coats Island instead stuff their chicks with capelin, a warmer-water fish, “which they do perfectly well on, but it seems like they don’t do quite as well,” says Tony Gaston, senior research scientist emeritus with Environment and Climate Change Canada who studied Coats Island murres for 30 years. “The chicks are not growing as fast.”

Farther north, Thick-billed Murres stand to benefit from changes in Arctic ice. At Prince Leopold Island, a colony 800 miles north of Coats Island, ice occasionally perseveres throughout the cold summer and prevents the birds from breeding at all. That will change as the Arctic warms. “As those years become less frequent, they will have more breeding years,” Gaston says. “So things are probably improving for the birds in the high Arctic.”

Such improvements could apply to many bird species in the high Arctic—for a time, at least. The slow decline of well-studied nesting colonies might look like loss, but for the most part, populations are merely shifting. Many species will simply move north to stay within their preferred climates—a strategy that can only work for so long. An iceless Arctic summer is expected by 2060, and the birds can’t move north forever. “Eventually it falls off the edge of the world,” Gaston says. “But I don’t worry about Thick-billed Murres. I think they’ll hang on long after we’re gone.” 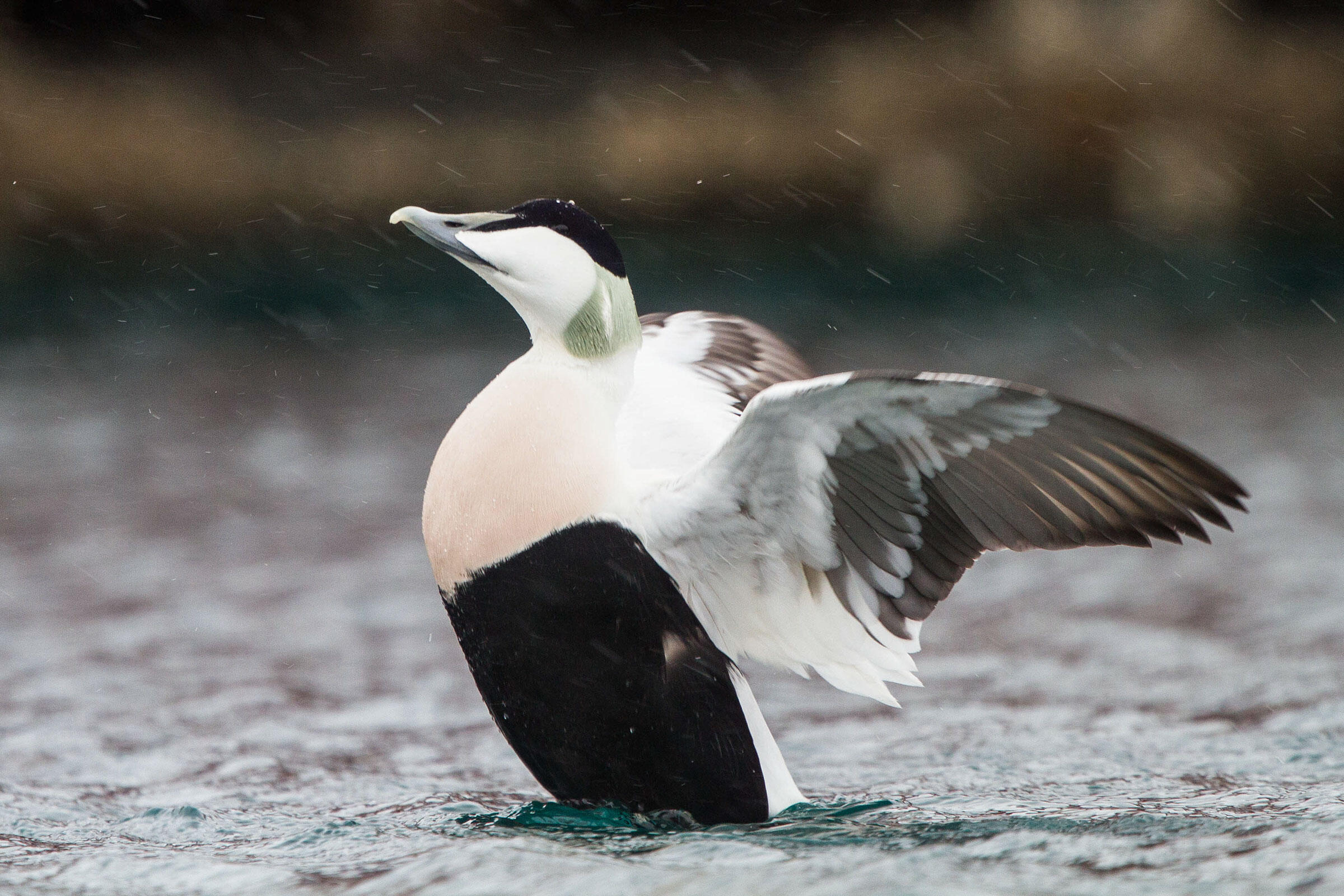 Common Eiders are facing a new kind of predator: polar bears after their eggs and chicks. Photo: Ron Knight/Flickr (CC BY 2.0)

Unlike colony-nesting seabirds, Common Eiders don’t deliver food to their chicks—they bring the chicks to the food. Just a few days after hatching, eider ducklings follow their parents into open water so they can dive for mollusks on the seafloor. Even after feasting all summer, tragedy can strike during particularly cold winters. When the birds’ feeding areas freeze over, thousands of eiders have little choice but to crowd into the remaining small patches of open water. Beneath that water, food is quickly depleted, and when no other feeding areas are available, Common Eider populations can starve en masse. The loss of Arctic ice is expected to benefit their population: The less ice and the more water available, the better.

However, declining ice also means eider colonies will see more polar bears. The Arctic predator typically uses the sea ice edge as a platform to hunt seals, but the ice's early retreat leaves the bears with less time to hunt big prey. As a result, polar bears have resorted to scavenging for less nutritious food on land, which includes bird eggs. Polar bear visits to the biggest Common Eider colony in the Canadian Arctic increased sevenfold between 1997 and 2012, and at smaller colonies, they’ll devour nearly every egg and chick.

Polar bears gladly raid any seabird colonies within reach, including Thick-billed Murres at Coats Island and Mandt’s Black Guillemots on Cooper Island. Gaston’s intensive monitoring of birds at Coats Island has ended after 30 years because the bears are too dangerous. “We can’t risk relatively inexperienced students in this kind of situation,” he says.

While the bears do more damage to colonies of ground-nesting species like Common Eiders, those birds may prove to be more adaptable. They’re already spreading out within their colonies in Hudson Bay and moving closer to the safety of human settlement—something murres and guillemots are unlikely to do. Those bird species instinctively nest in the same colony year after year. But their chicks, once grown, may take note of the bears and move elsewhere. Gaston thinks first-time murre parents born on Coats Island are already relocating farther north. “What evidence we have suggests that the colony has started to diminish,” he says, and he mostly blames the bears for that.