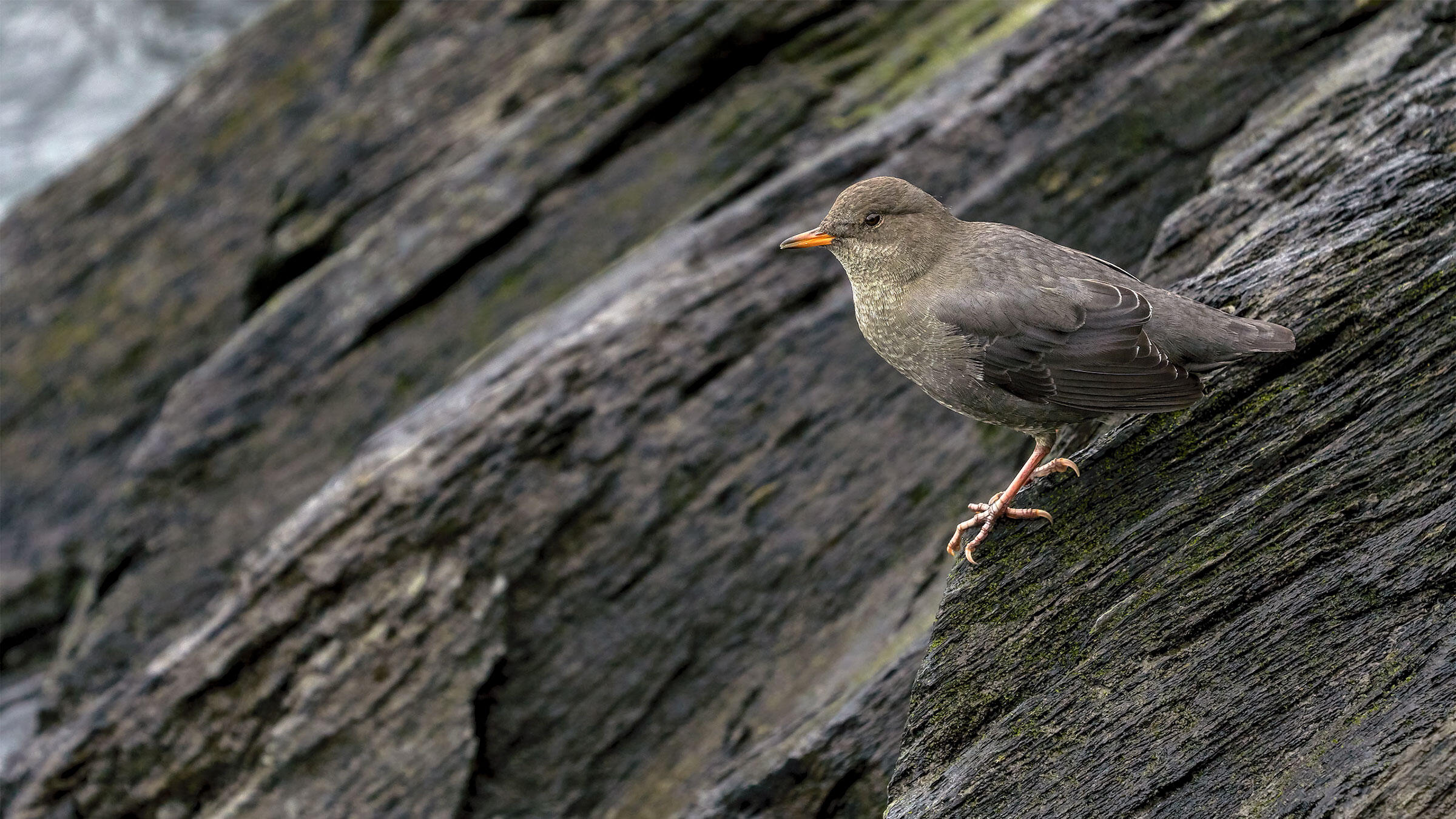 Do You Know the Other Way Birds Migrate?

Some species change locales by merely moving between higher and lower elevations. Here are four examples of altitudinal migrants in the U.S.

Birds are movers. Many embark on incredible, high-risk journeys to complete their lifecycles, from the 60-hour non-stop flights of the Blackpoll Warbler to the Pacific Ocean-crossing Bar-tailed Godwit. But while some species are winging it to another continent, other birds raise their young, find food, and escape bad weather by moving down or up in altitude. This behavior—when species predictably change their elevation between their breeding and non-breeding territory—is known as altitudinal migration. These pilgrimages don’t span continents, but birds travelling to lower altitudes can still experience drastic changes to their environment, with important consequences for conservation.

Understanding these journeys is increasingly important because climate change threatens mountaintops. The common logic goes that when warmer temperatures creep up mountain slopes, montane habitats and the birds that rely on them will follow to stay cool. But because mountains only go so high, wildlife can only go so far before reaching the peak—at which point there’s nowhere else to go. There’s still little known about how altitudinal migrants might react to these changes, but Boyle is hopeful that her list will encourage future study about this little-known phenomenon to improve our ability to conserve altitudinal migrants.

Here are a few species we do know about.

The  Santa Catalina Mountains located in the southeastern corner of Arizona rise from a sea of desert to over 9,000 feet. While the peaks can catch significant snowfall in the winter (enough to host a ski resort), the mountain range’s base is home to Saguaro and prickly pear cactus. This steep gradient provides an astounding array of habitats over a distance of a dozen miles. Somewhere in the middle, above 6,000 feet, live Yellow-eyed Juncos—approachable, twittering seed-eaters with lucid yellow eyes.

In 2011, Carl Lundblad was beginning his master’s degree at the University of Arizona when he noticed Yellow-eyed Juncos sporadically appearing way down in the desert. He realized that the birds’ movements up and down the mountains presented an awesome opportunity to study altitudinal migration in what was practically his backyard. For three summers and two winters, Lundblad’s team banded and tracked more than 900 individual juncos and their nests at five altitudes along the road leading to the summit of Mount Lemmon, the Santa Catalinas’ highest peak. They found that juncos living at higher elevations, where winter brings cold and snow for months, were more migratory, moving downslope when winter arrived.

However, abandoning those high-elevation breeding sites in winter comes with a cost: Lundblad’s data shows that nestlings grow faster and are safer from predators at higher elevations. As a result, competition for that prime habitat is fierce, and tough juncos with good upslope breeding territories will stick around to defend them when it turns cold. Even the toughest birds migrate downslope with heavy snow, though, because no junco can dig seeds out of deep drifts. As soon as the snow melts enough for them to uncover their food, the most territorial birds return upslope to continue playing king of the mountain.

Greater Sage-Grouse are best known for gathering at leks, communal breeding sites where groups of males heave bulbous chest-sacs and erect spiky tail-feathers in hopes of attracting a mate. But decades of research have shown that there’s more to healthy Greater Sage-Grouse habitat than the lek, and in much of their range, grouse will travel up and down thousands of feet to survive their harsh environment.

Jack Connelly, a former employee of Idaho’s Department of Fish and Game, says that in early summer, after they breed, Greater Sage-Grouse migrate thousands of feet up mountain valleys so they can feed on growing plants that at lower elevations are past their prime. Sometimes known as “riding the green wave,” moving upslope is particularly important for grouse mothers, which must find abundant forbs and insects to satisfy chicks’ appetites. Mothers with chicks often travel on foot for dozens of miles to get there.

In September or October, Greater Sage-Grouse move back downhill. Using a combination of flying and walking, movements towards their winter grounds are food- and weather-dependent. During winter, the grouse eat only sagebrush leaves and buds. They must find areas where, in extreme weather, sagebrush bushes protrude from snow so that they can access the food and cover they need to survive. Golden Eagles, says Connelly, are a particular threat if grouse are caught in open areas with no cover.

The Greater Sage-Grouse’s propensity to travel to higher and lower elevations has real conservation consequences. Connelly says that on their winter and breeding grounds, Greater Sage-Grouse require wild, uninterrupted lands that can span the size of Rhode Island and are extremely sensitive to human disturbance. On their summer grounds, grouse seem to be more flexible on the types of habitat they use. What’s critical, says Connelly, is that these two components of their habitat remain connected and safe for traveling grouse because the birds return to the same places year after year.

The American Dipper is special by any standard. Unlike other North American songbirds, this aquanaut swims and dives underwater to capture insects, using its wings as paddles to propel itself. Some dippers nest downstream and downslope, breeding along the banks of low, slow rivers; if there’s enough food, they’ll stay there year-round. Others, though, nest in mountains above 10,000 feet. Those high-elevation dippers move downslope in winter when streams freeze over or otherwise can’t support enough bugs to feed the active birds.

David Green of Simon Fraser University wanted to know why some dippers migrate and others remain at low elevations year-round. After banding hundreds of birds along the Chilliwack River and its tributaries in the Cascade Mountains east of Vancouver, British Columbia, Green’s team found that dippers at higher elevations didn’t breed as successfully as their downstream counterparts. Downstream chicks were fatter—probably because they have access to salmon eggs and fry, a rich food source—which increased their chances of surviving their first year. Green thinks that it’s the competition for better habitats downslope that pushes dippers to higher elevations—and therefore to a migratory lifestyle. Once American Dippers become migratory, they stay that way: of more than 600 birds that Green’s team tracked, only seven changed their migratory inclinations.

Think of the Prairie Falcon as the arid west’s response to the Peregrine. A fierce and agile predator that specializes on hunting small mammals and birds in open country, Prairie Falcons roam the wide-open spaces of North America. These falcons are adapted to the harsh conditions and periodic droughts of the desert west, and one way the species overcomes these trying conditions is by searching for prey at different altitudes (and latitudes) throughout the year.

Ornithologist Karen Steenhof, who has researched raptors for more than 40 years, used satellite tracking to study Prairie Falcons breeding in Snake River Birds of Prey National Conservation Area in Idaho. While the falcons are known to be wanderers, Steenhof’s research suggests they don’t move randomly. The tagged birds undertook a roughly circular migration every year, often travelling thousands of miles.

After Prairie Falcons breed and summer advances in the high deserts of Idaho, ground squirrels, their favorite prey, move underground to beat the heat in the summertime equivalent of hibernation. To find enough to eat, the birds cross the continental divide, moving up in elevation to the cooler Canadian Rockies and above 6,000 feet in the Laramie Plains of Wyoming where ground squirrels are still active. Towards the end of summer, falcons’ high-elevation prey begin to hibernate, and so once again the birds hit the wind. For the winter, the majority of birds that Steenhof tracked either returned to where they were born or traveled south, and downhill, to the Great Plains all the way to the Texas Panhandle. It’s a tradeoff: Falcons wintering in the southern Great Plains might benefit from a milder winter but face a longer journey back to their breeding grounds, whereas locally wintering birds are able to secure their breeding territories first.

If Idaho’s winters continue to grow warmer, the advantages of wintering in the distant prairies of Texas and Kansas might disappear altogether, says Steenhof. Where else the falcons might show up as the climate changes, nobody knows.