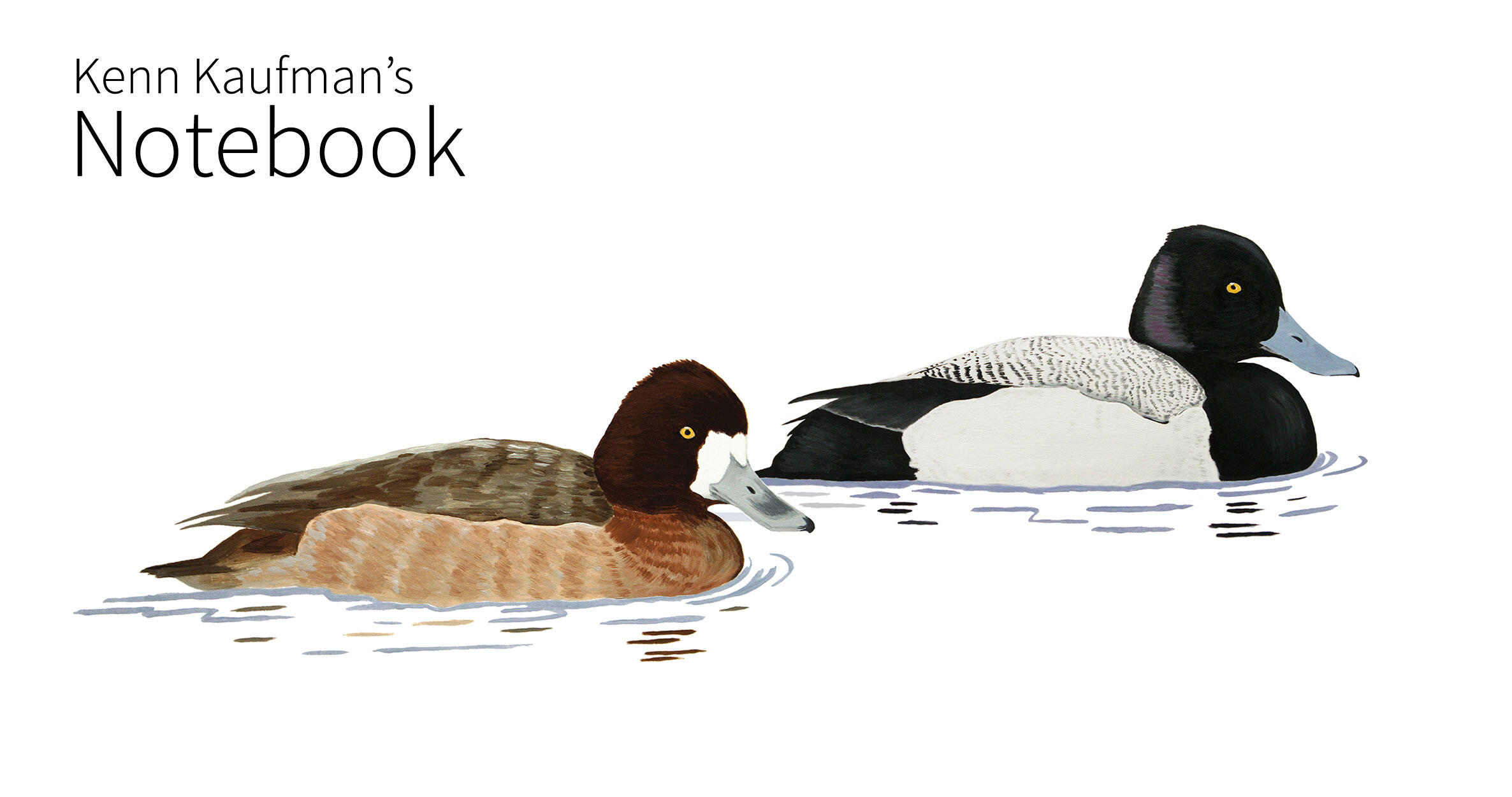 Audubon and his rival, Alexander Wilson, disagreed about the habits of scaup ducks. But that's because they were describing two different birds.

It was a red-letter day for John James Audubon whenever he had the chance to correct a mistake made by Alexander Wilson.

For years, Audubon had felt he was working in Wilson’s shadow. Wilson had published his American Ornithology in nine volumes from 1808 to 1814, and soon had been lionized as North America’s foremost expert on birds. At the time, Audubon was still a shopkeeper and amateur bird painter. He wouldn’t launch into a serious attempt to produce his own masterwork until about 1820.

By the time Audubon really got going on his own project, Wilson had been dead for several years. Wilson’s friends, however, were still tending the flame of the ornithologist’s fame, and they took a dislike to the brash upstart Audubon. This was especially true in Philadelphia, where the scientific community included some of Wilson’s biggest fans. When Audubon visited the city in 1824 to begin looking for a publisher for his work, he met nothing but resistance. Opposition was fierce from Wilson’s loyal friends. Eventually, Audubon was forced to travel to England to find a publisher for his massive multi-volume set of paintings, Birds of America (1827-1838), and his series of bird life-history studies, the Ornithological Biography (1831-1839).

So it’s understandable if Audubon continued to feel a bit of resentment toward the late Alexander Wilson. The man’s name is mentioned repeatedly in the Ornithological Biography, to either confirm or contradict some point from the earlier work. Audubon’s text is always respectful, but it’s hard to miss the underlying tone of glee when he catches Wilson in some mistake.

Consider his account of the bird he called the Scaup Duck. Right away, in the first sentence, he takes a swipe at his rival: “The opinion, derived from WILSON'S account of the Scaup Duck, that it is met with only along our sea coasts, in bays, or in the mouths of rivers, as far as the tide extends, is incorrect. Had WILSON resided in the Western Country, or seen our large lakes and broad rivers during late autumn, winter, or early spring, he would have had ample opportunities of observing thousands of this species, on the Ohio, the Missouri, and the Mississippi, from Pittsburg to New Orleans.”

It’s not surprising that both Wilson and Audubon would be familiar with this duck. The scaup was common in northern Europe as well as in North America. It had been described to science by Carolus Linnaeus, the father of modern nomenclature, in 1761 under the name Anas Marila. (By the time Audubon was writing in the 1830s it was called Fuligula Marila, and today it’s officially Aythya marila.) Big winter flocks of scaup are easy to recognize, even at a great distance: males are famously “black at both ends and white in the middle,” as field guide authors have been writing for the last century, while females are brown with a white border around the bill.

In other words, scaup always have been easy to spot. So why did Wilson and Audubon have different impressions about where the birds lived? Why did Wilson emphasize their winter range on the coast, while Audubon was more impressed by the flocks he saw on rivers in the interior?

Well, these two may have been the first to experience a phenomenon of modern birding. There’s a standing joke among active birders about what we call “the two-bird theory.” Here’s an example of how it works: Two people are out birding and they spot something interesting . . .

Second birder: “Are you crazy? Look at the wing pattern! It’s a [species Y] all the way.”

And so on. The argument continues until the birders finally realize they are looking at two different birds.

John James Audubon and Alexander Wilson, in separate accounts written decades apart, may have experienced the ultimate example of the two-bird theory. Because, as it turns out, their “Scaup Duck” is actually two different birds, Greater Scaup and Lesser Scaup. The latter species wasn’t even described to science until 1838—after Wilson had passed away, and after Audubon had completed his paintings for Birds of America. The two men had no reason to suspect that they might be looking at different kinds of scaup.

But apparently they were. Based in the Philadelphia area, Wilson spent more time along the coast, and Greater Scaup is most common in winter on coastal bays. Lesser Scaup is abundant in winter on lakes and rivers in the interior, where Audubon lived for most of his active career. These two species of ducks are so similar that it takes a close look to see the differences, especially when they’re not side by side.

In Audubon’s painting of “Scaup Duck,” he uses the scientific name of the Greater Scaup. But because he painted with such attention to detail, we can be sure the portrait was based on a pair of Lesser Scaup, a bird that wasn’t officially recognized at the time. His text, also, is a better fit with Lesser Scaup. In Wilson’s work, by comparison, there’s one small drawing of a scaup on the same page with several other ducks. There’s not enough detail in his illustration to say which kind it is. But in his text, discussing the birds wintering on salt water, it’s pretty clear that he was mostly seeing Greater Scaup. 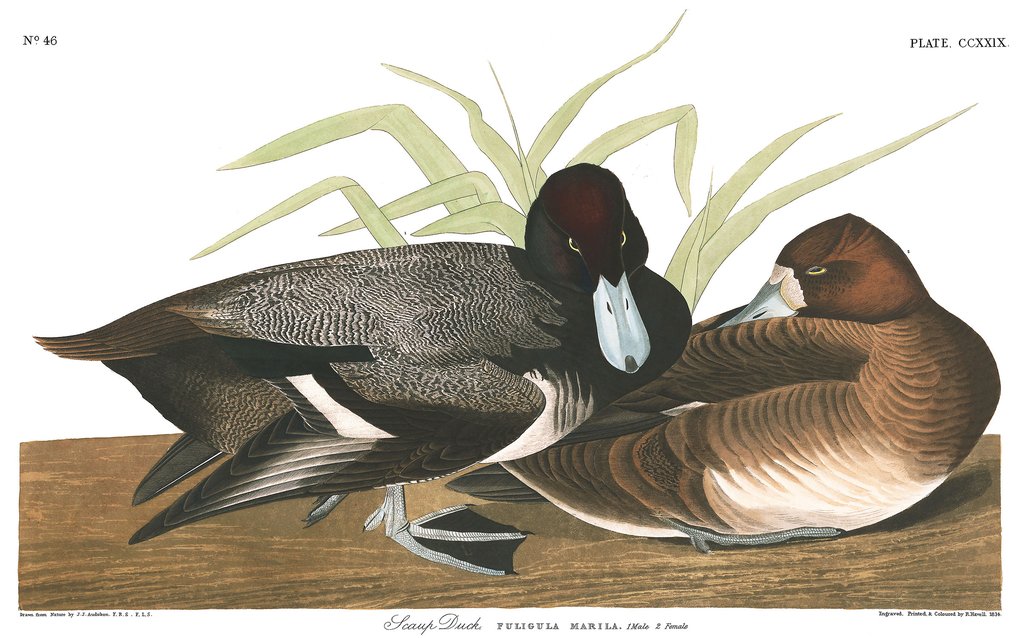 Incidentally, even the person who officially discovered and described the Lesser Scaup was confused by it. In 1838, Thomas C. Eyton published a monograph on the ducks of the world, and in it he described Fuligula affinis as the “American Scaup.” He believed that the other species, the slightly larger one, lived only in Europe, and that this new bird replaced it on this side of the Atlantic. Of course, we now know that both are common in North America, with the Greater Scaup also occurring across Europe and Asia.

Looking back, it all seems clear in hindsight, and we might wonder why people were confused for so long. But we should give more credit to the pioneers of ornithology who went out with no field guides, no binoculars, and no idea how many species might be out there, and started exploring all these mysteries. Even though Audubon and Wilson disagreed about scaup, each of them was right in his own way. And through their disagreement they laid the foundation for the two-bird theory, a tradition that birders still carry on today.