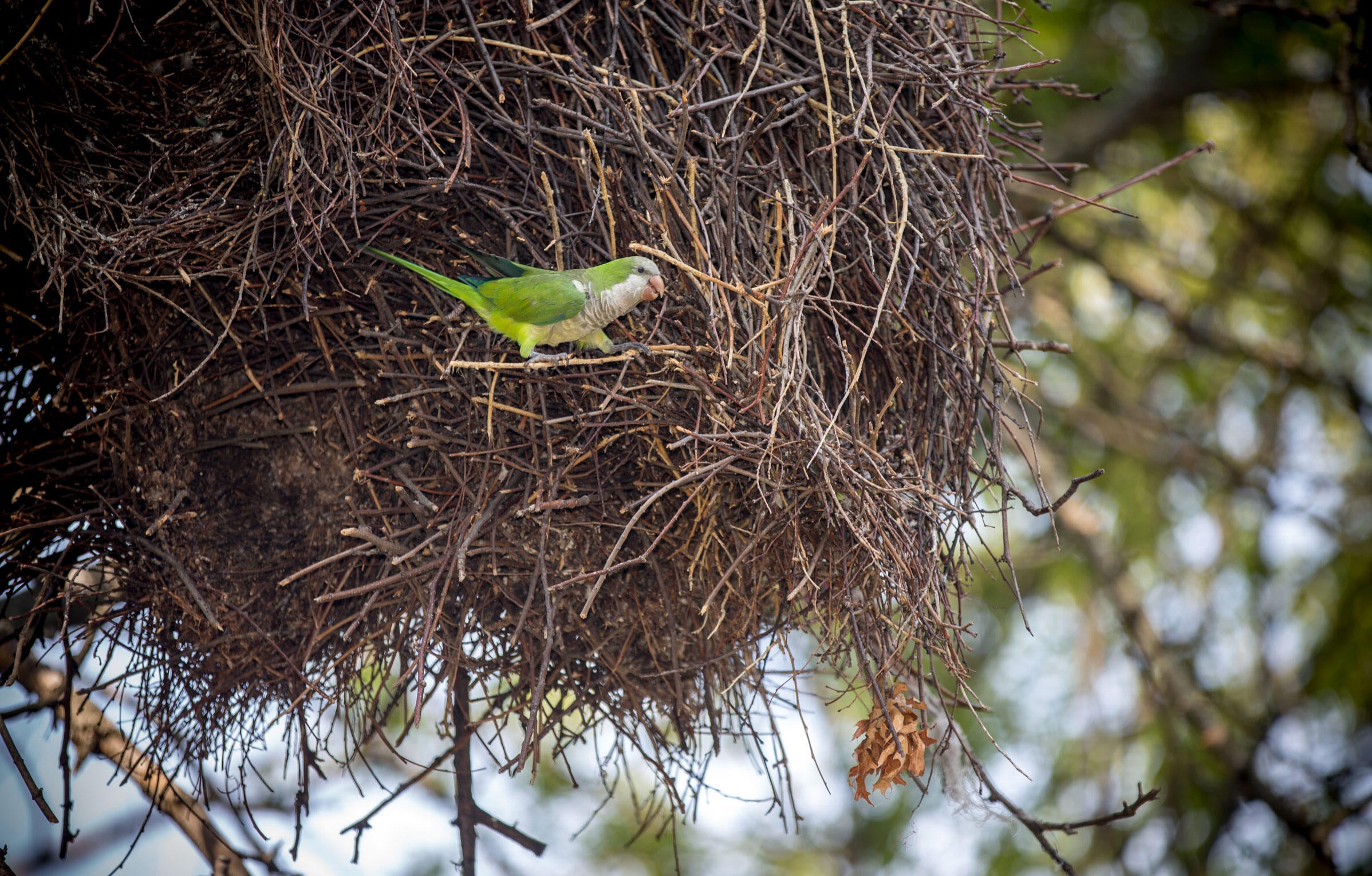 Exotic Parrot Colonies Are Flourishing Across the Country

From Los Angeles to Miami, feral parrots have become a common sight. Are they invasive pests, or a conservation boon? 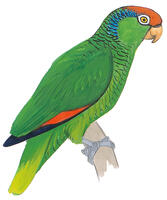 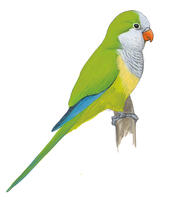 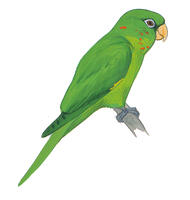 On a cold, windy day in Chicago eight years ago, Jennifer Uehling strolled through Hyde Park, a picturesque neighborhood known for its bookstores, museums, and grand historical homes. The scenery was hardly tropical, but an exotic element cut through the drone of traffic along Stony Island Avenue that day.

“There was this loud squawking,” says Uehling, a graduate student in evolutionary ecology at Cornell University. Zooming over her head were nearly a dozen vibrant green Monk Parakeets. Bewildered, Uehling was sure her eyes were playing tricks on her. "A bunch of parrots was the last thing I expected to see roaming around in the middle of Chicago.”

A century after  the extinction of the Carolina Parakeet—the United States' only native parrot, which likely made appearances as far north as Chicago—urban and rural areas across the country now host another green parrot. Monk Parakeets, originally from South America, are braving the snow in New York and building nests on power lines in Miami. In 43 states, they can be seen perching on bird feeders, nesting on palm trees and telephone poles, and flocking together near beaches.

The proliferation of parrots throughout the country today can be connected to the rising demand for exotic, eye-catching pets half a century ago. By the 1970s, thousands of wild-caught parrots had been imported into the United States from across the globe—and some of these captives escaped or were freed by their owners. Today's flourishing introduced populations are descendants of these pet parrots, according to Stephen Pruett-Jones, an ornithologist at the University of Chicago.“The more birds are imported, the more birds are likely to escape or be released,” Pruett-Jones says. “It has only taken a few decades for them to show up almost everywhere in the United States.”

Foreign parrots are scattered far and wide, but no one had ever mapped out which species live where or whether populations are consistently breeding. After her surprise encounter in Chicago, Uehling decided to take the project on herself. "Given the increasing numbers of some species, it is important to keep track of where they are,” she says. This can give researchers a clearer idea of their impact and how to potentially manage the parrots: Namely, how big a threat are they to native wildlife, and could they be key to conserving endangered populations back home?

Uehling and Pruett-Jones assembled almost 120,000 unique parrot sightings between 2002 and 2016 from the Cornell Lab of Ornithology's eBird and Audubon's Christmas Bird Count, both community science projects that rely on user reports. Their comprehensive list, published in April in the Journal of Ornithology, included 56 parrot species spotted in 43 states; 25 of those species are actively breeding. The Monk Parakeet, Red-crowned Amazon, and Nanday Parakeet were most frequently seen, accounting for 61 percent of all sightings—not too surprising considering that these species live in major cities like New York, Los Angeles, Miami, and Chicago.

Florida, California, and Texas took the lead in total parrot sightings; all 25 breeding species occur in these subtropical states. The birds nest in trees with large cavities such as palms, eucalyptus, and oak trees, and the balmy weather is ideal for growing fruit trees and ornamental flowers in backyards and parks. Aside from being popular among gardeners, these exotic plants are also a rich food source for parrots. “If it weren’t for the irrigation and the growth of tropical plants, we wouldn’t have much in the way of parrot populations at all,” Garrett says.

In south Florida, residents enjoy backyard visits from Red-masked Conures and Blue-and-Yellow Macaws. The birds “eat anything with an edible fruit, flower, or shoot,” says Paul Reillo, director of the Tropical Conservation Institute at Florida International University in Loxahatchee, who tracks parrot populations across the state at the Rare Species Conservatory Foundation. He says that many people celebrate the parrots as an integral part of Florida’s vibrant biodiversity even if they aren't native. “They offer a beautiful and captivating glimpse of the tropics,” Reillo says. Some residents actively encourage the visitors by installing parrot nest boxes in their gardens, and many areas, such as Palm Beach, are designated bird sanctuaries, even for non-native species.

While the exotic arrivals have been enthusiastically welcomed by many, they can be seen as a nuisance to others.

But while the exotic arrivals have been enthusiastically welcomed by many, they can be seen as a nuisance to others. And along with their potential impact on native species, they also present their own conservation questions and quandaries.

Florida utility workers, for instance, are tasked with knocking down giant, tangled nests to prevent power outages across the state. The culprit is the Monk Parakeet, the only parrot species in the world that builds its own nest from sticks and anything else it can find. In Florida, they construct their messy, communal homes in power sub-stations, on top of electrical transformers, and on power lines. Their handiwork results in frequent power outages, with a 2008 study finding that Monk Parakeet nests had caused 198 power outages over five months, an upheaval that affected more than 10,000 people.

California doesn't have this problem; the Monk Parakeet was banned altogether in the 1970s because of its outsize damage to agriculture. “You can’t own them, you can’t possess them, you can’t transport them, and you can’t own their feathers,” Pruett-Jones says. Birds spotted by the Department of Fish and Wildlife are promptly confiscated and euthanized, he says.

Given the Monk Parakeet’s absence, other non-native parrots with less of a destructive streak have been able to flourish along California’s southern coast. The Red-crowned Amazon in particular has become as ubiquitous as the towering palm trees lining the streets in Los Angeles; it is endangered in its native range in Mexico. 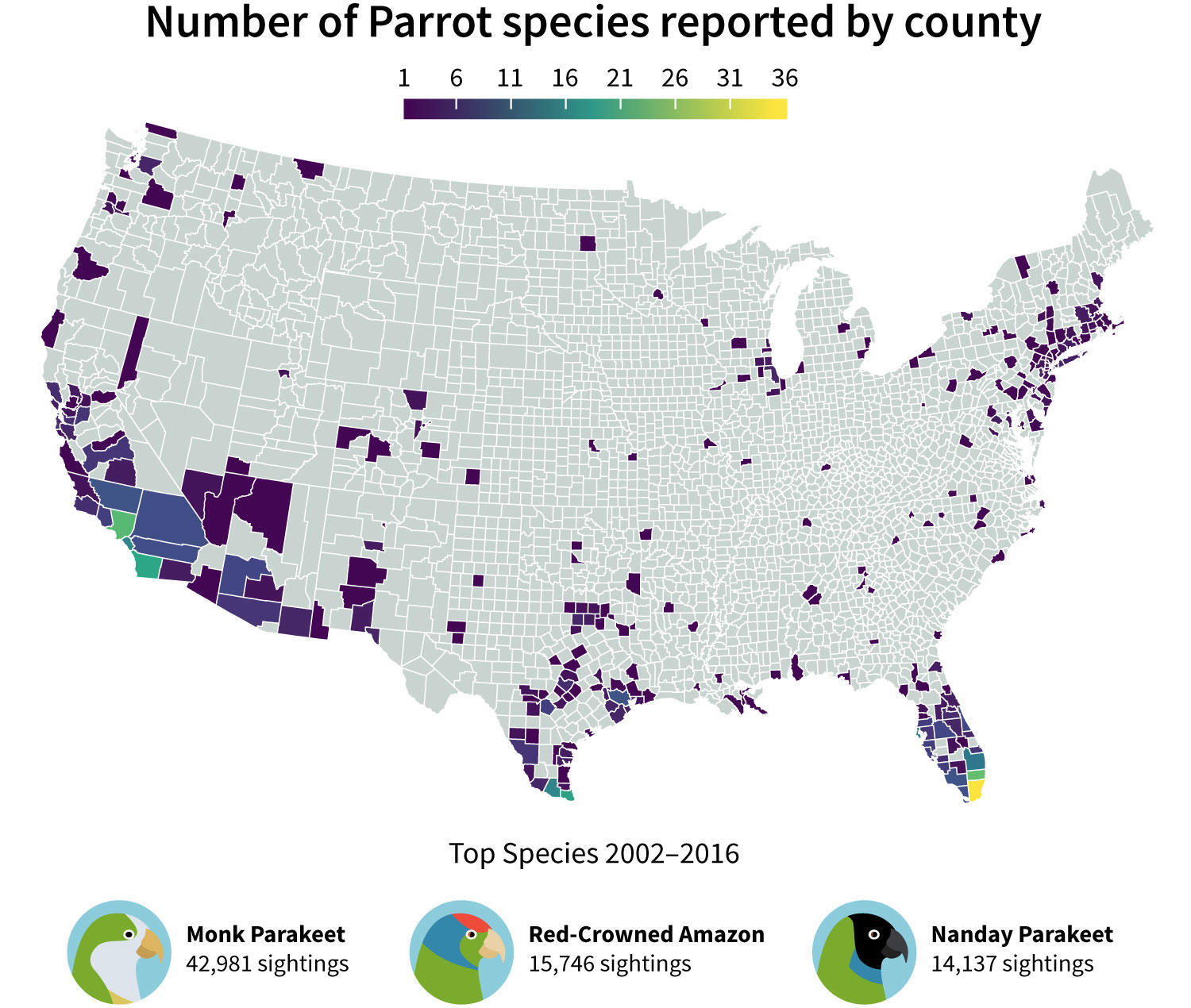 Its success stateside is exciting news to Sarah Mansfield, operations manager at the urban parrot rescue SoCal Parrot. Mansfield estimates that there are up to 2,000 Red-crowned Amazons between Los Angeles, Orange County, and San Diego. “That’s more than what’s found in Mexico, where their habitats are being cleared for farming and agriculture,” she says. What began as a tiny number of fugitives has grown into a feasible option for saving the species from extinction. If time runs out for the dwindling Mexican populations, the thriving urban groups in southern California may be the last hope for the parrots.

But there is a catch: Although the Red-crowned Amazon is protected under standard animal cruelty laws in California, authorities do not consider the species a priority for conservation due to their non-native, ‘escapee pet’ status.

“There are no specific laws in place to prevent people from disturbing their nests or messing with the birds in some way, because they are still seen as feral,” says Mansfield, who is currently working with the Diego City Council to gain the species protections.

The complications that come with being an introduced species are not as glaring in Texas, where the Red-crowned Amazon and Green Parakeet are considered native; some populations cross over from Mexico to the Rio Grande Valley on their own. Tony Henehan, a wildlife biologist at Texas Parks and Wildlife, says that even if some of the parrots are descendants of escaped pets, they are still seen as natives. “No other parrot on the continent has that distinction,” he says.

In 2008, the non-profit advocacy group Friends of the Animals submitted a petition to list the Red-crowned Amazon for protection under the Endangered Species Act (ESA). But because their populations are flourishing in cities and suburban areas, the U.S. Fish and Wildlife Service determined that the species does not warrant listing. For its part, the Mexican government has listed the parrots as endangered, and is enforcing stricter laws to reduce habitat destruction and the capture of wild parrots for the pet trade.

In the wake of the ESA decision, which was finalized in April, Henehan says that Texas Parks and Wildlife is considering management options for the Red-crowned Amazon at the state level. “These birds are becoming an integral part of the urban ecosystem, and they could serve as genetic reservoirs if anything drastic happens to populations back in their native range,” he says.

But to manage introduced parrot populations effectively in the United States, Pruett-Jones says that further research is needed to better understand how they are shaping their newly-acquired urban homes. One possibility is that they are competing with native birds for coveted nest cavities. While their impacts on native vegetation are largely unknown, they are likely to be minimal as suburban gardens and backyard feeders keep the birds well fed.

Spread the word. It’s the least you can do.
<h2 class="mailing-li