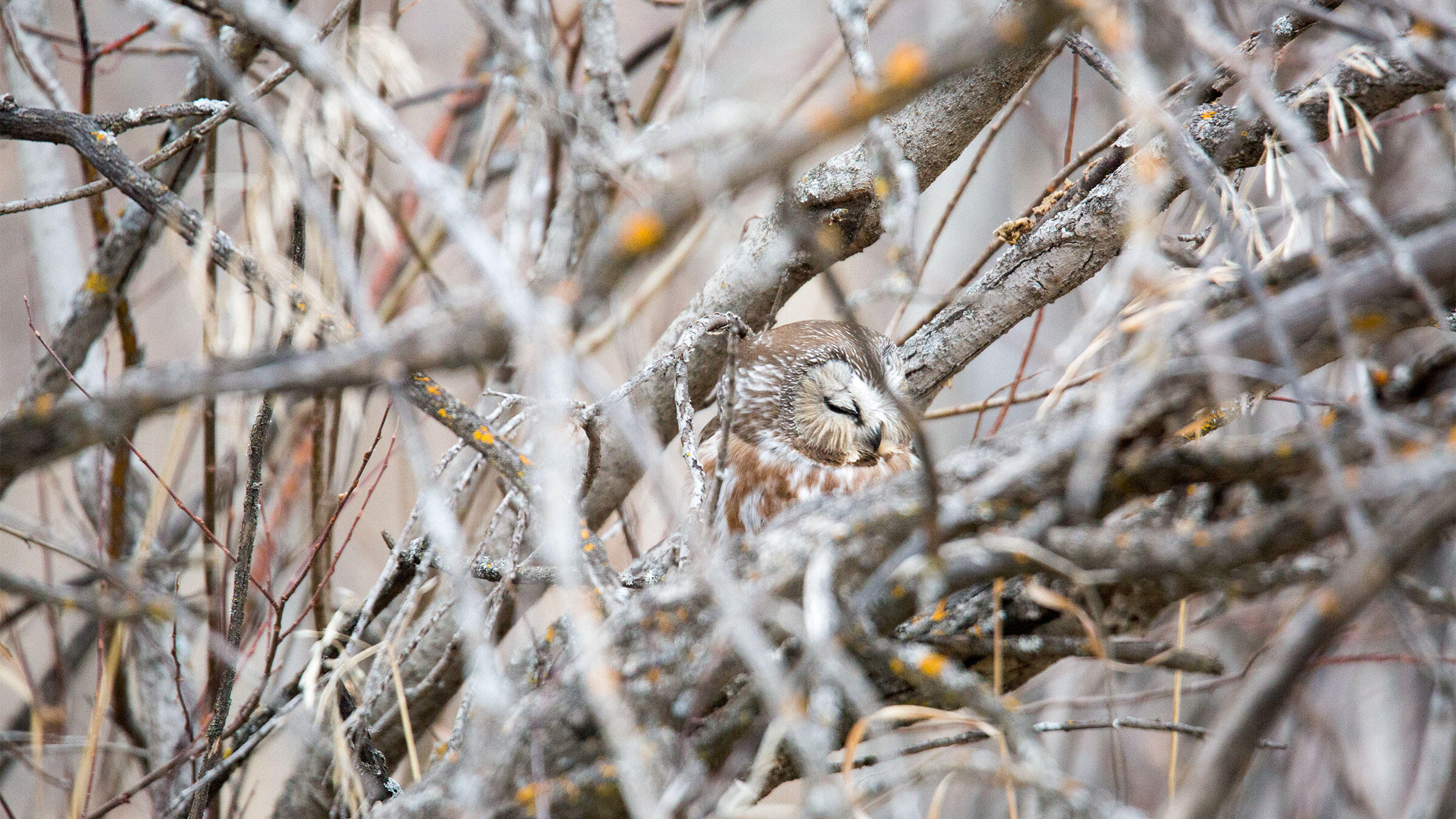 One of our smallest owl species, they can be found in suburbs and cities. 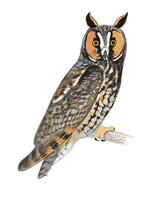 Whenever there’s a Northern Saw-whet Owl nearby, my “birdy senses” start to tingle. At least that’s how my husband describes it.

Not that I have superpowers—my secret is that I’m always searching. My ratio of looking for a saw-whet versus actually seeing one is good, but not amazing. For example, I checked three local parks in a week that should have them and didn’t spot any. Then I went to a meeting on the west end of Minneapolis and noticed one snoozing right outside of the building.

At about three ounces and eight inches, Northern Saw-whet Owls are one of the tiniest raptors in the United States. The cavity-dwelling birds often rely on old Northern Flicker and Pileated Woodpecker homes, swapping out their nest sites every year. In the colder months, they tend to be found in anything with good cover, mostly conifers but a thick tangle of shrubs like buckthorn will work, too. You’d think this would make them tough to find, but they’re surprisingly widespread across the upper half of the United States in winter, even around heavy human activity. Many of my saw-whet sightings are along well-traveled winter trails or heavily used city parks.

We’ve learned quite a bit about the Northern Saw-whet Owl in the last 15 years. Most notably, there’s a bigger migratory movement along the Great Lakes Region than scientists realized. There’s also a chance that a strong population exists in the central United States. So, if you live in Iowa or Ohio, get hyped. The upside to searching for Northern Saw-whet Owls is that instead of finding them you might find other species of owls as well.

Back to those “birdy senses” . . . I tend to follow a routine for saw-whets. Birding is unpredictable in general, and locating a quiet, well-camouflaged ball of fluff in the middle of the day is even more of a tossup. But owls have habits and needs, which means there are reliable sites you can test. Just be prepared. Once you lock eyes with a Northern Saw-Whet Owl, you’ll never be the same again.

Almost every wintering saw-whet owl I’ve ever found has been near water. The bird’s roost is almost always in sight of a creek, lake, pond, bog, or even the Mississippi River. There’s better prey diversity for them to hunt on the fringes of forests and the edges of freshwater bodies.

The first time I spotted a Northern Saw-whet Owl was in a cedar tree outside of the old public library in Minneapolis in the afternoon. Since then, I check every cedar I come across (I’ve surprised my fair share of Long-eared Owls in these trees, too.) Saw-whets will also hide out in pines and spruces or groups of conifers. Check the short and fat ones with extra care: Most of the owls that I find are eye level with me, and I’m only five feet tall. I rarely find small owls higher than 10 feet up.

Certain trees like oaks and beeches don’t lose all of their leaves in winter. You might discover a Northern Saw-whet Owls or red-morph Eastern Screech-Owls disguised among the dead leaves, usually midway along the branches.

Because the birds tend to be low, I try to slowly circle a suspect tree to avoid surprising or stressing the bird. Saw-whets tend not to move, but other owls will flush easily and make for easy targets for larger birds of prey.

I spent 10 years giving presentations with live birds of prey, so I’ve had plenty of experience with feces. Owl poop has a thick, chalky quality that makes it distinctive from the runny poop of crows and robins. (Saw-whet traces are much smaller than the long splashes left behind by a Great Horned Owl.) Since many owl species tend to sit in the same tree all day, they often leave several thick white droplets on the ground. Look up to see if there’s a trail on the branches, too—it might guide you right to a saw-whet.

Pellets—the non-digestible fur and bones from prey that raptors cough up—are another key sign. Because of their weaker stomach acids and tendency to swallow meals whole, owls produce bonier pellets than hawks. For mini birds like saw-whet owls, one mouse can equal two meals. They tend to eat the head of the prey at or near the kill site, and will then fly back to the roost with the rear end. As a result, pellets left under the roosting tree will have very few skulls.

I typically associate cavities with screech-owls, but I’ve also spied saw-whets lurking in tree crevices and Wood Duck boxes. (They will even roost on or below leafy squirrel nests on windy days.) I keep tabs of cavities at parks I regularly visit. If it’s a warmer winter day and the hole faces the sun, I’ll check it for a basking owl.

Rather than scaling a tree, just use your binoculars, scope, or camera lens to check the cavity. Be patient: Northern Saw-whet Owls sit very still, so it may take a few minutes to detect any movement. The birds typically don’t respond to calls from cavities outside of breeding season, so playing mobbing sounds during the day isn't just annoying, but also ineffective. You can also try staking out the cavity at sunset. Screech-owls will hang around at dusk, and saw-whets will pop out about 30 to 45 minutes after to hunt.

Use Other Birds as Informants

I owe about 50 percent of my saw-whet success to chickadees and nuthatches. All birds of prey are subject to mobbing (ever seen a murder of crows harass a roosting Great Horned Owl?). But as the size of the owl species shrinks, so do its opponents. Though saw-whets eat mostly small mammals, birds from kinglets to cardinals are fair game for their diet. That’s why flocks of chickadees and nuthatches sound the alarm when they come across a saw-whet in a foraging tree. The more dees a chickadee adds to its call, or the more agitated a nuthatch’s notes get, the more likely there’s an owl around.

Freebie Alert! Be prepared—make sure you can tell a saw-whet from a screech-owl by downloading our Audubon bird guide app today.