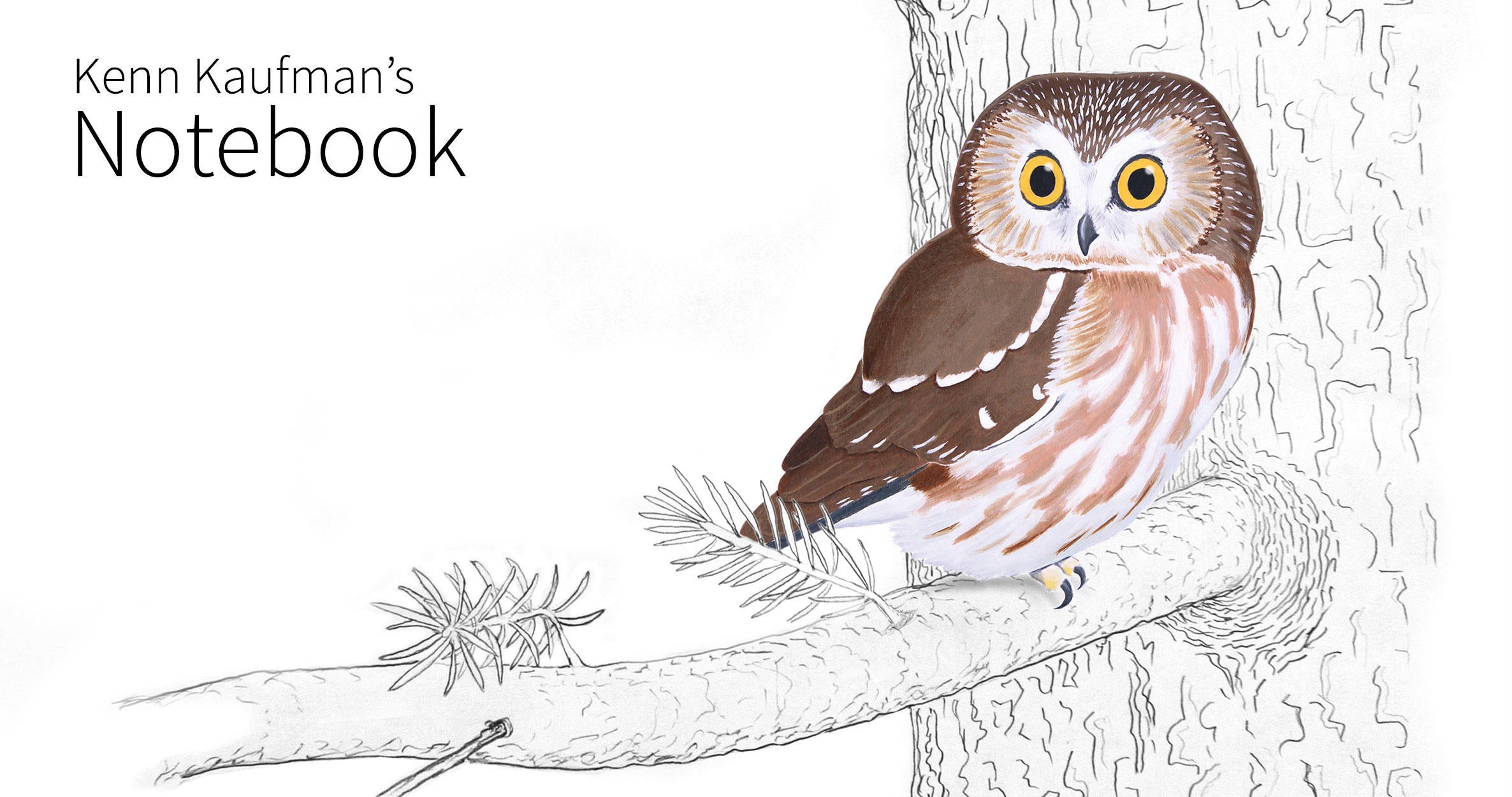 The rhythmic rasp of a whetstone sharpening a saw: at one time, most Americans probably would have recognized that sound. At one time, it was so familiar that you could have used it as a comparison for describing the voice of a certain small owl. The Northern Saw-whet Owl was named during that era, and today its name serves as a reminder of an earlier age.

John James Audubon, exploring eastern North America in the early 1800s, was familiar with this owl and its voice. He called it the Little Owl but mentioned that in Massachusetts it was known as the “Saw-whet,” and he even told a fanciful story about being fooled once when he heard the owl near a closed-up sawmill. Audubon undoubtedly knew this species (and painted it accurately), but he also seems to have confused it with other owls. Some of his descriptions of its nesting sites were accurate, but others were way off. He claimed to have found it breeding as far south as Louisiana, where it is actually among the rarest of visitors. Audubon concluded his account by writing, “In all parts of the United States where this species occurs it is a permanent resident.”

Throughout the 19th century, scientists who wrote about the Saw-whet mostly repeated the idea that it was a rare resident, not a migrant. In 1893, in a monograph about hawks and owls, ornithologist A.K. Fisher wrote: “The species is not migratory but is more or less of an irregular wanderer in its search for food during the fall and winter.”

That idea of irregular wandering was enough to account for any odd records, so it seemed reasonable to accept that the Saw-whet was non-migratory. But observations in the early 20th century around the Great Lakes started to change that view. In October 1903, a man on a steamer crossing Lake Huron reported that several small owls, fitting the Saw-whet’s description, came on board. In October 1906, a sudden storm apparently caught many migrating songbirds over Lake Huron, and among the dead birds washed up on shore were two dozen Saw-whets.

The best evidence was turned up by the great Canadian ornithologist, Percy Taverner, and his friend Bradshaw Swales, a leading birder from Michigan, in 1910. Taverner and Swales had already published a detailed study of birds of Point Pelee, Ontario, an amazing migration hotspot on the north shore of Lake Erie. At the time of publication they had no records of the Saw-whet there. But after their study was published, the remains of a few dead individuals, apparently killed by predators, were found on the point. Then on October 15, 1910, Taverner and Swales were looking for warblers in a red cedar thicket on Point Pelee when they found another dead owl and decided to search the trees for live ones.

“Within less than two hours,” they wrote, “and in a small part of the thickets, we discovered twelve of these owls.” The motionless, camouflaged birds were hard to spot: “They were all quiet and so near the color and contour of other natural forms as to be most inconspicuous.” The authors admitted they must have missed many owls, even in the small area they surveyed. Finally they concluded that “if the whole available territory was at that time as densely populated with Saw-whets as the small portion we worked, the total number of this rare species on the Point must have been very great.”

The kicker came on the following day, when Taverner and Swales returned with a friend who wanted to see the Saw-whets. They couldn’t find a single one. All the owls evidently had migrated away overnight.

Today it’s well understood that Northern Saw-whet Owls migrate. Not all of them do; some stay through winter even at the northern limits of the breeding range. But especially in eastern North America, moderate numbers move south every fall. Periodically—about once every four years—these little gnomes flood southward in huge numbers.

Most of what we know about these flights has come from banding operations, where dedicated researchers capture the owls in mist-nets strung up in the woods at night. During major flight years, a single banding station may capture more than 100 Saw-whets in a single night! So much for the idea that this species is rare and non-migratory. It makes more sense to say it’s a fairly common bird that is very easy to overlook.

Where I live in northwestern Ohio, I’m directly across Lake Erie from Point Pelee, Ontario, where Taverner and Swales made their big discovery 106 years ago. Here on the Ohio shore, if we spend enough time carefully searching the right habitats during the migration or winter seasons, we may eventually find a Saw-whet. But we never find even a small fraction of the numbers turned up by banding operations, so we know we’re missing the vast majority of owls around us. Perching motionless in dense cover, brown feathery lumps among the tangles, they undoubtedly watch us as we walk past. I’ve seen a few dozen Saw-whets in the wild, but probably thousands of them have seen me.

There’s one type of situation in which a Saw-whet Owl may be easier to see: when it winds up in a small city park or in plantings along a city street. This kind of thing happens surprisingly often. And who was the first to report on this? Why, of course, it was John James Audubon. Way back in the 1830s he wrote, “This species evinces a strong and curious propensity to visit the interior of our cities,” and went on to mention owls found in downtown Philadelphia, Baltimore, and Cincinnati. Although Audubon didn’t quite connect the dots to realize that these were migrating birds, his observations (as usual) pointed the way for later generations of birders.