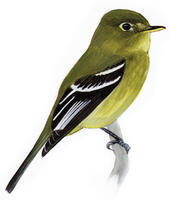 About the Birds: With their wide migratory breadth and diverse use of habitats, songbirds can be clear indicators of climate change impacts, both at a regional and localized scale. The Chestnut-sided Warbler, a beloved forest species, is projected to lose all of its existing breeding range in the United States and Canada and shift into a smaller territory much farther north.  The Hermit Warbler may be pushed to higher altitudes in its slim Pacific range along the coast and in the mountains. Orchard Orioles, meanwhile, may find new breeding territory as they expand farther into Canada and stop in southern Florida for the winter. Veeries and Wood Thrushes both prefer moist woodlands that could become increasingly scare with climate change. Audubon’s models show them moving into coniferous boreal forests as more than half of the area where they currently breed becomes unsuitable. Finally, the Yellow-bellied Flycatcher’s forecast shows it potentially swapping sphagnum bogs for the Arctic taiga in summer.

About the Artist: A multimedia artist from New York City, Cern has been crafting public pieces since childhood, initially through graffiti and eventually as a muralist, musician, and fine artist. He continues a mix of creative practices and development of various visual languages. His work has been shown internationally from MOCA in Los Angeles to Tehran. Most of the species featured in this mural may pass through Forest Park each year, a deliberate choice by Cern.