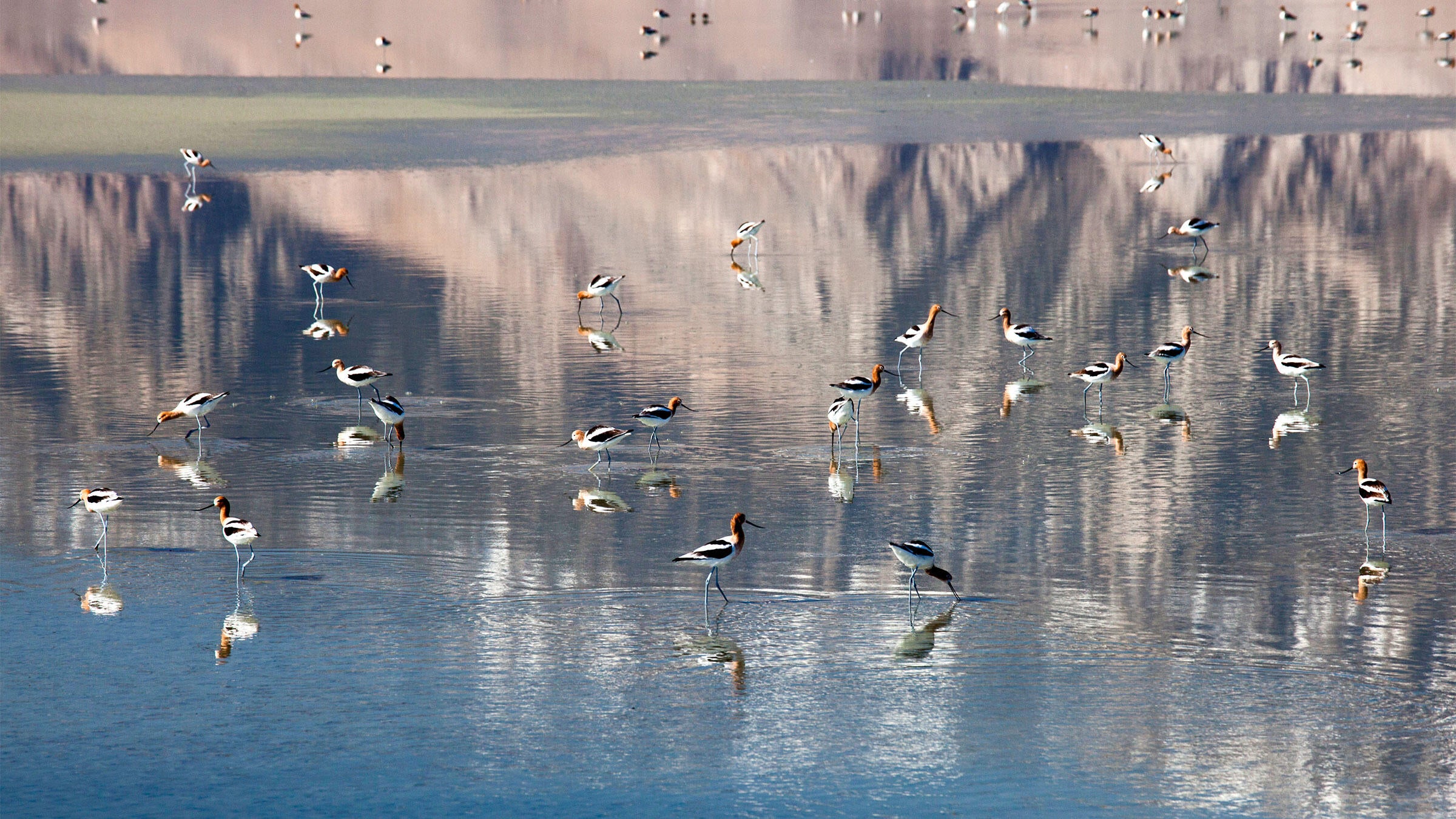 California's Owens Lake had all but disappeared by the 1990s. But once a multi-partner conservation effort got water routed back to the parched lakebed, birds like the American Avocet swiftly returned. Photo: Jim West/Alamy

Can the lessons learned from restoring California's Owens Lake help save other saline lakes?

It was duty more than hope that drove Mike Prather out to a corner of Owens Lake for the 1985 Christmas Bird Count. Once one of the most spectacular places for birds in California, it had been all but lifeless since 1927, when Los Angeles completely drained it by diverting its waters to slake the thirst of the burgeoning metropolis 200 miles to the south. With winter winds whipping the playa into choking dust, Prather had no expectation of adding anything to Audubon’s Eastern Sierra Chapter bird list.

To his astonishment, he found Western Sandpipers and other south-bound shorebirds fattening up in a secluded chain of small wetlands on the fringes of the lakebed. This discovery kindled a campaign that helped restore Owens Lake from a toxic dustbowl to an internationally recognized bird sanctuary.

Last month Owens joined the Western Hemisphere Shorebird Reserve Network, an exclusive group of 104 areas from the southern tip of South America to Alaska certified for their outstanding numbers of birds. Organized in the 1980s, the network aims to protect key habitats throughout the Americas for populations of shorebirds. The Owens designation—by unanimous vote—puts it among “the cream of the crop of special places for shorebirds,” Prather says.

Like Owens, saline lakes throughout the American West are threatened not only by water diversions but increasingly by effects of a warming, drying planet. A 2017 Audubon assessment found the scattered string of landlocked lakes, including the Great Salt Lake, and their associated wetlands among the most imperiled and irreplaceable ecosystems of the Intermountain West. These beacons for birds crossing an otherwise arid landscape are dimming. Most lakes are shrinking; some have nearly disappeared, the report found.

Adding Owens to the Western Hemisphere Shorebird Network provides no binding protections, but it coordinates conservation work there with efforts at lakes on two continents used by shorebirds during their marathon migrations. The strategy is to protect declining shorebird habitats before they are destroyed.

Few such habitats are more distressed than the Salton Sea. Formed in 1905 by a break in a canal carrying Colorado River water, the saline lake 160 miles southeast of Los Angeles lies in the footprint of the larger ancient Lake Cahuilla. It has served as a major nesting, wintering, and stopover site for millions of birds of more than 400 species.

Today the Eared Grebes are gone—“and there used to be millions of them,” says Andrea Jones, Audubon California’s director of bird conservation. Cormorants have also disappeared from the Salton Sea, and the American White Pelicans that once roosted in the mudflats now fly over without stopping. Like Owens Lake a decade ago, the receding waters are exposing dry shorelines where winds kick up clouds of dust, creating a major public health hazard.

Ironically, it was dust that led to recovery at Owens Lake. Beyond slivers of wetlands at the lake’s edge, the bird habitat was all but gone in the 1990s, when the Great Basin Air Pollution Control District began a series of lawsuits requiring Los Angeles to comply with state air standards. After years of resistance, the city eventually released some water onto the cracked lakebed. Migrating and nesting birds showed up immediately. By 2002 they were flying in by the thousands.

Once that habitat existed, Prather was determined to keep it. “Those birds had no protection into the future and that was unacceptable,” he tells me. It took a decade of working closely with LA officials to develop a management plan that controlled the dust and maintained bird habitat.

The key was looking at the entire lake and determining both the worst places for dust emissions and the best places for bird habitat. Prather, Jones from Audubon California, and LA officials worked as partners to find ways to put just enough water on the lake to control dust and retain minimal habitat. Applying water efficiently allowed LA to conserve more of it for municipal use. “That was the grand bargain—habitat with less water,” Prather says.

It’s a model with merit at the Salton Sea, says Frank Ruiz, Audubon’s program director there. Its shoreline has been receding even more rapidly since inputs from the Colorado River ended last year. And while the Salton Sea has its own unique challenges, managers can learn from the trials and errors at Owens, he says.

Having local engagement is critical to long-term success for both birds and the community.

One such lesson is to avoid piecemeal projects. After years of trying to put water here and abate dust there, Owens proved the value of crafting solutions that consider the lake as a whole, says Jones. Another is to involve the community. Prather provided an on-the-ground presence that brought local residents, organizations, and businesses into the management discussions. Ultimately they became part of the decisions. Having local engagement is critical to long-term success for both birds and the community, says Ruiz: “We are in a time when we can’t do conservation without community work.”

Like Owens Lake and the Salton Sea, each saline lake faces singular challenges. If the science and cooperation that produced the remarkable turn-around at Owens Lake can be applied to these declining habitats before they are destroyed, shorebirds may rebound to the robust numbers they once enjoyed for far less than the $2 billion Los Angeles spent to restore Owens Lake. Prather believes there are more birds at Owens now than at any time since Joseph Grinnell of UC Berkeley’s Museum of Natural History visited the area a century ago.

While American Avocets and Snowy Plovers are busy nesting in Owens' shallow waters and salty pools, most of the sandpipers and Whimbrels have moved on, flying north from one lake to another in a network of water bodies that stretches north to the Arctic and Bering Strait. As such, the restoration of Owens is about more than just reestablishing a single lake. It means providing migratory birds with another link in the complex chain of lakes and wetlands they depend on to move across this arid landscape. And to ensure their ultimate success, the whole system must be protected.

Audubon is nonprofit dedicated to saving birds and the places they need. You can support our conservation work by making a donation today.