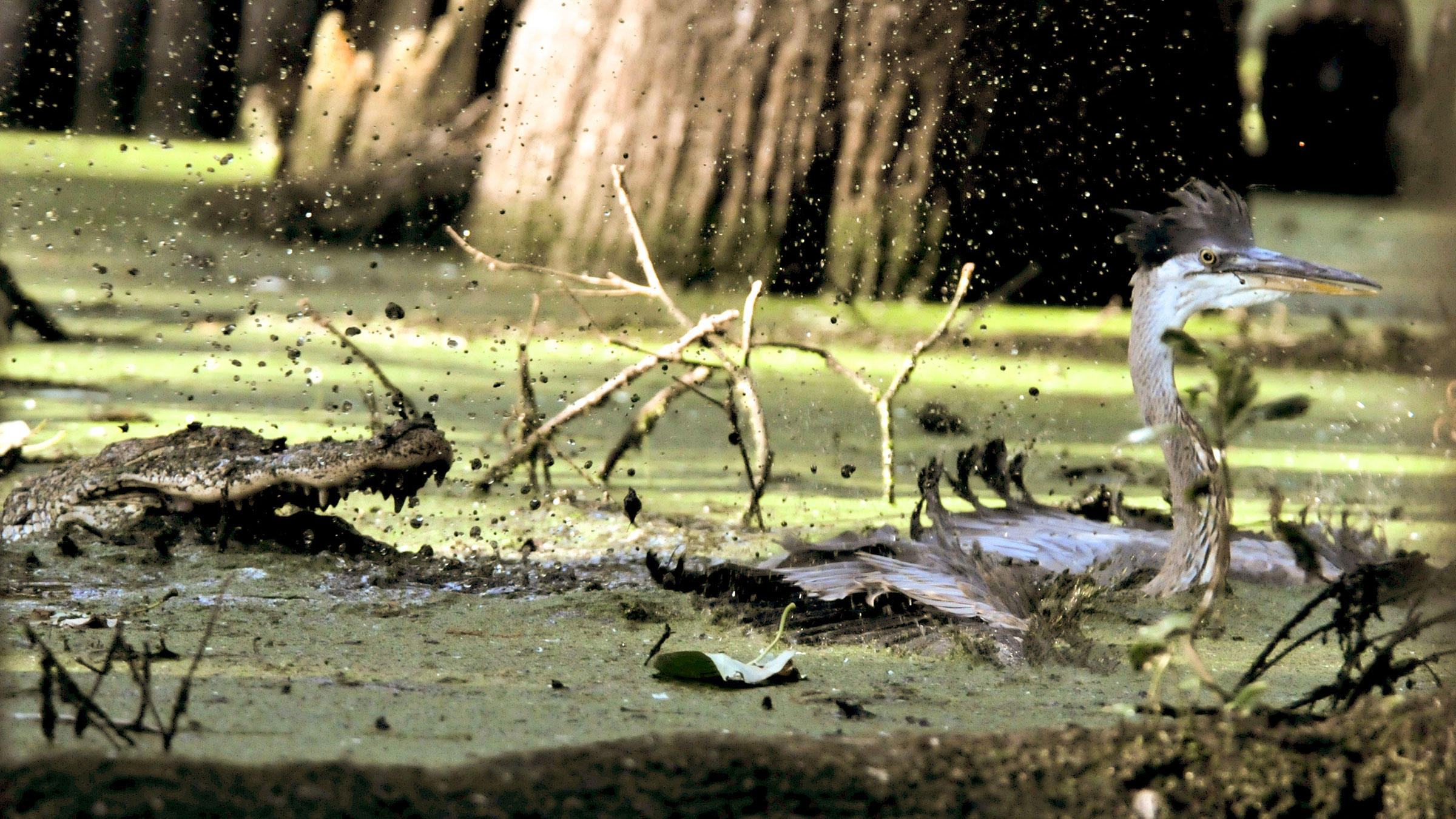 Hunting isn’t always about the thrill of the chase. In the Everglades, alligators have adopted a more laid-back strategy: sitting and waiting for dinner to drop out of the sky.

While it may seem contrary to the very definition of “predator,” a study published earlier this month in PLOS ONE found that American alligators are healthier when they hang out under the nests of birds such as Roseate Spoonbills and Little Blue Herons. “Most every single breeding female alligator in the Everglades could be sustained during the four-month dry season by dropped chicks alone,” lead researcher and University of Florida graduate student Lucas Nell told the Institute of Food and Agricultural Sciences.

It’s common for swamp-dwelling birds to nest above alligator-infested waters: The territory keeps animals like possums and raccoons from clambering up into nests and stealing eggs. The defensive ploy is one that birds use often. The European Fieldfare, for example, nests near Merlins, which are territorial falcons; Black-chinned Hummingbirds do the same with accipiter hawks. This is the first known case, however, where both predator and prey benefit.

For decades, ecologists have focused most of their attention on the negative relationships between birds and gators, says study coauthor Peter Frederick, a University of Florida ecology professor. “We’ve discovered that positive forces can be pretty forceful as well,” he says.

Typically, waterbirds produce more offspring than they’re able to feed and end up with one or two runts that won’t make it. These weaker chicks eventually get bumped into the swamp below. The fuzzy meals are small, but they’ve become essential to the gator population—especially in the Everglades’ dry season, when most birds are nesting and other food sources like snakes, turtles, and lizards become tricky to reach.

Detangling this symbiotic relationship wasn’t easy. The team used nooses and even their bare hands to catch (and release within an hour) 39 full-grown female alligators throughout the summers of 2013 and 2014. They drew blood samples and compared the body size of individuals living in parts of the Everglades surrounded by nesting birds to those from other areas.

The results showed that the female gators, which tend to stay in one place while feeding, were fatter when they lived below nesting birds. While most of those calories likely came from tumbling chicks, birds aren’t the only things dropping from nests. “It’s possible that [alligators] are getting some indirect benefit from the birds’ feces as well,” Frederick says. Bird poop may provide extra nutrients to the swamp, leading to more fish for the reptiles to eat.

Of course, not all of the Everglades gators have lost their spirited, predatory ways: The 11-foot beasts will sometimes slap their tails against tree trunks to coax live chicks straight out of the nest. It's the alligator version of apple picking—just way deadlier.