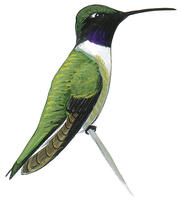 You know what they say about location and real estate. Hummingbird nests often appear in clusters, but for years researchers couldn’t figure out what attracted the birds to certain areas. Turned out the answer was, “good neighbors.”

Biologist Harold Greeney was doing fieldwork in Arizona in 2007 when he and his team realized that breeding hummingbirds often clustered around hawk nests. By 2009, Greeney and company were able to report that the hummers nesting close to hawks were actually more successful at raising chicks. Now, in a study published last week in Science Advances, they are unveiling research into exactly why that seems to be the case.

Hawks don’t prey on hummingbirds or their nests—there’s not enough meal in a hummer to be worth the effort, apparently. (“The hawk by weight is about 190 times the size of a hummingbird, so it’s basically the same reason that if you want to catch a fly, you don’t run after it,” said Greeney.) But not only are hawks not a threat—it seems they may actually protect hummingbirds from their predators, Mexican Jays.

We know that timid species often hang out near more aggressive species for protection. Sometimes they’re trying to avoid one predator in particular. Geese, for example, sometimes nest near Snowy Owls because the owls eat the foxes that would otherwise eat the geese. But it’s often tricky to figure out which predator acts as the “middleman” in such a situation—who, exactly, is hiding from whom? So the researchers looked at several hummingbird predators, including squirrels, snakes, and chipmunks, before settling on Mexican Jays as the likeliest suspect (they’d caught the jays on camera pillaging hummingbird nests).

When they cross-referenced the GPS coordinates of hummingbird and hawk nests with the locations where jays were foraging, they expected to see “a big circle around the hawk where the jays just never went,” said Greeney. Instead they discovered that while jays do forage close to hawk nests, they do so at higher altitudes than normal, staying above hawks that typically hunt from above then swoop down on their prey. Greeney found that hummingbirds build their nests under the hawks’, in a “cone-shaped space where jays never go, right around the hawks.”

The hummingbirds’ strategy seems to work. And their nesting success depended not just on proximity to hawk nests but also on whether the nest was within the jay-free cone Greeley and his researchers were able to define.

“Not only for the first time did we figure out who the middleman was—in this case, the middleman being jays—but we also found the exact spatial relationship of how this was working,” said Greeley, adding that this was also the first example of this sort of multi-step predator-prey chain involving only birds.

“It's a pretty extraordinary result and very interesting,” says University of British Columbia hummingbird researcher Douglas Altshuler. On the hummingbird side, Altshuler says: “The strategy is that the enemy of my enemy is my friend.”