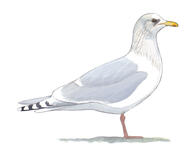 Scientists have been working to figure out the classification of birds for centuries. While there’s no end in sight, every year we get a little closer to understanding which birds should be considered full species, how to divide birds into families, and which are most closely related.

To help us all communicate about different kinds of birds, a committee of the American Ornithological Society (AOS)—formerly the American Ornithologists’ Union (AOU)—keeps a formal checklist of all North American avians, establishing the official name for each species and updating the list regularly. In recent years, updates have appeared every July. Birders watch for these annual supplements, waiting to see how our life lists will be changed by the Checklist Committee’s latest decisions. In 2016, for example, the Western Scrub-Jay was split into two species, and many well-traveled birders gained an “armchair lifer.”

The 2017 update has just been published online. The North American list loses one species and gains one, and several birds get new names or new positions on the list. Here are the changes affecting birds north of the Mexican border.

Thayer’s Gull is lumped with Iceland Gull, and the combined species will go under the name of Iceland Gull (Larus glaucoides).

These have been “problem birds” for many years. Typical Iceland Gulls nest in Greenland and winter mostly in Iceland and Europe; adults usually have white wingtips. Typical Thayer’s Gulls nest in far northern Canada and winter mostly on the Pacific Coast of North America; adults usually have extensive blackish or dark gray marks on the wingtips. In between these two are birds called the Kumlien’s subspecies of Iceland Gull. They nest in northern Canada and winter mostly in eastern Canada and the northeastern United States. Wingtips of adults are variable, ranging from nearly as white as a typical Iceland to as dark as a typical Thayer’s. There are a few other slight differences, but wingtip patterns are the most obvious.

For birders, the challenge has been: How to tell a dark Kumlien’s Iceland Gull from a pale Thayer’s Gull? In areas where both types occur regularly in winter, such as around the Great Lakes, borderline birds have led to endless arguments.

Thayer’s Gull was designated as a full species in 1973, based on a 1966 study that claimed to have found Thayer’s and Kumlien’s nesting side by side in northern Canada without interbreeding. No one has been able to duplicate that observation since, and in fact, other visitors have reported the opposite: apparently random interbreeding between these forms. Nesting sites are remote and difficult to reach, so there still hasn’t been a definitive study. But the Checklist Committee concluded there was no good evidence for considering Thayer’s a species in the first place, so pending new information, they’re all going to be called Iceland Gulls for now. This will make gull identification much simpler in some areas—at least at the species level! Birders who want a challenge can still argue about whether a given individual is closer to Thayer's, Kumlien's, or nominate Iceland, while recognizing that there are no clear boundaries between subspecies. But at least the species ID as Iceland Gull will be more straightforward.

Way back in the 1980s, biologist Jeff Groth discovered that two types of Red Crossbills lived side by side in the southern Appalachians. They had different callnotes, traveled in separate flocks, and behaved as if they were separate species. Further explorations revealed that North America had at least 10 such “types” of crossbills—many overlapping in range but giving different callnotes, tending to feed on the cones of different trees, and operating as if they were distinct species. We’ve assumed that at least some of these would be split eventually, but the situation is very complicated; for the time being, we refer to them with names like “Type 2” and “Type 5.”

Dr. Craig Benkman and his students from University of Wyoming have been working on this complex for years. Recently they focused on “Type 9,” the Cassia Crossbill. While most crossbills wander widely, this type is very sedentary, staying in the South Hills and Albion Mountains of southern Idaho. The cones of lodgepole pines in those ranges offer a steady supply of seeds for the crossbills to eat, apparently because there are no squirrels there to compete for them—and so the new species name sinesciurus means “without squirrels.” The new crossbill’s English name honors Cassia County, Idaho, which includes the complete known range of the species. North America already has birds named for cities (like Philadelphia Vireo), states (Kentucky Warbler), and countries (Canada Goose), but this may be the first one named for a county.

An earlier proposal to split this bird had been rejected by the committee. This time, Benkman and company assembled a large amount of data, including detailed genetic work, to back up their claim. Undoubtedly some of the other Red Crossbill “types” should be considered full species also, but the whole complex is such a mess that it will take a massive effort to figure out species limits and apply names. In the meantime, southern Idaho is now a necessary stop on the birding circuit.

Magnificent Hummingbird becomes Rivoli’s Hummingbird, as it used to be called. This big hummingbird of the southwestern United States, Mexico, and northern Central America had been officially lumped with a similar bird of Costa Rica and Panama in 1983, and the combined species was named Magnificent. Now these two are being split again. The Costa Rica/Panama bird becomes Talamanca Hummingbird, while our southwestern specialty reverts to Rivoli’s. The name honors François Victor Masséna, the 2nd Duke of Rivoli, who was an avid amateur ornithologist.

Le Conte’s Thrasher becomes LeConte’s Thrasher and Le Conte’s Sparrow becomes LeConte’s Sparrow. The palest thrasher of southwestern deserts and the most colorful sparrow of Midwestern marshes really have nothing in common, aside from the fact that both were named for naturalist John Lawrence LeConte (1825-1883). History shows that LeConte spelled his last name as one word, and the extra space was mistakenly added to the birds’ names many years ago, so this is an overdue correction.

Most birders don’t pay much attention to scientific names of species, but those who do will notice many simple changes among the waterfowl this time.

Then there are a couple of names that change because of new classifications.

Northern Harrier: Circus cyaneus becomes Circus hudsonius. This actually reflects a species split, with the North American population being separated from the Hen Harrier of the Old World (which may have strayed to Alaska once in the past).

Northern Shrike: Lanius excubitor becomes Lanius borealis. Another split, with the birds of North America and eastern Asia being considered a different species from the Great Grey Shrike of western Asia and Europe.

In both of these cases, American and British birders had used different English names for the birds, even when they were considered to be of the same species. Now suddenly that’s an advantage, and both sides can keep the names they’ve been using.

All in the Family—or Not: Changes in Sequence

Just in case your head isn’t spinning already, some birds have been moved to different families, and the sequence of some families has changed again. The New World sparrows are now put in their own family, Passerellidae; formerly they were placed in the same family as the Old World buntings, Emberizidae. The Western Spindalis, a rare visitor to Florida and formerly in the tanager family, is now in a new family called Spindalidae. The Yellow-breasted Chat, which always seemed like the weirdest member of the wood-warbler family, is now in a family by itself, Icteriidae—sure to cause confusion with Icteridae, the blackbird family, which differs by only one letter! And several families have been moved around. For example, blackbirds and sparrows now come before the warblers, not after. I think we’ll all be hunting around to find things on our revised checklists for a while.

Some Things Remain the Same

For birders who obsessively follow these debates, some of the committee’s decisions this year were surprising. We had long been expecting that Common Redpoll and Hoary Redpoll would be lumped into one species, but the committee vote on this was split, five to five, with some very detailed comments on why it would be premature to combine these two without more field studies. We were also expecting that Yellow-rumped Warbler would be split into two species—Audubon’s and Myrtle—but the committee wasn’t convinced, and more studies may be necessary. Several other species splits had been discussed for this year, including eastern and western forms of Nashville Warbler, Bell’s Vireo, and Willet, but none of those came to pass. Maybe next year!