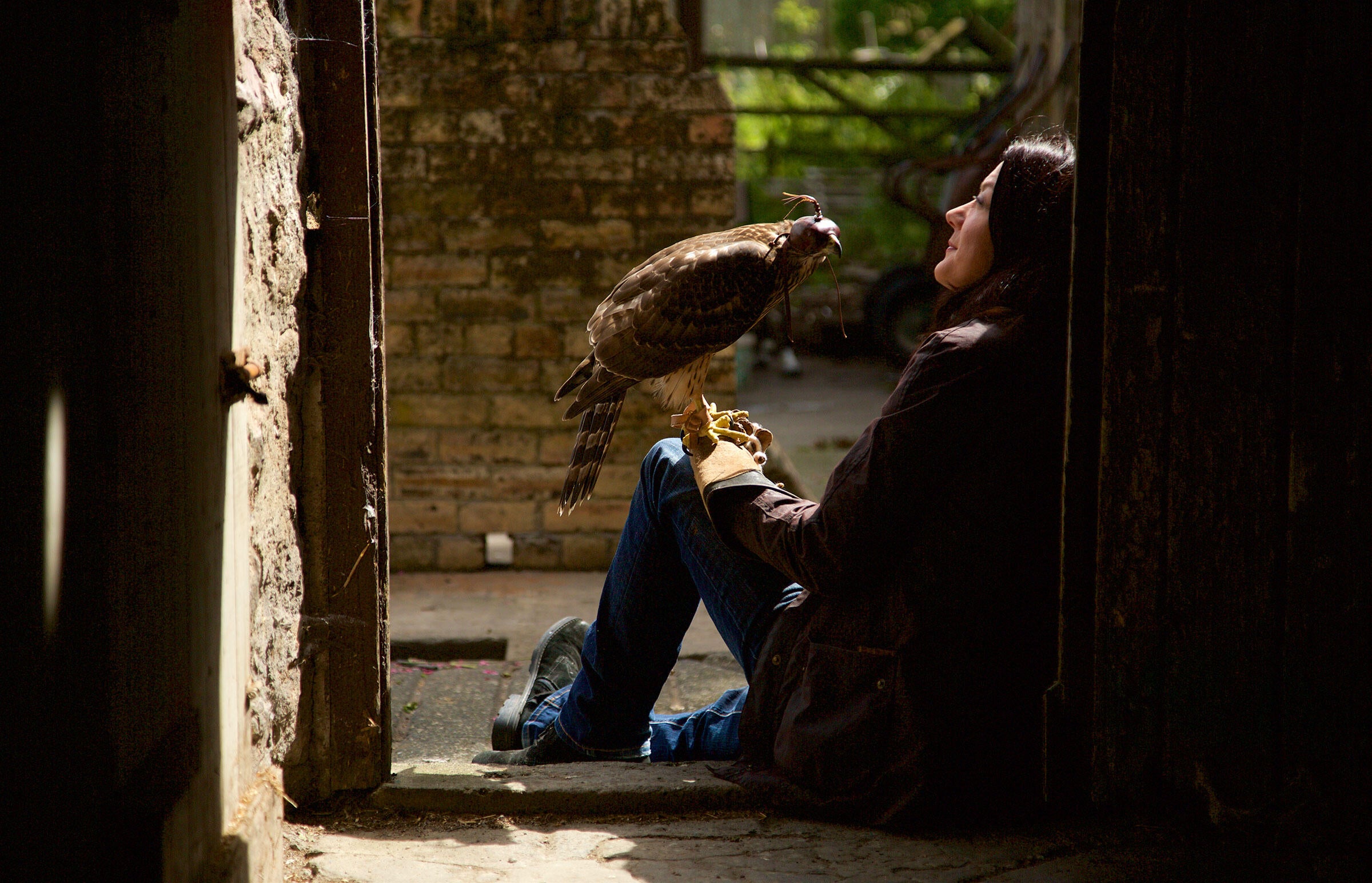 In a new documentary, the author of 'H is for Hawk' befriends a goshawk and explores her lifelong fascination with birds of prey, tame and wild.

When Helen Macdonald published her memoir H is for Hawk in 2015, she thought it was going to be a giant failure. “I thought it was a very peculiar book; I was worried that everyone would hate it,” the English writer and decades-long falconer says, laughing. Instead, it became an international bestseller.

Now, known worldwide for her raptor expertise and storytelling, Macdonald returns with a PBS Nature documentary about her journey to train a Northern Goshawk named Lupin, a bird bred and reared in an aviary specifically for falconry. (Mabel, the beloved goshawk in H is for Hawk, died from an untreatable infection while the book was being finished.) In the 42-minute-long show, which airs tonight, Macdonald scales a swaying pine tree to peer into a nest full of wild chicks, and spends a summer on England’s wind-whipped Pennine Hills to bond with her new bird. Throughout it all, she always comes back to her enduring admiration for hawks. "They’re mesmerizing, self-possessed, astonishing creatures," she says. "They're so well-engineered and evolved . . . seeing one in the wild is always a revelation.”

Audubon spoke to Macdonald about what the ancient art of falconry can teach us about conservation, and why it is that raptors around the world are both loved and reviled.

Audubon: Why are you so drawn to hawks?

Macdonald: Honestly, I was thinking about hawks before I even knew what they were. I used to dream about them. All my friends at school used to have pictures of pop stars on their walls; I had photographs of kestrels. I wanted to be a naturalist and keep hawks. There's something about them which speaks very deeply to me, to many people. They seem to carry more with them than just being birds.

A: Why did you choose falconry as your obsession then? Not birding?

M: I think most people who don't know about falconry have this suspicion that it's about dominating a wild creature and subjecting it to your will. If you spend time with a falconer and their falcon or hawk, you will realize that’s not how it works. I think most falconers simply want to watch these birds do what they do in the wild, but close-up. It's a privilege. [Historically] in Japan, to become a falconer, a novice would have to carry a glass of brimming water around all day with their left hand and not drop a drop before they could hold a hawk. So falconry is about controlling your own needs and your own body in favor of this creature. You disappear, really. The only thing that's important is the bird.

A: You’ve always had a special relationship with Northern Goshawks, but not everyone’s so keen on the birds. In fact, persecution and habitat loss once drove goshawks to extinction in Britain. How did they make a comeback?

M: Goshawks have a really curious history in the United Kingdom. [In the 1960s and ‘70s,] falconers began to watch what was happening in America. They saw the DDT extinction of the eastern Peregrines, and then the extraordinary efforts at Cornell University and the Peregrine Fund to breed these birds and release them back into the wild. They thought, “We used to have goshawks here. Why not anymore? Humans got rid of them, so let's bring them back.”

Back then, falconers traditionally brought goshawks over to train from [other parts of] Europe, often through gamekeepers who would rescue nests of birds that were going to be shot because they threatened game populations in those countries. Falconers discovered it cost about the same to bring two birds over as one, so they'd release one when it was fully feathered. Quietly they restored the birds to these islands. It's a slightly transgressive story, which is very much what falconers are like.

A: In the documentary, you see a nest of wild goshawk chicks for the first time. What was that like in light of this history?

M: Even though they were possibly the wildest things I'd ever seen, I knew their recent ancestors must have been birds handled by people. There's a line in my book that really sums it up: “The wild can be human work.” We can make things better. It's not all disaster; there are small glimmers of hope and light. I think the returning of the goshawk is one [example] of those stories. 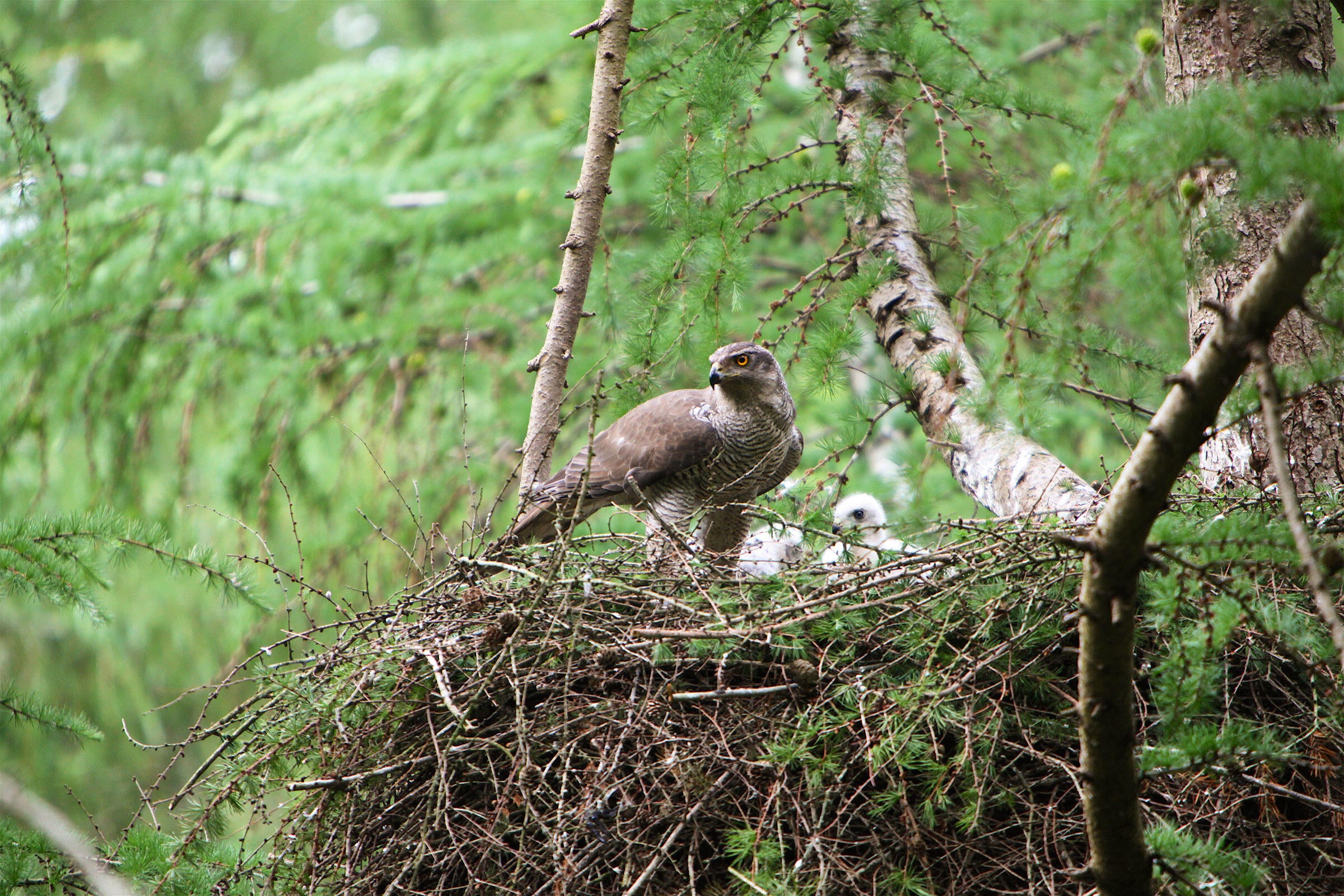 A wild Northern Goshawk with its chicks, found in the forests of England. Photo: James Aldred/Mike Birkhead Associates

A: Why is it that around the world raptors are equally loved and despised?

M: The moralization of birds of prey is very old. It goes back to the dawn of shooting, I guess. It’s something I find really astonishing—the downturn in their reputation. During the great years of falconry, right through to the 17th century, it was sometimes a capital offense to injure a bird of prey because they were resources for the elite. They used to take the raptors from the wild and train them. If you were a falconer, that was your social capital. But when [sport] shooting came in there was a total change. People thought these birds were competing with guns for game, so they all got shot. I think [Lord] Byron even shot an eagle at one point. There's a narrative there of great power meets great power that I think is tied up with all sorts of weird masculine notions. Of course, [the reasons for raptor persecution] are different everywhere, but they really do get hammered.

A: Do you feel it’s your responsibility to share a conservation message through your work?

M: The way I wanted to approach it in H is for Hawk was to show that the way we view the natural world is always through a lens of our own society. Trying to understand why we do or don’t value particular organisms and creatures and landscapes is an urgent question to answer—particularly as we're living through the Sixth Great Extinction. We discard some animals as irrelevant and some as important. But what we see in them is really this accretion of stories that we've told about them and their moral value. It's important to try and understand what those stories are, because sometimes you can look past them and find these real creatures that have different eyes, different minds. And you realize, the world's not all about us.

H is for Hawk: A New Chapter airs today at 8 p.m. EST on PBS Nature. Watch a clip of Macdonald teaching Lupin to fly on command below.