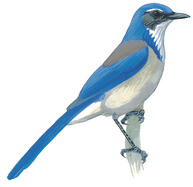 For serious birders in North America, it’s become a July tradition to wait for the annual supplement from the AOU Checklist Committee.

For everyone else, the geeky statement above needs some explanation. The American Ornithologists’ Union (AOU) Checklist of North American Birds was first published in 1886. For the last 130 years and through seven editions, it’s served as the official authority on classification and names of all bird species on this continent. That redbird you’re seeing in the backyard is officially called the Northern Cardinal (scientific name: Cardinalis cardinalis) and it’s classified in the family Cardinalidae. Why? Because the AOU Checklist says so. When it comes to communicating about birds, it’s incredibly helpful to have one standardized list of labels.

Yet names do change sometimes—and so do entire species. Half a century ago, that red bird was just called a “Cardinal”; its scientific name was Richmondena cardinalis, and it was classified in the family Fringillidae. The changes reflect how our understanding of birds and their relationships is always improving. The AOU Checklist Committee (technically the Committee on Classification and Nomenclature—North and Middle America) receives formal proposals based on published research, which they then consider and approve only if the evidence is compelling enough.

The most recent edition of the AOU Checklist was published in 1998. In the time since, the committee has issued numerous updates to keep up with the amount of research that’d been released. Since 2002, these supplements have been published annually in the July issue of The Auk, the journal of the American Ornithologists’ Union.

This year’s supplement included some major changes in the sequence of birds on the list (yes, the order matters, but more on that later). But for most birders, the biggest news involves a couple of species “splits” and some changes in names.

Western Scrub-Jay is now split into two species: the California Scrub-Jay (Aphelocoma californica) and Woodhouse’s Scrub-Jay (Aphelocoma woodhouseii). Birders have long recognized that these widespread western jays come in different flavors: a darker, more rich color in California, Oregon, and southwestern Washington, and a somewhat paler, grayer type in the interior West, from Nevada east to Texas. Many field guides already illustrate them separately as “coastal form” (or “Pacific form”) and “interior form.” They do hybridize where their ranges come together in western Nevada, but studies have shown that such interbreeding is very limited. So now they will be officially recognized as separate species.

Birders who have traveled widely in the West have probably seen both of these already, and will net an automatic “armchair lifer” from the decision. If you’ve already seen them, you can go ahead and count them.

One item that the committee was considering was a formal proposal to combine Common Redpoll and Hoary Redpoll into one species. The writing has been on the wall for some time, and there’s plenty of evidence for lumping them. The committee, however, decided to hold off on this decision and to examine the evidence for another year. So we have at least one more winter of struggling to ID these tricky feeder birds.

Detailed studies sometimes lead to changes in scientific names—new information may show that a bird should be classified in a different genus. Common names are also tweaked at times to better capture the spirit of the species.

Changes in English names include:

Green Violetear (Colibri thalassinus) becomes the Mexican Violetear. This actually reflects a species split as well. The birds found from Costa Rica southward into South America are now split into a new species called the Lesser Violetear (Colibri cyanotus). The Mexican Violetear, common in the mountains of Mexico, Guatemala, and Honduras, often wanders north into the United States and has even reached Canada several times.

Sky Lark (Alauda arvensis) becomes the Eurasian Skylark. (There are established populations around Victoria, British Columbia, and strays often appear in Alaska.) This name is already in use elsewhere in the world, and it helps to reflect this bird’s kinship to another Alauda species, the Oriental Skylark, of southern Asia.

Orange Bishop (Euplectes franciscanus) becomes the Northern Red Bishop, which is what it’s called in its native Africa. Feral populations of this bird are locally common in southern California, and are sometimes seen around Houston and Miami. Most of us don’t count these pockets of bishops on our life lists yet, but if they become firmly established, we’ll know what to call them.

Changes in scientific names include:

Among the biggest changes in the list—and among the hardest for non-scientists to understand—involve changes in the sequence of orders, families, and species.

Typically, the list is arranged with the most ancient forms at the beginning and the most recent ones at the end; but any linear list is going to be unrealistic, because evolution doesn’t proceed in a linear way. Still, the goal is to go from primitive to advanced, with closely related forms nearer to each other on the list.

At one time, the arrangement was based on superficial similarity. More recently, DNA testing has made it possible to measure the relationships among different species, families, and orders, and this has led to major shakeups in the order of the list. Consider the sequence of bird families between the turkeys and the trogons of North America.

Notice some differences? The kicker is that this is just a fraction of the changes on the list. Several songbird families, including wagtails and pipits, true finches, and the House Sparrow and Eurasian Tree Sparrow, were moved to a new position after the Olive Warbler and before the longspurs. Species have also been rearranged within the sandpiper family, and a few were moved around in the vireo family and in the New World quail family.

There are further classification changes south of the border as well (the area covered by the AOU Checklist extends down through Panama and the Caribbean). For example, in Mexico and Central America, the Blue-crowned Motmot, Plain Wren, Three-striped Warbler, and Gray-necked Wood-Rail were all split into multiple species. Birders venturing into the tropics now have even more species to chase!