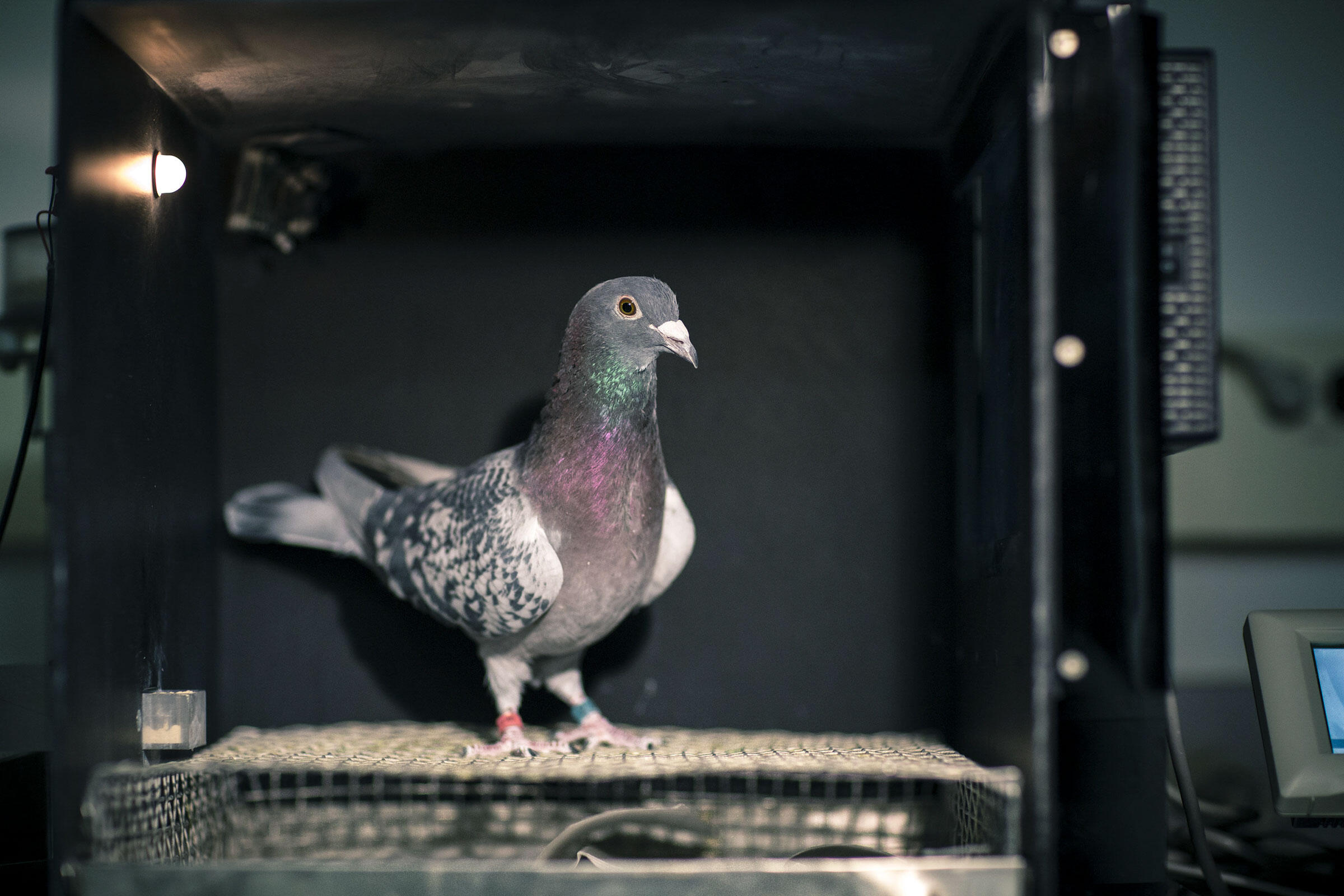 A Rock Pigeon preps for mammogram reading in an operant conditioning chamber. The resulting study, released in 2015, showed that the species is adept at picking out visual clues that pinpoint breast cancer masses. Photo: Kathryn Gamble

Editor’s Note: In “Medical Mysteries,” Audubon is featuring scientists who’ve turned to birds to solve age-old health dilemmas and answer questions about our own biology. Read about Ostriches that lay detoxing antibodies, Barn Owls that cut through the sensory fray, and below, Rock Pigeons that inspect mammograms and heart scans.

Training a pigeon to spot signs of cancer would sound like an absurd idea to most people. But to Edward Wasserman, it sounded like another day at the office.

For 50 years, he’s watched these birds excel at challenging perceptual tasks. For example, he can put a pigeon in a box, show it pictures of human facial expressions, and train it to recognize our emotions.

Six years ago, Wasserman, an experimental psychology professor at the University of Iowa, teamed up with two other experts to see if they could also train Rock Pigeons to spot signs of breast cancer in medical scans.

The project started when pathologist Richard Levenson approached Wasserman and radiologist Elizabeth Krupinski with an idea: What if the birds had a better way of spotting subtle signs of disease than doctors? The misdiagnosis rate is high using mammograms—about one-fifth are either deemed false positives or have trouble spots that are not flagged at all. Pigeons, on the other hand, might improve those odds without having to pass (and pay for) four years of med school.

The resulting study, published in 2015, produced an eye-popping find: In general, the birds read the X-rays correctly 85 percent of the time. Now Wasserman is on the verge of releasing a new paper that shows pigeons can have similar success spotting damaged human heart tissue.

The setup for both experiments was simple. A hand-raised pigeon sat inside a metal cube no bigger than a microwave oven. One wall was removed to let the researchers to peek in, while another held a screen that rolled through medical images. A “yes” or “no” field flanked either side of the screen to allow the bird to peck out its answer: diseased or not diseased. For every correct submission, the setup would dispense a protein-packed treat.

The flock even spot-checked each other on the same scans. Their combined scores, Wasserman says, shows that they learned quickly (bootcamp lasted just a few weeks) to deliver technically-accurate results.

Of course, no one’s suggesting that hospitals rush to build coops in exam rooms. Instead, Wasserman wants to use pigeons to pre-screen X-rays—or teach radiologists and pathologists, who rely heavily on medical imaging to assess patients, to home in on the bird-approved clues.

Wasserman’s interest in Rock Pigeons goes back to his days studying psychology in the 1970s. He first started doing research on birds at Indiana University, where pigeons had become a popular test subject after famed psychologist B.F. Skinner used them in a number of studies. Skinner vaunted the pigeon’s learning and visual abilities after he taught them to do various tasks like go bowling or guide American bombs towards enemy ships during World War II (a project that was eventually abandoned).

Skinner’s work inspired Wasserman to wonder whether pigeons’ mental faculties could be tapped to detect diseased masses. “They are exquisitely sensitive to information found in the image alone,” he says, and don’t have to rely on further context like smells or sounds. That’s partly a function of evolution, since the species’ survival relies on parsing predators and picking up bits of food scattered on the ground. But picking out medical images of breast tissue with cancerous features? That’s definitely not something pigeons have evolved to do.

Of course, humans haven’t evolved to do this either. Doctors learn to distinguish bad masses from healthy tissue in medical school, where they get reinforced with grades; pigeons get schooled in Wasserman’s lab, where they get a pellet of food if they make the right choice.

How the pigeons read the X-rays, though, is still unclear. One potential explanation is that their brains draw more types of information from the image than a human’s would. Pigeons, like people, have at least two visual systems that work in concert, Wasserman explains, including one for color and one for shape. To simplify tasks, we may pick just one stimulus to analyze, even if it means having less information to shape our response. For analyzing mammograms and other scans, “the rule may be that you need to use both color and shape,” Wasserman says—and through training, a pigeon can quickly learn to use both.

What that means is that pigeons have capacities beyond our own. Young doctors, especially, can learn from how birds determine what’s normal and what’s not on a scan, says radiology researcher Claudia Mello-Thoms: They often focus on the wrong places when searching for anomalies. Experience and training can correct that; but the errors don’t necessarily go away, they just change. “[Older doctors] look in the location of the abnormality, and ultimately decide it’s benign or something they shouldn’t worry about,” she says. She joined the University of Iowa faculty this year and hopes to collaborate with Wasserman on more pigeon tests.

Outside of the classroom, pigeons can serve as quality control for hospitals that are digitizing medical images. Staff will often use computer algorithms to shrink large files, which reduces the visual quality of the scans. “A trained radiologist doesn’t have the time or inclination to sit in front of a computer screen to assess whether an algorithm is effective,” Wasserman says. Pigeons, he notes, could do the drudge work of making sure disease-relevant details aren’t lost.

Just as with people, some pigeons are more adept at reading X-rays than others. But whether bird, human, or computer, we’re all equally naive when it comes to recognizing the inside of a body, Wasserman says. The difference is, one student will “show up on time for all the experiments, work its butt off, and do so for peanuts.”