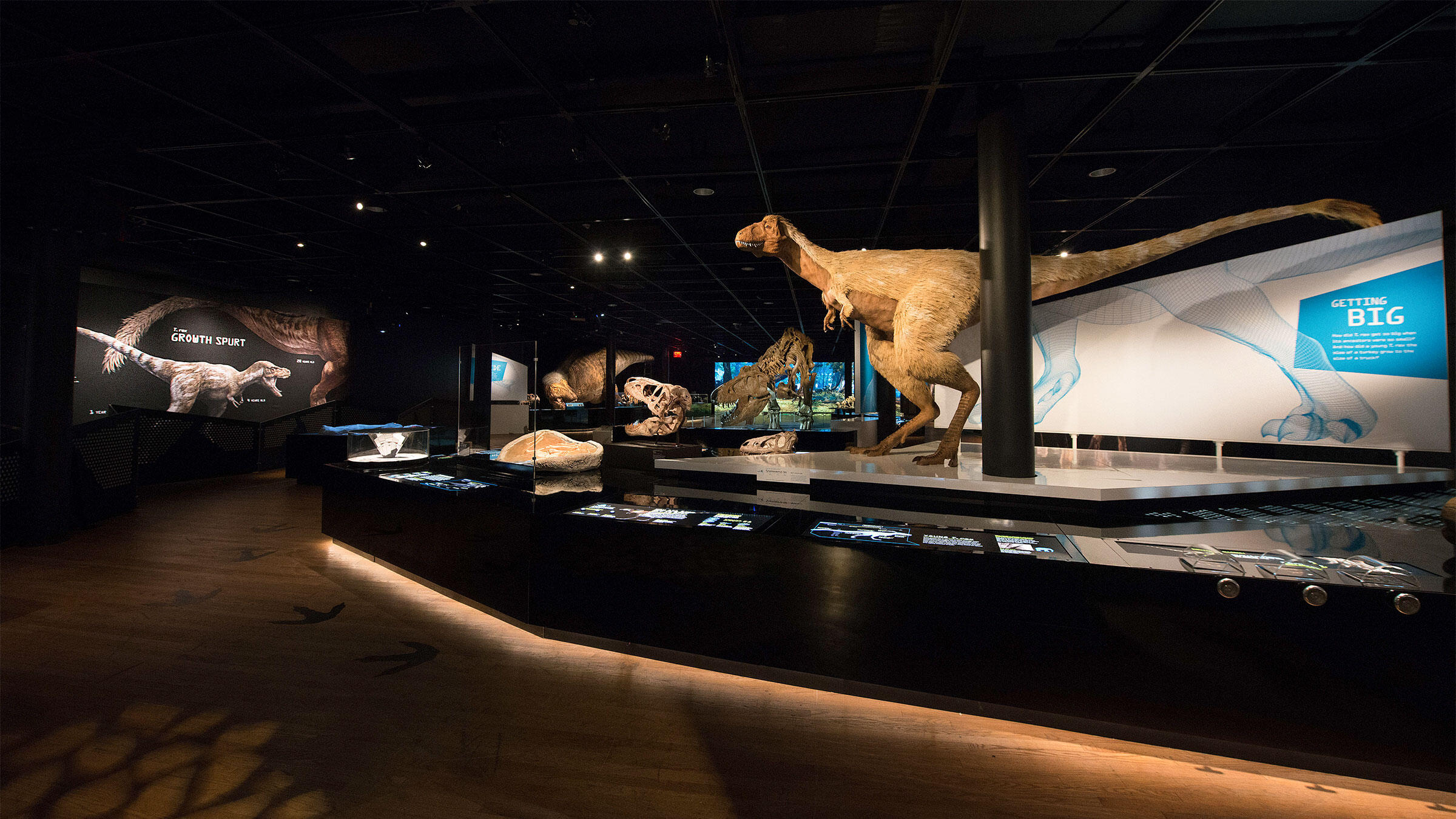 T. rex: The Ultimate Predator, on view at the American Museum of Natural History, explores the entire tyrannosaur superfamily and reveals the most scientifically accurate representation of T. rex to date—feathers and all. Photo: AMNH/D. Finnin

How Birds Are Helping Scientists Reimagine a Feathered T. Rex

New insights about the predator's brains, speed, and appearance are being discovered by comparing fossilized dinosaurs to their living relatives.

Thunder and lightning boom and crackle overhead. Snapped cables dangle from what was a 10,000-volt electric fence. A massive dinosaur stalks out of the jungle, stomping through the now-useless barrier and revealing a mouthful of knife-sharp, banana-size teeth. It lets out a blood-curdling roar. Soon after, a man gets eaten off a toilet.

This is how we meet Tyrannosaurus rex in the classic 1993 film Jurassic Park, based on Michael Crichton’s 1990 novel of the same name. With its highly realistic animatronics, the movie—and its four sequels—helped influence how generations of movie-goers thought T. rex really looked and behaved. But more than two decades later, it turns out we don't know this ancient predator as well as we thought.

In the early 1990s, all paleontologists really understood about T. rex was “that it was big, it was carnivorous, and it had a small brain,” said Gregory Erickson, a paleobiologist at Florida State University, at a March 5 event to celebrate the opening of a new exhibit, T. rex: The Ultimate Predator, at the American Natural History Museum (AMNH) in New York City. Over the last 30 years, though, new fossils and techniques have allowed scientists to compare T. rex to their living relatives—modern birds in particular—to reimagine what this apex predator looked like, how its brain functioned, and even how it moved. The exhibit, which follows the evolution of the tyrannosaur family, reveals many of these new discoveries.

Now we know that Crichton’s T. rex was missing its feathers—and so much more.

The most noticeable update to the T. rex we all know and fear is its feathers, which scientists now believe stretched from the crown of its head down along its neck and back like a horse’s mane. Feathers also covered the tail, ending in a fluffy poof.

Feathers are rare in the fossil record—the conditions have to be just right for softer parts like feathers or hair to survive normal decay—and scientists have never unearthed evidence of an actual T. rex feather. However, in 2004 Mark Norell, curator of paleontology and the new T. Rex exhibit at AMNH, and his colleagues in China discovered the imprint of ancient, hair-like feathers pressed into the rock alongside the bones of an early tyrannosaur species, Dilong paradoxus. All tyrannosaurs are theropods, a group of bipedal dinosaurs with hollow bones; modern birds evolved from small, flightless theropod dinosaurs. So, Norell’s logic goes, if tyrannosaur ancestors and modern theropod descendants both sported (and still do) feathers, it’s safe to assume that the species in between, including T. rex, had feathers as well.

Norell draws a parallel to humans. Paleontologists have never discovered evidence of hair on early hominids like Australopithecus or Neanderthal. But because chimpanzees and modern Home sapiens (us) have hair, scientists are comfortable assuming that other species in that evolutionary lineage also had it.

There's no way to know exactly what a T. Rex really looked like in feathers, but AMNH scientists extrapolated what we know about feather function in modern birds to make an educated guess. T. Rex hatchlings, for example, likely were the size of skinny turkeys and covered in fluffy, down-like feathers that kept the babies warm and camouflaged. A young T. rex would keep these feathers as it continued to grow, but by the time it reached full maturity, around 20 years old, the predator likely maintained display plumage only on its head and tail.

“Keep absolutely still,” Jurassic Park’s Alan Grant warns when T. rex emerges from the woods looking for a meal. “Its vision is based on movement.”

Not so, Dr. Grant. As it turns out, a closer look at T. rex brains shows these creatures actually had excellent senses, including eyesight, and would have been extremely difficult to elude.

Soft tissues, like brain, decay quickly and are very rarely preserved in the fossil record. However, these organs do leave an imprint on the bone that once encased them. Norell and his team made a cast of the inside of a T. rex skull and compared it to brain casts of the animal’s closest living relatives, birds and crocodiles.

The shape of a T. rex brain fell somewhere between a crocodile and bird brain. Crocodile brains are linear in shape, with hindbrain, midbrain, and forebrain lined up in a row, front to back. Bird brains have more of an S-shape, with an elongated forebrain leading down into the mid- and hindbrain. Much like birds, T. rex had a partially elongated forebrain with room for a large optic lobe. “We believe they had very, very large visual processing centers,” Norell says.

T. rex also had large eyes—about the size of oranges—positioned in the front of its face, which provided good depth perception for hunting, much like an avian raptor. The dinosaurs also probably had tetrachromatic vision (with four color receptors in their eyes instead of the three standard in humans) and could see into the ultraviolet spectrum, just like modern birds and reptiles, Norell says.

What really surprised Norell and his colleagues was the size of the olfactory bulbs, responsible for the sense of smell. There's a debate in the scientific community about how well birds can smell. While some scientists are now saying birds do have a developed sense of smell, Norell and his colleagues weren't expecting to find evidence of that in the dinosaur brain. But the olfactory area of the T. rex brain was so large “that they may have been one of the few dinosaurs that had good senses of smell,” Norell says.

"Must go faster," urges mathematician Ian Malcolm as the T. rex reemerges from the woods and chases down the speeding Jurrasic Park Jeep, nearly snatching Malcolm from the back.

While a T. rex might have been able to keep up with a vehicle at low speeds, an adult T. rex couldn’t run, says Norell. That's because these hefty beasts needed to keep one foot on the ground at all times. (Juvenile T. rex weighed less and could likely run considerably faster than the adults.) Compared to humans, though, these giants could still get around pretty quickly with their long strides.

To figure out how fast an adult T. rex could move, scientists started with chickens. It turns out, chickens and T. rex have similar musculature, says Norell. (The main difference is that T. rex had a large, heavy tail, shifting its center of gravity backward.)

Scientists projected chicken muscles onto a T. rex skeleton, using visible notches in the bones as a guide to where the muscle would have attached. From there, Norell and his team calculated the proportional size of each muscle on a T. rex body. Then, they developed a computer model and ran it over and over again to figure out how much force each muscle could exert.

Norell and his team found that these dinosaurs could move between 10 and 25 miles per hour—similar to the upper reaches human abilities. Usain Bolt, regarded as the fastest man on earth, can sprint up to 23 mph in the 100-meter dash, while record-setting marathoner Dennis Kipruto Kimetto averaged over 12 mph in the 2014 Berlin Marathon. Whether a T. rex could keep up those speeds for 26 miles, however, is another story.

Still, considering what we know now about the T rex., it's clear that this feathered beast was even smarter and more deadly than we thought—and, like many of the dinosaurs in the Jurassic Park movie series, very much in need of a makeover for the next, inevitable sequel.

Reimagining the T. rex—with feathers, brains, and more—is the focus of the American Natural History Museum’s new “T. Rex: The Ultimate Predator” exhibit, which opened to the public on March 11 in New York City.