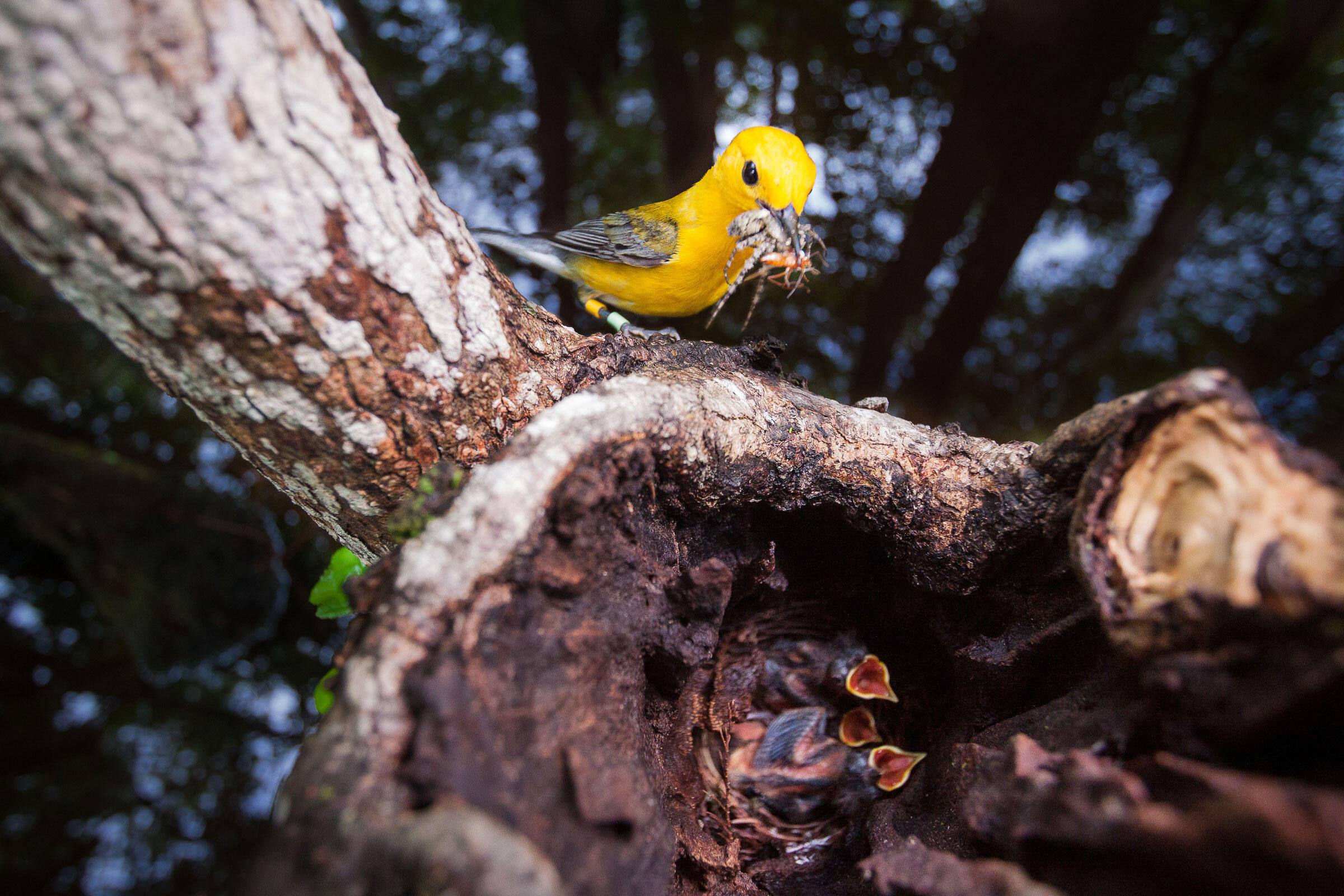 Whether it be the dazzling yellow plumage of a Prothonotary Warbler or the soft, tawny belly of a female Northern Cardinal at your feeder, birds stir something within people that can make us look past our differences. Photo: Mac Stone

How Birds Bind Us

In such a divisive age, those things with feathers bring people together in so many inspiring—and creative—ways.

Just a few years ago, in the fall of 2014, Audubon released our Birds and Climate Report, which used data from the Christmas Bird Count and breeding bird surveys to project that more than half the bird species in North America would face serious peril from the effects of global warming in the coming decades. The news hit hard, and not just among the cadre of dedicated bird lovers you’d expect to recoil at such an announcement, but among a far vaster population: the bird likers, the bird curious, even the Birds? I barely notice them except in the spring when they start singing again in the tree outside my bedroom window people.

It seems that even when self-interest isn’t enough to roust ourselves to action against an amorphously intractable foe like climate change, there’s something about imagining its impact on birds—about conjuring a future in which that birdsong outside the window fails to return one spring—that breaks through. And it breaks through in a way that can bust up the carved-in-granite tribal political loyalties that seem to characterize our current age. In our research after the study came out, we discovered that a great many people who reject the proposition that humans are the primary drivers of climate change are actually willing to support actions to mitigate its effects when they learn that doing so might help protect birds.

Around the same time the Audubon Report was released, I made the acquaintance of a young art dealer who had opened a small storefront gallery in the northern reaches of west Harlem. Avi Gitler, I learned, had also just begun commissioning artists to paint birds on the roll-down security gates that guard businesses during off hours in the neighborhood around his gallery. Why birds? Because the gallery happened to be located in the same general patch of northern Manhattan where John James Audubon himself had spent the last 10 years of his life (along with the entirety of his afterlife, buried in Trinity Church Cemetery just a few blocks north of Avi’s place).

Inspired by Gitler’s vision, and still imbued with the passion for action that reading the Audubon Report (half of all North American birds!) tends to spark, I heedlessly proposed that we partner up and get artists to paint murals not just of birds but of climate-threatened birds—and not just the dozen or so that Gitler had envisioned, but all 314 species that Audubon’s science had shown to be at risk. And so the Audubon Mural Project was born. The first artist Gitler had commissioned had already finished his mural—of an American Flamingo: not a climate-threatened species. So the artist came back and painted it over with a don’t-mess-with-me rendering of a Tundra Swan. In the three years since, we’ve painted birds—82 so far, and the pace is accelerating—all over John James’s old stomping grounds. And not just on security gates, but on doors, walls, and the sides or even façades of six-story buildings.

Of the 61 artists who have participated, I’d say most would not have called themselves ardent bird lovers, but the plight of the birds is certainly what inspired them. There’s something about birds—their beauty? Their grace? Their tenacity?—that pierces the heart and spurs the imagination. (On one of the many mural tours I’ve led for classes of early-elementary-school students, I gestured toward the top of a six-story mural and asked if the first-graders had any idea how the artist might have managed to get all the way up there. Immediately, and with utter certainty, one young boy shouted, “Flew on the back of a really big eagle!”)

In the nearly five years I’ve served as the editor-in-chief of Audubon, I’ve seen a zillion amazing and wide-ranging examples of people coming together and rallying around birds.

The way the artists and the entire community in upper Harlem have come together around the murals (and have spread the word about the threats to birds) has been inspiring, but it really shouldn’t be seen as surprising. Not, at this point, to me anyway. In the nearly five years I’ve served as the editor-in-chief of Audubon, I’ve seen a zillion amazing and wide-ranging examples of people coming together and rallying around birds, from volunteers with New York City Audubon monitoring (and, when necessary, shutting down) the memorial 9/11 spotlights to save migrating birds, to people recreating habitats and even entire islands for their benefit, to using them as aids for bringing struggling veterans back from the brink.

Even the Christmas Bird Count whose data made the climate report possible is a tremendous example. There’s something extraordinary about the eager willingness, for 118 years now, of tens of thousands of Americans to give of themselves—their time, their attention—to benefit science, our understanding of the world, birds. But then again, are they sacrificing? Of course not. I suspect that the number of humans who have participated in a Christmas Bird Count and have felt diminished by the experience can be expressed in a single digit, and I further suspect that said digit is a zero.

That’s why I’m excited about Year of the Bird—excited for everyone who signs the pledge to take action this year on birds’ behalf. We and our partners at National Geographic, Cornell Lab of Ornithology, and BirdLife International have assembled a full slate of monthly calls to action—opportunities to participate in community science projects, information on easy steps to a bird-friendlier home, even simple suggestions for how to turn a child into a lover of nature. None of them are arduous in any way, but neither are any of them small. Birds inspire us and have an almost magical way of bringing us together—and when we act together on behalf of birds, we can accomplish truly meaningful things.

Mark Jannot is the vice president of content for Audubon, and the Editor-in-Chief of Audubon magazine.