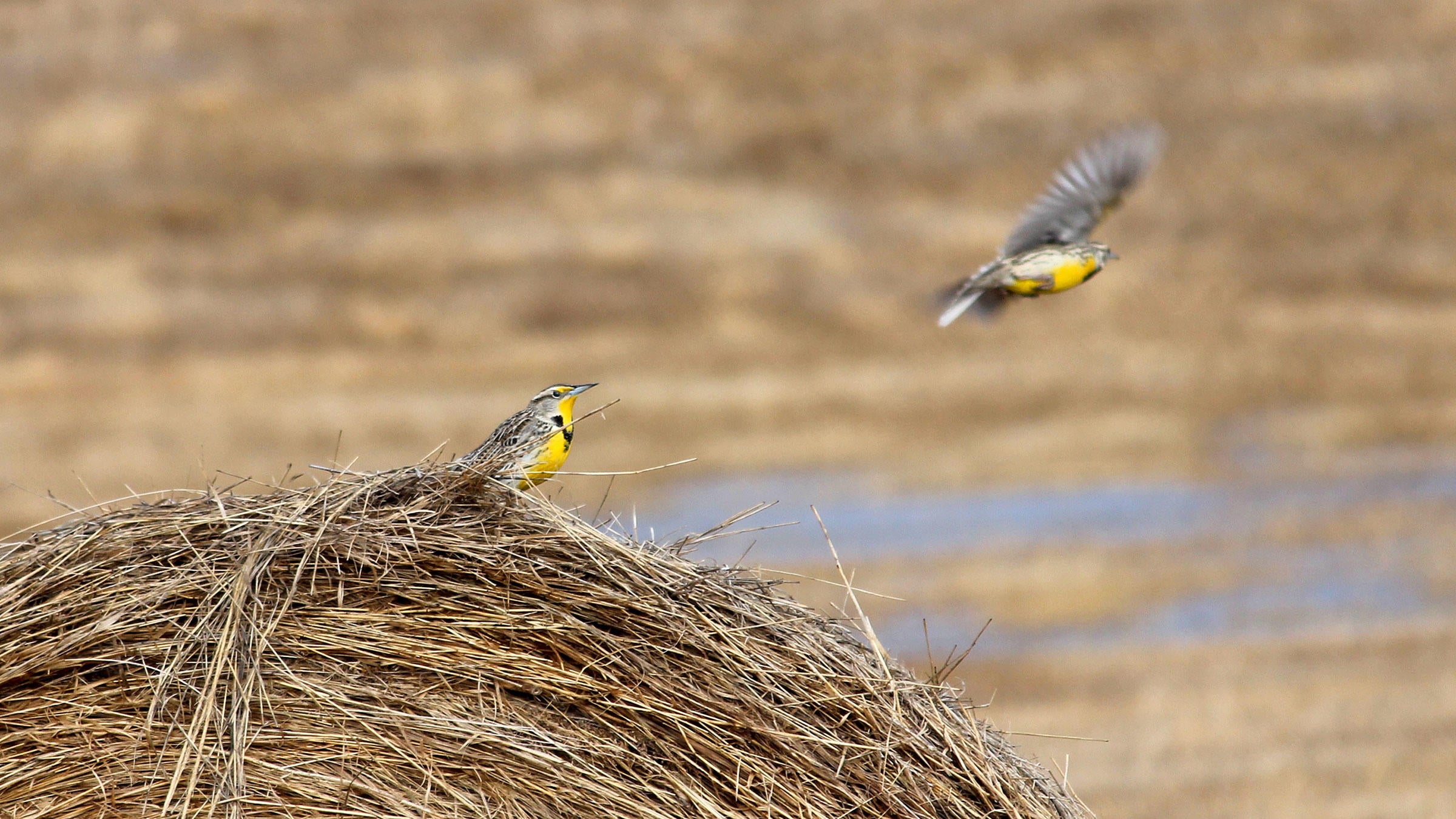 A pair of Western Meadowlarks in the Kulm Wetland Management District of North Dakota. Photo: USFWS

How Birds Brave the Extremes, All Day, Every Day

A new book reveals the strange and wondrous adaptations birds rely on to get by.

For humans, a life on wings symbolizes a life free of struggle—but birds don’t have it so easy. They have to find mates, forage for food, and use those wings to migrate thousands of miles—all while avoiding countless threats from nature and humans.

Through it all, they’ve adapted. From the ballooning air sacs of the male Magnificent Frigatebird to the precise, celestial migration of the European Starling, birds have learned to survive in a wide spectrum of ways. Ornithologist and life-long birder Roger Lederer dives deep into these evolutionary miracles in his new book, Beaks, Bones & Bird Songs. Audubon connected with Lederer to discuss the hardships and remarkable success of birds.

Audubon: What made you realize all these different features of birds were enough to fill a book?

Roger Lederer: It seems to be that a lot of books focus on birds breeding. During that time birds are singing, they’re in their best plumage, they’re courting, they’re making nests and raising young, and that’s all really interesting. But the rest of the year, what are they doing? They’re going away, and they gotta be surviving somehow. Whether it’s fly-catching or migrating, they all have their own style. The more I looked into it the more diverse these styles were. It’s one thing to attract the best mate and have kids, but you have to live successfully and be healthy and strong; you have to migrate and catch food and avoid predators, and you have to do it in a different way.

A: What struck you as the most memorable adaptations?

RL: Birds can see ultraviolet—we’ve known that for 20 years now—but now it seems to be that they’re looking at each other in different ways. For example, male and female Western Meadowlarks look a lot alike. But if you shine a light on them that reflects ultraviolet light, the female reflects that differently than the males do. So the males can differentiate the females, even though we can’t. Ninety-five percent of birds are that way. They can see better; they can see farther; and they can see at a faster rate.

Take flicker frequency. We used to watch Charlie Chaplin movies and we would see people walking around very choppily because they shot the films in 16 frames per second. So in those movies we could see each individual frame. Now that everything is shot at 24 or higher frames per second, we can’t tell one segment from another. We see fluorescent lights, which have a flicker frequency of around 50 as very even, very smooth. But to birds, which have a flicker frequency of 100, fluorescent lights look really choppy. They can see other birds fly; they can see insects much more clearly. Everything is much more acute to them. Even with songbirds—their ears are much more acute. They can pick up little frequencies that we can’t.

A: How do birds react and adapt differently to an environment that is designed by and meant for humans?

RL: We can’t blame climate change specifically for the disappearance of birds, but we know that over the past 40 years there has been a 40 percent decline in grasslands birds in North America thanks to climate change and [loss of] habitat. Some [birds] are adapting by altering their songs; some are adapting by breeding more often. Other birds are much more cosmopolitan. They can eat anything and nest just about everywhere. But some birds can’t cope with the city, like flycatchers or warblers that are dependent upon insects or dense brush. In the past, birds with restricted habitats would do well because no one would bother them and they could do their own thing. But now as urbanization comes closer and closer, their particular habitat is disappearing. And unless they evolve quickly—which is not likely—they’re going to disappear.

A: Is there any bird you’ve encountered in your studies that makes you think, “Wow, how on earth does this bird survive?”

RL: You know, I think that all the time. How do these Bar-Headed Geese fly over the Himalayas? How do Arctic Terns fly all that way, spending eight months of the year migrating back and forth? You see those pictures of [Antarctic] penguins standing out there in below-60-degree weather with the wind blowing 50 miles an hour and you think, how do they make it? Well, they do. I think if you look at any bird close up you’ll find that they’re all amazing.

Beaks, Bones & Bird Songs: How the struggle for survival has shaped birds and their behavior, by Roger Lederer, Timber Press, 288 pages, $24.95. Buy it at Powell’s Books.