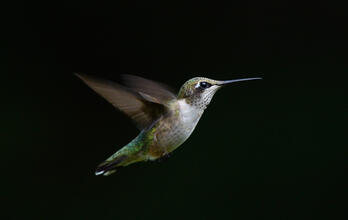 Light pollution has an outsized impact on migrating birds. When buildings use a lot of exterior lighting, it disorients the birds and causes them to crash. In recent years, a couple of mass-casualty events of night-migrating birds in Galveston, Texas, and Philadelphia, Pennsylvania, has raised awareness of this danger, and people across the country are taking action.

There is an easy solution to stopping these bird mortalities: Turn off non-essential lighting. Around the United States, cities and communities have decided to implement Lights Out programs. According to Audubon’s Lights Out program, when you convince building owners, managers, and homeowners to turn off excess lighting during the months of bird migration, you are helping birds have a safe passage between their nesting and wintering ground.

Lights Out programs started to become popular in the United States around 20 years ago, and what started as a grassroots effort now has country-wide reach through Audubon's national Lights Out program. There are currently 47 cities in the United States that take part. Recently, the three largest cities in North Carolina—Charlotte, Raleigh, and Winston-Salem—joined suit. And Georgia has Lights Out efforts throughout the state. You can keep reading to find out how Audubon and Audubon chapters convinced people in four cities to adopt Lights Out protocols during spring and fall migration.

Galveston, Texas sits on a barrier island along the Gulf Coast about 50 miles from Houston. It is frequently the first thing birds see after flying across the Gulf during migration. It was also the site of a mass mortality event in 2017. Anna Vallery, conservation specialist at Houston Audubon, says the managers of the building in Galveston were horrified and reached out to Houston Audubon asking, ‘how do we prevent this from happening again?’ This is how Houston Audubon’s Lights Out for Birds program started.

“Nobody wants to see all these beautiful colorful songbirds on the side of their building,” says Vallery. “Houston Audubon reached out to various experts, looked at the impact of lights on birds, and ended up starting this really grassroots lights out for birds' efforts.”

To increase the awareness around Lights Out, Houston Audubon started sending out action alerts, especially during times when large numbers of birds were expected to be migrating through an area. For example, after monitoring upcoming weather and migration forecasts, staff at Houston Audubon tagged the city of Dallas on social media about the impending surge and the dangers that outside lights posed to birds. People responded, asking how they could take action to make Dallas safer for birds. In 2019, the Cornell Lab of Ornithology reached out to Houston Audubon to partner on a larger-scale Lights Out effort for birds in places like Dallas.

“It was a very grassroots effort in Houston and Galveston," says Vallery. "We wanted to expand it into Lights Out Texas, and so we brought on a bunch of different partners.”

Since then, stakeholders in Galveston and in cities across the state of Texas started coming together to coordinate Lights Out action alerts and a statewide collision monitoring effort. Vallery says they originally found 10 partners who could really establish protocols for serving collision monitoring and were able to push cities and buildings to start them. Now they have around 40 partners across the state who have joined in to promote it.

All of that effort has tangible results. Last spring, Houston Mayor Sylvester Turner issued a Lights Out proclamation that encouraged building managers, residents, and businesses to turn off non-essential outdoor lighting during migration periods. It was just one of many new Lights Out efforts happening across the state. While Houston was setting up their Lights Out for Birds program another city, 190 miles to the northwest, was setting up its own Lights Out program.

The Lights Out program in San Antonio started after Patsy Inglet, president of Bexar Audubon Society, learned about a similar program, not in Houston, but in Baltimore, Maryland.

“When the opportunity came to get involved in Lights Out locally in Texas with Texan by Nature, I stepped up to help coordinate it. Little did I know how much work that was,” says Inglet.

Like many other places, one of the biggest challenges facing Bexar Audubon and Texan by Nature was a lack of data on bird collisions in San Antonio. To address that problem, Inglet and her husband created survey protocols to track bird collisions, the routes and coordination for the volunteers, and tried to form teams to do collision surveys during spring and fall migration in 2021.

During the surveys, volunteers found and documented all of the bird strikes in the downtown area of San Antonio. But once they'd collected a fair bit of data in those surveys, Inglet says, they realized that they needed more data, specifically in outlying parts of the city where buildings don't have stringent construction restrictions.

Inglet says that they decided to begin gathering the data partly as a way to join the Bird City Texas program in Texas. Bird City Texas is a cooperation between Audubon Texas and Texas Parks and Wildlife.

All communities can apply to become a ‘bird city,’ says Inglet, but the process is very intense because applicants must show progress over a number of years. The Lights Out San Antonio effort was one of multiple facets that Inglet and her colleagues developed as they put together their Bird City Texas application.

“We're using a combination of just education and awareness to encourage them to do things," says Inglet. "The next step would be to work with city government on a resolution that would make a formal request for building owners and managers to follow Lights Out during migration.”

Bird Safe Philly officially began in April 2021 when partners from across the Philadelphia region came together after a mass collision event the year prior. While Audubon Mid-Atlantic developed the science and monitoring protocols for the prograrm, the Academy of Natural Sciences at Drexel University, local bird clubs like Delaware Valley Ornithological Club, and local Audubon chapters Wyncote Audubon and Valley Forge Audubon, brought in volunteers, advocacy and marketing experience, and other areas of expertise.

“We're basically a bunch of people from a bunch of different organizations that are donating our time to make this happen,” says Keith Russell, the program manager for urban conservation at Audubon Mid-Atlantic. “In order for it to continue and to grow, I think we need to have a more sustainable formula for how the whole program is run.”

This means more financial support, from foundation support to individual support like hiring some staff that can anchor the work that needs to be done.

One challenge Bird Safe Philly has not faced is lack of participation. In addition to the Builing Owners and Managers Association, the Building Industry Association, and major real estate companies, other major business like Comcast and PECO are also participating in Lights Out Philly. At press time, more than 60 people and businessess have registered in the program.

“Our best strategy now is to simply provide the information so that people are at least aware of it, so that every person who constructs a new building in Philadelphia for example, could be given information that alerts them that this is a real problem here and that there's ways to prevent it,” remarked Russell.

Late last year, Miami became the 40th city in the United States to set up a Lights Out program. The Lights Out Miami initiative aims to learn how many birds are killed by collisions with buildings each year in Miami, and organize and implement a bird collision monitoring campaign with Miami-Dade County.

The idea came to Brian Rapoza, field trip coordinator at Tropical Audubon Society, one day as he thought about how Miami sits right along a major migratory route in the Atlantic flyaway. Because Miami has a lot of tall buildings lit up with lights at night, Rapoza concluded, these buidlings likely present a problem for the millions of birds that migrate through the city each spring. But before he could get the city of Miami to act, he needed to get the evidence to prove it.

Rapoza brought the idea to Tropical Audubon’s executive director, Paola Ferreira, who thought it was a great idea. While they were developing the collision monitoring program, they also created pledges for building managers and property owners to sign. Rapoza says that it was a hard sell in the beginning because people need to be convinced that there is a problem.

While bird collision data collection started in fall 2021, Tropical Audubon is still looking for more volunteers to help gather enough information to make a convincing case for more building managers. While they continue to grow the program, they're also making sure that their survey protocol is solid and that volunteers feel supported, says Rapoza.

“We're going to try to make it a little more structured in the spring,” says Rapoza. “People collecting the data [will be able to] provide more information, like how long they looked for [bird] carcass, what was in the area [they were surveying], how far did they walk, and so forth. And by collecting a little more data, we can create this bird network so that we can get the word out to more and more people about what we're trying to do.”