(From left to right) Blackburnian Warblers, Ovenbirds, and Magnolia Warblers were among the top casualties in this week's glass-induced tragedy in Galveston, Texas. Some of the counts shown here are incomplete. Photo: Josh Henderson

Animal Services was able to rescue just three birds after a massive number of spring migrants hit a glass-sided tower in Galveston.

The numbers are horrifying: 90 Nashville Warblers, 60 Blackburnian Warblers, 42 Chestnut-sided Warblers, 41 Ovenbirds—and that’s just four of the 25 dead species collected from the 23-story American National Insurance building in Galveston, Texas, on Thursday morning. In total, 395 small feathered bodies were found, and they were all victims of building collisions.

Josh Henderson, the head of Animal Services for the Galveston Police Department, was called to the scene at 7:20 a.m. He was able to rescue three of the stunned birds, which were then taken to a wildlife triage center. But the sheer number of casualties shocked him. “This is the largest event like this I have ever been a part of in over 10 years,” Henderson said in a press release.

Window and building strikes are a common problem for songbirds, particularly in cities located in popular migration flyways. The island of Galveston lies in the Gulf of Mexico, which is a common crossover point for flocks coming up from the Yucatan and Latin America. With spring migration in full swing, hundreds of thousands of birds are currently racing through the region to reach their northern breeding grounds. To make matters worse, Galveston got almost a quarter inch of rain on Wednesday, which might have encouraged the long-distance travelers to look for shelter.

When birds encounter glass, they see the image it reflects rather than a hard surface; so when a building’s internal or external lights are left on over night—the latter being the case for the American National Insurance building—birds can easily get disoriented. Some might think it's a place to rest, especially if they spy office plants inside, while others might just see a clear passage. Both can cause them to crash into windows or even the side of the building—often to a fatal end. After surviving a trek that takes them over hundreds of miles of land and open water, it’s an unjust end for the intrepid migrants.

The good news is that there are some ways people can help prevent these collisions. Cities can encourage building managers to turn off overnight fixtures during spring and fall migration. Several Audubon groups have convinced their local governments to do just that through the Lights Out initiative (see here for a full list of places). Owners of skyscrapers and other large structures can also invest in industry-tested, “bird-friendly” products, including glass that’s patterned so avian eyes can see it. Other urban centers have citizen science networks that collect data on collisions. In New York City and Dallas, for instance, pedestrians can report dead or injured avians to D-Bird, a project founded by New York City Audubon.

If you’re worried that the glass in your own home or office poses a danger, consider using decals or netting, as well as turning lights off or closing drapes, to keep birds from being fooled. These are all small steps, but if there’s a lesson to be learned from Galveston, it’s that even one building can have a huge impact. 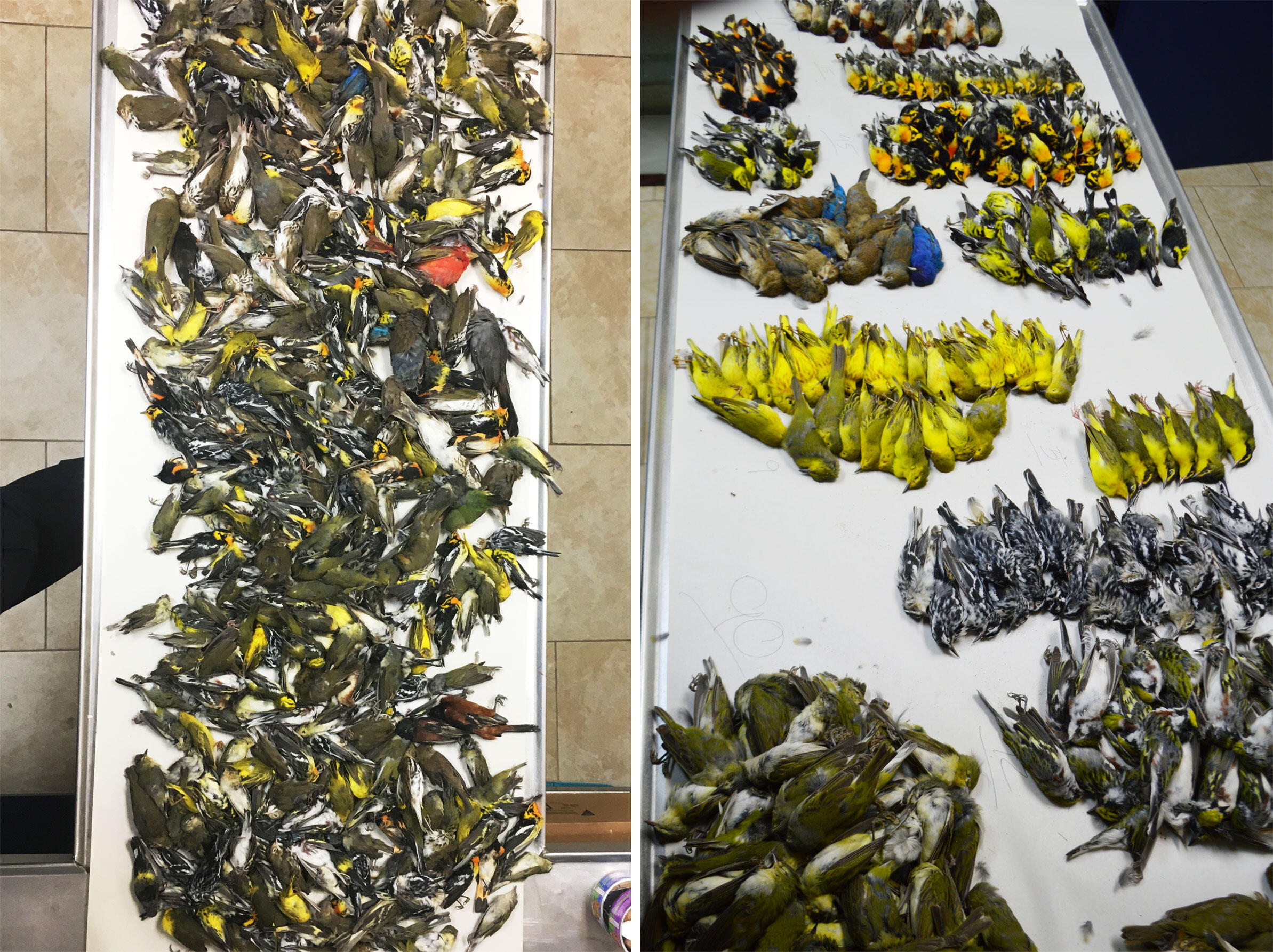 Josh Henderson of the Galveston Police Department painstakingly sorted the dead birds by species to better understand the magnitude of the night's collisions. Photo: Josh Henderson

Think You Have a Bird-Friendly Backyard? Think Again.

Birdfeeders and trees help birds, but they also increase the likelihood of deadly window impacts. Here’s how to make your yard truly bird friendly.

Thanks to D-Bird, citizen scientists are beginning to fill in the gaps on how many birds collide with buildings.

Loving Birds From Inside a Glass House

It's not just skyscrapers that threaten birds—our homes pose a huge risk, too. Here's what I learned when I tried to do something about mine.