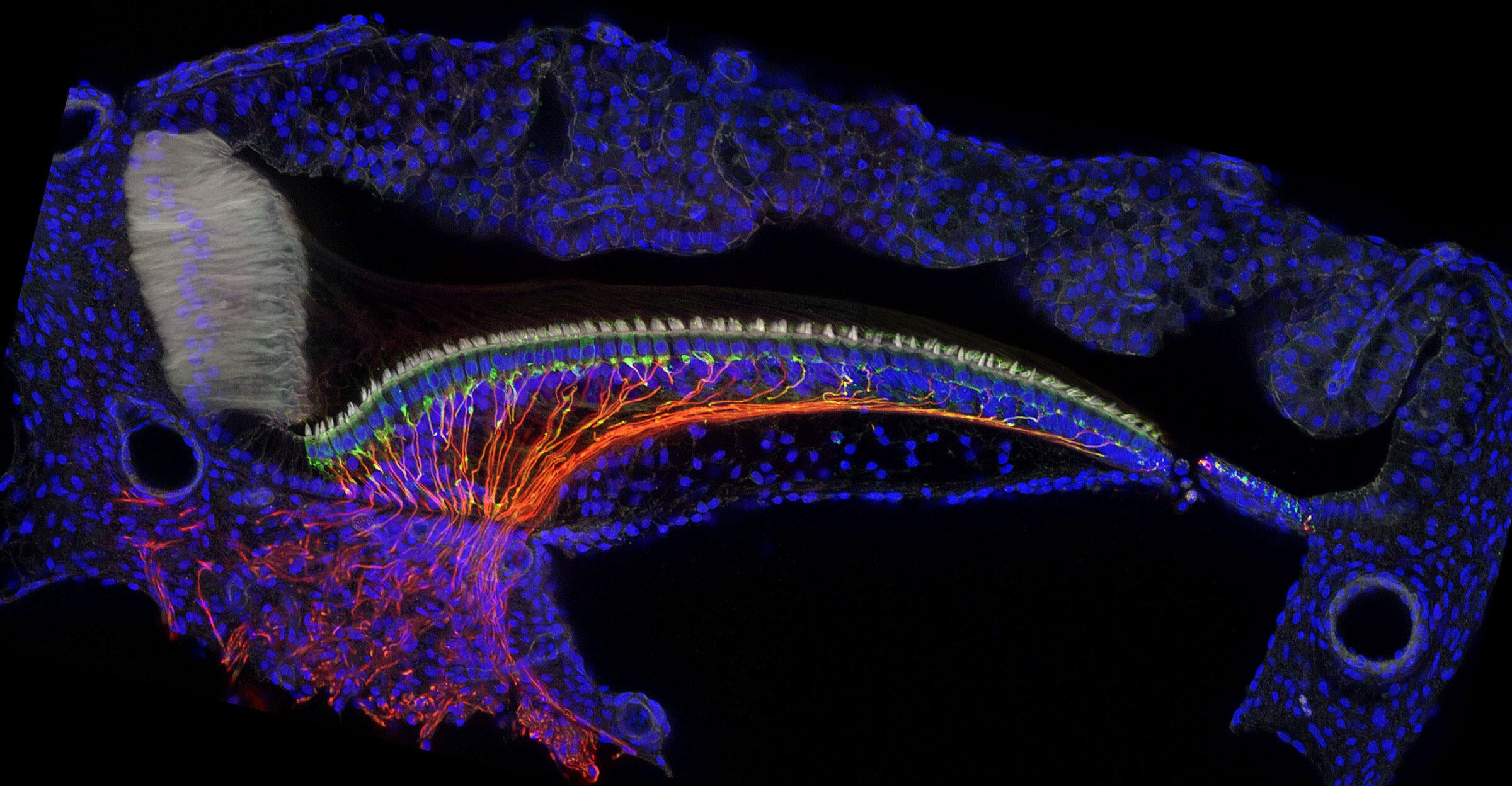 An image of a section of the chicken cochlea in an embryo. The neuronal connections to hair cells can be seen, in red and green, at 20-times magnification.

How Chickens Could Inspire New Treatments for Deafness

Birds can't lose their hearing. So why do we?

Stanford University researcher Amanda Janesick thinks the most interesting thing about birds is that they cannot go permanently deaf. For the last three years, she’s tried to figure how and why—and hopes to find a way to reproduce this in people someday. “The fact that we don’t have a cure for hearing loss is amazing,” says Janesick, who was born with a mild form of genetic hearing loss herself.

Scientists have long known that certain animals— birds, but also fish, reptiles and amphibians—can indefinitely regenerate hair cells inside the cochlea, the cavity of the inner ear responsible for interpreting sound. Most mammalian hair cells cannot do this: Once ruined, the hair cells—which vibrate and help amplify sounds into the cochlea—are gone. With fewer of them, hearing sensitivity drops.

Given advances in microscopy and genetic analysis over the last decade, researchers now have the ability to advance the study of how hair cell regeneration actually functions.

Working with Stefan Heller at Stanford's School of Medicine, Janesick focuses her research exclusively with chickens. She uses imaging technology to “light up” multiple genes in fluorescent colors within the cochlea at a single-cell resolution, allowing her to see their location and which are activated when hair cells regenerate. “Lighting up a gene does not directly tell you anything about the cell’s function, but you can make inferences,” she says.

Recently, through another technique called single-cell RNA sequencing, she was able to measure individual genes present in each hair cell of a healthy chicken cochlea. This is a big first step: to figure out how hair cells regenerate, knowing their genetic makeup helps. Janesick has discovered several new hair cell genes. For instance, compared to mammals, she has found that the chickens might be using a wholly different neurotransmitter to convert sound energy into electric energy that eventually gets transmitted to their brain.

Researchers, however, still don’t know exactly how birds regenerate their hearing ability and also don’t know why birds can do this and we cannot. Mirko Scheibinger, a colleague of Janesick’s who is working on a parallel project involving the chicken's balancing organ, the utricle, believes it is related to the human ear’s complexity. For starters, ours is a spiral shape whereas the bird’s is banana-like; the mammalian one is a “more sophisticated” entity, says Scheibinger.

Another crucial component of Janesick’s project involves studying the damaged chicken cochlea in a live chicken. To do this a chick’s ear is injected with an antibiotic that kills the hair cells (it requires only a very tiny needle, and they do grow back). Two days later, they observed the cochlea with a high-powered microscope during the regeneration process. What they saw, says Janesick, seemed to be a strong immune response to the hair cell damage in the surviving, surrounding cells. Now she’s trying to understand what role, if any, immune genes play in regenerating hair cells.

Whether what she and others are learning about animals’ hearing regeneration ability could one day help humans, Janesick is cautiously optimistic—though it would take years. Most likely, says Janesick, such a therapy could be in the form of chemicals that are injected or diffused into our ears. Manipulation of our genes themselves through gene therapy may also be a possibility, she adds.

Others believe that it is better to focus scientific attention on different animals with the same abilities, such as mice. While most mammals are unable to regenerate hair cells, mice can for a short period of time after birth. Because the mouse genome is closer to ours, its regeneration abilities might be more easily transferable to humans; mice also hear in frequency ranges more similar to us, says Alan Cheng, a Stanford colleague of Janesick’s who studies this in the rodent subjects.

But, in terms of research, he adds that “one is not better than the other. They are complementary.” For instance, notes Cheng, the key to neural regeneration in retinas—repairing damaged neurons in eyes—which has allowed for the development of new gene therapies for the visually impaired, was discovered through studying chickens. Much has also been learned from chick embryology about how our limbs develop, how the cardiovascular system is patterned, and brain formation, to name a few examples. Even though we still know relatively little about the nuances of bird hearing, perhaps one day human deafness will also make the list.