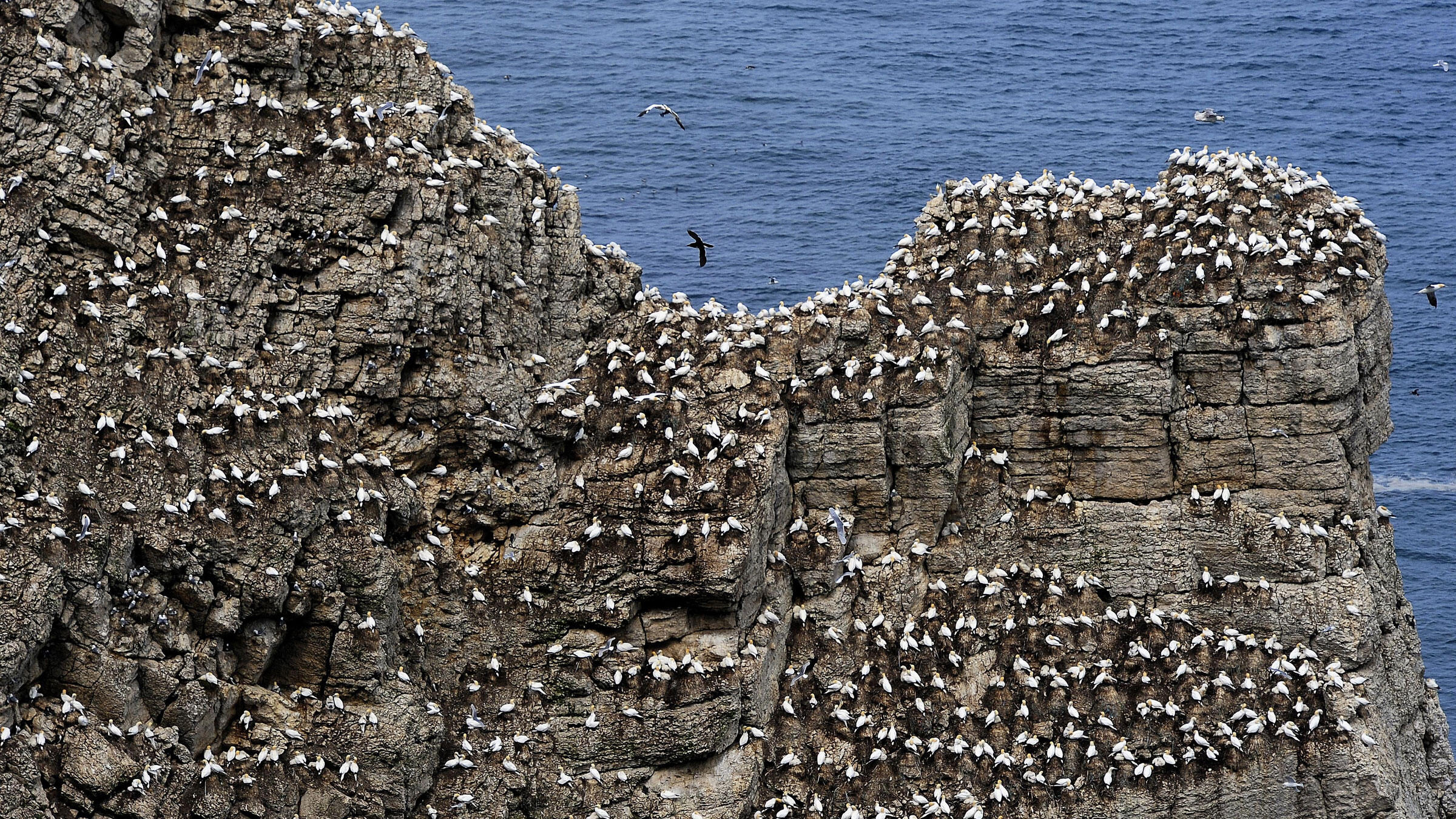 More than 250,000 seabirds, including Northern Gannets and Black-legged Kittiwakes, nest on the Bempton Cliffs in the UK. Photo: John Giles/PA/AP

How To Count a Thousand Birds (Or More)

Bring your binoculars—and a strong stomach.

Spend eight straight hours on a tiny sea boat using only binoculars to count thousands of squawking seabirds, and you'd wake up the next day with something of a hangover, too.

“Your eyes feel like they're on stalks,” says David Aitken, warden at Bempton Cliffs, a nature reserve run by the UK's Royal Society for the Protection of Birds. “It can take me a day to recover!”

Every spring and summer, over 200,000 seabirds migrate to nest and breed on a 10-mile stretch of the chalky cliff, in Yorkshire, England. They form one of the UK's largest seabird colonies; a quarter of a million birds in peak season. Gannets, kittiwakes, herringulls, fulmars, shags, guillemots, razorbills, and puffins gather in a noisy, smelly mass. It’s Aitken's task, as a warden, to count them all.

Why is it important to know exactly how many birds there are, anyway? Since these species are particularly vulnerable to change, declining populations can surface environmental problems. For instance, the kittiwake depends on fish that swim at the ocean's surface, so if kittiwake populations take a dive, it may be a sign that surface warming is driving fish away, or that the birds' food source is being overfished, Aitken says. Because Bempton Cliffs has such a huge colony, population counts could generate important data about the general state of seabirds. “If we don't monitor them, we may miss out on these signals,” he says.

The methods for population counts vary: They can be done manually from land or sea, or by taking aerial photographs to be analyzed later. But in any case, it's bewildering how a counter manages to keep track of several thousand birds and still come up with a reliable estimate.

Success lies in the ability to keep one’s eyes trained on individuals amid a Where's Waldo-style collage of birds, Aitken says. By boat is the only way someone can properly view birds along the sheer, 130-meter-high cliffs. So at Bempton Cliffs, counting also requires a stash of motion-sickness tablets (looking through binoculars on a pitching boat can be less than pleasant), and a calm head when disaster strikes—like one time when the cobble boat broke down and started to flood.

With two skippers to steer, a pair of counters ride in the boat, bearing binoculars and colony maps. These are made out of photographed sections of the cliff, called 'plots' that are uniquely numbered. The wardens count one plot at a time.

To start, they do a practice run. “When you get to the first flock you do a couple of test counts, so you're kind of sync in with each other,” Aitken says. That ensures estimates are roughly the same. “You only get one window to do this in, so you need to make sure you get it right.” Birds have to be counted when the colony is at its peak—something that occurs within a slim margin of time. The actual counting style is a personal choice, Aitken adds. He looks through binoculars as the boat slowly moves along, and his technique is to anchor himself via visual landmarks like crags or vegetation. Then, moving from the top of his line of vision down, he makes a slow, meticulous count, covering slivers of a plot as he goes.

Counts are species-specific, so on one trip he may pick out the populous gannets, or try to differentiate guillemots from their doppelgänger, the razorbill. Whatever the species, it takes about eight hours to get up to 20,000 birds—so birds like kittiwakes, which make up 37,000 pairs on the cliffs, can take days to tally up.

When a count is complete, the numbers are funneled into huge databases like the one provided by the Joint Nature Conservation Committee, the wildlife adviser to the UK government. Aitken's hope is that the long, nauseating hours out at sea may translate into protections for birds, if the numbers indicate that they need it.

When the summer breeding session ends, so does counting season. “From April to July it's chaos. And then they abandon us and it's like it never happened,” Aitken says. By winter, he's hankering for the birds' return.

“There are too many good memories,” he says, and those make up for the sea-hangovers. “I spend most of my time up on the cliffs, looking down at the spectacle. When you’re below the cliffs in a tiny boat, the experience is mesmerizing. Birds above, birds rafting around you, and the towering chalk cliffs all around. It's amazing.”

Do the skills required for such big-scale population counts translate into something any avid birder can use? Aitken thinks so. “Learn to visualize what one to five birds look like, and then tens and twenties of them,” he says. Estimating this way makes counting large flocks quicker—though there's always a margin of error, he notes. The secret there is to cross-count with another birder (if you don't have a birding buddy to help, take a photograph and test your numbers against it).

Ultimately, the main things it takes to count are the most obvious—patience and time. “It's all about what you can hold in your head, and how you build up a spatial picture in your mind,” he says.