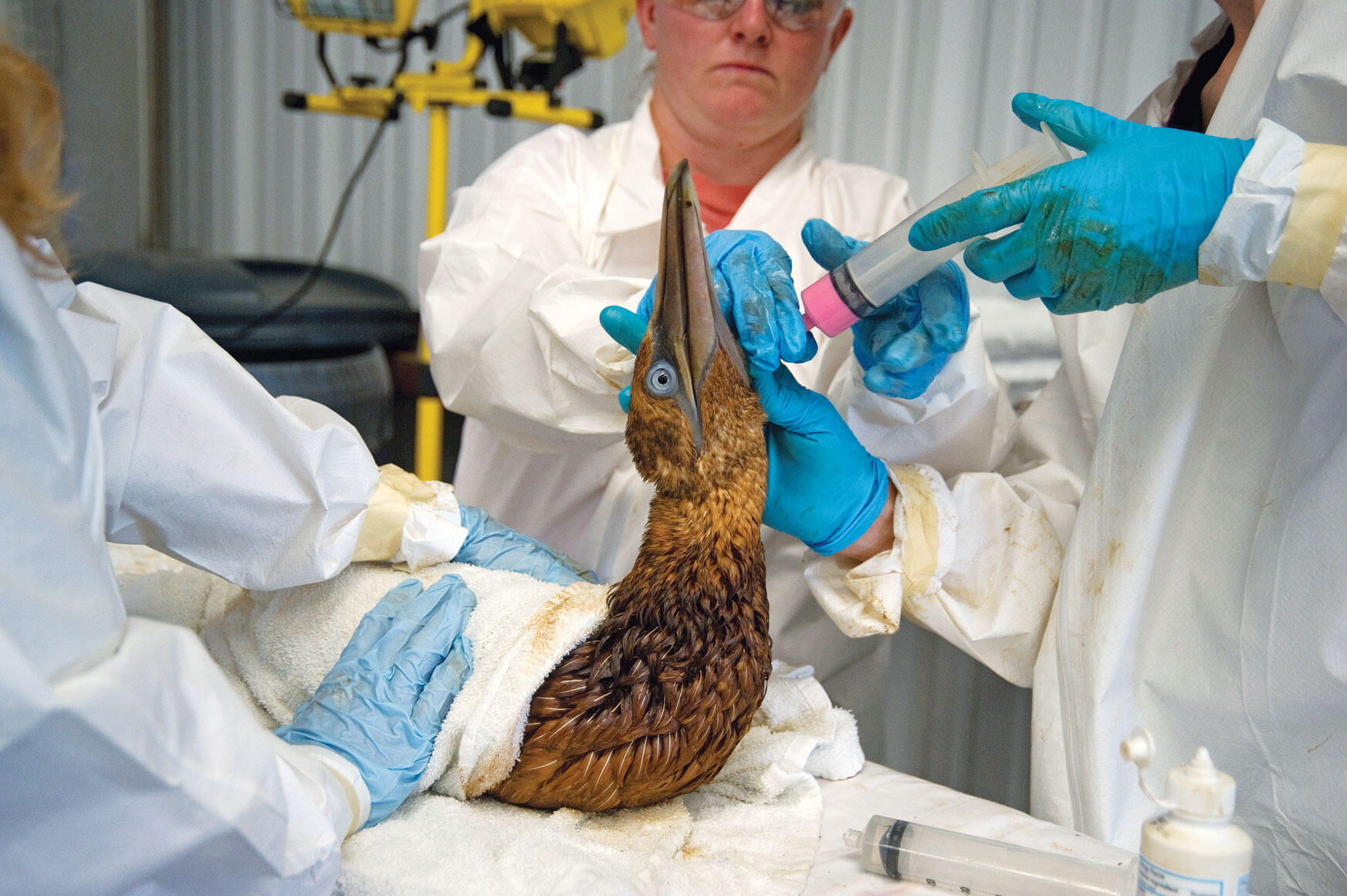 How to De-Oil a Bird

Dish detergent is the key ingredient, but the process takes more than suds.

An oil spill happens and the inevitable image follows: a bird with its wings outstretched and dripping with oil. Barbara Callahan, a responsive services director who works with International Bird Rescue to rehabilitate marine birds, is an expert at getting rid of the gunk.

Callahan has worked in the aftermath of the Deepwater Horizon spill in the United States, the Prestige spill in Spain, and once oversaw the cleansing of 650 African penguins in one day, following the Treasure oil spill in South Africa. “I know it looks like a fun job, but it’s tough,” she says. And, she adds, it’s impossible to save every oiled bird. “It’s difficult to watch animals die.”

Trying to cut that death count is where the dish soap comes in. De-oiling a bird takes vast quantities of detergent—Dawn was the official brand used to cleanse Deepwater Horizon birds—hot water, dryers and a bunch of kiddie pools. It might sound like a simple list of ingredients, but it’s “very complex work,” says Callahan..

Here’s a breakdown of how rehabbers transform birds from oiled back to healthy.

A crack in the dry suit

Oil is particularly dangerous for birds because it disrupts the finely tuned system that keeps them warm. To stay dry, all birds have a layer of downy feathers that trap warm air close to the skin. Visible contour feathers, made up of barbs and barbules crisscross on top to create a Velcro-like structure that encloses the downier layers. Oil breaks open this close-knit arrangement. “The barbs and barbules can no longer lock together, and water passes right through to the downy feathers,” Callahan says. Basically, it “opens a crack in the dry suit,” making the birds susceptible to hypothermia. (Birds are also at risk of dehydration or anemia if they eat oil.)

Rehabbers first draw blood, weigh the victim, and check the bird’s vitals. Then the birds rest for 24 hours. More testing follows, to assess if a bird is healthy enough to survive rehab. “These birds come in such bad condition,” says Callahan. “We have to turn them around very quickly before we put them through cleaning,” It’s a case of prioritizing birds that are the worst off, as well as those that are most likely to survive. But sometimes, struggling birds don’t reach a recovery threshold, which unfortunately means euthanasia for them—a fate far less cruel than setting the bird out to freeze or starve to death, Callahan says.

Those with a fighting chance move on to the washroom, a huge space filled with tubs and dish soap—lots and lots of the sudsy stuff. International Bird Rescue has seen several new cleaning agents and inventions—“there’s even a bird washing machine out there,” Callahan says—but so far they’ve stuck with one candidate: Dawn dish detergent. The soap hits its cleansing peak at a water temperature between 106 and 108 degrees Fahrenheit, which closely matches a bird’s typical body temperature range.

Once a bird is in the water, though, there’s no scrubbing—that would further ruffle feathers. Instead, water is swished around a bird, allowing the detergent to slowly lift oil from the feathers. A gentle hosing frees the head feathers of residue. An individual bird can require multiple tubs of water, and the rehab center can use up to 1,500 gallons an hour.

Washers try to get all the goo off in one session, sniffing the bird’s feathers up close as they rinse. “If you can still smell product you haven’t gotten it clean enough,” Callahan says.

Hose up, dry down

After the wash, volunteers hose the birds down. This is done against the feather grain, at up to 40 to 60 pounds of pressure per square inch in denser parts like the chest. It’s a powerful blast—about half the strength of a fireman’s hose—but birds can take it. Soon, feathers start behaving normally again. “This is where the magic happens,” says Callahan. “All of a sudden those downy feathers start to fluff up and repel water.”

Drying comes next. Depending on the species, it happens either individually or in groups. “Divers are always dried alone, for example, and guillemots feel more comfortable with lots of their buddies around,” Callahan says. As the birds dry, they start to preen their feathers into alignment again, which preps them for returning to open water.

The rehabbers aren’t quite done yet. The birds are moved into rooms full of paddle pools that simulates open water. The birds start out in pools with haul-outs, places where they can leave the water to preen their feathers if they sense a wet spot in their down. Any shivering at this stage is a cue to rehabbers that they need to dry them out some more before they hit the water again. “Pretty soon you see birds staying in the pool all the time,” Callahan says. That’s when you know they’re approaching feather-readiness for the sea.

A bird is finally considered for release once it stays in a pool for 72 hours. These birds are tested and weighed once more before being tagged and set free to fly high and dry.