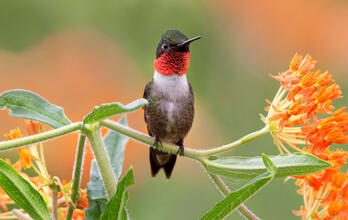 Bird calls aren’t a typical part of Jess Harnly or Liz Curtis’s vocabularies. But as American Sign Language interpreters, both women had to be ready this February when Conrad the Blue Jay, an animal ambassador for the John James Audubon Center at Mill Grove in eastern Pennsylvania, vocalized to their students in a Philadelphia classroom. It was the first day of the Great Backyard Bird Count (GBBC), and not everyone in the room at the Pennsylvania School for the Deaf could hear his voice. As the corvid cawed and rattled, each interpreter touched her own neck to indicate that he was making noise.

Conrad’s visit was the highlight of a collaboration between Audubon and the Pennsylvania School for the Deaf, a PreK–12 school that caters to deaf and hard-of-hearing students by combining English and American Sign Language instruction in the classroom. Steve Saffier, who coordinates the local chapters’ GBBC efforts for Mill Grove Audubon Center, had wanted to increase local participation in the GBBC, a four-day-long global birdwatching bonanza when more than 100,000 birders count birds and submit their species lists to support scientific research. When a colleague suggested enlisting the school, Saffier, who had worked with vision-impaired birders in Los Angeles before joining Audubon, was thrilled with the idea.

The school’s teachers were thrilled, too, and this year made birds a core part of their spring science curricula, developing a suite of avian activities to get students thinking about birds and the natural world around them. Fourth graders, for example, learned about how birds that eat different types of food have beaks of different shapes. The teachers also led hands-on activities before the big day, with middle schoolers upcycling empty seltzer bottles into bird feeders, and special-needs students stuffing peanut butter and seeds into pinecones to attract birds for the GBBC.

“One of the biggest things that we struggle with is getting kids to stop and look,” says Melissa Keeley, an elementary school science teacher at the Pennsylvania School for the Deaf. While that’s normal for all children, it’s particularly challenging with students you’re trying to reach through sign language.

But on GBBC day, students were focused on feathers. “One kid would see a bird, and they would flock to the window,” Keeley says.

On the last day of the collaboration—the first day of the GBBC—Saffier talked each group of students through the basics of bird identification using field markings, and taught them to identify common backyard birds like the Northern Cardinal and Conrad’s wild Blue Jay compatriots.

Conrad took the stage next. “We know that Conrad steals hearts and gets people excited wherever he goes,” says Carrie Barron, who leads educational programming at Mill Grove Audubon center. Barron explained to small groups of students how birds fly, what adaptations give Blue Jays large territories, and why Conrad’s feathers aren’t really blue. The students also cycled through touch stations where they could feel feathers and taxidermy specimens. (Barron doesn’t let students pet Conrad.)

And, of course, the students worked on their bird checklists to submit to the GBBC. They birded mainly from inside the classroom, keeping their eyes on the feeders they’d put out for any visitors. Some students later looked for birds outdoors by walking around campus with their teachers.

Both Barron and Saffier were pleased with how easily they could convey their knowledge and enthusiasm for birds to the students, although they had to put in effort to slow down their rapid speech so that the interpreters could keep up. They also each learned a few signs—basics like “hello” and “thank you”—to best communicate with students as they moved through the classrooms.

The day was such a great success that Barron, who also organizes Plants for Birds gardens at local schools, is working to bring native-plant gardens to the school’s campus. Students from the school will also spend five weeks this summer at Audubon’s Mill Grove Center working on a range of bird-related science and environment projects.

The feeders will remain at the school, too, and Keeley hopes students will keep an eye on them and let her know when they need a refill. She also says some of the students wanted to extend their GBBC experience and bring their bird lists from home, which were added to the 173,826 total checklists submitted to the global scientific effort this year. “They contributed to big science,” Keeley says. “In the classroom, it’s just our own little experiments, so it was really cool to have them be a part of something.”

And for Audubon, it’s a new group to get hooked on birding. Even weeks later, students are still coming to tell Keeley about birds they’d seen. Audubon Pennsylvania already has native-plant and introductory birding programs for middle and high students with special needs, but deaf or hard-of-hearing students make up a new audience for the chapter.

Help Audubon grow 1 million bird-friendly native plants! Just plug your zipcode into our handy database to discover which native plants in your area will attract certain types of birds. It’s fast, easy, and a great way to draw more birds to your yard while providing vital natural habitat.

To Turn a Schoolyard Into an Outdoor Classroom, Just Add Native Plants

With the help of Audubon Minnesota and some controlled fires, a local school recently restored an overgrown field into original prairie habitat.

A writer and birder reflects on the quiet moments spent outside with his autistic daughter.

In Buffalo, New York, gardeners are growing crops and native plants to bring food and wildlife to communities in need.