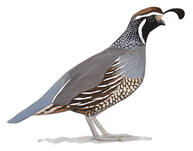 It’s happened to the best of us: You plan out a birding excursion, pick a place to go, and then back out at the last minute because of crummy weather or other life excuses.

Every missed outing is a missed opportunity to practice your identification skills. But if you find yourself stuck indoors, you can use social media to stoke your inner bird nerd, too. Twitter, for one, is a great way to practice challenging IDs. Several birders and ornithologists have created special hashtags that guide users through tricky photo quizzes. (You’ll need a Twitter account to join the conversation, but you can follow the quizzes without one.)

We talked to the people behind four popular hashtags to get the scoop on how they approach bird-ID challenges. (Note that while most of these quizzes are slated for a set time each week, schedules are bound to change. These birders have day jobs.)

Helping people identify big black birds is Kaeli Swift’s mission in life. As a PhD student researching corvid behavior at University of Washington, she’s seen people misidentify crows and ravens on social media many a time. “It’s not unreasonable that people might have a hard time distinguishing them,” she says. But she can't help but barge in and correct them. “When it comes to stuff like that, I’m definitely the fact-checking police," Swift says.

Inspired by #CougarOrNot, a Twitter thread that distinguishes cougars from bobcats, domestic cats, and stray deer, Swift decided to start her own identification game to give players a feel for what it’s like to tell corvids apart during research work. “Often when we’re in the field, we can’t quite make out all the field identifications, or the lighting is bad, or the bird is far away,” she says. On Twitter, she pairs snapshots of birds with the hashtag and waits for users to make their best guesses before revealing the answer. (Learn how to distinguish between ravens and crows with our guide.)

Another upside to the Twitter game: “It was a good opportunity to use those crappy field photos, of which I have many,” Swift says.

Within the past couple of weeks, Swift has expanded the choices to include the ʻAlalā, or Hawaiian Crow. The shape and size of the bill (shorter and more curved than a Common Raven’s) and the matte feathers (unlike an American Crow’s glossy sheen) are the key clues. The Hawaiian Crow also has slightly longer legs, but Swift notes that this isn’t helpful in the field when there are no other species for comparison.

This hashtag is unique for a few different reasons. First, it doesn’t rely solely on field marks like the others. Second, it includes birds from all over the world—that makes for more than 10,000 candidates. Created by Alex Evans, a PhD student studying bird flight at the University of Leeds, the quizzes focus on a distinct feature of birds: their head crests, which he says are avian ads for “sexual impressiveness.”

To set up the challenge, Evans crops bird images to show the crests only. After letting people guess at the crest's owner for an hour, he offers a clue—some detail about the species’ habitat, ecology, or behavior. Google is your best friend here, if you want to solve the puzzle: You can craft your search around details of the crest, information gleaned from the background of the photo, or the tips dropped by Evans.

Clue at 3pm GMT and answer at 4pm GMT! pic.twitter.com/aySyXx8wEc

Sometimes the general style of the crest is helpful enough. In this example, the plain, dark look seems out of place for the tropics, where you might expect to see flashier colors. Evans’s clues—a North American bird that enjoys a relaxing dirt bath—point to the California Quail as the closest match. The outline of the crest helps confirm the ID. “It’s quite an iconic shape, where it starts quite small and then fans out to be larger and more prominent at the top,” Evans says.

Know of any other fun bird-ID quizzes on social media? Leave us a link in the comments.