This week, at a New York City park, a House Sparrow vigorously assaulted a pizza crust twice the length of its body. The three-inch bird didn’t get much out of it, wrenching off a crumb here or there as I watched from a nearby bench. But I admired its perseverance regardless, because I know something the bird doesn’t: That the species' love of starchy treats is key to its world domination.

Similar scenes are familiar to people living on all continents except Antarctica, but as it turns out, only in recent history. House Sparrows were restricted to Eurasia until about 200 years ago, when they tagged along as Europeans colonized the world—sometimes hitching rides on ships, and sometimes intentionally transported to new places by people.

“As human technology has developed, House Sparrows have dispersed much farther than they would have by themselves," says Aaron Schrey, a population geneticist at Georgia Southern University who has studied the invasion genetics of the House Sparrow. They were introduced to the United States in the mid-1800s, and expanded to Canada and Mexico by the early 1900s. They made it to Australia and New Zealand in the 1860s, to South America by the late 1800s (first to Argentina, then Chile and Brazil), and to Kenya around 1950. Wherever they land, they compete with native species for food and nesting cavities.

Now, new research published this month by the Royal Society shows that the relationship between humans and House Sparrows goes back much further—some 11,000 years and to the invention of agriculture. Scientists from Norway, Iran, and Kazakhstan sequenced the genomes of House Sparrows found throughout Eurasia, and found that the urban birds split from the wild population right around the time when farming was developed in the Middle East.

The research links the House Sparrow's’ global success to a pair of genes that let the birds eat and digest starchy grains.

Interestingly, the research links the species’ global success to a pair of genes that let the birds eat and digest starchy grains—and that aren't found in a relict population of non-urban House Sparrows confined to the Central Asian steppes. (Unlike most House Sparrows, these birds migrate, eat only natural grass seed, and are cautious around people.) One gene, COL11A, regulates beak and skull development, which the scientists suggest gave urban sparrows a larger beak and more robust skull to crack open tougher seeds used in farming. They also found that urban sparrows have the gene AMY2A that encodes the enzyme amylase, which helps digest starch, those complex carbohydrates found in our staple crops like potatoes, wheat, and corn. Amylase genes in humans and dogs are thought to have driven adaptations to high-starch diets in both species after farming took off.

Genomic studies that identify adaptive genes sometimes fall into the trap of telling evolutionary just-so stories, so I asked Suzanna Lewis, who leads the development of gene-annotation standards at Lawrence Berkeley National Laboratory, what she thought of the new work. While she would have liked to see more on how the researchers identified these genes, she is satisfied by the analysis and reassured by their cautious statements. “Green light, I would say,” she wrote in an email.

Schrey, who was not involved in the new study, agrees. "You don’t see stuff that clean most of the time," he says. "The new genetic techniques are powerful in such a way that they're changing the way people think about how evolution happens."

The findings hew closely to the story told by other genetic studies of House Sparrow populations around the world, says Schrey. The species followed human migration patterns from the Fertile Crescent through the Middle East, slowing down when they hit mountains on the Asian border while continuing to spread north and west into Europe. “They essentially map the spread of farming technology through Eurasia and the Middle East,” he says. “They started living close to human shelters, eating human grains, and going wherever humans go—and humans go everywhere.”

Most species picked up and dropped into a new environment wouldn’t be able to survive and adapt, but because the House Sparrow can digest agricultural grains, they thrive pretty much anywhere—as long as it’s near people and our foodstuffs.

On a broader scale, the research can help us better understand “what makes a species become commensal” and learn to thrive near people, says Lynn Martin, a University of South Florida professor who studies modern House Sparrow evolution in Kenya and was not involved in the new study. “It’s important to learn as we push our wildlife into closer contact with us. Understanding how that happened in the past could help us in the future.”

So next time you see a House Sparrow snacking on pizza or popcorn or a stale dinner roll, don’t deride it as just another urban pest. Instead, consider the species’ deep evolutionary story—one that goes back some 11,000 years and is inextricably bound to our own.

Hannah Waters is a senior associate editor at Audubon. A low-key birder with a background in ecology and evolution, she’s passionate about chickadees and seabirds. Read her cover story from the Winter 2017 issue, and find her on Twitter: @hannahjwaters. 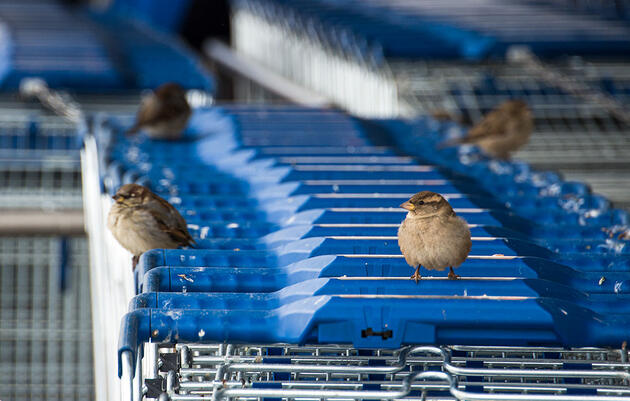 What Happens When Birds Invade Stores?

To deal with feathered squatters like doves and sparrows, businesses turn to rescue and removal experts. 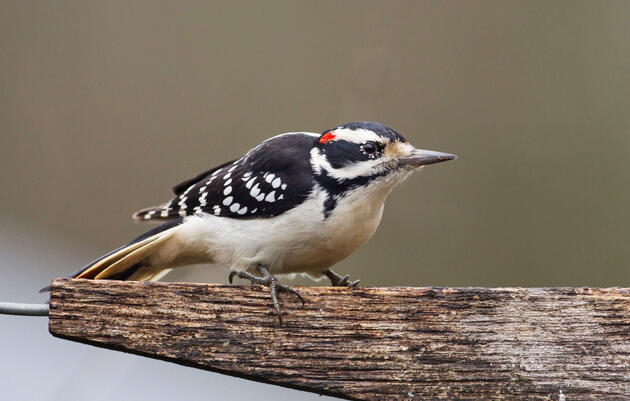 Get to Know These 15 Common Birds 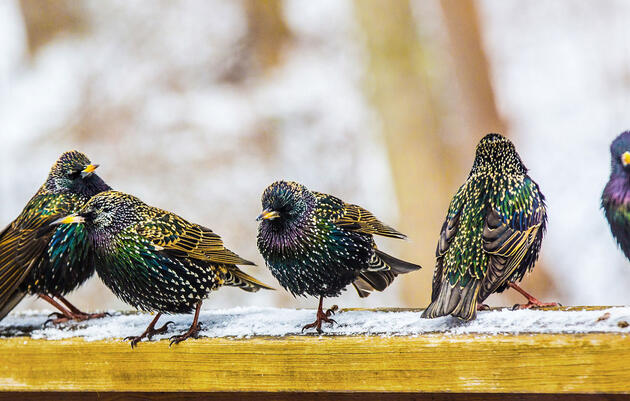 You don’t have to love every species. Here are some good candidates for your less-than-favorite birds.