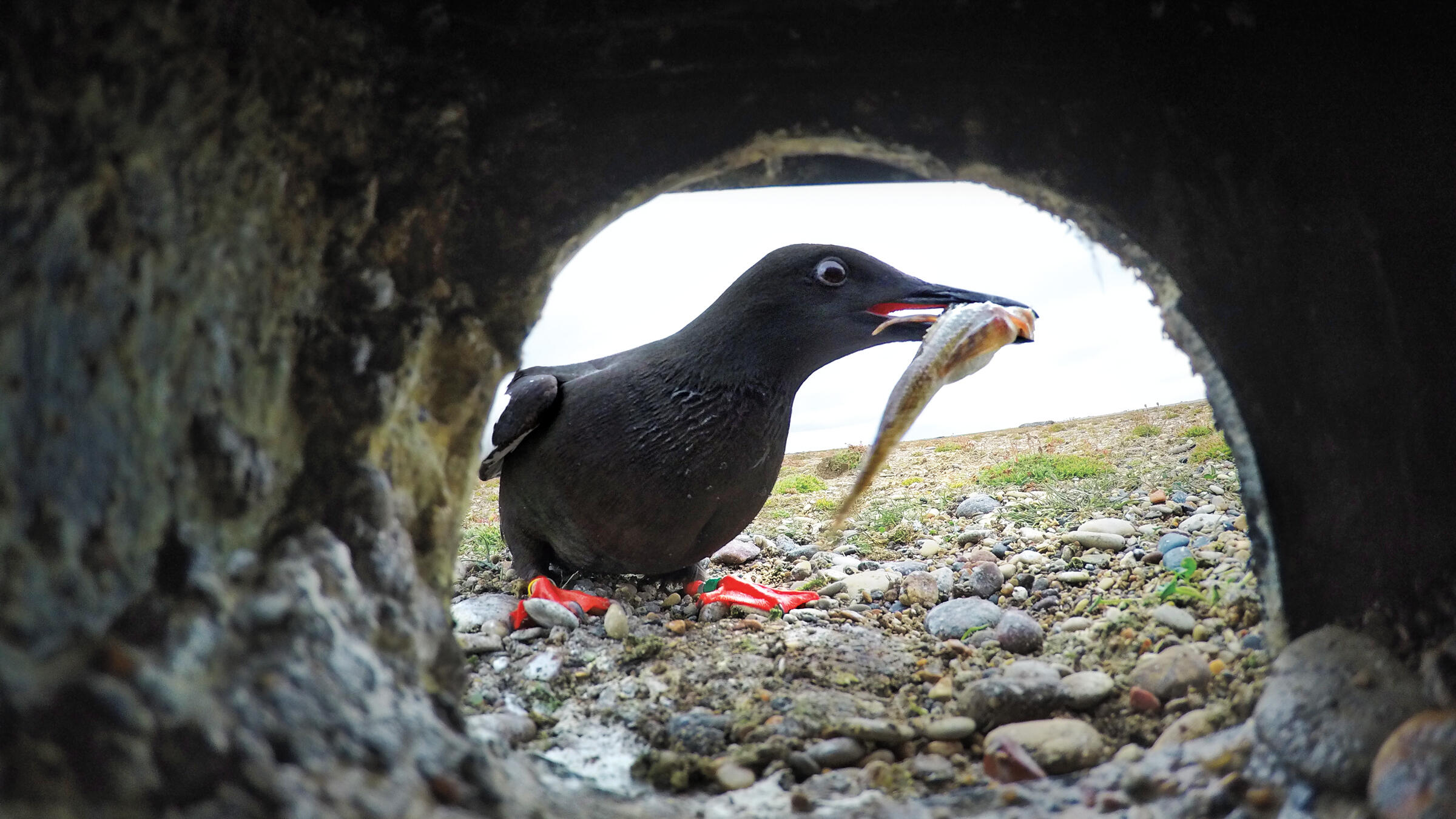 On Cooper Island, there aren’t many rules. But one rule that is wordlessly respected is you never look directly at South Beach, because South Beach is the designated bathroom, sited on a gravel sandbar so flat you can take a headcount of all inhabitants from a mile away, no lenses required.

Another rule is you shouldn’t go out alone, but if you do, you should take a walkie-talkie and a shotgun, because you never know when a polar bear might show up, and if one does, you don’t want the polar bear between you and the cabin, the only structure on the island that might sustain a clawed assault.

Not that I know how to fire a shotgun, much less how to disable a starving bear keen on making me its meal. But rules are rules, so I carry one anyway.

When camping on an island a short boat ride from the northernmost point of Alaska, it’s difficult not to fixate on the bears, one of the few remaining animals that make humans prey. When bears do visit, though, they’re still not the most charismatic megafauna on Cooper Island. That distinction goes to George Divoky, a septuagenarian who’s spent nearly 11 cumulative years here. By the time I reach Cooper Island on August 7, Divoky has been here for two months. Between his mop of gray hair and unkempt beard—there are no mirrors in the South Beach bathroom—shine bright darting eyes that don’t miss much. He wears what you might expect of an Arctic field ornithologist: rain pants and a parka flecked with splatters of bird poop and undergirded with wool-sweater strata.

For 43 years, Divoky has spent every summer here, usually in a tent, and usually by himself. But the colony of Black Guillemots holds an even greater claim to the place.

But few remember Divoky for his appearance; it’s the words that pour from his mouth like water from a burst dam that define him. Any object in his periphery can inspire a story, told in fractal spurts and with oppressive detail, and if he’s interrupted—by a question, a task, another thought—he’ll return to his story minutes later, as if the world paused in wait of his next word.

His lingual floodwaters can be disorienting and, to some, off-putting. A lifelong outsider in self-imposed exile, Divoky commands a conversation and is prone to unwittingly drowning out its more subdued participants with his contrarian convictions. But it’s hard to blame him, for you, the conversant, are the odd one here on Cooper Island, a mere visitor in his world. For the past 43 years, he’s spent every summer here, usually in a tent, and usually by himself.

Even so, the island’s other seasonal inhabitants—the colony of Black Guillemots that nest here every summer—hold a greater claim to Cooper than Divoky. They are the reason he’s here, and their progenitors were here first. It was July 6, 1972, when a Coast Guard icebreaker dropped him off for a seabird survey, that he discovered 10 pairs of the handsome seabirds nesting under scattered debris—ammo boxes, floorboards, and innumerable wood planks—abandoned by the U.S. Navy after the Korean War. His find was a northern range expansion for the species in Alaska. 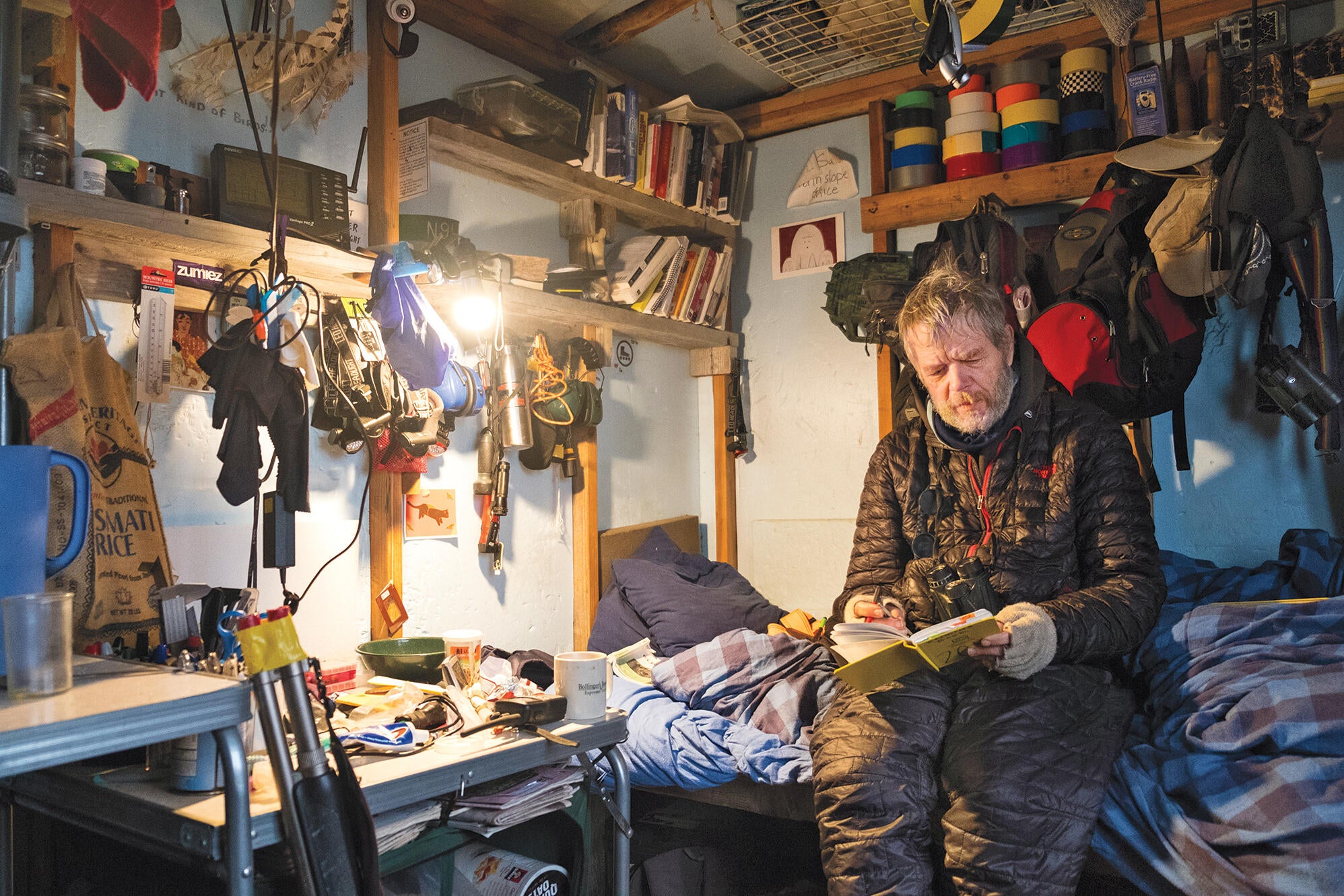 George Divoky sits on his bed in the one-room cabin where the island's human inhabitants gather to cook, eat, warm up, and socialize. Photo: Peter Mather

Like a kid flipping rocks to find salamanders, a 26-year-old Divoky flipped boards and boxes to search for eggs and create new nesting crevices. By the end of the summer, his nest count for the island was up to 18. When he returned to Washington, D.C., for a fellowship at the Smithsonian, he couldn’t stop thinking about Cooper Island. He was struck by the scientific potential of its accessible nest sites and seduced by the opportunity to indulge himself in solitary nature. He soon relocated to Fairbanks, Alaska, and by 1975 got his hands on enough funding to return to Cooper Island for an entire summer. He hasn’t missed one since, serially sacrificing employers and girlfriends who demanded he choose between them and the guillemots.

Divoky returned each summer to watch the colony mature, collecting meticulous data—growth, breeding, feeding, kinship—on every nesting pair and chick, and banding every adult and fledgling. The colony thrived, and grew to 200 breeding pairs by 1989. Since then, it’s taken a turn for the worse, slowly at first and then into free-fall, and Divoky now cares for an island and its birds in decline. “I used to see chicks hatch, and I’d see them grow, and they had an 85 to 90 percent chance of flying away,” he says. This year 85 pairs bred on the island, fledging just 45 chicks out of 120 hatched—not enough to maintain the colony’s population. 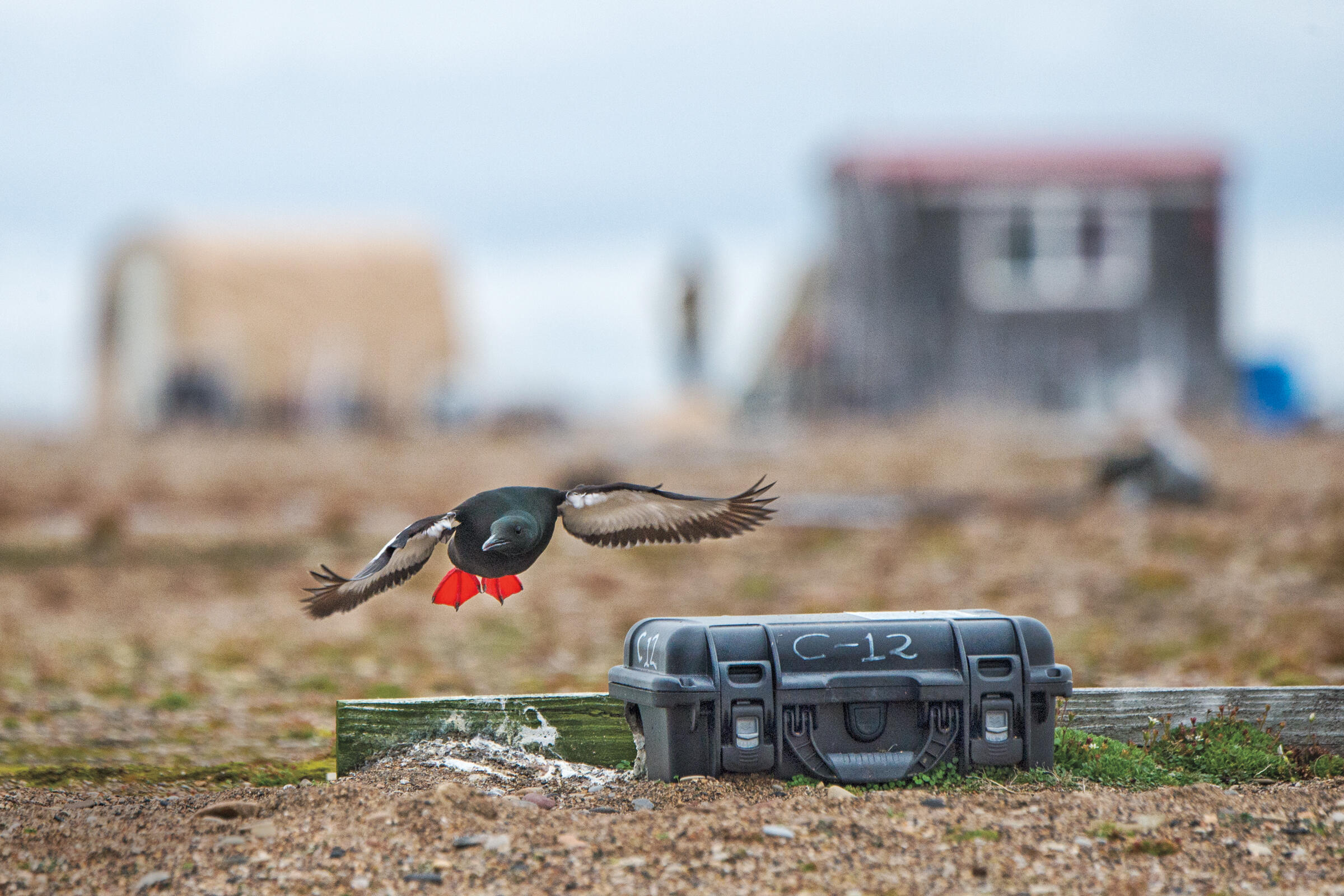 Nearly all the causes for this decline—changes in food, competitors, and predators—track the warmer air, warmer ocean water, and retreat of sea ice near Cooper Island, all symptoms of global climate change caused by carbon dioxide. These molecules build up in the atmosphere and trap heat, like the layers of blankets required to sleep through the night on a sandbar on the Beaufort Sea. Somewhat ironically, if it weren’t for climate change, guillemots may never have nested on Cooper in the first place: Until the late 1960s, snow blanketed the ground for too much of the summer.

“During my research lifetime, Cooper Island will no longer be able to support this species,” Divoky says. “It went from too cold to too warm. It should have taken centuries, not decades.”

And yet he keeps coming back to watch his beloved island decline, collecting as much data as he can along the way. Through his ruthless devotion, Divoky has created one of the few ecological studies with enough long-term, rigorously collected data to illuminate how climate change will force populations through an evolutionary bottleneck unlike any seen since the last ice age. And the only reason we have even this glimpse is because of Divoky, a rare bird indeed.

How a Breeding Colony Loses Ground

Every summer, Mandt’s Black Guillemots gather at Cooper Island to breed. A single pair—they mate for life—may produce about two dozen chicks during their 20-year lifetimes. But since 1990, the guillemots’ numbers have been dropping; fewer of those chicks are surviving to adulthood. Because George Divoky has collected 43 years of data at Cooper Island, it’s possible to see why. 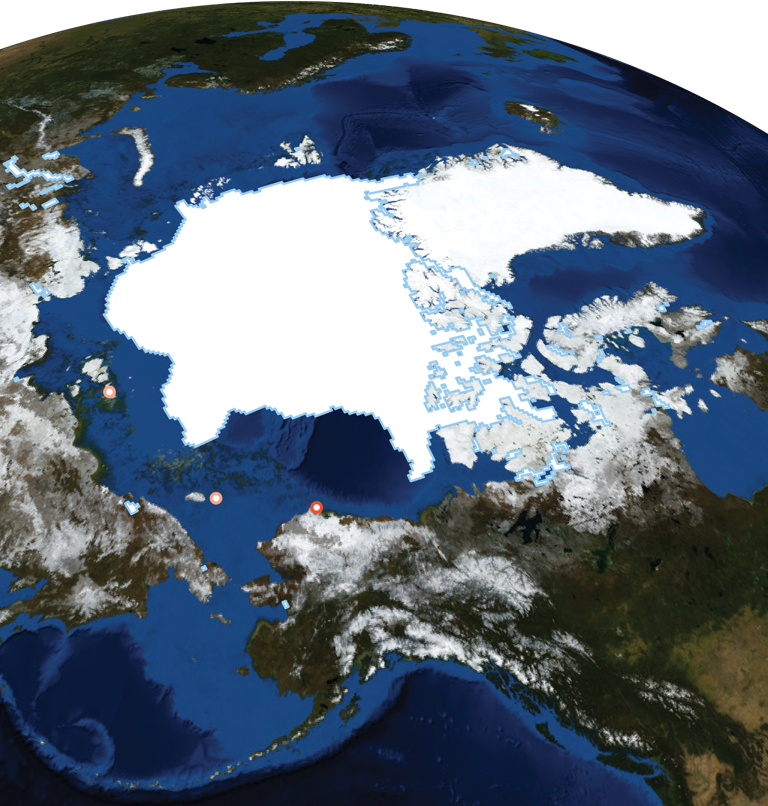 1: Because the Arctic is warming, sea ice is farther away during the summer breeding season.

Cooper Island was once ideally situated for Mandt's Black Guillemots, which hunt along the sea-ice edge. But since 2003, offshore waters have grown warmer and more ice-free by September—and less favorable to prey. Shown here: September sea-ice extent by year.

2: Arctic cod are following the ice north, so Mandt’s Black Guillemots must rely on fourhorn sculpin.

Arctic cod tend to track the ice edge, where they feed on plankton common along the edges. When sea ice is near Cooper Island, Mandt’s Black Guillemots feed the cod to their young almost exclusively. But in the widening open sea, guillemots catch fourhorn sculpin instead. Sculpin are the same size as cod, but their bonier bodies are more difficult to digest.

Percent of chicks that starved before fledging in a typical year

From 1975 through 2002, cod dominated chicks' diets for the entire season. But since 2003, the dominent prey has shifted mid-summer to sculpin each year except for 2006. When sculpin take the place of cod, chicks grow more slowly—and more of them starve.

4: And guillemots have more predators, too.

As Arctic waters have warmed, polar bears that used to hunt from atop the sea ice have made their way to Cooper Island instead, and the number of Horned Puffins has also increased—with deadly consequences for guillemot chicks. In 2009, puffins and polar bears together took 80 percent of the chicks. They've killed fewer chicks since 2011, when Divoky installed predator-resistant plastic nest cases for the birds.

Percent of guillemot chicks killed each year by predators

5: Too few chicks survive, so the numbers drop.

With worse food sources and more predators, fewer chicks than ever are fledging from Cooper Island. Today, each breeding pair fledges 0.5 guillemots annually on average—far behind the 1.1 needed to hold the population steady.

very day goes about the same on Cooper Island. We get up, share breakfast in the cabin, and begin the rounds: visiting every nest to check up on the chicks’ growth.

Divoky gingerly lays his shotgun on the ground, then sits cross-legged in front of a nest and slowly lifts its lid until rasping peeps resound from the interior—that’s the chicks. Working quickly, he scoops up a black fluffball, places it in a bag to weigh it, scribbles its weight in his notebook, presses its wing to a six-inch ruler, scribbles its length in his notebook, and then releases the chick back to its nest. He repeats the process with the second chick, if there is one.

When a guillemot chick hatches, it weighs 35 grams (a little over an ounce). To survive its first winter at sea, it needs to bulk up by an order of magnitude, reaching 350 grams within five weeks, and grow wings long enough to navigate rough waters—rapid development requiring a lot of fish to fuel it. Mandt’s Black Guillemots, a subspecies that lives wedged between Alaska and Russia along the sea ice edge, specialize in one fish: Arctic cod. They’re fatty and common and easy to find because they feast on plankton blooming at the ice edge, a visible landmark. Parents spend their days winging to the ice to catch cod and ferrying it back to insatiable chicks. To keep track of the parents’ comings and goings, Divoky added a few data-collection gadgets in recent years: geolocators to follow their locations year-round and, during the breeding season, time-depth recorders to let him calculate how far, how deep, and how often guillemot parents dive to chase fish.

A guillemot chick’s view from the inside of its nest on Cooper Island. <span class="