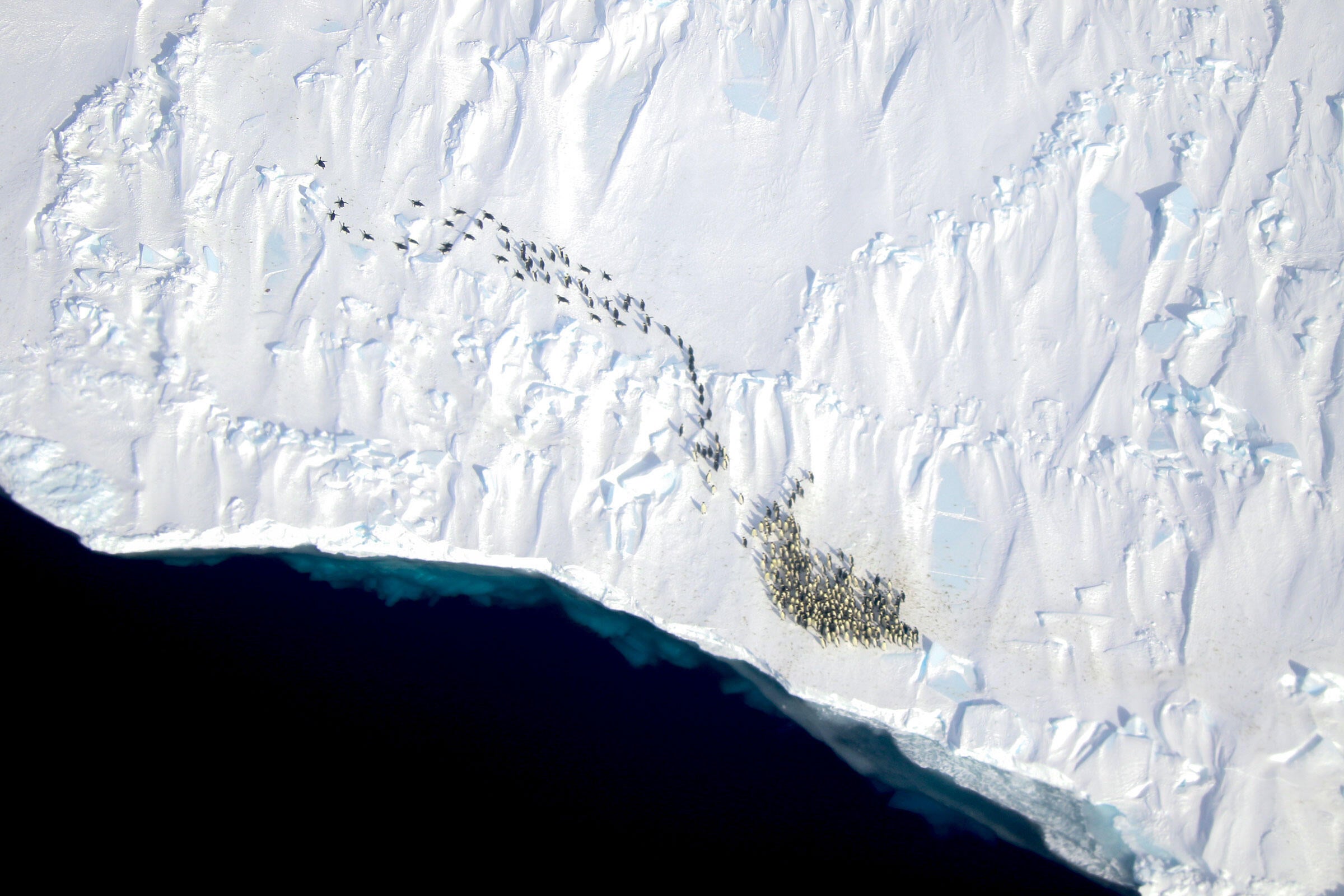 Emperor Penguins march across the ice near Cape Crozier, Antarctica, the site of one of the species' largest breeding colonies. Photo: Sara Labrousse/Permit ACA 2019-006

Point Géologie, off the coast of Adélie Land, Antarctica, is an ice-locked island chain that ranks among the most inhospitable places on Earth—unless you’re an Emperor Penguin. From April to November, it is home to one of the world’s best-documented Emperor Penguin colonies. More than 7,000 seabirds congregate along this desolate archipelago to breed on a particular type of platform: land-fast ice, a kind of sea ice that stays connected to a coastline or glacier instead of floating free.

Using multiple 39-year datasets, an international research team recently stitched together the most comprehensive study to date of the relationship between Emperor Penguin breeding and land-fast ice. They found that a single iceberg, which collided with a glacier near the colony in 2010, led to a build-up of ice that indirectly caused many chicks to starve. The study, published in Biology Letters, shows how penguin populations can be deeply affected by small changes in their icy environment, which will grow more unpredictable as the region warms due to climate change.

“It’s not often that people will go back through this historical data,” says Sara Labrousse, a marine ecologist at Sorbonne University in Paris, France, and one of study’s lead authors. She and her team pored through 39 years of satellite images, weather reports, and Emperor Penguin reproductive records, searching for trends to explain why penguins bred successfully, or not. The work was tedious. “There was a lot of trawling through the archives,” says glaciologist Alex Fraser of the University of Tasmania, who was also involved in the research. “In the end, we got this really high-quality data set.”

“Emperor Penguins are, I think, a really good canary in the coal mine,” says Phil Trathan, head of conservation biology at the British Antarctic Survey, who was not involved in the study. The birds depend on ice for breeding, and they aren’t hunted by humans. “So if we see changes in Emperor Penguins, the most likely factor causing that will be climate change.”

The focus on land-fast ice makes this study especially noteworthy. Most research on Antarctic ice has focused on free-floating sea ice, which often breaks up into smaller platforms used by large, semi-aquatic animals, such as penguins and seals, for fishing or resting. However, unlike their parents, which are insulated from the cold by thick blubber and water-resistant feathers, baby penguins can’t make use of floating sea ice. “Chicks are all downy and fluffy; they’re not waterproof,” says Gemma Clucas, a seabird biologist with the Cornell Lab of Ornithology who was not involved in the study. The chicks need to stay on stable land-fast ice until they fledge—otherwise they risk drowning or freezing to death in the bitterly cold water.

Even though land-fast ice is crucial to Emperor Penguin breeding, it remains understudied. “It’s really hard to model fast ice,” Fraser says. Land-fast ice is highly variable, influenced by factors from storms to icebergs to the tensile strength of the ice itself. These elements make it difficult for scientists to create accurate projections. And it means that the ice doesn’t always behave in predictable ways.

Take, for example, the ice around the Pointe Géologie Emperor Penguin colony. Previous studies looking at how Emperor Penguins will respond to climate change have assumed that land-fast ice will melt as global temperatures warm, leading to massive declines in penguin numbers. However, the amount of fast ice in this particular spot has actually increased over the last decade. Why? “A lot of the answer lies in icebergs,” Fraser says.

Back in the 1980s, a massive chunk of ice broke off from an Antarctic ice shelf. The newly formed iceberg crept slowly around the coastline, eventually colliding with another glacier in 2010, where it stuck. This event led to a buildup of fast ice around the Géologie Archipelago, adjacent to the Emperor Penguin breeding ground.

Though the breeding site itself is situated on the land-fast ice, it is tucked away between two islands, safe from predatory seals. The distance from the colony to the ocean-facing edge of the ice fluctuates depending on ice accumulation. In years where the land-fast ice around Point Géologie extended more than 40 miles out to sea, more than half the colony’s chicks perished. When the edge of the ice is that far away from the colony, penguin parents have to work harder to bring home food. “It means they will take much more time to reach the ocean and come back,” Labrousse says, “and so the chicks can starve and will ultimately die." Due to the continued fast-ice buildup from that lone 1980s iceberg, chick mortality skyrocketed between 2012 and 2014 before rebounding somewhat in recent years. Overall, the number of breeding pairs at Point Géologie has decreased from 6,075 in the early 1970s to around 3,500 today.

Many climatologists predict an increase in wayward icebergs as warming seas weaken once-stable glaciers. Each of those icebergs could create more unexpected land-fast ice deposits near penguin breeding colonies—or they could cause ice to melt, depending on location and local weather conditions. Either way, it means an uncertain future for Emperor Penguins, which, with an estimated 595,000 birds as of 2012, are already the least numerous of all Antarctic penguin species, eking out a living on one of the most inhospitable places on Earth.