Emperor Penguins Are Marching to Extinction at Current Emissions Levels

A new study once again underscores that we need to limit global warming to 1.5 degrees Celsius to save many of our most beloved bird species.

Despite the fact that most people have never seen an Emperor Penguin in real life, the gold-necked seabird feels intimately familiar. Perhaps it’s the species’ starring role in numerous films, or its majestic form that is a favorite of nature photographers, or maybe it's just the bird’s charismatic personality. Whatever it is, it’s difficult to imagine a world in which Emperor Penguins are no longer waddling in formation through a snowstorm or belly-surfing on the icy Antarctic landscape.

But such a scenario is on track to becoming a reality, according to a study published in November. A collaboration from a group of esteemed international scientists spent 10 years building a penguin population model, which projected that 80 percent of Emperor Penguin colonies are threatened with extinction by the end of the century if we continue to emit greenhouse gasses at present levels. The study also offers some sense of hope: If we limit emissions and keep warming below 1.5 degrees Celsius above pre-industrial levels, only 19 percent of the species’ colonies will go extinct by 2100.

The findings line up with Audubon’s recent science report Survival By Degrees: 389 Bird Species on the Brink, which also points to 1.5 degrees Celsius as the magic number, in this case for improving the chances of survival for hundreds of North American bird species.

For Emperor Penguins, the primary impact of global warming is the loss of sea ice, their essential habitat. The species depends on the ice that extends out from the shore—known as “fast ice”—as a home base for breeding and raising chicks. Even during the non-breeding season, sea ice remains necessary as a platform from which they feed, molt, and seek refuge from predators.

“The penguins need sea ice in their habitat just like songbirds need trees,” says David Ainley, an independent penguin expert who was not involved in the study. “Emperor Penguins form colonies in May, lay their eggs in June, and don’t fledge chicks until the end of December, so they need that ice to stay in place during all that time, and it has to be reliable.”

Currently listed as near threatened by the International Union for Conservation of Nature, the species will likely become more vulnerable as temperatures rise, causing sea ice to melt. Through their study, Jenouvrier and her team aimed to predict how warming-induced habitat loss will diminish the seabird’s population by the end of the century.

These numbers are scientifically recognized as thresholds of an unsustainable world. The 2-degrees mark is the Paris Climate Agreement’s official target; however, it is only by limiting warming to 1.5 degrees that we can avoid drastic impacts such as the loss of coral reefs and four extra inches of global sea-level rise threatening an additional 10 million people, according to the United Nations.

The scientists then combined the NCAR model with a penguin population model that they have been developing for 10 years to determine how each of the 54 known Emperor Penguin colonies would respond to the projected changes in its local sea-ice habitat.

In the scenario where no action is taken to limit climate change, annual mean Antarctic sea ice extent will decline by 48 percent, driving 80 percent of the colonies to quasi-extinction (a decline of more than 90 percent) by 2100. “In the case that we don’t reduce emissions, the ice-free season, which in some of these areas can be a month or two, would be much increased,” says co-author Marika Holland, who is an NCAR climate scientist. “And in some areas there would be an almost complete loss of sea ice.”

This means that Emperor Penguins will lose the ground on which they lay eggs.

This means that Emperor Penguins will lose the ground on which they lay eggs. And once chicks hatch, the ice will start breaking before they have developed their waterproof plumage, thereby decreasing the fledgling survival rate. Ultimately, the loss of future generations will cause breeding colonies to diminish and eventually culminate in extinction.

The models account for the fact that penguins can and will move to find more suitable habitats, but even dispersing and relocating have little impact on colonies’ longevity, the study found. “We’re still not totally sure why that’s the case, but it seems to me the explanation is that these colonies are already in really good spots that are likely to have sea ice into the future, so dispersing farther isn’t going to help them,” says co-author Michelle LaRue, an ecologist who led the dispersal element of the model.

It’s not news to the science community that Emperor Penguins are threatened by climate change, but Jenouvrier gives this message new meaning by framing her study through the lens of the three climate scenarios. In the 2-degrees scenario, one third of the colonies go extinct, and in the 1.5-degrees scenario, only 19 percent go extinct.

“Until now we were just warning and giving gloomy images about that’s going to happen,” says Yan Ropert-Coudert, research director at Centre d'Etudes Biologiques de Chizé in France who was not involved in the new study. “But Jenouvrier has the intelligence of using the model to say, ‘If we do what we should do to reduce greenhouse gases, penguin colonies are going to be sustainable.’ That’s the message we were missing.”

A similar call to action is presented through Audubon’s climate report on North American bird species. Scientists found that by limiting warming to the critical 1.5-degrees mark, we can increase the chances of survival for 76 percent of nearly 400 bird species vulnerable to extinction in a 3-degrees-Celsius warmer world.

“For me, what this Emperor Penguin study shows is policy and science need to go hand-in-hand, and we really need to work together on this,” LaRue says. “We can’t be making policy decisions without science backing them up, and we can’t be doing research without keeping in mind the impacts on policy.”

Your Guide to Climate Action

How to level up your personal impact and make lasting change in the world. 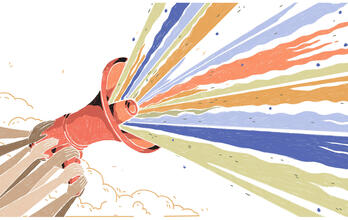