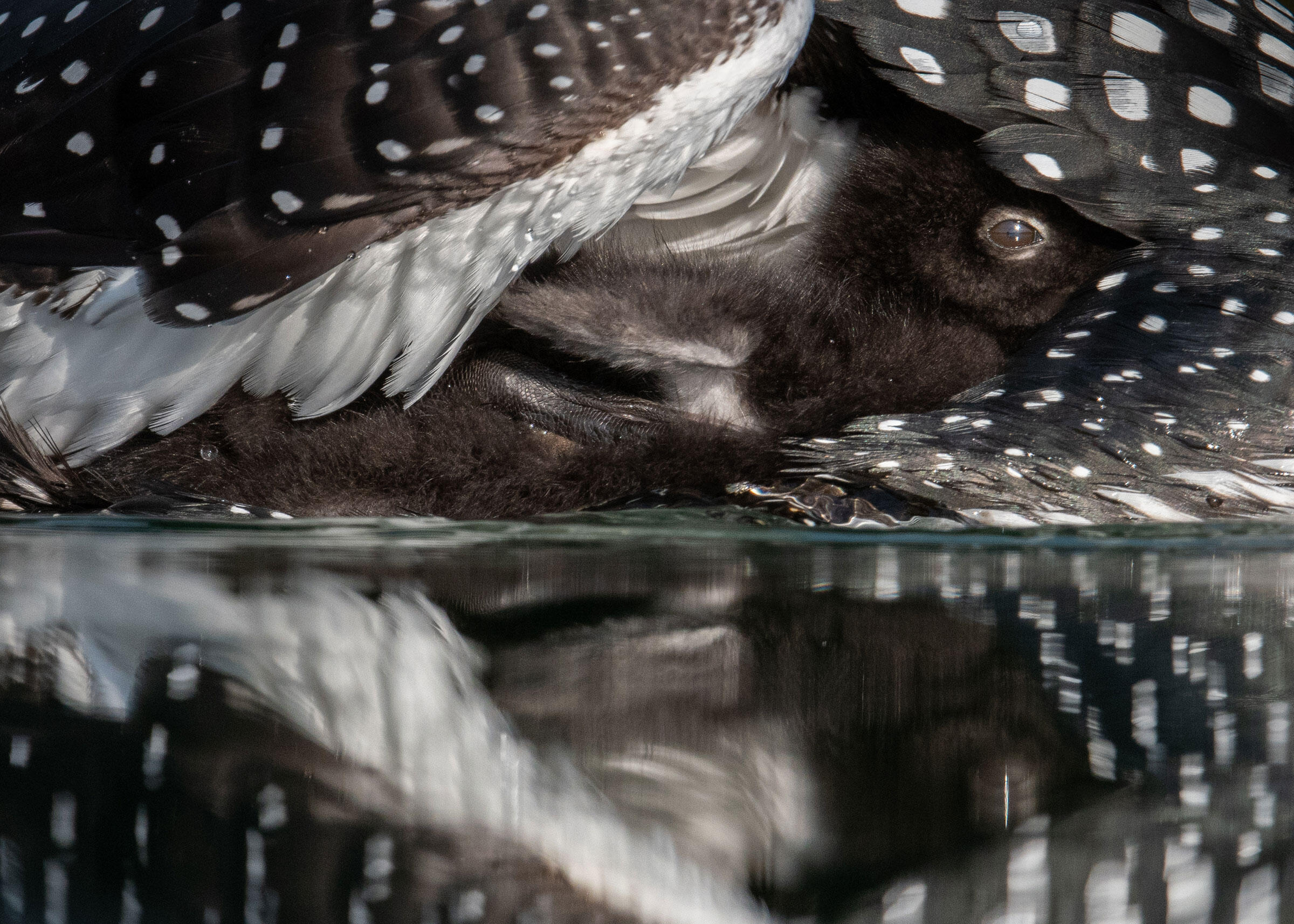 How a Photographer Snuck Under the Wing of a Loon Parent

To capture this image of a concealed loon chick, teenager Carolina Fraser focused on a split-second moment.

Winning the youth category of the 2016 Audubon Photography Awards was a defining moment in the nascent career of young photographer Carolina Fraser. Along with receiving national recognition for her talent, she earned a trip to the Audubon "Arts and Birding" camp on Hog Island, Maine. There she met her current mentor, photographer Melissa Groo, who has helped guide Fraser's path to a growing list of awards. It was also on Hog Island where she had her first encounter with Common Loons. "I remember hearing the beautiful calls of the loons that echoed in the mist," she says. "I took a few photos of one when it drifted close to shore."  Taken with the beautiful waterbirds, she hoped to photograph them again one day.

Two years passed before Fraser, now 18, finally got her chance by attending an “Ultimate Loon” photography workshop in British Columbia’s Cariboo region. The small, annual workshop provides photographers with rare opportunities to shoot the birds, which are highly sensitive to pollution, development, and motor boats (this is one reason the workshop doesn't reveal its location). In fact, the species tends to be a great indicator of water quality precisely because the birds breed on pristine, crystal-clear lakes of Canada and the northern United States. With just a few other boats on the water and a scattering of rural cabins nearby, the photographers and the loons, including their fluffy chicks, shared the calm waters. From her view on the boat's deck, Fraser could see straight through to the bottom of the lake, where aquatic insect larvae were abundant.

Loon chicks are born with their eyes open and covered in buoyant down. They ditch their nest for the water within a couple of days but depend on their parents to grow and learn for the next two-and-a-half months. Chicks often climb onto their parents’ backs or tuck under their wings for warmth and protection. In their small boats, staying far away from the birds during this critical time in their lives, the photographers observed these behaviors as the loons busily raised their young.

That's when Fraser began envisioning a perspective-bending shot. “The first few times I'd seen the loon inside the parent’s wing, I had an idea I wanted to get a unique up-close photo of the chick enclosed,” she says.

She knew she'd have to be observant and quick. A slight bump in the parents’ feathers was her only clue that a chick was hiding underneath. But like people, birds stretch, giving Fraser a critical opportunity. Bracing herself against the side of the boat, resting her lens on the gunwale, she patiently waited for her moment. Just as one adult loon lifted its wing to reveal a chick, Fraser snapped a few quick photos, thankful she’d brought the long lens she needed to reach the chick’s inner world. Later, she slightly cropped the image to completely immerse the viewer.

Fraser, who began taking photos with a family point-and-shoot camera when she was 10, says she enjoyed the challenge of using her zoom to get extra close for this shot. She also plans to continue exploring creative ways to frame and crop her images. Whether she wants to pursue a professional career, she doesn't know yet. At the moment, photography helps get her outside and brings much-needed stress relief after a busy day of school. For now, that's enough.