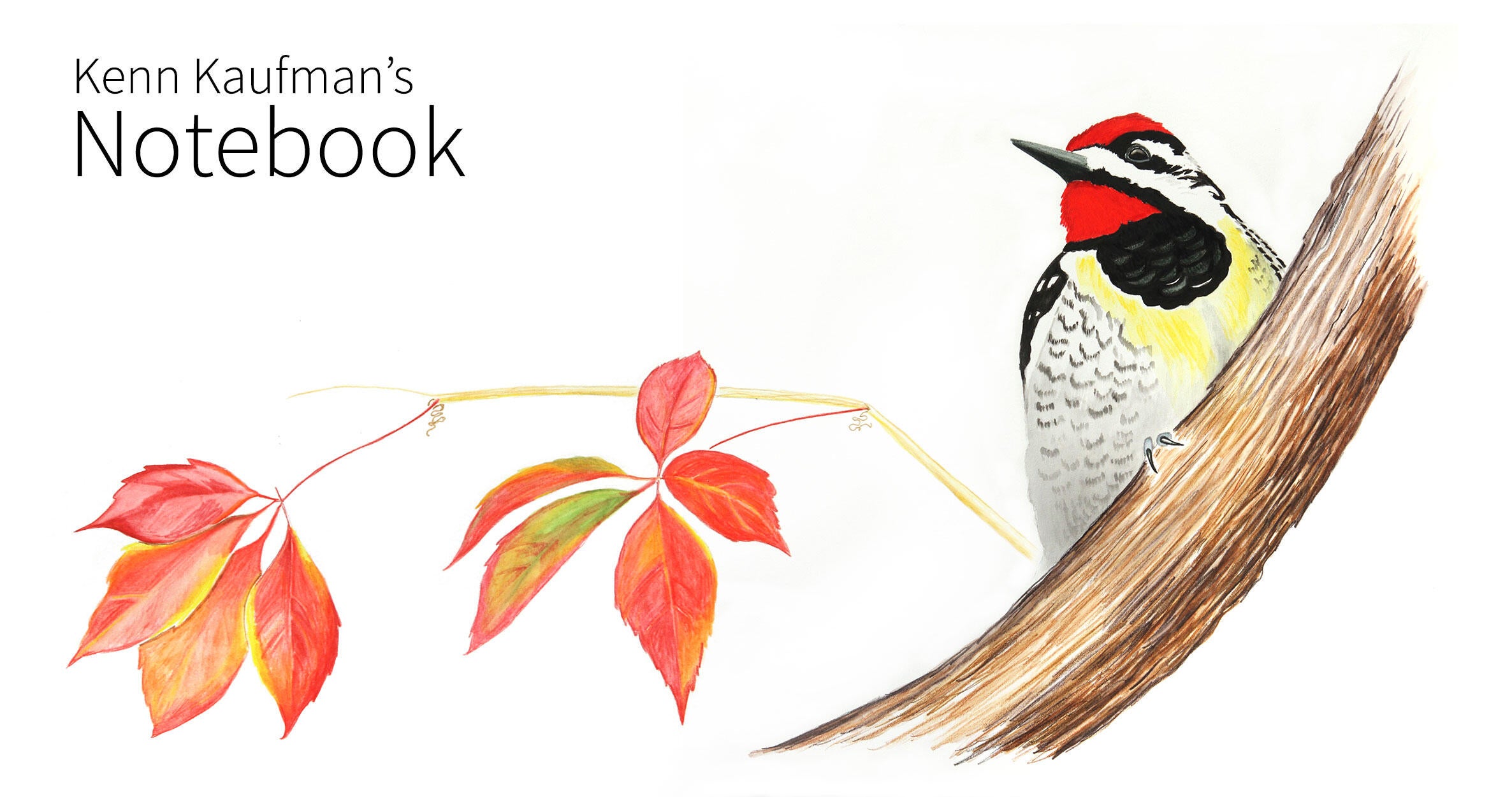 It was the craziest bird I’d ever seen, and I thought that even before I knew its name.

It didn’t really look crazy; it had the shape of a normal woodpecker, with a different color pattern than the Downy, Red-bellied, or other woodpeckers I’d seen before. But its actions were strange. It was clinging to a tree trunk just a few feet above the ground, wings held out loosely, turning its head at odd angles. As I approached for a closer look, it lurched to one side and then fell to the ground. Down in the grass, it jerked around, looking dazed. Finally it pulled itself upright, sat for a few minutes, and flew off low with wobbly, uneven wingbeats.

I was an avid 14-year-old birder, and I was away from home, visiting distant relatives in Arkansas that April day. Of course, I’d brought some of my bird books along. It took just a few minutes to confirm that this weird bird was my first Yellow-bellied Sapsucker.

The name fit. Yellow on the belly—check. Sucking sap—yep. According to the books, this unconventional member of the woodpecker family made a habit of digging little pits, or sap wells, in the bark of trees and then coming back later to lick up what oozed out. It also ate insects like other woodpeckers, and sometimes feasted on wild fruits and berries. But much of the time, it was filling its (yellow) belly with sap.

So “Yellow-bellied Sapsucker” was a legitimate name, even if it sounded like a cartoon bird. But my books didn’t say anything about the odd behavior I’d seen.

In later years, I saw this species many more times. It was never abundant. Even during peak migration seasons, I rarely saw more than a handful in a day. But it was widespread, and it was more of a long-distance migrant than other woodpeckers in North America. Nesting all across Canada east of the Rockies and south into the northernmost states, the sapsucker would fly south in fall to the southern U.S., Mexico, and Central America. It was a shock to see this bird in winter near Mayan ruins in Honduras, in groves that also harbored toucans and parrots.

For a while I studied details of plumage every time I saw a Yellow-bellied Sapsucker, because I was writing an advanced ID chapter comparing this species to the Red-naped Sapsucker of the mountain west. It was fascinating to see the amount of individual variation in their markings. And just a few years ago, one striking variant led me to look at sapsuckers in a whole new way.

I was birding at the famed migration stopover site of Magee Marsh, Ohio, on a cold spring morning when I found a female sapsucker with no red on the head—a variant that I’d seen only a couple of times before. As I watched, I noticed that she was taking sap from a series of sap wells on a thick, ropy, wild grapevine twined around a tree trunk. After about five minutes the bird flew away in a low, swooping flight through the woods. I followed the boardwalk in the direction she had gone, and found her again. She was feeding on another thick grapevine.

That intrigued me. The woods at Magee have a good variety of trees: boxelder, black walnut, hickory, cottonwood, and many more, plus many shrubs and vines. Was it just coincidence that this bird chose two grapevines in a row? After she flew a second time I couldn’t find her again. But as I continued around the loop of the boardwalk, I found two more sapsuckers, a normally-colored female and a male. Both were tending sap wells on grapevines.

Up to that day, I’d never thought of sapsuckers as experts on plant life, but as soon as I began to consider it, the idea seemed obvious. With their specialized diet, they could waste a lot of effort if they went around digging wells on random trees and vines where the sap might or might not be flowing. Indeed, a few studies have suggested that there’s nothing random about the sapsuckers’ feeding behavior.

They have been documented taking sap from at least a thousand species of plants. They’ll seek out the trees producing sap with the highest sugar content. Sometimes they’ll dig very shallow square pits in the outer layer of bark, and at other times, they drill deeper holes through the outer bark to the xylem layer. Whether through instinct or trial-and-error, their knowledge of botany leads them to the best sap sources.

On that morning at Magee Marsh, apparently, wild grapevine offered the sap du jour, and all the sapsuckers had figured that out. Ever since that day, I’ve enjoyed thinking of these birds as little feathered botanists, traveling from the boreal forest to the tropics and back, looking at all the trees and vines with a secret knowledge that we can never match.

And what about the antics of my long-ago first sapsucker? I’ve never seen that behavior again, so I can’t give a definite explanation. But it was a hot afternoon, as I recall, following a series of unseasonably warm days. My best guess is that some of the oozing sap had fermented in the sun, and the bird was slightly drunk. Such a thing has been reported before. Even the best botanists can make mistakes sometimes.