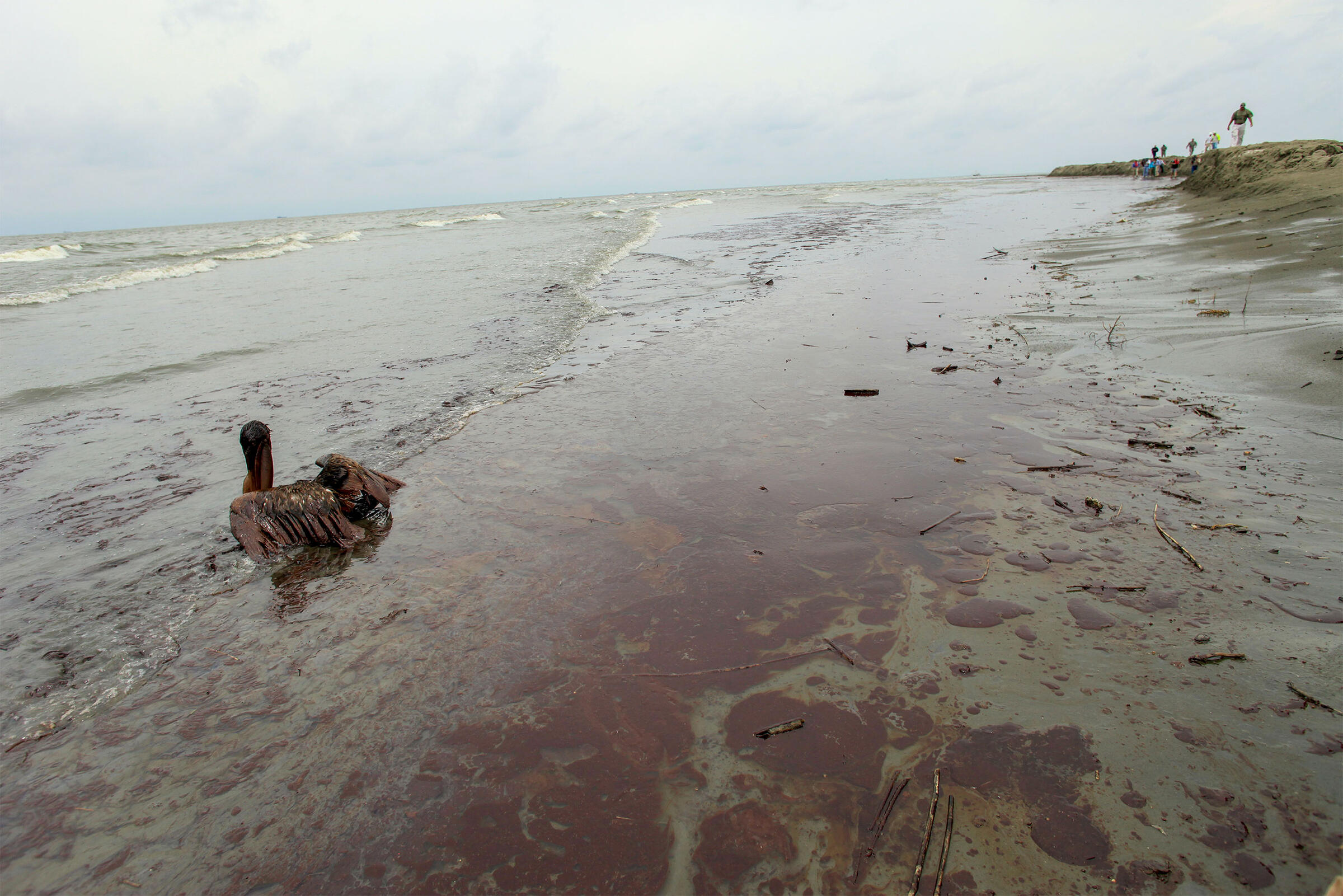 Inside the Growing Movement to Make Ecocide an International Crime

Lawyers will take a major step this month toward putting environmental destruction on the same level as war crimes and genocide.

Over roughly a decade starting in the early 1960s, the United States military sprayed an estimated 19 million gallons of herbicides, including the notorious Agent Orange, in Vietnam, Laos, and Cambodia. The resulting devastation to the environment was so severe that scientists and activists began to use a new word to describe it: ecocide.

More recently the term has gained popularity as a way to describe the most egregious cases of environmental destruction. And now a movement to establish ecocide as an official international crime is also building global momentum. Already the European Parliament and political leaders in numerous countries, including France, Belgium, Finland, Spain and Canada, have expressed varying levels of support for the idea.

Advocates hope for the new crime to be recognized by the International Criminal Court, the Netherlands-based body that was founded in 2002 to prosecute the world’s most serious offenses, such as genocide and war crimes. The effort will reach a key milestone later this month: After years of preparation, an international panel of lawyers will release a first legal definition of ecocide, which ICC member states could use to amend the court’s governing statute to include ecocide as a crime.

If the crime is added to the statute and ratified, prosecutors could bring criminal charges against individuals—such as corporate CEOs or heads of state—for committing ecocide in the territories of ICC member states. Those countries could also bring their own ecocide charges once they have ratified the ICC amendment. Actual legal enforcement remains far off, but once the crime is added to the ICC statute and ratified, supporters argue, it will immediately carry a moral force, and begin to recalibrate the way big polluters operate.

To learn more about this important moment for the growing movement, Audubon recently caught up with Jojo Mehta, a cofounder of Stop Ecocide, the organization leading the effort, who spoke from her home in England.

Audubon: You co-founded the Stop Ecocide movement in 2017. I'm wondering, as an environmentalist, why did you decide to focus on this movement in particular?

Mehta: It struck me as kind of the biggest game in town. You know, if we could just go to the source of where all the damage is happening and say, you’re not allowed to do this anymore, that would be the most powerful thing to do.

I came to it through environmental campaigning around fracking. It was through that that I met Polly [environmental lawyer and Stop Ecocide co-founder Polly Higgins, who died in 2019] and we ended up working very closely together.

A: What are some of the biggest environmental atrocities going on now that could potentially be crimes of ecocide?

M: We aim, obviously, to deal with the biggest, worst examples that could be a harm to the environment. Some examples that you might easily know of: the situation in the Niger Delta, for example, where pollution has been going on to an extreme level for decades. But also oil spills, like Deepwater Horizon. Potentially serious deforestation. We’re aiming to criminalize this at the international level, so we can’t be talking about chopping the trees down on your village green. It’s got to be something that's widespread and severe.

A: So, it sounds like the biggest environmental issues facing the planet are what you're going after.

M: Yeah, basically. [Laughs] I mean, at the moment, there’s plenty of environmental laws, mostly in the regulatory sphere, but they’re not particularly well-enforced. And of course corporations simply try to work around them and, indeed, often pay expensive lawyers to work out how to do that, and budget for any court cases that are likely to come up.

If you move something into the criminal law arena, you're actually changing that equation a bit, because you're providing personal criminal responsibility, which means that potentially key decision makers will have their own personal freedom on the line. And that is a very different level of deterrence. Being labeled as an international criminal really doesn't help your business profile, your share price, your investment or insurance opportunities. So there’s a way in which ecocide as a serious crime actually has a really potentially powerful deterrent effect that maybe even other crimes don’t have.

A: You’ve said that criminalizing ecocide is also about leveling the corporate playing field—I think one quote from you was that right now the economic system favors companies that are “the cheapest and dirtiest.” How transformative could ecocide laws be in terms of recalibrating capitalism or the global economy?

M: We actually see it as potentially a real game-changer. It’s not like we think the entire world is going to be put to right by this one law, but at the same time it kind of feels like a necessary, but not sufficient, element. You have to have some kind of hard stop. We see it as a safety rail, in terms of corporate practice, so that you have a line that says, this far and no further.

I mean, we all know that you can't go to a government and get a permit to kill a whole bunch of people for your new business, right? Because part of the criminal law and also the whole moral landscape is you cannot kill people. We don't have that attitude toward serious harm to nature. But we need to, because we are completely dependent and interdependent with the ecosystems that create our food, our air—you know, everything.

A: What’s the best way to convince people or corporations that might not be sympathetic to the premise of equating destroying ecosystems to destroying people?

M: That’s an interesting question, because actually we have an associate group in Sweden that just launched a website called ecocidelawalliance.org, which is all about getting business leaders behind it. What they’re finding is that the majority of corporate leaders that they’re speaking to are actually quite amenable. There are a few obvious oppositional sectors, like the oil and gas industry, but generally speaking there’s really quite a strong awareness among corporate leaders of the situation we find ourselves in globally. What they want are the guidelines that will enable them to move in the right direction without disadvantaging them.

A: The concept of ecocide is not new. Why do you think there’s been this momentum lately? Has something shifted?

M: Very much so. Very much so. I would say it’s a combination of things. Some global reports that have come out in the last three years, like the IPCC report, which is a wake-up call for a lot of people. But we would also say that the climate mobilizations at the grassroots level has made a really big difference—so Greta Thunberg with the school strikes, the Extinction Rebellion and so on.

It’s really just in the context of the last couple of years, with the opening up of that conversation, that [outlawing ecocide] is becoming more of a kind of obvious possibility, and landing in a receptive way that simply wasn't the case before, where it may have been considered sort of too extreme. There was also a very human and rather tragic aspect, which is that we tend not to take things seriously until we see them happening.

A: The draft legal definition of ecocide should be coming out later this month. What does it mean to finally have some kind of legal framework around this effort?

It’s been an interesting journey with the lawyers because there’s all sorts of issues to discuss: How will it interact with existing law? How do you address climate? Different kinds of things. But what I think they’re ultimately aiming for is the definition to hit a kind of sweet spot, if you like, where the crime is described as serious enough to warrant, effectively, state representatives looking at and saying, yes, that should be an international crime. And at the same time, not high enough that you can’t prosecute anybody. Actually [prosecuting] genocide has proved difficult in that way, because the intentionality requirement is so high.

A: In terms of a practical impact, what do you see happening just from having a legal draft published?

M: I certainly see an increase in the political conversation, and also particularly the behind-the-scenes, sort of diplomatic conversations. But also I think what we’ll see is the beginnings of a shift in the corporate world. And particularly, I think insurers are going to be looking at this very carefully. We already know from conversations some years ago that insurers fully expect something like this to come into effect at some point. I mean, they said to us way back, this is not a question of if, this is a question of when. So we very much see our job as kind of accelerating that moment.

A: How will you gauge reaction to the draft? Are there specific things you’re looking for to know if it is a success?

M: The obvious one is a growth in the number of states that are willing to talk about this at the level of the International Criminal Court. That is the very specific direction that we want this to progress in. A state needs to propose it, there needs to be a majority in favor of talking about it, ultimately you need at least two-thirds of members to agree for it to be adopted into the statute.

But what’s going to move that forward is how seriously it is taken in the political sphere and in the media. And of course, by the public, because ultimately all the biggest changes, the key things like independence for India, the Civil Rights movement, all of these things have involved public pressure coupled with legal change.

A: Do you think this could take over the public consciousness in the same way that other social movements have?

M: You know, I really do. I really do. This is growing fast, almost faster than we can keep up with at the moment. And I think that there is this kind of realization—on one level, it is such a no-brainer, in the sense that if we want to continue coexisting on this planet, and with the ecosystems that are here, we simply have to stop the mass destruction of them. I mean I’ve yet to speak to somebody one-to-one that doesn’t agree with what we’re doing. Even at a corporate level, they’re having to take certain positions, for example. I do think that this really is the next big thing. There isn’t really a bigger game in town, as far as we can see.

A: The survival of the planet is on the line, after all.

M: Exactly, exactly. Which obviously means survival of us. We certainly can’t carry on on the trajectory that we’re on right now. We obviously realize that all ecocide is unlikely to stop overnight. But if we make it unacceptable, and we make it morally reprehensible—which is what criminal law can do—then we actually have a chance of shifting the global direction.