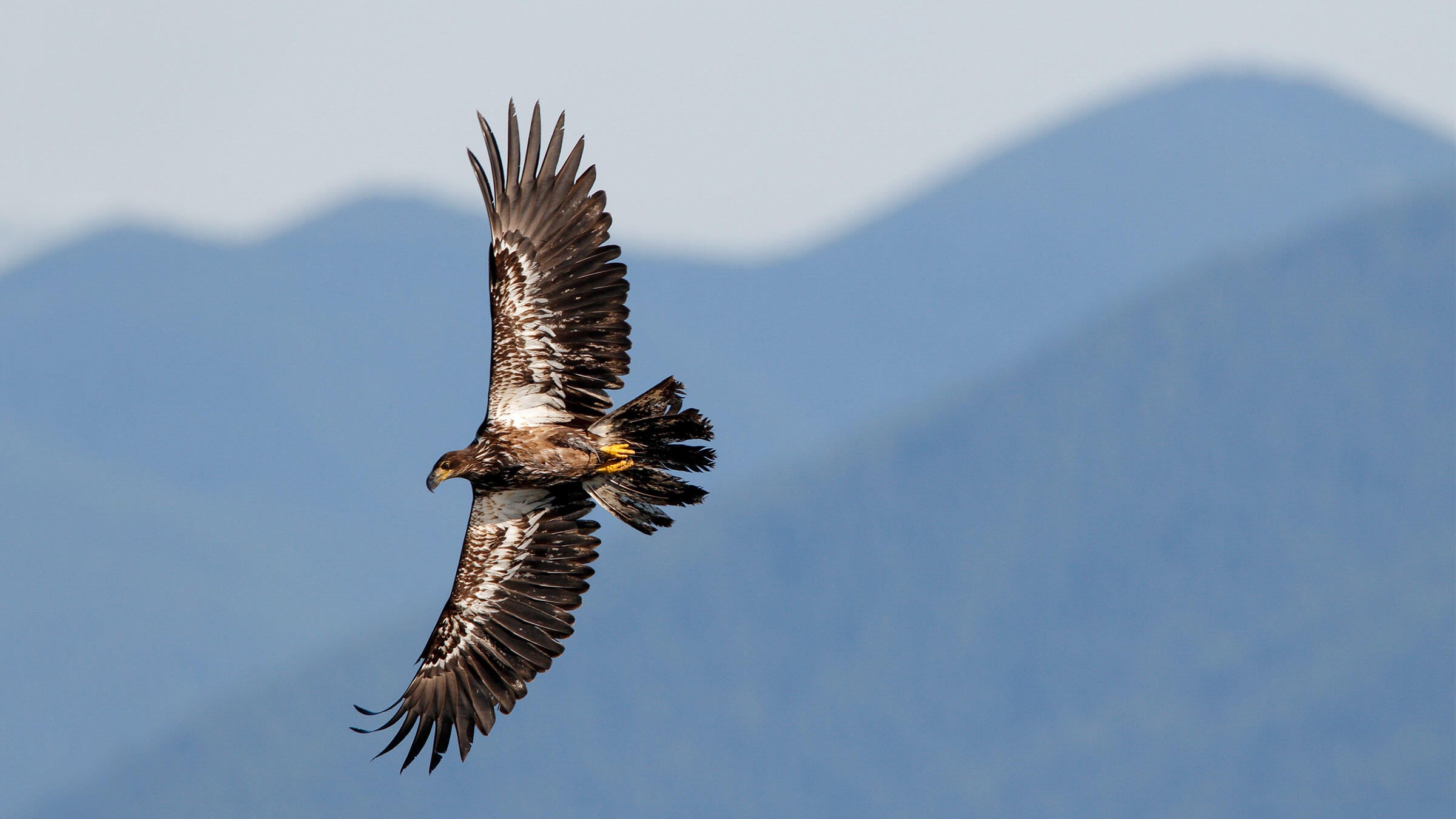 This big, brown raptor is easily misidentified as a Golden Eagle. In fact, it's a juvenile Bald Eagle. Photo: Nathan Rolls/Audubon Photography Awards

Is That Golden Eagle Actually a Bald Eagle?

In its youth, our national symbol sports brown feathers on its head—making it easily confused with its rarer, golden cousin.

If you’re east of North America's prairies and see a magnificent brown raptor cruising the skies, your heart might sing, hoping that it's a Golden Eagle. But resist the temptation to identify it as the rarer species: It’s likely a young Bald Eagle.

Many easterners I know seem driven to turn Bald Eagles into Goldens, and I can understand why. Fact is, Bald Eagles and Golden Eagles have a lot in common. They are about the same size: Males in both species are about 2.5 feet, head to toe, with a wingspan of six to seven feet and a weight upwards of 10 pounds. (Like many raptors, the females are larger.) And while both birds may appear to have black bodies, they are, in reality and in better light, dark brown.

You’re probably thinking, “Hey, Bald Eagles have a white head. Easy.” It’s a good ID point for adults: Golden Eagles, in contrast, have a brown head with a gilded nape.

Young birds, however, muddy the water.

Juvenile Bald Eagles' heads are all dark and easily confused with the fully brown head of a Golden Eagle. This, I suspect, is the source of many misidentifications—combined with wishful thinking.

After their first year, the bodies of immature Bald Eagles start filling in with whitish feathers, particularly on the belly. This makes the birds appear piebald, mocha, or even cream-colored at a distance. In contrast, Golden Eagles' bodies remain dark as they age, with white touches limited mostly to the wings (concentrated on the underwings and the base of the tail). Immature Bald Eagles have white mottling on the underwings and on the tail as well, but it’s a dirtier shade and doesn’t gleam like the Goldens’ in flight.

Three- and four-year-old Bald Eagles bear a whitish visage and a dark line through the eye, similar to the face of an Osprey. If you’re close enough to see this, you will also be close enough to note the very large bill (about one third of the Bald Eagle’s head). Golden Eagle beaks, while large, are more proportional, making the bird’s overall head profile appear shorter, more like a buteo hawk’s. (Really, Golden Eagles are just big, grand buteos.)

If the birds are standing up, you may also note that the legs of the Golden Eagle are feathered to the foot; the Bald Eagle has unfeathered, yellow ankles.

If you can't get a good look at the raptor soaring overhead, you may be able to swing your ID based on location and habitat. In North America, Golden Eagles breed in the Rockies, Western Prairies, and Arctic and Subarctic Canada. (They almost never breed in the Midwest.) They frequent forested and grassland landscapes, often away from lakes, rivers, and coastlines. Meanwhile, the more widespread and increasingly common Bald Eagle is mostly found near open, fish-filled waters.

And then there's seasonality. It’s only during fall migration that Golden Eagles are seen with any frequency across the East. From October through December, migrating Goldens are recorded at well-known tally points such as Hawk Mountain in Pennsylvania and Cape May in New Jersey. In winter, both eagles may concentrate where waterfowl numbers are high. For Bald Eagles, this means Atlantic coastal marshes and rivers kept running by swift currents, hydroelectric dams, or natural waterfalls. A small population of Golden Eagles also winters in the southern Appalachians where deer appear to be a favored prey.

Also of note: Each of these species is fond of carrion, so don’t presume that a large brown eagle foraging on a deer is a Golden. In fact, the raptor probably didn’t kill the deer: It found a meal and is being opportunistic. That’s yet another trait these big, beautiful birds share. 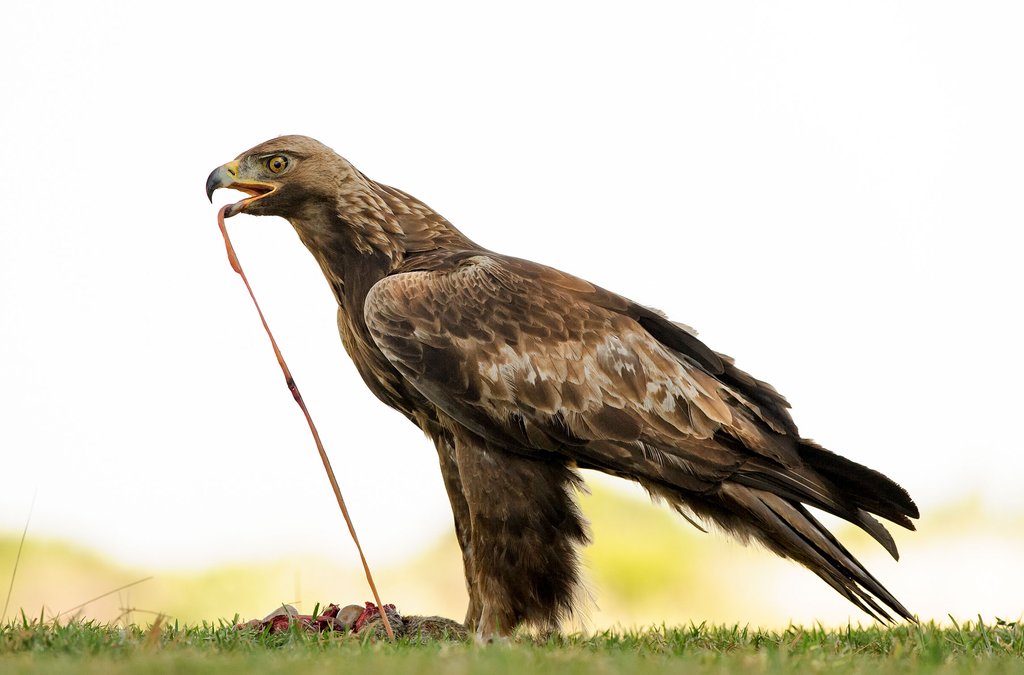 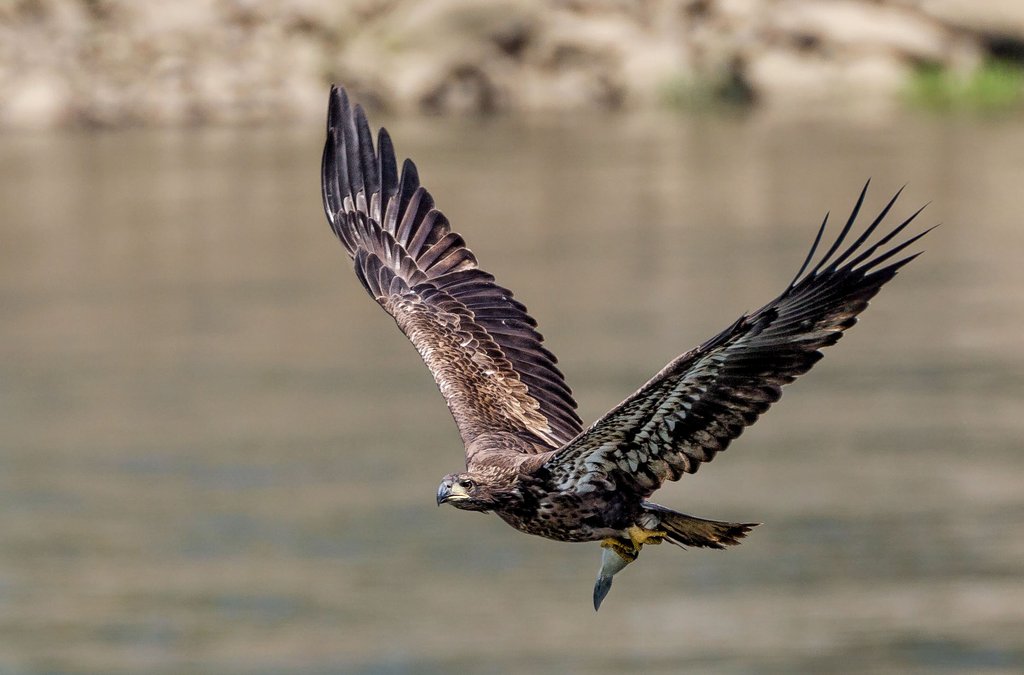