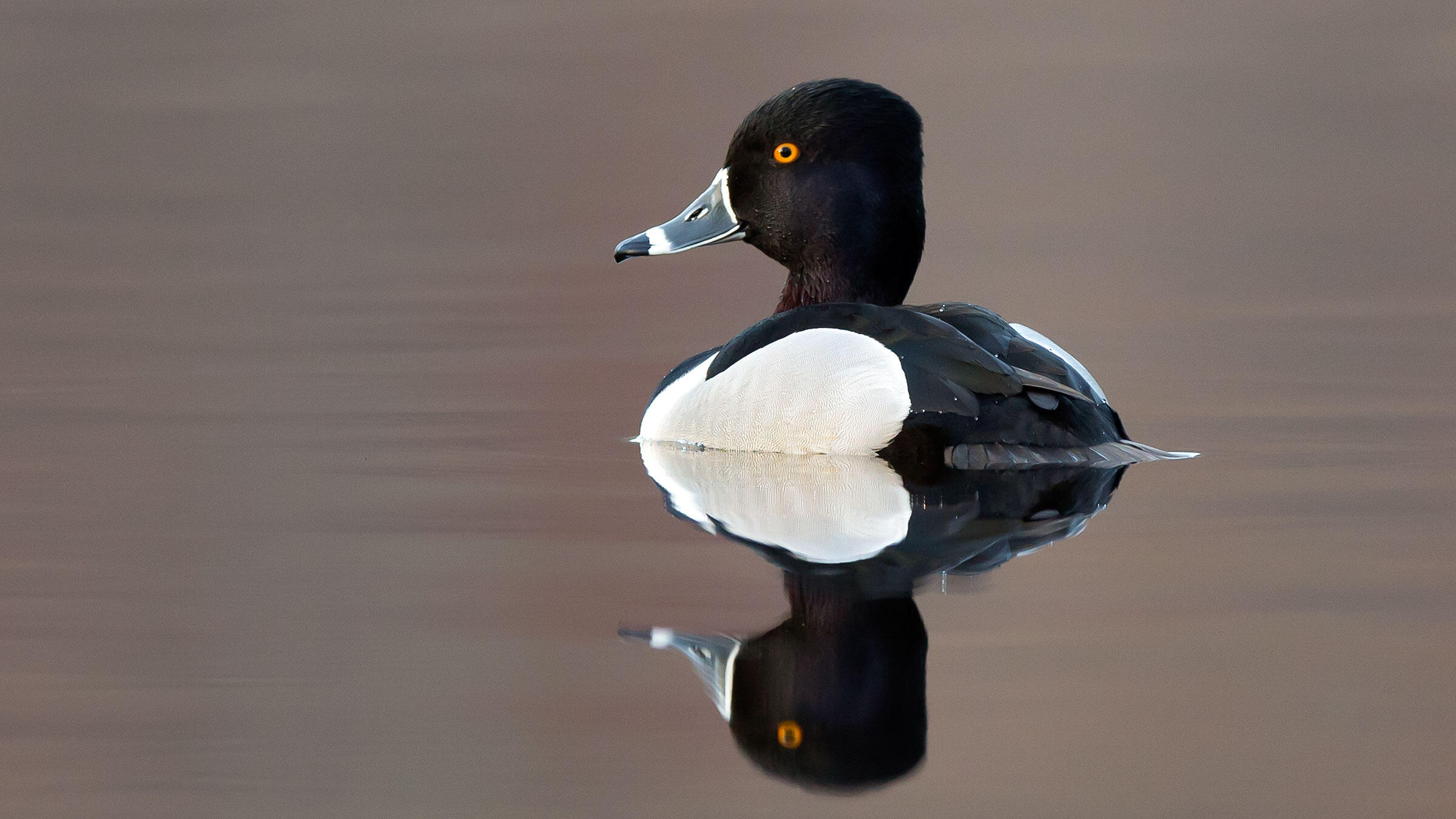 A Ring-necked Duck showing off its unmistakable ringed bill, the field mark for which the bird could be renamed. Photo: Rob Sabatini/Audubon Photography Awards

It's Time to Rename the Ring-necked Duck

One birder's impassioned plea to name the diver for a much more obvious—and useful—field mark.

Thag Simmons did not die in vain.

Technically, he didn’t die at all. He never existed. But back in 1982, Thag gave his non-existent life to provide us with a reminder: names matter.

Those of you familiar with Gary Larson’s classic cartoon The Far Side may remember the panel in which he depicted a room full of cavemen, one of whom stood beside a drawing of a stegosaurus, pointing at the tail spikes and announcing, “Now this end is called the thagomizer . . . after the late Thag Simmons.”

As Cornell ornithologist Kevin McGowan once put it, “If we don’t know the name of it, it’s invisible.” The distinctive array of spikes at the end of the stegosaurus’s tail was certainly visible to any observer, but until 1982, it was nameless, and if not for poor Thag Simmons, it would likely have remained so. While the term thagomizer was intended to produce laughter, paleontologists quickly realized that Larson had produced something of practical value. For nearly 35 years, they have been able to refer to the business end of a stegosaurus’s tail as its thagomizer with reasonable certainty that the audience will understand what they’re describing. Before that, they lacked any such term; thagomizer was a tool adopted out of necessity.

But recognizing this necessity comes with a corollary: that the test of a name’s value, like that of any tool, is its usefulness. A name that doesn’t fit the subject, or that creates confusion about the topic under discussion, is a name to be altered. And as an English teacher and birder, I would like to nominate a name for alteration.

Like most birders, I have on occasion felt frustrated with a bird’s nomenclature. Why oh why did the American Ornithologists’ Union pick that name? I will moan silently, desperately trying to remember whether I’m looking at a Nashville or Tennessee Warbler, or whether my life list contains the Black-throated or the Black-chinned Sparrow. (Black-throated. I looked it up.) And for that reason, I make the following plea to the AOU:

Can we please get rid of the Ring-necked Duck?

Not the bird, of course. Known scientifically as Aythya collaris, it is a perfectly lovely little diving duck, but its English name is all but useless. The term “ring-necked” suggests, obviously, that you will see a ring around the bird’s neck, such as the white ring on a Mallard drake or a male Ring-necked Pheasant. But most observers will see no such thing. As with many birds, the duck's name was first made at a time when birds were described up close in the hand. Yet for someone making an ID from across a pond, all they’ll observe is the female’s grey-brown plumage and dark back, or the male’s glossy black head, black chest, black back, and pale sides.

What they won’t see is a neck ring—unless they peer intently, in just the right light, at the drake, which will reveal in such circumstances that it has a narrow band of cinnamon-brown feathers between its head and chest. As field marks go, it’s atrocious—almost never applicable in the field. If you go to Audubon.org’s field guide entry for the bird, only one of the five photos shows it. And I can attest that it’s not even very useful away from the field; the Cornell Lab of Ornithology’s collection contains a Ring-necked Duck specimen, but even when it was laid out flat on a table in front of me, I was barely able to distinguish the ring.

Why then is this all-but-invisible mark—one present only on the male bird, I note—still the distinction that earns the bird its name? A name is a tool, and when it becomes difficult to use that tool, I feel that some kind of adjustment is in order.

Luckily, there is a clear and obvious field mark on both the drake and the hen: a white band circling the blue-gray bill, one so easily discerned that hunters have already adopted the nickname “Ringbill” for the bird. Indeed, if you type “Ringbill” into the search engine at Wikipedia, you will be redirected to the entry on the Ring-necked Duck.

In short, authorities of the AOU, I believe we have a reasonable solution to the problem: By officially redubbing Aytha collaris the Ring-billed Duck, you can end a subtle example of sex discrimination, give an imprimatur to an already widespread name, and keep frustrated birders from spending useless hours searching for the invisible. You can give us the tool we need. Thag Simmons would be proud.