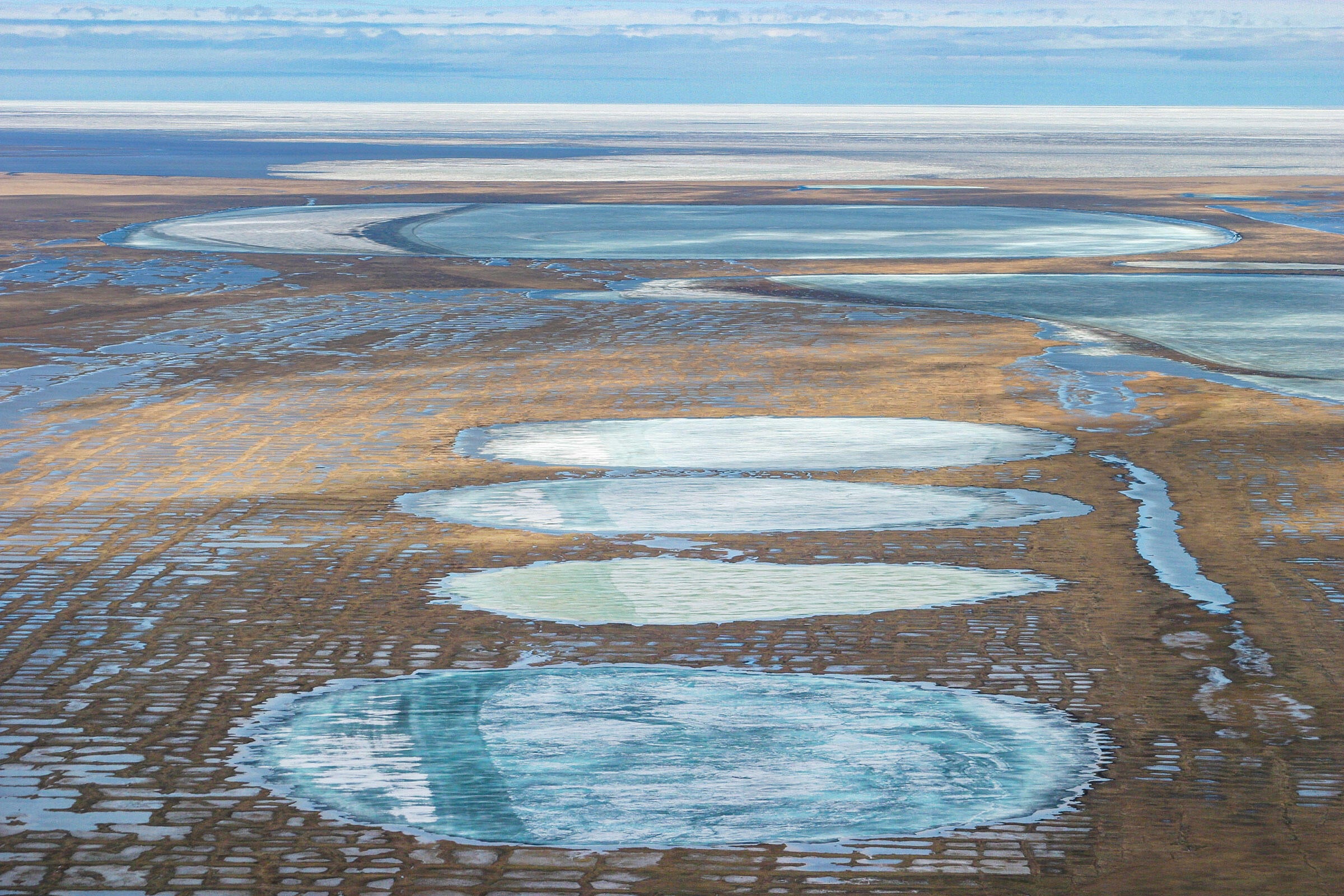 Four small lakes with remnant ice on the northwestern side of Teshekpuk Lake. In summer, when the ice thaws, birds throng the area. Photo: Craig McCaa/BLM Alaska

On a July day several years ago, I sat on the spine of a hill in the northern foothills of the Brooks Range on Alaska’s North Slope and watched 15,000 caribou stream around me, some just a few yards away. I could hear their clicking feet, their untroubled breathing, and their rough coughs so closely echoed by the guttural cries of the Rock Ptarmigan exploding from the tundra before them. They were spread out as far as I could see to the west, and among them were seven grizzly bears, each napping beside or feeding on a caribou carcass—well-fed and thus of little concern to me. The herd separated to pass the predators, then melded back together and moved on. They treated me in the same fashion. I sat there until midnight, when the sun still shone from the northern horizon, then stumbled down through the cottongrass tussocks and back to my tent.

It was a singular experience for me, one of a lucky group of people, including Alaskan Indigenous Peoples, oil-field workers, biologists, and adventurers, who have seen this wild relic of the Pleistocene in northern Alaska. The vast, 95,000-square-mile tundra—encompassing the National Petroleum Reserve-Alaska (NPR-A) to the west and the coastal plain of the Arctic National Wildlife Refuge to the east—is currently a massive, quiet ecosystem of open country. Due to its relative lack of industrial disturbance (save for Prudhoe Bay, a 333-square-mile oilfield smack between the two regions), low level of human pressure, and few overwintering predators, plus luscious crops of appetizing insects, fish, berries, seeds, and veggies, it is a perfect place for migrating birdlife from every continent in the world to nest, rest, and refuel.

But this whole region could soon be developed into one huge Arctic petroleum-extraction area, an effort led by the Trump administration that would prize drilling for gas and oil for short-term profits above all else—above the eternal loss of wilderness, and above the climate crisis that threatens us all.

In the last days of 2017, Republicans snuck a measure into a tax bill that requires the Interior Department to hold massive lease sales for oil and gas development on the Arctic Refuge's coastal plain. The department will miss its self-imposed deadline to start leasing this year, but it's aiming to begin the sell-off early in 2020. Meanwhile, Interior recently released a draft environmental impact statement for a new NPR-A management plan that could allow drilling in the most important areas for birds and other wildlife. A 2013 management plan put about half of the NPR-A off-limits to development, but the Trump administration is pushing for an expansion of drilling into the area around Teshekpuk Lake, internationally known as the most important waterfowl nesting and molting area in the Holarctic north.

These proposed developments go against reason and legal restrictions. Though the NPR-A is a petroleum reserve, Congress required any development there to first respect and provide for “surface values,” including wildlife, habitat, and native subsistence protections. The Arctic Refuge was set aside to protect wildlife first, to shelter this one area from human development. Nearby Prudhoe Bay, where oil development started in 1968, is evidence of what happens to these wild landscapes when they’re developed for oil: Extensive roads, drilling pads, wells, and spider-like pipelines are all part of the largest industrial development on the continent. The current administration appears to overlook these histories—and indeed any moral or ecological reason at all.

So what is it like to be in America’s last great wilderness? The solitude, if you like solitude, can be phenomenal.

Just west of Teshekpuk Lake in the NPR-A, near the Ikpikpuk River, lie lakes where for more than a dozen years five of us biologists studied the rare Yellow-billed Loon—a species low in number and likely to be stressed by industrial development and climate disruption. Every chance I got, I went off alone for the day, getting my private fill of Arctic magic. We’d each cover several miles, checking on lakes and ponds and known nests. Golden Eagles circled above; Red-necked Phalaropes stitched the water’s surface; Parasitic Jaegers chased Arctic Terns out of their hunting grounds. The terns dive-bombed me in turn when I ventured too close to their hidden nests.

The place was no less surreal when we were together as a group. One night, as we unpacked the tents, we watched caribou trotting past on the far hills, and then something closer that moved differently—something that looked like a skinny, long-legged bear. It was a wolverine, rarer than the Yellow-billed Loons and gilded in the midnight sun. We never reached for our cameras; we didn’t want to take our eyes off of the spectacle. 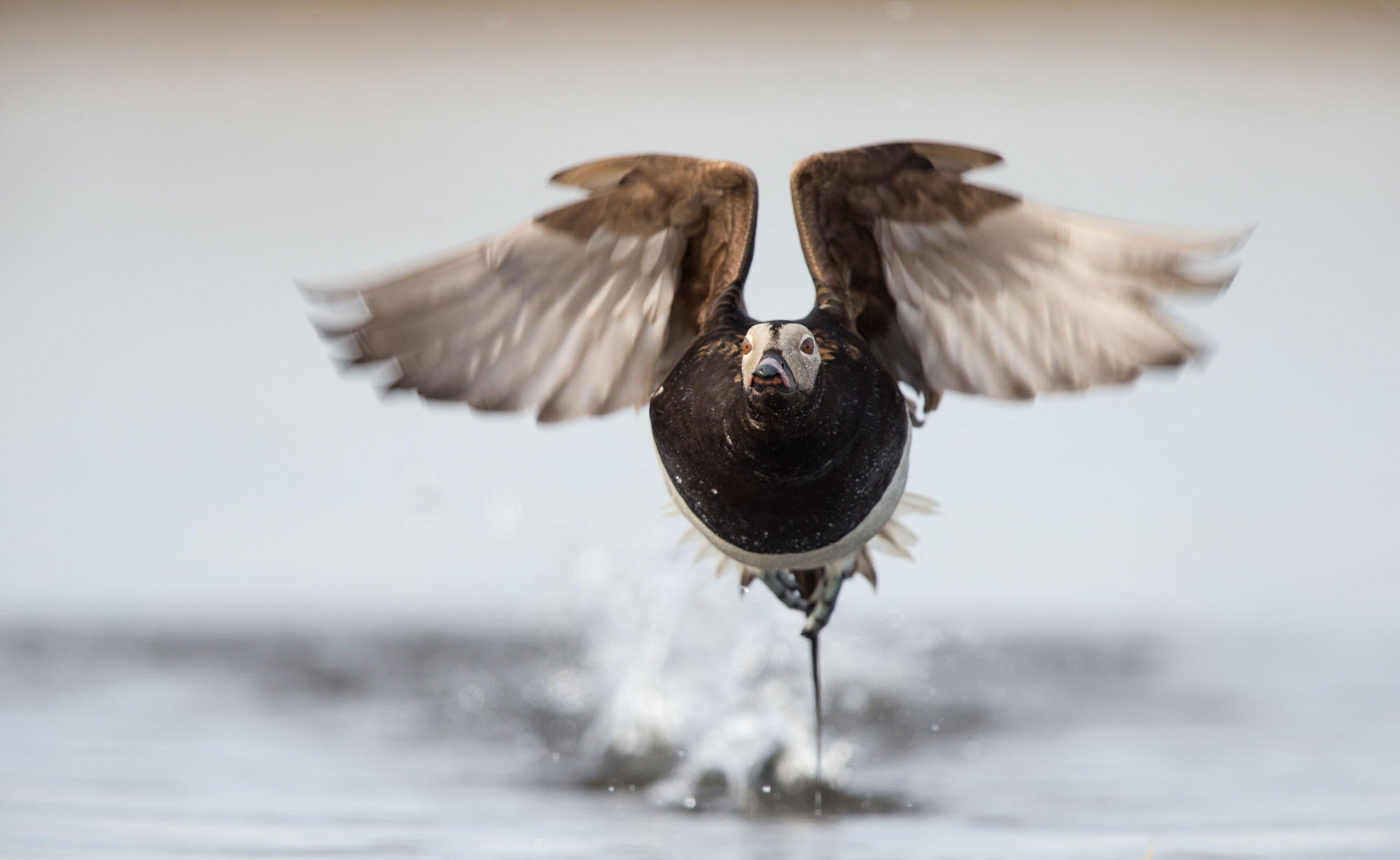 A Long-tailed Duck, one of our chattiest duck species, takes off. These ducks breed in the high Arctic, including at Teshekpuk Lake. Photo: Gail Bisson/Audubon Photography Awards

For another research project in the the Arctic Refuge, I studied the nesting success of shorebirds on the coastal plain, work that began the end of May when there were still three feet of snow across some of the study sites. There were Pacific Loons in the river and swans in the air and waterfowl in the thawed ponds. My team watched pairs of Long-tailed Ducks sharing tiny snow-walled cups of open water with chunks of ice; I called them long-tailed cocktails-on-the-rocks. When the snow melted off the tundra, the shorebirds arrived, little stick-legged organisms of several species I learned to identify. We suddenly couldn’t walk anywhere on the tundra without scaring a sandpiper or a longspur off its nest.  Or a ptarmigan or a plover. It was a veritable sponge of life. And then came the wildflowers, miles of them. Later in June, the famous Porcupine Caribou Herd would arrive to give birth on the coastal plain, their final destination after a 1,500 mile migration. The Gwich’in have been right all along: This truly is a place where life begins.

This Arctic wilderness supports ecologies and wildlife that humans have wiped from the rest of the United States, all slaughtered for trade, profit, and population growth. And yet, even this last largely untouched wilderness is now at stake if the Trump administration, advised and led by oil and gas barons, lease out the priceless Arctic Refuge and the critical wildlife areas around Teshekpuk Lake, destroying delicate and irreplaceable habitat to build oil rigs, roads, and pipelines. The government’s huge underestimation of how many acres the development will cover and directly affect could not be more mendacious.

The disruption of the tender ecologies in places like these is a betrayal of the land and the wildlife and humans it supports. Roads blocking caribou movements, helicopters moving the wildlife unnaturally, pads melting permafrost, seismic pounding that drives polar bear mothers from their dens—all of this to continue burning fossil fuels, which has poisoned our air, heated our climate, and eliminated the sea ice from the northern coast for much of the year.

The developers, including Bureau of Land Management and politicians, claim it will have no significant effects on wildlife. As a biologist, I know better. But our shared concerns go beyond protecting this special place and its wildlife, because the oil and gas extracted from beneath Alaska’s coastal plain will be combusted, producing carbon gases that will remain in our atmosphere where they’ll continue to trap heat for hundreds of years.

The administration’s position—to seek out every available drop of oil, even as the world’s scientific authorities continue to raise the alarm that we must stop burning fossil fuels—is nihilistic and suicidal. Those in favor of drilling are trying to pull this off on federal land belonging to all Americans because they believe most Americans don’t care or won’t notice. That’s what they hope.

I hope they are wrong. I hope in defiance of errant politicians and corporate greed that we Americans will keep this Arctic land and its wildlife undisturbed, healthy, and beautiful—where one can experience, as I have, being alive on the unencumbered cusp of creation.

Jeff Fair is a loon biologist and award-winning writer who has lived and worked in Alaska for 26 years, including 16 trips in the Teshekpuk Lake area and two on the coastal plain of the Arctic National Wildlife Refuge. He co-authored a 2002 Audubon Alaska report on the National Petroleum Reserve–Alaska, and his fieldwork with Yellow-billed Loons in Arctic Alaska led to the species’ current “warranted” status for ESA listing.