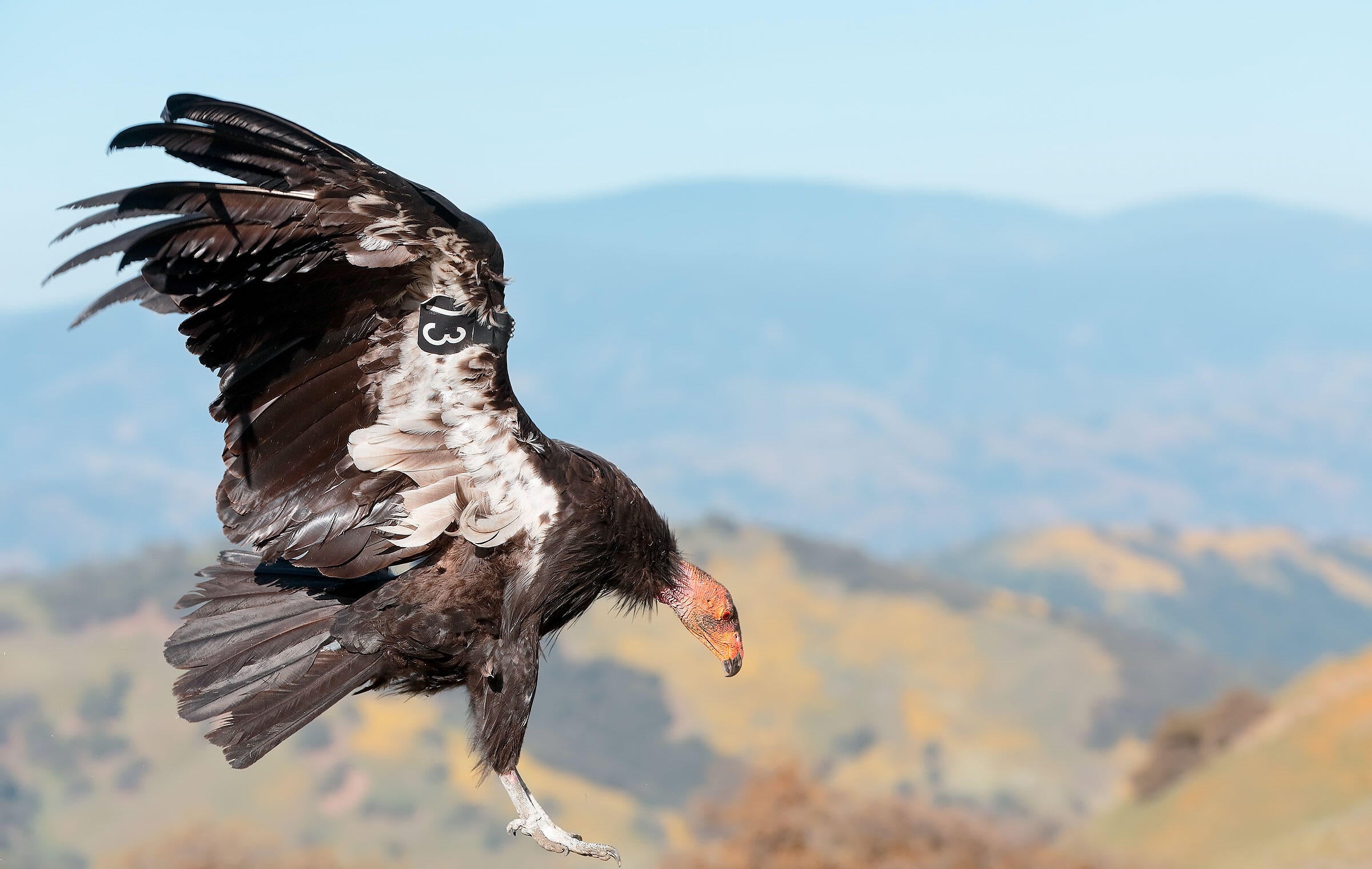 Lead Ammo, the Top Threat to Condors, Is Now Outlawed in California

Bullet fragments routinely poison California Condors. With cooperation from hunters, the ban could be a turning point for the endangered icons.

The magnificent California Condor has a nearly ten-foot wingspan—and in comparison, the number-one threat to the endangered raptor is practically microscopic. It lurks unseen in deer, elk, and other carcasses the birds scavenge. Ingesting less than a gram is enough to seriously sicken a condor; in the last 25 years, it has felled at least 76 of these giants.

That threat is lead, largely derived from ammunition. Now, as a 2013 law goes into full effect in the bird’s namesake state, that menace is in retreat. As of July 1, it is illegal to use lead ammunition to hunt any game anywhere in California.

Since the law was passed, the state has slowly phased out lead bullets, which rupture, often into hundreds of tiny pieces, when they hit a target. Then, when condors scavenge carcasses or guts left behind by hunters, they ingest these pieces, too; the toxic metal causes the birds to starve to death because they can't hold any food down. Even with condor-hunting banned, continuing to hunt with toxic bullets has severely hampered the recovery of this endangered species across its range.

California is the first state to outlaw the use of lead in all hunting, a decision driven largely by its harm to the California Condor and other birds of prey. (Lead fishing tackle and weights, which pose a threat to birds like pelicans and loons, are being considered separately in the state.) Some conservationists worry the rule will be difficult to enforce and some hunters will not make the switch over to non-lead ammo, despite steep fines for anyone caught using lead bullets. Meanwhile, advocates of this legislation see it as a necessary step to ensure the recovery of condor populations.

“We’re really excited for it because it is really the culmination of well over 10 years of work to try to reduce lead exposure for birds and other wildlife,” says Mike Lynes, policy director for Audubon California. “This should have benefits for wildlife in this state for decades to come.”

The California Condor is one of the rarest birds in the world. Lead poisoning, among other threats like habitat loss and historical hunting, led the federal government to list the species as endangered in 1967. But it wasn't soon enough; populations continued to decline.

Two decades later, just 22 of these giant scavengers remained worldwide, so in 1987 conservation groups and government agencies captured the remaining birds to breed them in captivity. Five years later, after successfully growing the captive population, the U.S. Fish and Wildlife Service started reintroducing condors into the wild, and the total population now tops 460 birds, most of them flying free. But wild condors continue to struggle. Each year, blood testing finds that about 20 percent of wild condors have dangerously high lead levels. Ammunition is the main source of lead poisoning in raptors.

Gut piles left behind by hunters after they dress wild game are frequent food sources for condors and other birds of prey, which turn to carrion in winter months when fresh kills are scarce. These organs and tissues are often riddled with bits of fragmented bullets. The super-acidic digestive tracts of scavengers help them digest dead things, and also cause condors and other raptors to quickly absorb lead into their bloodstream, making it potentially more deadly to these birds than to other animals, says Todd Katzner, a biologist with the U.S. Geological Survey. This year, a Golden Eagle reportedly died of lead poisoning near Yellowstone National Park, as did a Bald Eagle outside Glacier National Park and a Red-tailed Hawk around Zion National Park.

To prevent such needless deaths, in 2007 California passed a bill prohibiting the use of lead ammunition for hunting big game and coyotes in the condor’s home range in the southern part of the state. However, research showed that because condors roam widely in California and beyond, limiting the ammo for certain types of hunting in certain areas of the state was not enough. Audubon California, Defenders of Wildlife, and the Humane Society worked together to expand the ban to cover all hunting across the entire state, a move opposed and still being challenged by the National Rifle Association. (The NRA did not respond to Audubon  magazine's multiple requests for comment for this story.) Mounting evidence that lead could hurt other birds—and, more urgently, hunters’ families—pushed the ban through.

Some California hunters switched readily to alternative ammo, like copper bullets, because it’s better for the environment and their families, says Peter Tira, a public information officer in the California Department of Fish and Wildlife. Others see this rule as yet another burdensome regulation in a state with some of the strictest firearm laws in the country. “It’s a very mixed reaction,” he says.

Copper is the alternative metal of choice for many non-lead ammunitions. Copper bullets retain weight, go deep, are accurate—and don’t splinter. Copper ammunition is often comparable to lead ammunition in price, says Leland Brown, the non-lead hunting education coordinator at the Oregon Zoo and a hunter himself.

California Department of Fish and Wildlife published a guide to non-lead ammunition options.

“Performance-wise, personally I probably will never use a lead bullet again. I think copper bullets perform as well or better,” says Brown.

Nationwide, hunters are prohibited from using lead shot in waterfowl hunting, thanks to a federal rule enacted in 1991. Thirty-four states, such as Colorado, Delaware, and Wisconsin, have expanded on that law in subsequent years, but none have gone as far as California with a full ban.

Recent attempts to expand lead ammunition regulation at the federal level have stalled out or been reversed. For example, on its last full day in office, the Obama administration ordered a ban on lead ammunition and fishing tackle in national wildlife refuges. Weeks later, on his first day in the Trump administration, former Interior Secretary Ryan Zinke overturned it.

Even among conservationists and others who acknowledge that lead ammunition is a major problem for wildlife, not all are convinced that outlawing it is the answer. Banning lead ammunition outright could alienate hunters, breeding bitterness and making them unwilling to comply with the law and switch to other options, says Chris Parish, conservation director at the Peregrine Fund, who has long worked on the condor recovery project in Arizona.

Instead, Parish champions outreach and voluntary incentive programs to get hunters to make the change. These initiatives educate hunters, provide opportunities to test-drive non-lead ammo, and give hunters a chance to win prizes if they use lead alternatives. Some programs provide bullets made from copper and other non-toxic metals for licensed hunters in a particular area. Parish's program in Arizona has had 80 percent participation since 2007 in counties where condors are active. Several other organizations and states—including Utah and Oregon—have followed Arizona’s example. “Our major messaging is this is what hunters can do to contribute to healthier ecosystems,” Parish says.

Even in California, with its full ban, the onus is on hunters to make the switch. The new law does not prohibit the sale of lead ammunition and many stores still stock it, says Tira, the California Department of Fish and Wildlife employee. Lead bullets can still be used for purposes other than hunting, including for target practice, at shooting ranges, and by law enforcement. Tira encourages hunters to ask store employees for help to purchase legal loads. Wildlife officers are empowered to check the ammunition hunters have with them in the field, like they would check a hunting license. If caught using lead ammunition, first-time offenders will face a $500 fine. Subsequent offenses will merit fines between $1,000 and $5,000.

The California Game and Fish Commission decided to gradually expand the legal requirements to different areas, species, and gun types over five years, giving hunters time to prepare for the change. The state wildlife department educated the hunting public about the rule while gradually phasing out lead ammo for hunting bighorn sheep, large birds (like pheasant), small mammals (like jackrabbits), and nongame mammals (like raccoons). Now that the final step—extending the ban to the harvest of small birds (like quail) and other large game (like deer and wild pigs)—is in place, Tira hopes there will be less confusion and enforcement will be easier.

Assuming all goes as planned, this legislation marks what looks like a new chapter for the California Condor. The winged giants still face other serious challenges, like collision with and subsequent electrocution from power lines. But there’s reason to hope this next phase will be one of recovery, with hunters stepping up for these charismatic birds.

Swapping to non-lead bullets could help save this bird.

For the first time in decades, the odds are looking more in the condors’ favor.