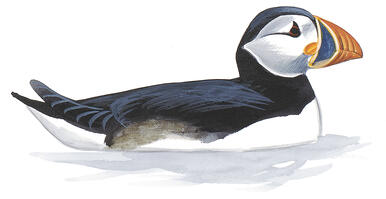 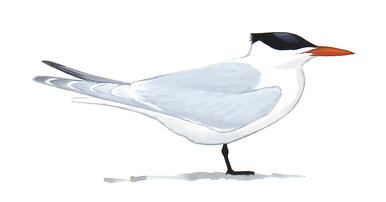 Before the first specks of dawn emerge on the horizon, volunteers and interns on Seal Island in the Gulf of Maine are already waiting and watching. From their tiny wooden shelters, members of Project Puffin train their binoculars and spotting scopes on burrows just 10 feet away. They're on the lookout for the numbered bands on the resident puffins' legs, along with the amount of fish each chick is being fed.

“Seeing how many fish a puffin chick gets at a certain age is really important because then we can inform fisheries that may be going after the same fish that they need to be set aside and protected,” says Keenan Yakola, research supervisor for Seal Island.

The dawn-to-dark feeding survey is just one of the many studies the interns and volunteers conduct during the summer nesting period. They also do counts on a variety of species, including Arctic and Common Terns (as seen in the video above, taken by last year's crew). Since 1973, Audubon's Project Puffin program has fought to restore seabird populations in the gulf through various forms of research. Prior to these efforts, colonies only resided on two of the seven islands near Bremen, Maine. Now, Atlantic Puffins, Razorbills, Great Cormorants, guillemots, terns, and many others have reclaimed their nesting grounds to create an annual avian utopia.

The majority of the studies have lasted more than a decade, providing a trove of information on diets, nestling productivity, and population numbers for breeding colonies. This year’s team on Seal Island is also heading up a new project to measure puffin-chick growth, previously only done on Matinicus Rock. The researchers will track individual pufflings throughout the season, weighing and measuring the infants, then using the data to gauge the overall health of each bird.

“These [ratios] can give us insight into whether it's a good year for the puffins or a bad year,” Yakola says. “Then we can compare these values to what we are seeing in the feeding studies.”

Following chicks around sounds adorable, but life on the island isn't always so idyllic. The work done on Seal Island and other nesting sites has revealed a serious threat to seabirds: climate change. Over his three years working with Project Puffin, Yakola has noticed that the fish in the gulf have started changing their positions within the water column, seeking deeper depths for cooler, more tempered waters. This could spell disaster for the birds that feed and depend on them. Terns, for instance, forage near the top six inches of the water column; if the fish they hunt are moving farther down, they'll have a difficult time feeding their young.

Recent summers have brought an increase in storms as well, posing yet another danger to the seabirds. Because tern chicks are unable to thermoregulate and adapt to sudden drops in temperature, large storms and heavy fogs can prove fatal.

Again, the only way these upshots are known is through years of tireless data collecting. Once the interns and volunteers arrive on the island in June, they're there 24 hours a day—eating, sleeping, researching, filming—until the season ends in August. The program not only aids in the protection of the birds' nesting sites, but also helps cultivate a new generation of conservationists.

“This project is going to continue for many years to come, so we’re going to influence a lot of people into the future," Yakola says. "Many people that worked here in the past have gone on to start their own conservation programs. It all started for them here on this seabird island.”

To get a sample of what life is like for the birds on Seal Island, tune into Audubon's live feeds over at explore.org. Options include a puffin-burrow cam, a cormorant cam, a guillemot cam, a busy ledge cam, and a tern-filled boulder cam.