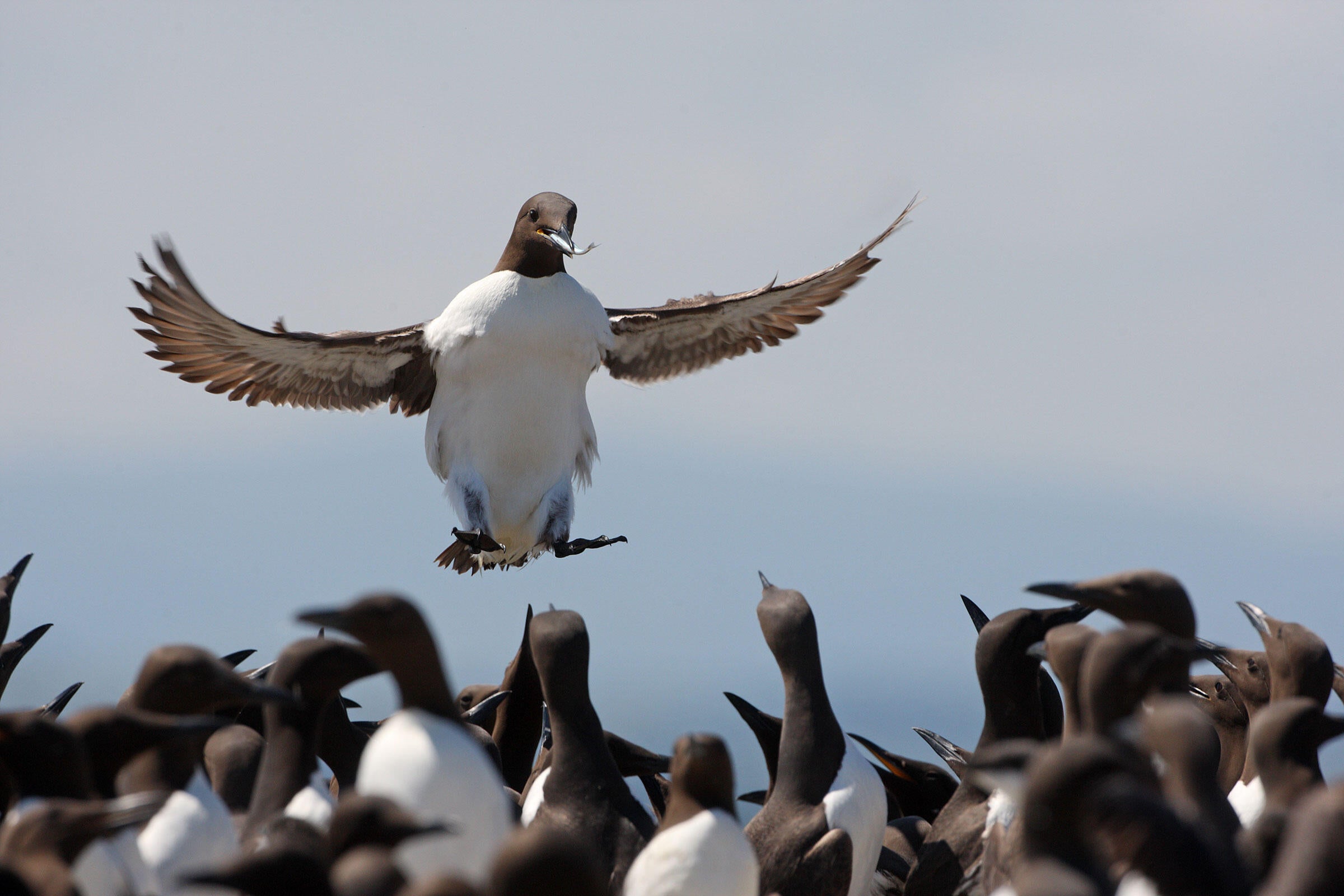 A new study finds that these extreme events at sea can rapidly redistribute habitats and animals, including fish and seabirds.

Heatwaves can be dangerous affairs, intolerable to deadly, especially for those who don't have access to air conditioning or a body of water to cool off. But these extreme events aren't limited to land-dwellers: Ocean animals also endure streaks of stifling temperatures, known as marine heatwaves, that can persist for months and seem to be growing more common as the climate warms.

Up until now, most research on marine heatwaves has focused on stationary organisms like coral reefs that have no choice but to endure the heat—and often perish. But a new study conducted by researchers at the National Oceanic and Atmospheric Administration examines how mobile species like fish respond to these climatic events. Published today in Nature, the study found that marine heatwaves can raise the temperature of hundreds or thousands of miles of cold-water habitat, forcing wildlife to quickly move to cooler areas to survive.

“In past marine heatwave events along the West Coast, there have been over 1,000 kilometers [620 miles] of displacement,” says Michael Jacox, lead author of the study. “The temperatures you would normally see in southern California might actually be found off of northern California or even Oregon.” These dramatic, temporary shifts affect not only aquatic animals, but also the seabirds that feed on them.

“We’re looking at these marine heatwaves in a new way, which is to look at how they displace habitat across the surface of the ocean,” Jacox says. Displacing this habitat displaces fish, too. Atlantic cod, for example, prefer temperatures of around 47 to 59 degrees Fahrenheit, while Arctic cod live at temperatures below 41 degrees. When a marine heatwave hits, this original habitat disappears from the region, forcing organisms to flee the affected area in search of cooler, more comfortable waters. The researchers call this distance that species have to travel the “thermal displacement.”

To understand thermal displacement, the researchers analyzed nearly 40 years of NOAA’s sea surface temperature data and found that these heatwave-induced shifts can be huge, in some cases reaching as far as 1,500 miles—equivalent to the distance from Boston to Miami. Many of the largest recorded thermal displacements have been caused by El Niño events, which are unusually warm phases that occur in the tropical Pacific Ocean every few years. El Niño events often line up with observed changes in fisheries catch. For instance, during the 1998 El Niño fish populations shifted poleward and, as a result, fisheries caught significantly fewer anchovies—the lowest catch in a decade—and instead caught more sardines and mackerel in the warmer Peruvian waters.

Even a couple of months of abnormal fish densities can send ripples up the food chain.

These sorts of species redistributions make marine heatwaves important to study, says Michael Alexander, a co-author of the study, because even a couple of months of abnormal fish densities can send ripples up the food chain. “If birds hatch in the spring and then are not able to get the fish they’re usually accustomed to, that could lead to the chicks starving," he says. In the worst cases, it can cause adult seabirds to starve, too.

The most extreme case known to science occurred in the Northeast Pacific from 2014 to 2016, when an unprecedented marine heatwave known as “the blob" shifted thermal habitats more than 460 miles, according to the study. During that period, the region experienced one of the largest seabird die-offs in Alaskan history: Tens of thousands of emaciated alcids washed up along the coast. Since 2015, these mass seabird die-offs in the Northeast Pacific have become nearly annual occurrences, affecting Cassin’s Auklets, Common Murres, and Short-tailed Shearwaters, as well as Alaska’s Native communities that rely on the eggs for protein.

The mass seabird death associated with the blob "is a very prominent example of thermal displacement,” says Kathy Kuletz, a U.S. Fish and Wildlife Service biologist. She recently co-authored a study that attributes the death of an estimated 1 million Common Murres in 2015 to the blob. In fact, the seabirds' deaths on the surface gave scientists a clue that something serious was happening underwater—and the new analysis confirms that it was a marine heatwave. Like fish populations, some seabird species have also shifted their distributions under relatively short periods of time, Kuletz says. During the the region's warmer-water years of 2017 to 2019, Thick-billed Murres moved north, appearing in higher densities in the southern Chukchi Sea than in their regular habitat of the northern Bering Sea.

Marine heatwaves are growing more common with climate change, and they also offer a preview of how long-term warming will affect fish species and marine ecosystems. The North Pacific and Arctic Ocean are warming rapidly, and they will likely continue to experience thermal habitat shifts, Jacox says. The effects on wildlife are already apparent: Some seabird nesting colonies in the Arctic are shrinking as fish populations migrate north, making it hard for birds like Mandt’s Black Guillemots to catch enough food to raise chicks. How species will respond, and whether they will be able to adapt fast enough, are open questions.

In the meantime, humans can begin making the necessary changes to mitigate the worst impacts of future displacements. This new research will help scientists and the fishing industry develop management and conservation measures that factor in marine heatwaves, says William Cheung, a professor at the University of British Columbia. "We need to start thinking about how fisheries will adapt," he says. "Not only to long-term warming, but also to these short-term episodic heatwaves and other extreme events."