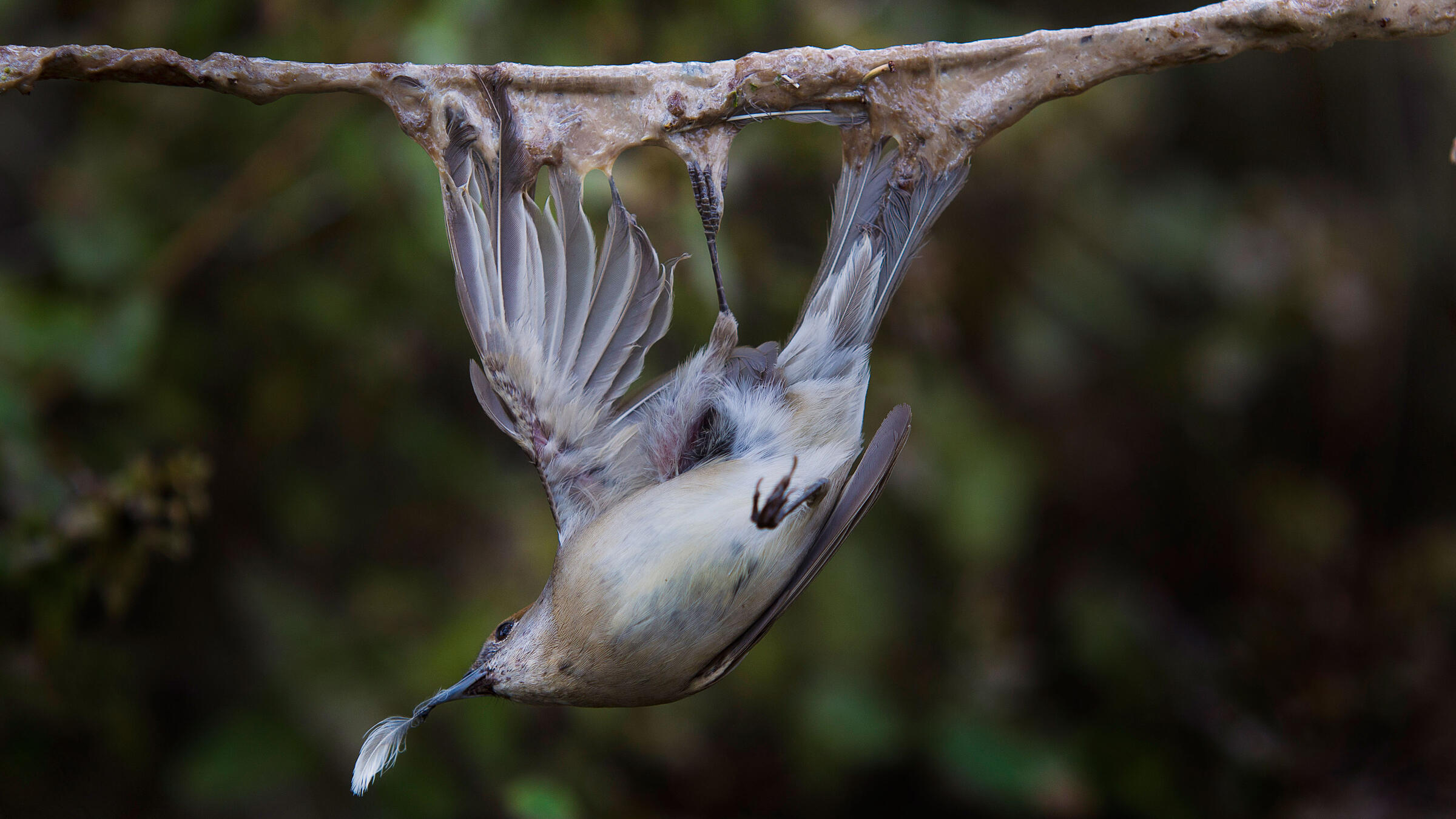 A female Blackcap hangs from a gluey, sap-covered branch made by songbird poachers in Ayia Napa, Cyprus. The bird was released by activists from the Committee Against Bird Slaughter. Photo: David Guttenfelder/National Geographic/AP

Poachers grew gardens of acacia to conduct illegal activities on a British military base.

Every fall millions of songbirds traveling from Europe to Africa have their migrations cut short by trappers who illegally snare the birds and sell their meat on the black market. In 2013 the documentary Emptying the Skies shed light on the plight of songbirds in the Mediterranean island of Cyprus. Now, a new report shows that almost one million of those fated birds are trapped on a working British military base on Cyprus.

The report, produced by BirdLife Cyprus with the support of the U.K.’s Royal Society for the Protection of Birds, reveals that 900,000 songbirds were poached on the Dhekelia Sovereign Base in 2014 during fall migration. This is the highest known tally since BirdLife Cyprus began monitoring the illegal trade in 2002. In total, an estimated two million birds were killed across the island from August to October. “We’ve described this as an industrial scale [of trapping]; it’s absolutely huge,” says Tim Stowe, international director for the RSPB.

Songbird poaching was outlawed 40 years ago on Cyprus, but it continues to feed the insatiable market for ambelopoulia, a traditional island dish of pickled, grilled, or boiled birds. What was once a small-scale traditional activity has become a lucrative, multimillion-euro trade run by organized poaching gangs. Poachers coat branches in glue and wait for songbirds to get stuck—the gruesome result is shown above.

As the stakes become higher, the methods of trapping become more sophisticated. To snare the birds, poachers grow vast quantities of invasive bushy acacias that attracts avians. Then, when the bushes are large enough, the trappers cut corridors between the plants and hang up kilometers of mist nets. These illegal plantations are so extensive that they’re visible from space, the RSPB said in a press release.

The trappers then play recorded bird songs to lure the targets: 20 to 30 species that are favored for ambelopoulia. But 152 species—78 of which are threatened—are routinely caught in the indiscriminate nets. Many are simply thrown away. Among the victims are Cyprus Warblers and Cyprus Wheatears, species that occur only on the island. “Some die just hanging in the net, some are pulled out and killed by the trappers,” says Stowe, who witnessed nets full of songbird corpses during one of his recent trips to Cyprus.

As BirdLife Cyprus discovered, the military base makes for an easy hunting ground for trappers because it lacks fences. “Unfortunately this area has been managed by the trappers for a number of years and has now become a mist-netting hotspot,” says Tassos Shialis from BirdLife Cyprus. The RSPB and BirdLife Cyprus are currently campaigning for the illegal acacia plantations to be removed. “If they get rid of the acacia and cut it down, it would take years before it would regrow,” says Stowe. “It solves the problem for years to come.” Military personnel stationed at the base began removing the bushes on the military base last December, and the hope is that if it continues, it will quash at least part of the trappers’ trade.

Of course, BirdLife Cyprus has been trying to stop this disastrous practice for years, but the trappers are canny, and confronting them can be risky. Investigators often turn up at a trapping scene, only to find that the poachers and equipment have disappeared. “The trappers remove the evidence,” says Stowe. “And then you [also] face attack. It’s quite dangerous.”

The other half of the challenge is education—that’s BirdLife Cyprus’s focus now. “Our anti-trapping campaign has been running for many years, but in the last few years we have scaled it up,” Shialis says. The organization teaches schoolchildren about bird migration and how the ambelopoulia trade threatens this natural marvel. Their hope is that these educated youths will resist recruitment by poaching gangs.

In the meantime, conservationists need a quick fix. The race is on to uproot the shrub and its constant gardeners, before the songbird migration begins anew in August.

Support Cyprus's songbirds by either contacting John M. Koenig, the U.S. ambassor to Cyprus, or writing to the Cyprus Tourism Organization. BirdLife Cyprus is leading efforts to prevent poaching on the island; donate to their Champions of the Flyway team to support their work.