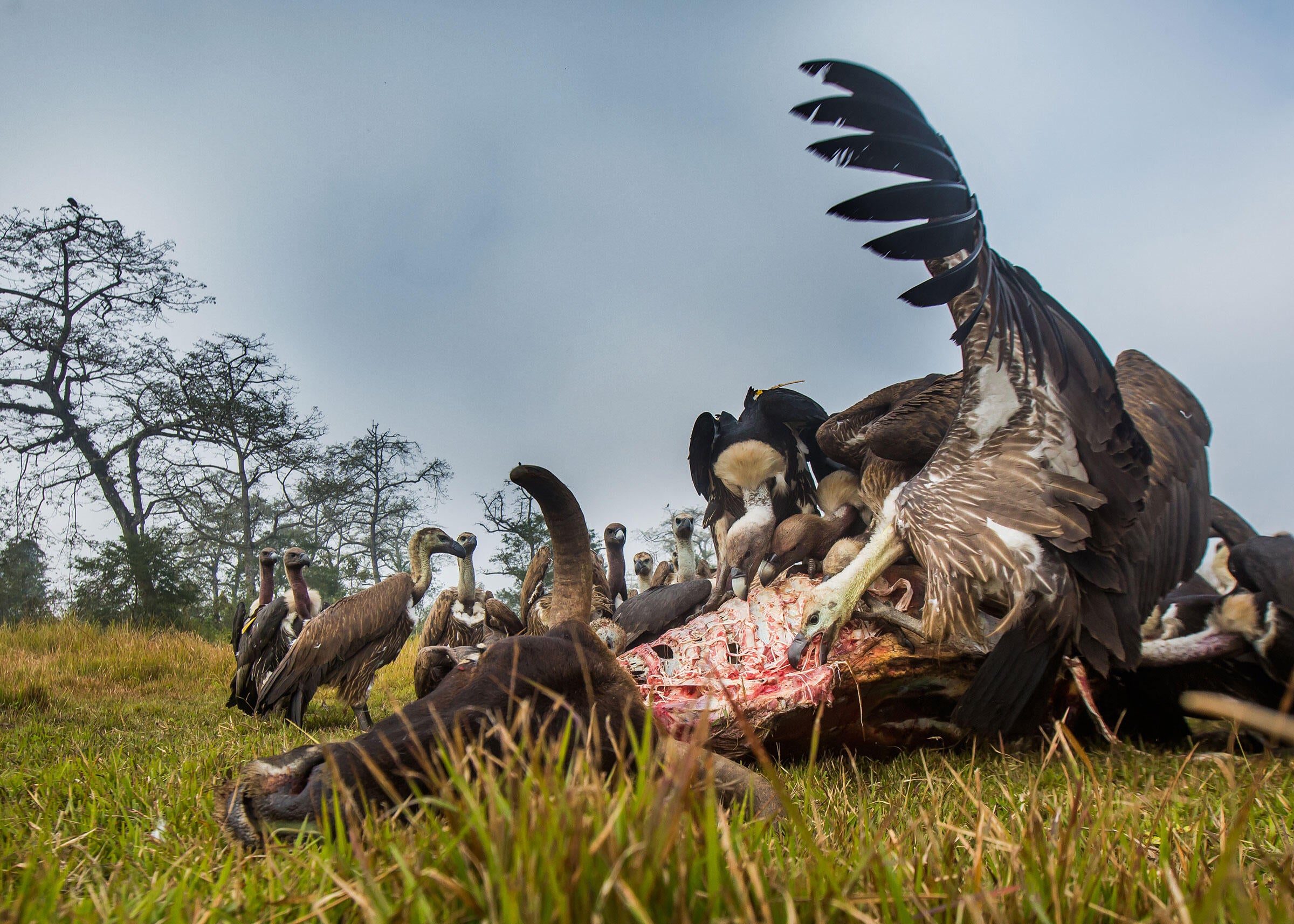 A campaign against a lethal painkiller, paired with “restaurants” that supply clean carcasses, may just save these species.

At a restaurant in Pithauli, Nepal, there's only one offering: raw beef. The meal isn’t for people—it’s for endangered vultures. While the birds feast, tourists in a nearby blind can watch up to eight species pick apart the flesh. The site, a refuge just north of the India border, has been the heart of vulture conservation across the region for more than a decade.

But on a Monday in September, as wild vultures dined on a buffalo carcass, the scene was unusual even by the vulture restaurant’s standards. A small crowd of government dignitaries, scientists, and community leaders gathered to listen to celebratory speeches next to an aviary holding 12 White-rumped Vultures. Next, officials opened the door, and the caged birds joined the feast.

The occasion marked the first release of captive-bred vultures in Asia. The fanfare, however, celebrated an even bigger milestone: It meant Nepal is once again a safe place for vultures to roam.

Thirty years ago, no one had reason to worry about the scavengers’ well-being. Millions of White-rumped Vultures feasted on rotting remains throughout the Indian subcontinent, and ornithologists considered the species to be the most numerous large raptor in the world, says Chris Bowden, program manager of a non-profit consortium of wildlife groups, Saving Asia’s Vultures from Extinction, or SAVE. Then, the birds started dying.

“It was absolutely devastating,” Bowden says.

The birds’ numbers plummeted through the 1990s. By 2000, White-rumped populations had declined by more than 99 percent, now totalling fewer than 10,000 adults. “We were really staring at extinction 10 years ago,” Bowden says.

Other species were also dying in droves: Long-billed and Slender-billed Vulture populations were just 3 percent of their original size; Red-headed Vultures, named for their scarlet faces, suffered losses of more than 90 percent over the same period. The International Union for Conservation of Nature had listed all four species, found only in South Asia, as critically endangered by 2007.

For years, scientists couldn’t figure out what was behind the fatalities. It wasn’t until 2004 when researchers in the United States attributed the deaths to a commonly-used pain reliever that farmers give their cows when the animals stop producing milk.

For years, scientists couldn’t figure out what was behind the fatalities.

The drug, called diclofenac, is also used by people to treat painful conditions such as arthritis or migraines. It doesn’t work that way in vultures. In the birds, diclofenac triggers kidney failure, causing toxic uric acid to build up in their tissues.

Identifying the culprit of the birds’ dramatic decline was a huge step forward. "It’s something we can solve," Bowden says. Governments, scientists, and communities across the continent mobilized to get rid of diclofenac, and Nepal, India, and Pakistan all banned the drug for veterinary use in 2006. But that didn’t guarantee its removal.

The diclofenac ban has been hard to enforce because non-toxic alternatives are more expensive and less effective, says Krishna Bhusal, head of vulture conservation for the non-profit Bird Conservation Nepal. (For years, drug companies also produced extra-large vials labeled for human use, in convenient cow-sized doses. In 2015, India banned the heavy-duty vials).

“We’ve all been broken records for 14 years, talking about diclofenac,” Bowden says. “Yet still there’s skepticism and reluctance for people to really take that as seriously as they needed to.”

Since the beginning of the crisis, Nepal has taken the lead on both eradicating the drug and aiding struggling vulture populations. This is largely because of the vulture restaurant that started in Pithauli, a town of a few thousand people in the Nawalparasi district, where the captive-bred vultures were recently released.

There, in 2006, community leader and ornithologist Dhan Bahadur Chaudhary launched a bold plan to feed vultures untainted meat at a community-run feeding site. He dubbed it the Jatayu Restaurant, referencing an ancient Hindu story featuring a heroic vulture.

Chaudhary grew up in Pithauli, playing in its jungles as a kid, so he knew how to pull off the idea. He bought aging cows from nearby farmers, built a shed for them to live out their elderly years without diclofenac, and recruited locals to help with the project. (In Nepal, and other predominately Hindu countries, cows are regarded as sacred and forbidden to kill by law. Often, retired cows are a finanical burden to farmers.) Now, when a cow dies, community members skin its hide and feed the carcass to vultures. The income from the leather and visiting tourists goes to manage the restaurant and a visitor center and support community projects.

Nepal is now seeing the first hints of a vulture recovery on a larger scale.

Over the years, the vulture conservation work has expanded beyond Pithauli. Safe-feeding sites have opened in five other areas in Nepal, and spilled out to India, Pakistan, and Bangladesh. And conservationists looking to protect vultures have taken a bigger-picture approach. A host of organizations have worked together to guarantee large swaths of land around the restaurant sites are diclofenac-free. Making these “vulture safe-zones” a reality required close collaboration with farmers, veterinarians, and pharmacies. But it's worth the effort, says Bowden, because keeping the birds’ foraging range free of diclofenac is the best way to protect the species.

And it's already paying off. At the Jatayu Restaurant, nesting vulture populations have more than doubled, and now Nepal is seeing the first hints of a vulture recovery on a larger scale, Bowden says.

That’s why vulture conservation groups, led by Bird Conservation Nepal, felt confident enough to release the captive-bred vultures this fall. A test run last year—a release of GPS-tagged vultures raised, but not born, in captivity—has shown birds are now less vulnerable to poisoning. All are alive and well, except for one unlucky victim of a leopard encounter.

While these successes for vultures are promising, they're still preliminary. “It would be complacent to say there’s no risk of them going totally extinct,” Bowden says. Even though routine monitoring shows the majority of Nepal is free of diclofenac, the same is not true outside its borders. In India, the Bombay Natural History Society is still holding onto hundreds of birds at its breeding centers, until the larger, harder-to-regulate country is deemed safe.

But there's now hope the vultures in Asia have turned a corner. “We are going to save these species,” Bowden says. “Four years ago, I couldn’t say that with conviction. Now, I can.”