One day this July, when the temperature in Raleigh, North Carolina, soared, the state’s First Lady, Kristin Cooper, and head gardener, Charles Dixon, strolled the grounds of the governor’s mansion. They were looking for a place for a new garden, specifically one that would use native plants to create a habitat beneficial to some of the state’s 350 species of resident and migratory birds.

“It wasn’t very encouraging,” Cooper recalls. “We had a lot of dry shade, and we had this privet hedge. The hedge had totally choked out everything.”

The First Lady admits she is “not a fan” of privet, a nonindigenous shrub also known by its Latin name, Ligustrum. “I think the flowers are stinky,” she says. “They make me sneeze. But I thought I’d just have to suck it up, because I couldn’t wrap my head around taking out this giant 25-foot hedge.”

Dixon readily rose to the challenge. “Oh, I can take it down,” he replied.

With his crew, Dixon would ultimately remove about 50 privet bushes, making way for the garden that Cooper officially unveiled last Thursday in a ceremony attended by about 100 people—most of them members of Audubon chapters and plants societies from across the state. Cooper also read a proclamation by her husband, Gov. Roy Cooper, pronouncing October 22–28 Native Plants Week in North Carolina. 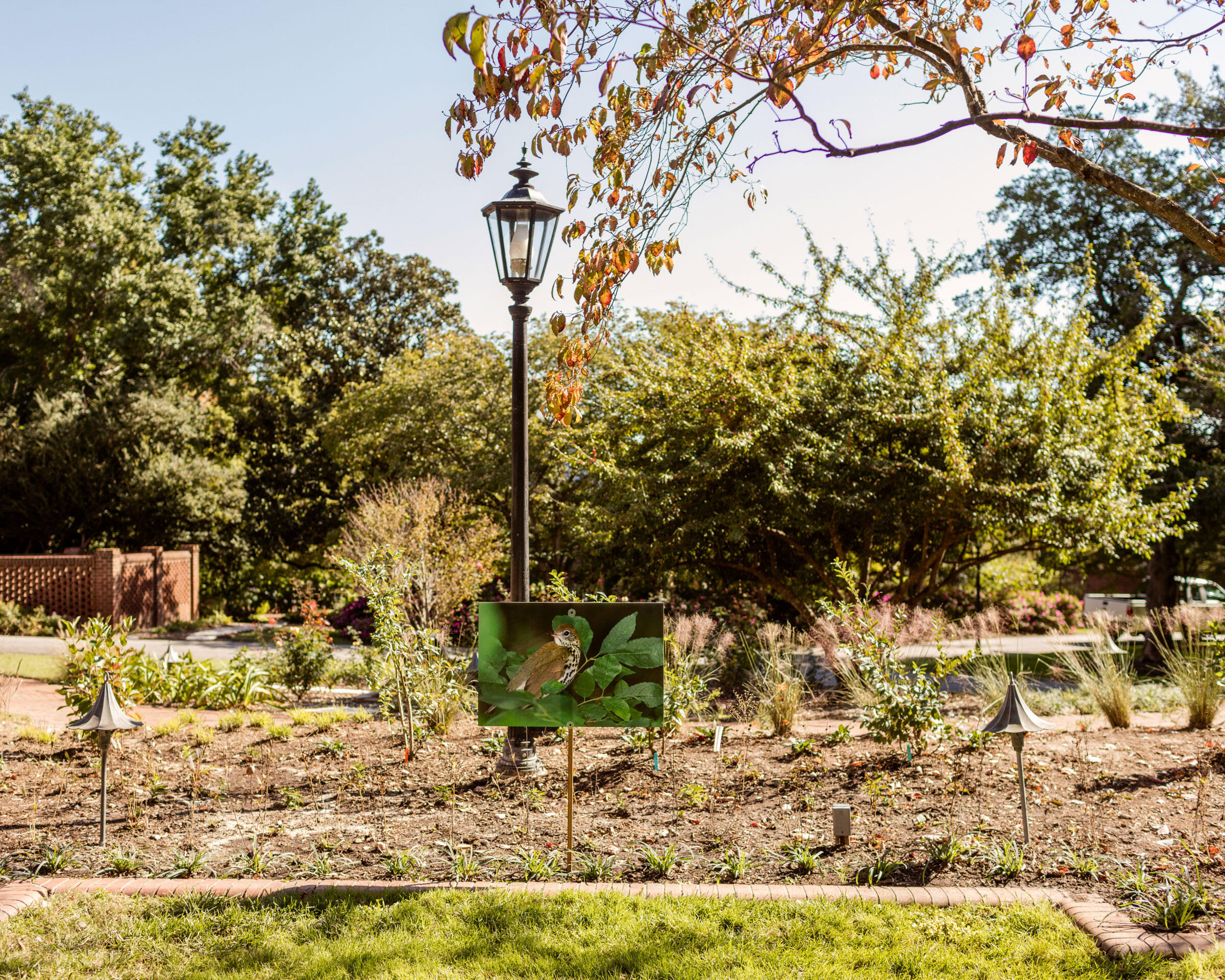 A sign shows off the type of bird the future habitat will benefit. In this case, a Wood Thrush. Photo: Jeremy M. Lange

In the shade of a towering oak tree, the crowd mingled while sipping iced tea and lemonade and eating cookies. About 1,000 recently planted specimens dotted the earthen beds surrounding the yard where they stood—a plot 100 feet wide and 40 feet deep. Many of the plants, 25 species in all, were merely sprigs. But in just a few months’ time they will have grown, leafed-out, and bloomed, constituting the first such garden at a governor’s residence in the country.

“We’re hoping by spring that it’s going to be absolutely magnificent back here,” Cooper, wearing dangling earrings decorated with tiny bluebirds, said in an interview after the ceremony. (The First Lady says she started birding in 1996, while snowed in by a blizzard in the North Carolina mountains. She bought an Audubon field guide, positioned feeders outside a window of her home, and kept a journal of the birds she saw. She’s been hooked ever since.)

As Cooper explained, North Carolina’s diverse bird population survives, in part, on more than 3,980 native-plant species found across the state. Unfortunately, as she also said, some of the plants—26, to be precise—are rare and considered endangered, primarily due to climate change. Similarly, up to 314 North American bird species have been identified by Audubon as climate threatened, and native plants, which provide more food and the best shelter for birds and other wildlife, will help them survive the changes. The garden is intended to raise awareness of the importance of native habitat, and to serve as an inspiration and model for individual residents and schools.

According to Heather Hahn, executive director of Audubon North Carolina, the seed of the idea for the garden was planted two years ago, when Cooper’s husband was the state’s attorney general and a candidate for the office he now holds. Standing at the dais on the steps of the ornate, Victorian brick building, Hahn recalled speaking with Mrs. Cooper at some point during the campaign.

“We got an inkling from the First Lady that she might like some birding with some of our staff,” Hahn says wryly, suggesting that Cooper “might have been a little tired from the traveling and the campaigning.”

At the invitation of Hahn, Mrs. Cooper went birding with a group led by Curtis Smalling, Audubon North Carolina’s director of conservation. “What we thought was going to happen was that Curtis was going to show her a bunch of birds that she didn’t know,” Hahn says. “Curtis did have a few things to teach—but she knew a lot of birds.”

After Roy Cooper won the election and he and Kristin moved into the governor’s mansion, the state Audubon office contacted her. By that time, the national Audubon Society had launched its Plants for Birds initiative, with the goal being to “put a million native plants in the ground, all across the country, for birds,” Hahn says.

“We called up [the First Lady] and said, ‘Hey, we’ve got an idea we’d love to come and talk to you about. And it has to do with the executive mansion,’” she says. “So we came here, and did a great walk around the gardens and the property, and we just talked about what might be possible.”

“It’s a nice marriage of her passion and our approach, and creates a great platform for sharing both” Rowden says. “I’d like to see this replicated elsewhere.”

One place it will certainly be replicated is at the Governor and Mrs. Cooper’s other residence, in the mountains near Asheville, N.C. Plans are underway for native plantings there, led by the garden designer, Ben Skelton, who did the garden at the executive mansion. Working with Audubon has been an eye-opener for the plantsman. The collaboration guided his selection of the plants he used, and he learned the purpose of each one—providing food, shade, winter ground cover, and other benefits to birds and pollinating insects.

“I’m starting to understand the ecology more,” Skelton says, sitting on a bench beside Mrs. Cooper. “It makes the planting aspect more fun. When you’re able to put some stuff in the ground, and think, That plant is important; it has a purpose beyond humans enjoying it as ornamentation. It feels good to help nature.”

“A lot of the native-plant movements now are about water conservation—plants that use less water and chemicals,” the first lady chimes in.

“Yeah,” Mrs. Cooper says. “You can help a lot of birds with just one plant.”

You can help! Native plants provide the food and habitat birds need. Use our database to discover which plants are best for your birds.

Why Native Plants Are Better for Birds and People