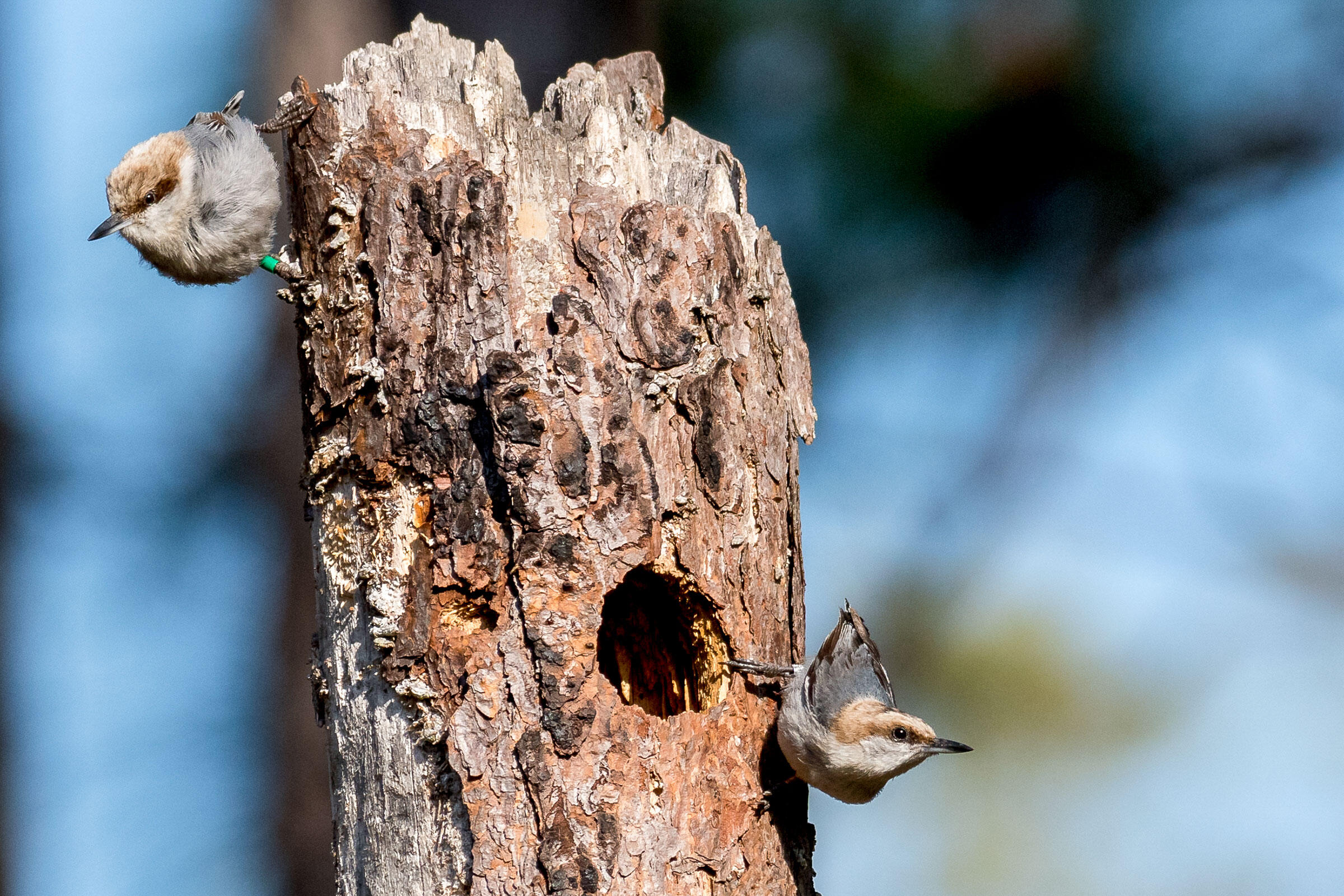 A Brown-headed Nuthatch pair at the Tall Timbers Research Station in Florida. The banded individual is a male cooperative breeder that went on to raise a family of its own. Photo: Brian Lloyd

Nuthatches Take Up Nannying When There’s a Shortage of Mates

A forest experiment in Florida reveals what drives male Brown-headed Nuthatches to care for other couples’ chicks.

At first glance, there’s nothing odd about a nuthatch on a grocery trip. The little chestnut-capped bird shimmies down the trunk of a loblolly pine, snatches up a green caterpillar, and zips backs to a nest to deliver it to a famished chick.

But this male Brown-headed Nuthatch isn’t feeding its own nestlings; it’s acting as a manny and helping another pair raise their brood. The behavior is unusual. Bird nannying, better known as cooperative breeding, is practiced by fewer than 10 percent of avian species, including Red-cockaded Woodpeckers and American Crows. The guidelines are straightforward, though. A non-mated individual (or individuals) bunks with a nesting pair to pitch in with chick care for a season. Sometimes the helper is related to the hosts; sometimes it’s not.

Brown-headed Nuthatches, native to the southeastern United States, are one of only a handful of known cooperative breeders in North America. Scientists believe environmental pressures, like lack of available habitat, play a critical role in driving both sexes of the species to become au pairs. The behavior could also stem from a surplus of males or females in a population, which drives up mate competition and prompts birds to find more creative means of survival.

To test the second idea, Jim Cox, a vertebrate ecologist at Tall Timbers Research Station, and Emily DuVal, a biologist at Florida State University, spent six years experimenting with nuthatch sex ratios in a loblolly pine forest near Tallahassee and tracking the outcomes. The findings, published earlier this month in the journal Behavioral Ecology, shed light on how the tree climbers decide to enter the nanny gig economy.

Based on his previous work on Brown-headed Nuthatches and their response to wildfires, Cox knew that under typical conditions, about a quarter of the species’ territories would contain a cooperative breeding group. The majority of those, he projected, would consist of a male-female pair and a related male helper.

Starting off, Cox created two 270-acre experimental plots in Tall Timbers with less than a mile of buffer space in between. He took young male nuthatches from the first site and moved them into nests on the second site to skew the population with testosterone. He then did the same thing with female nestlings in the reverse direction to create an estrogen-packed population on Plot A. Halfway through the study, Cox switched up the sex ratios on the sites to rule out habitat quality as a reason for breeding behavior.

During the course of the experiment, Cox and his team relocated 164 nestlings. (Adults, DuVal says, would have just flown back to their original neighborhoods.) The effect was drastic. “Walking into the male plot was like walking into a mining camp,” Cox recounts, with the exuberant males bouncing around, singing energetically for the females‘ attention. To keep tabs on the birds and their sexes, the scientists also gave them colored ankle tags and had their DNA tested.

Overall, Cox and DuVal found the results matched their prediction: Male nuthatches were likelier to skip breeding and babysit when there were fewer mates and more competitors in their territory. On average the team counted 15 mannies on the male-biased plots each year; Cox would normally expect to see only four or six a year. Many nests contained two or three helpers.

The impact was far less pronounced in the female-dominated plots, where Cox counted only four helpers over six years. This was expected given that female nuthatches disperse earlier and farther after fledging, so they have less reason and time to babysit.

The research confirms what experts on cooperative breeding have long suspected. “It’s a very exciting study,” says Stephen Pruett-Jones, a behavioral ecologist at the University of Chicago, who was not involved in the experiment. “They’ve looked at one aspect of many ideas about the behavior and the role that adult sex ratio can have on group structure and decisions.”

DuVal says she can’t be exactly sure why changing the sex ratio would boost the number of helpers. “Our key hypothesis really is that it shifted mate availability,” she says. “The idea is that when you have fewer options to breed independently, cooperation becomes a better option” for individuals competing to survive. But she also notes that the helper birds could be getting some action on the side. DuVal’s research so far suggests Brown-headed Nuthatches are not very faithful: Eggs in the same brood will often have multiple fathers. In future studies, she and Cox hope to figure out whether males use their hunky nanny roles to mate with nesting females—or nearby neighbors.

After the success of this experiment, Cox and DuVal are excited to dive more into the sex, or sexless, lives of nuthatches. The way they see it, what happens in Florida’s loblolly pines shouldn’t stay there.

At This Alabama Middle School, the Birds Belong to Everyone

An outdoor classroom in Birmingham strives to bring students, nature, and environmental justice together.

Understanding the bird's genetic diversity could yield insights about how best to protect it and other threatened species.