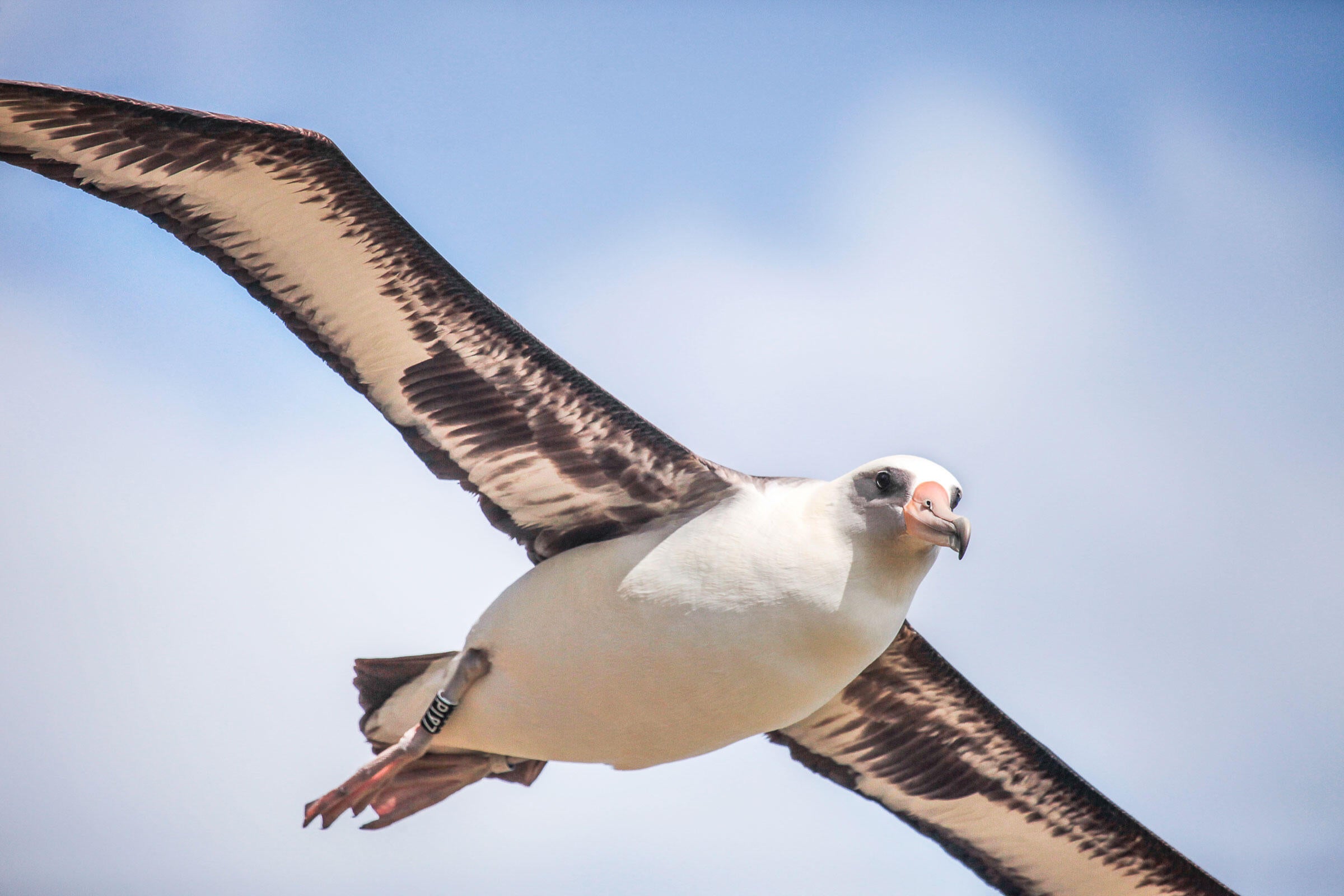 At the edge of a U.S. Navy airfield at the edge of a Kauai beach at nearly the western edge of the United States, biologist Rebecca Johnson reached under a large white bird, pulled out an egg, and handed it to me. It was mostly white, about the size of a 12-ounce soda can, with a few brownish red spots that are likely a combination of blood and the iron-rich, red dirt for which the area is known. The egg, which was laid by a Laysan Albatross nesting at the Pacific Missile Range Facility (PMRF) on Kauai, presented both a problem and an opportunity.

For millions of years before humans arrived, Laysan Albatross used the Hawaiian Islands as breeding grounds. But as more people settled in Hawaii, introducing pets and predators, the birds were extirpated from the main islands. In the late 1970s, a few pioneering Laysan Albatross started re-colonizing Kauai and, later, Oahu. Because the species exhibits a high degree of natal philopatry, meaning they return to the place they hatched to breed, the birds are hard-wired to return to these re-emerging colonies—even if the U.S. Navy would prefer they nest elsewhere.

And so, each November, Laysan Albatross wing their way from the North Pacific to raise their chicks next to the 6,000-foot runway at PMRF. Unfortunately for the birds, at the naval base they are considered bird-aircraft strike hazards. “Pilots see them and think they’re beautiful,” said April Teekell, natural resources manager at PMRF. “But the birds scare them, too.”

To reduce the threat of airstrike at PMRF, in 1988, the U.S. Department of Agriculture began hazing adult Laysan Albatross and destroying their eggs. Each morning, adult birds were caught and driven to the other side of the island where they were released far from jet engines. But, all too often, the birds simply stretched their wings, which reach six-and-a-half feet across, and took to the air, sometimes beating the truck back to PMRF. And no matter how many times their eggs were destroyed, parents stubbornly returned to nest near the Navy runway.

By the early 2000s, Navy staff were eager to find a better solution. After talking with a biologist at the nearby Kīlauea Point National Wildlife Refuge, they hit upon a new idea: They could relocate the eggs to a safer colony, and the chicks would then imprint on that new location and return there when they're grown and ready to nest. The foster parents would be Laysan pairs with failed eggs at protected colonies on the north shore of Kauai.

“We can remove birds one by one,” Teekell said. “But if we move the eggs, if we make sure they don’t hatch here, we’re removing the hazard while also helping other colonies that don’t have the same hazards grow.”

On the December day I visited PMRF, I assisted with the next step in relocating the eggs to colonies far from jet engines. In a closet in a building near the air traffic control tower, Eric VanderWerf tacked blackout fabric over a window, plunging the room into darkness. VanderWerf and his colleagues at Pacific Rim Conservation then “candled” 61 eggs that Johnson and her team had collected from around PMRF. The process determines egg fertility and includes holding a special flashlight (or, historically, a candle) up to the fat end of the egg to see inside.

“The presence of blood vessels shows the egg is developing,” VanderWerf explained to me. “If the egg is old enough, you can see the embryo or even the heart beating.” Of those 61 eggs, 47 were fertile. They were placed into an incubator, which is controlled for temperature and humidity, that tilts to mimic the natural egg rotation from an attentive parent on a nest.

The next day, on a bluff overlooking the Pacific Ocean on Kauai’s north shore, about a two-hour drive from PMRF, VanderWerf crouched near a Laysan Albatross sitting on an infertile egg. There’s an imbalance of males-to-females in the population, and sometimes two females will pair up and lay unfertilized eggs. These nests, along with others holding failed eggs, make perfect adoptive homes. While the albatross clacked her bill, VanderWerf swapped out her egg for a fertile one from PMRF. The whole process took just a few seconds. When VanderWerf backed away, the standing bird looked between her legs at the egg and called, “Eh. Eh. Eh.” Then, she settled on her new egg as if nothing happened.

Since 2004, 428 fertile eggs—from 59 to 84 eggs each year—have been removed from the base and swapped out with nests of infertile eggs elsewhere on the island. In a few days, hopefully, a downy, grey chick will use its egg tooth—a sharp, tooth-like projection on a chick’s beak used to peck through its eggshell—and start pipping its way through the shell I held to freedom. Relying on natal philopatry, in two to five years, this chick will return to land at this site, not PMRF, to begin the process of finding a mate and raising a chick of its own. And when it does, it will probably see VanderWerf and other scientists crawling among the nests, swapping infertile eggs with fertile ones. Because as long as Laysan Albatross stubbornly return to nest at the Naval base, the team will have work to do.

Editor's note: While 14 of the 47 fertile eggs removed from PMRF this season replaced infertile eggs on Kauai, the other 33 took their first flight in a U.S. Navy plane to Oahu, where VanderWerf and his team are hand-raising Laysan Albatross chicks to create a new colony at James Campbell National Wildlife Refuge. We’ll cover that story next month.

In the meantime, watch the below live video of an albatross foster parent sitting on an egg from PMRF, courtesy of the Cornell Lab of Ornithology. As of January 24, it's starting to hatch!