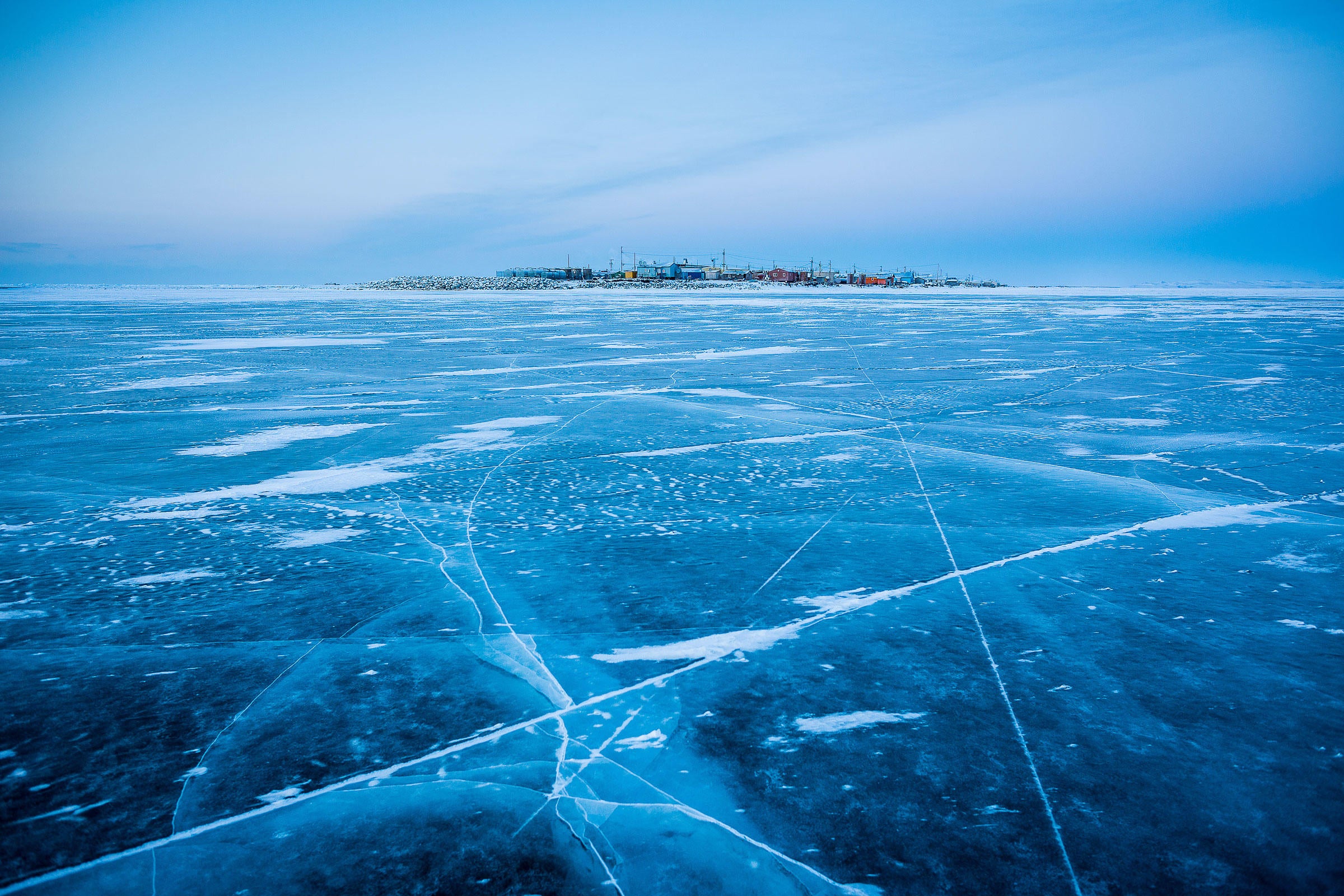 On Thin (and Rapidly Disappearing) Ice

This small Alaskan town is the front line of America’s battle with climate change.

Swan lives in Kivalina, Alaska, a tiny island town with a population just above 350 people. The problem is that, thanks to climate change, warmer temperatures and higher seas are eroding the island’s shores at an alarming rate. “Strange things are happening up here that people need to be aware of,” she says. “And they're only going to get worse.”

Kivalina is essentially a sandbar off the coast of Alaska that used to be 2.9 square miles, but today clocks in at 1.9 square miles (Central Park in New York City, for comparison, is about 1.3 square miles). The community of Inupiat Alaskan natives who call it home were historically semi-nomadic hunters, but in 1905 the U.S. government built a school on the island, and the community coalesced around it. Its permanence, however, was fleeting—the island will be inhospitable within 10-15 years, according to a 2006 analysis by the Army Corps of Engineers. That makes Kivalina a northerly test case for a scenario that’s already happening farther south—in Miami as well as in North Carolina’s Outer Banks (read the cover story from Audubon’s March-April issue).

Located above the Arctic Circle, Kivalina experiences brutal winters for about nine months a year, and until recently, the water surrounding the island froze several feet thick; on hunting expeditions for whales or seals or fish, hunters would camp right on the ice. Today that’s far too risky: The Inupiat used to ride snowmobiles over nearby rivers, treating them as roads—since there are no real roads or even a bridge to connect Kivalina with the mainland—but after a few snowmobiles fell through the ice in the middle of winter, boats became the only option.

The thick ice also used to serve as a barrier, keeping the relentless ocean away from sandy land vulnerable to erosion. Now, even into the heart of winter, the ocean cuts through ice to eat away at the shoreline. A rock revetement, or retaining wall, was constructed in 2008 to slow erosion. It’s helped, says Shearer, but doesn’t stop the flooding—another consequence of the ice-less sea.

The erosion brought about by global warming is compounded by increasingly variable weather that makes it harder for the Inupiat to survive on the island. Sometimes, says Swan, it’ll be the regular -30 degrees Fahrenheit one day and then break the freezing point the next. “We've had rain, we've had subzero temperatures, we've had wet snow, we've had a lot of wind from the south, wind from the north,” she says. The animals don’t know what to do; some starve to death after melting ice prevents them from getting to their prey, and some abandon the migration and behavioral patterns that have made it possible for the Inupiat to survive for centuries. “It's been very hard to find caribou,” says Swan. “That's the main meat for us.”

That Kivalina was facing an imminent crisis was clear back in the early 1990s; the Arctic is experiencing climate change twice as fast as the rest of the world. Despite many studies, many books, many floods, and many fears, in 2009 the federal Government Accountability Office essentially declared that even though the threat had been obvious for years, nothing had been done to save the people of the sinking hamlet.

“What they're dealing with is not something they're going to be dealing with alone,” says Christine Shearer, a researcher at UC Irvine and author of Kivalina: A Climate Change Story. Unfortunately, she adds, “we don't really have relocation policies, we don't have a government agency in charge of it.”

Last month, Sally Jewell, Secretary of the Interior, became the first U.S. cabinet member to ever visit Kivalina, making a brief stop to hear from residents. But Swan is doubtful that any policy could save the island at this point—what’s left is to relocate the village, a daunting challenge for a population that is impoverished, isolated, and non-white. Relocating would cost somewhere north of $100 million, according to the U.S. Army Corps of Engineers, yet Obama’s proposed plan to assist the coastal regions of Alaska only includes $50 million for all of the state’s coastal communities. During Jewell’s visit, she announced that the Department of the Interior would provide another $8 million, says the Native Times, to “fund projects that promote tribal climate change adaptation.”

“I don’t know what those [next] steps are going to be yet,” Jewell said at the time, according to KMOM. “But what I do know is the situation out here is very serious, and it’s indicative of the kind of impacts we’re seeing in climate change everywhere, that this is probably the beginning of what may be to come in other areas.”

Swan was surprised and pleased by Jewell’s visit, but says she’s not sure what will come of it. In the current Congress, climate change’s status as a political punching bag seems to preclude anything being done, no matter how dire the circumstances. To the people of Kilvana, however, the debate over whether global warming is fact or fiction has been settled. The issue has been researched enough, they say, and now is the time to act.