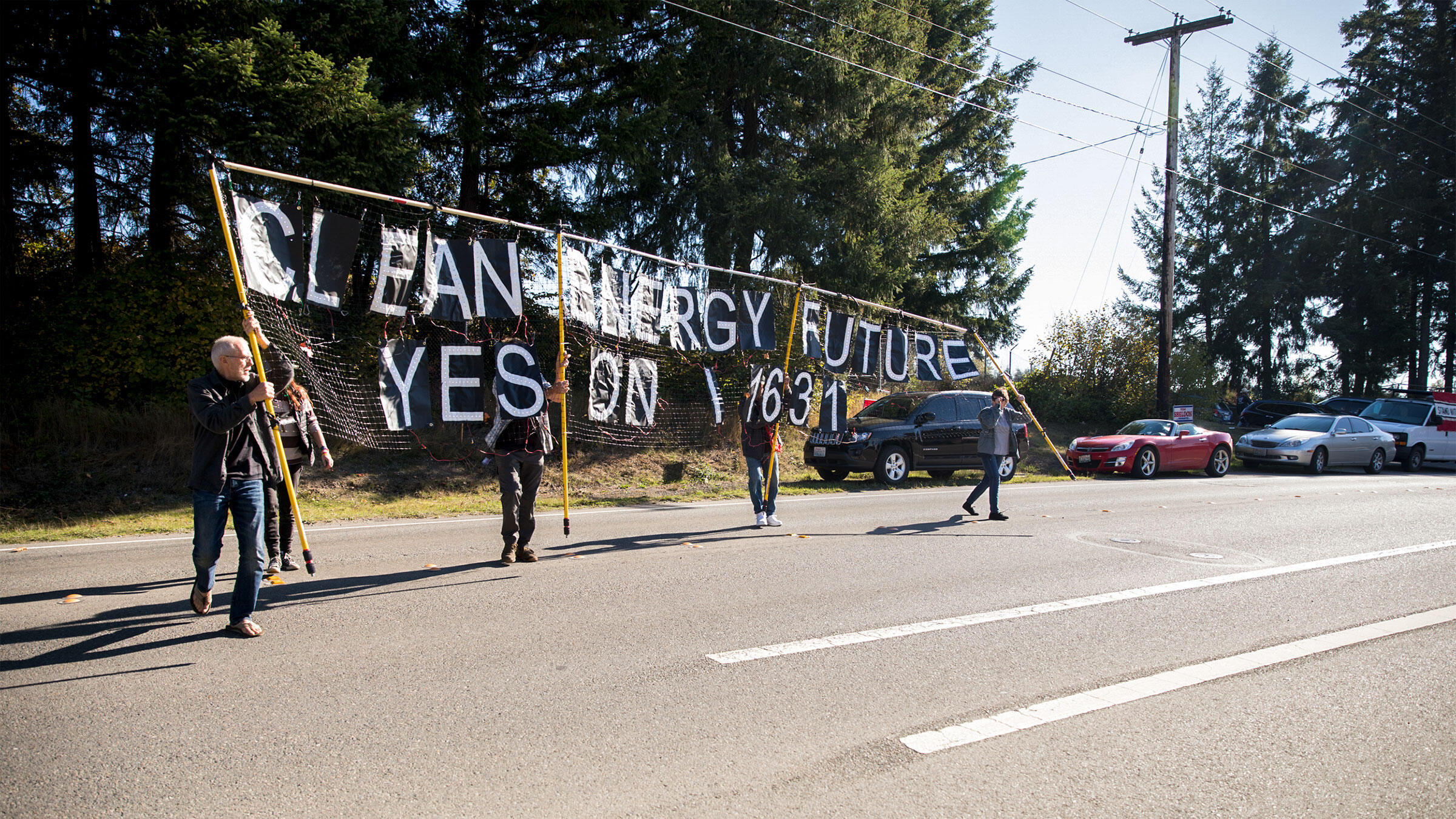 An analysis of campaign spending on I-1631 finds a $15-million grassroots effort up against $31 million of out-of-state oil money.

Over the past few weeks, and into the next, voters in Washington State are mailing in their ballots, which include a measure that would put a price on carbon pollution. If enacted, it would be the first state-wide carbon fee or carbon tax in the United States. Washingtonians voted down a ballot measure for a carbon tax, I-732, in 2016. (Unlike a tax, a carbon fee's revenues fund specific causes.)

The carbon fee, known as Initiative 1631 or I-1631, has the broad support of the environmental community (including Audubon Washington and the National Audubon Society), as well as a coalition of organizations representing working families, communities of color, health professionals, businesses, faith leaders, and tribal nations. If passed, I-1631 would enact a fee of $15 per metric ton of carbon beginning in 2020 and increase by $2 per metric ton each year until the state's greenhouse gas reduction goals are met. Revenues would be invested back into the state, with 70 percent going toward clean energy and transportation, 25 percent toward restoring waterways and forests, and 5 percent toward supporting low-income communities and displaced workers hit hardest by the fee.

The opposition to I-1631, led by oil, gas, and manufacturing companies, mobilized early and has invested enormous amounts of money to defeat the measure. As of the campaigns' latest filings on October 31, the "No on 1631" campaign raised $31.3 million (cash and in-kind), including $13 million from BP America, $7 million from Phillips 66, and $6 million from Andeavor (now Marathon). Meanwhile, the "Yes on 1631" campaign has raised $15.3 million (cash and in-kind), with its largest donation clocking in at $3 million from The Nature Conservancy. (Audubon Washington made a $46,819 in-kind contribution and the National Audubon Society contributed $100,000 in cash.)

An Audubon magazine analysis of the campaigns' contributors and expenditures shows a largely grassroots effort pitted against out-of-state corporate money. Data were accessed through Washington's Public Disclosure Commission, which publishes regularly updated financial information on campaigns. Data from No on 1631 (sponsored by the Western States Petroleum Association) can be accessed here; data from Yes on 1631 (Clean Air Clean Energy Washington) can be accessed here. This analysis includes data from the start of each campaign through October 31, the date of the most recent filing as of publication.

Contributions from Individuals vs. Companies

The campaigns have disparate funding sources. The majority of the Yes on 1631 campaign's funds were given by nearly 2,000 individual donors. Over 1,600 of those donors contributed $500 or less, and more than 1,100 donated $100 or less, altogether totalling some $8 million. The remainder ($7.1 million) was contributed by 74 companies and non-profits that represent environmental groups, communities of color, renewable energy, tribal governments, workers, and doctors.

The vast majority—99.99 percent, or $31.2 million—of the No on 1631 campaign's contributions were given by 29 companies and non-profits representing the oil and gas industry, refineries, farmers, and manufacturing. A total of 21 individual donors from Washington State contributed $2,072 to the campaign, with no single donation over $500.

More than 60 percent of donations to the Yes on 1631 campaign came from Washington State (nearly 1,750 individual donors, including Bill Gates, and 52 companies/organizations, including The Nature Conservancy and Washington Conservation Voters).

Just under 2 percent of donations to the "No on 1631" campaign came from Washington State (14 individuals and 13 companies/organizations). The bulk of the funds came from oil and gas companies outside of the state. (BP America and Valero are based in Texas; Phillips 66 and the American Fuel and Petrochemical Manufacturers are based in Washington, D.C.; Andeavor and Chevron are based in California; and Koch Industries is based in Kansas.)

Contributions to the Yes on 1631 campaign are dominated by environmental groups and wealthy individuals. Total contributions: $15.3 million

Contributions to the No on 1631 campaign are dominated by oil, gas, and manufacturing companies. Total contributions: $31.3 million

The top 10 expenditures from the Yes on 1631 campaign total $12.7 million—or 85 percent of all expenditures to date ($14.8 million total). The majority of funds went towards television and digital advertising, direct mail, and gathering signatures to put I-1631 on the ballot.

The top 10 expenditures from the No on 1631 campaign total $28.2 million—or 95 percent of all expenditures to date ($29.6 million total). The majority of funds went toward television and digital advertising, and direct mail.

The disparity between the campaigns' advertising budgets has been apparent to local voters. Anecdotal interviews suggest that on the morning news, for example, the No on 1631 campaign has dominated the airwaves. Their ads are entirely negative, and focus on the costs of the carbon fee to consumers by way of higher electricity and gas bills and more money spent on gasoline at the pump.

The Yes campaign has maintained largely positive messaging that focuses on how a carbon fee will improve clean air and health. Lately, though, it's taken on a harsher tone to fight back against disinformation and highlight the out-of-state oil money fueling the No campaign.