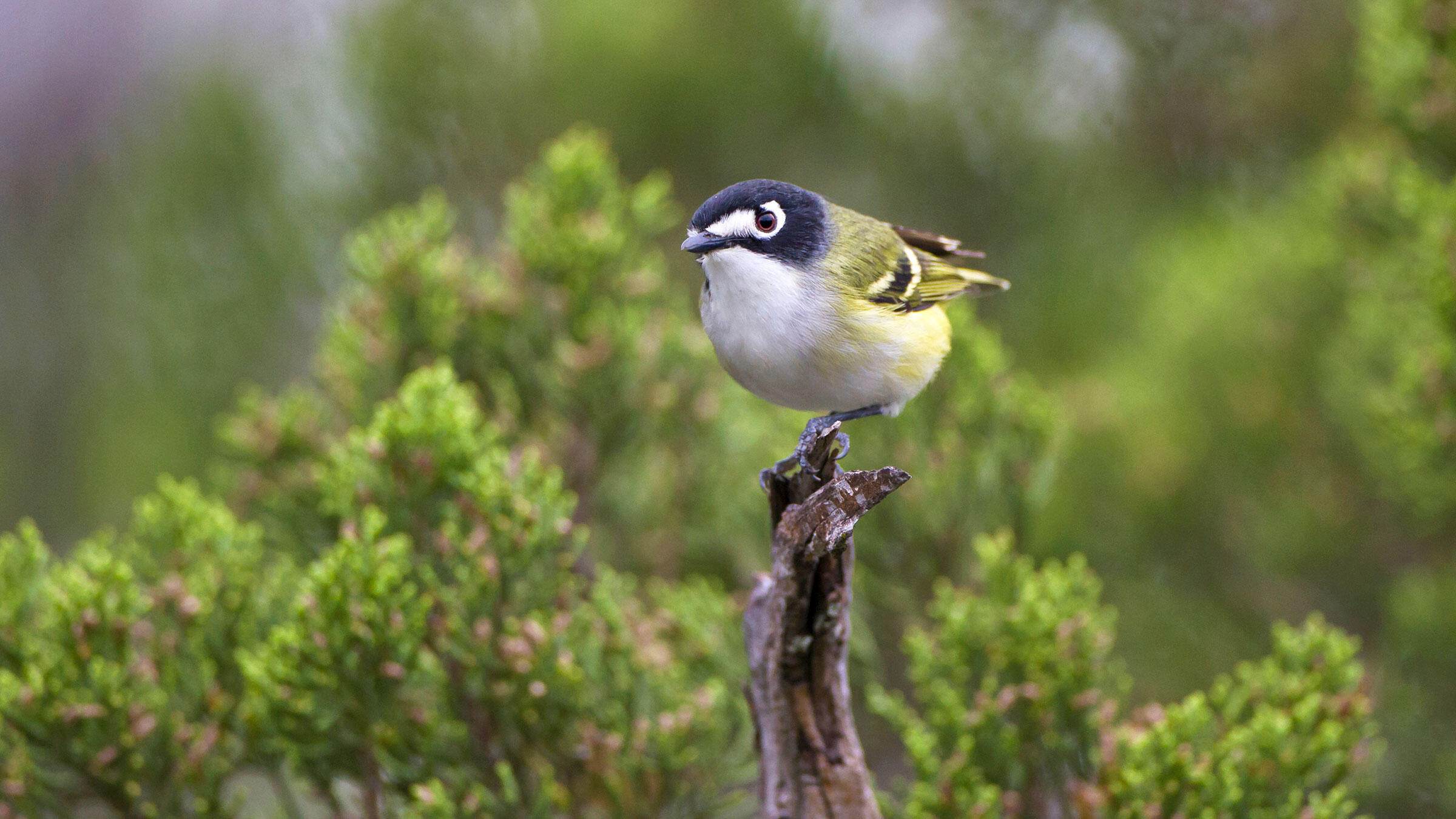 The Black-capped Vireo came off the endangered species list this March, but its future looks murky. Without dedicated funding, conservationists in Texas and other Southern states are worried they won't be able to maintain population growth over the next decade. Photo: Danita Delimont/Alamy

This past spring, like a fledgling leaving the safety of its nest, the Black-capped Vireo shed its protections under the Endangered Species Act. Only about 350 adults remained in 1987 when the U.S. Fish and Wildlife Service added the bird to the endangered species list, but after three decades of habitat restoration and other efforts by state, federal, and nonprofit partners, more than 14,000 males now sing across Oklahoma, Texas, and Mexico.

To ensure the vireo’s recovery doesn’t reverse course, the act requires wildlife experts to sustain a healthy population. But there’s a problem: “Unfortunately, that mandate is unfunded,” says Romey Swanson, director of conservation strategy for Audubon Texas. “Those are just words on paper.”

It’s a dilemma familiar to conservationists all over the country. In wildlife action plans submitted to USFWS, state agencies have identified some 8,000 animal species of “greatest conservation need,” including more than 800 birds. To implement those plans and keep species from sliding toward extinction, each state would need an average of $26 million a year—a total of $1.3 billion. But current federal spending for state and tribal wildlife grants falls far short of the mark, ranging from about $50 million to $90 million annually.

“We don’t have a proactive solution in place to stem that tide,” says Naomi Edelson, senior director of wildlife partnerships at the National Wildlife Federation. “We’ve basically set up a model where we wait until they’re endangered, and then take action to recover them.”

Enter the Recovering America’s Wildlife Act (RAWA), which would create the first dedicated funding source for species flirting with danger. Introduced by Representatives Jeff Fortenberry (R-NE) and Debbie Dingell (D-MI) in December, the bill has 44 Democrat and 37 Republican cosponsors in the House. A similar bill that debuted in the Senate last month has also garnered support from both sides of the aisle. Meanwhile, a letter supporting the legislation has around 1,000 signatures from a spectrum of outfits and industries, including universities, state wildlife agencies, hunting and angling groups, Duke Energy, the folk-rocking Avett Brothers, the Cornell Lab of Ornithology, and the National Audubon Society.

Here’s how the proposal works: The act would steer a steady $1.3 billion in existing annual revenue—collected from energy and mineral leases on federal lands and waters—into a conservation account that hews closely to state wildlife action plans. The funding would be disbursed to states based on their population and land area, with the stipulation that no state can receive more than five percent or less than one percent of the pot. States would have to match at least 25 percent of the money they receive.

Some wildlife have unique needs that recreation-based management can’t meet.

Currently, state wildlife agencies rely on revenue from excise taxes on hunting and fishing supplies. But since hunters and anglers provide the funding, the money is typically spent on projects designed for the species they pursue. Those initiatives can help non-game animals, too—good Ruffed Grouse habitat is often good Golden-winged Warbler habitat, for example—but some wildlife have unique needs that recreation-based management can’t meet. The new proposal would prioritize funding for species that need it most, game or not.

For states as vast and populated as Texas, RAWA could be a real jackpot. Right now, the state is scraping by with $800,000 in federal wildlife grants, $250,000 from sales of a specialty license plate, and a few other small funding streams. If the bill passes, though, Texas would receive the maximum allotment of roughly $63 million a year to help maintain its biological diversity. “The way I look at it,” Swanson says, “if our wildlife division’s entire budget is around $32 million, and you’re bringing in $63 million that’s statutorily obligated for species of greatest conservation need, you’ve just changed the paradigm for wildlife conservation.”

The Lone Star State is far from alone in its conservation-funding shortfalls. “The gap between what we would like to do—which is laid out in Michigan’s wildlife action plan—and what we’re able to do is great,” says Dan Kennedy, endangered species coordinator for the Michigan Department of Natural Resources. “We know we’re limited, so we try to pick projects that are within our limits of budget and staff time.” Under RAWA, the agency’s budget would multiply from $2 million to about $31 million, a possibility that has Kennedy and his colleagues dreaming bigger for species like the Golden-winged Warbler, Henslow’s Sparrow, and endangered—but likely soon-to-be-delisted—Kirtland’s Warbler.

Supporters say they’re optimistic about the proposal’s prospects, particularly because it uses existing funding instead of raising taxes or fees. So far, however, no one has identified a way to replace the $1.3 billion that would be taken out of the treasury if energy and mineral leases are reapportioned. A pay-as-you-go budget rule in Congress requires such offsets for new spending, but advocates note that lawmakers waived that rule to pass massive tax cuts last December.

The bill still has to net a majority in both houses of Congress before it can advance (it was previously introduced by Rep. Don Young (R-AK) in 2016, but died with just 19 cosponsors on the docket). Nevertheless, at a time when the Endangered Species Act, Migratory Bird Treaty Act, and other landmark environmental laws are under attack, the deep bipartisan support for the RAWA is encouraging, says Suzanne Langley, executive director of Audubon Texas. “This is, to me, one opportunity that isn’t partisan,” she says. “It is just a great way to address conservation issues that experts in each state have spent a lot of their time identifying. There have been few times in my career when you see so much support across the board.”

The Congressman from South Florida has introduced his own carbon tax, a political compromise that aims to reduce emissions on a national scale.