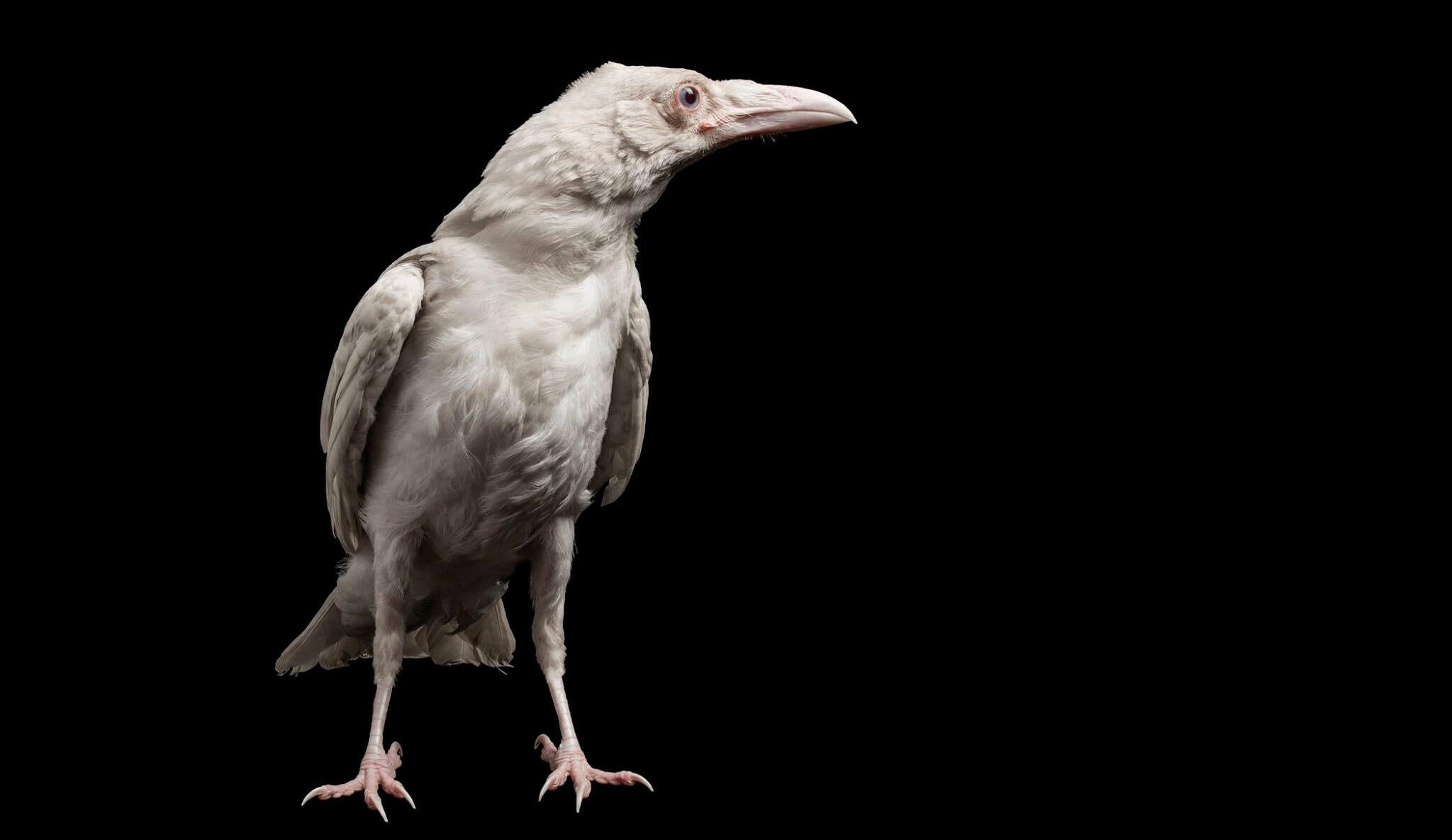 A rehabbed corvid’s caretaker wants to find its killer before it's too late.

A little over a year ago, Madena Bennett got a text from the California Wildlife Center about a “white bird” that animal control had brought in. Bennett, a wildlife rehabber, expected the usual—a captive dove that had been released at a wedding or a religious event. Instead, she arrived to quite a surprise: a young albino Common Raven.

Albino ravens are some of the rarest birds in existence; the bird Bennett found at the CWC was believed to be one of just four albino ravens in the entire world. “These kind of creatures are more mythology than reality,” Bennett says.

After realizing that the adolescent standout couldn’t make it on its own, Bennett, who used to be a volunteer at the center, took the female fledgling home and applied for the federal permits to take care of her. The two-month-old raven was afraid to be alone, and she took up residence on a perch next to Bennett’s bed. Though she was shy at first, she soon began acting more her age . . . and type.

“Like most ravens she had an insatiable curiosity; everything around her was something to figure out, or a toy,” Bennett says. “She was all about reducing things to their simplest components.” The world was her oyster. So Bennett called her Pearl.

Juvenile ravens stick to groups until they reach maturity, and use them to find a mating partner, which is a very stressful process for the birds. Though she exhibited the typical behavioral traits of a raven, Pearl had her eccentricities, and would have likely been ostracized from raven gangs.

For one thing, there were her feathers, which lacked melanin and had an atypical structure that stripped them of waterproofing abilities. They were also sticky and collected dirt, giving Pearl a grimy sheen. Once, Pearl tried on Bennett’s lipstick, smearing it all over herself; her belly was pink for months.

The raven was also vulnerable to sunlight and couldn’t endure long flights, tiring easily because of her brittle feathers. “Her feathers were dull and fluffy, like a chicken,” says Bennett, “and extremely frail. Her tail had mostly disintegrated.”

Though albinism would have been a death sentence in the wild, Pearl’s charisma and even temperament made her the right fit for another role. Bennett runs a non-profit organization, Talon Conservation Inc., to help further Californians’ appreciation of the birdlife around them. Pearl proved the perfect avian ambassador.

“Even people who didn’t like birds would say ‘Wow’ when they saw her,” says Bennett. “That was Pearl’s first word because she thought it was a normal greeting.”

Pearl picked up some other commonly heard phrases too, like “I love you,” “Oh my God,” and “What a mess!” (Ravens are great imitators and are known to pick up human voices in captivity.)

Things were looking up for the bird and her caretaker. But on the morning of May 13, Pearl broke free of her jesses (holding leashes) while the pair were packing up for an event. Bennett called after her, but as Pearl was circling back, she was surrounded by a mob of young crows, who dive-bombed her relentlessly, driving her off course. Bennett jumped in her car to follow, but quickly lost track of her friend.

Friends and neighbors put up more than 200 posters in the area, called local veterinarians, surfed clinic web pages, and visited shelters to look for the missing raven. But that night, Pearl’s story came to a sad conclusion. A shelter worker found her hunkered down in a driveway just a few hours after her escape. A bullet had pierced her humerus, back quarters, and likely, says Bennett, a lung. Even though there wasn’t much blood, Pearl died on the way to the vet.

Bennett, in shock and grieving, contacted the U.S. Fish and Wildlife Service to seek some redemption for the murder. As a Common Raven, Pearl was safeguarded by the Migratory Bird Treaty Act, a law passed in 1918 that defends birds against hunting, poaching, and poisoning. Corvids, like eagles and owls, didn’t land a spot on the list of protected species until 1972, but the treaty now covers most native bird species in North America.

Despite the wide reach of the law, Bennett was told that stories like Pearl’s often become cold cases, due to the lack of leads and evidence. Already having fielded plenty of donation offers, Bennett planned her next move—putting together a reward for information about the shooter.

So far Bennett has raised $3,825 through 110 supporters online, and the campaign still has 15 days to go. Her goal is $10,000. Half will go to the reward; the other half will support Talon Conservation Inc.

Bennett is also looking for witnesses so that USFWS can start building a case. The offender, if found, will face misdemeanor charges—which carry a fine of $5,000 to $10,000, plus one year in prison—or a much rarer felony conviction, which carries a maximum fine of $250,000 and two years of imprisonment.

Bennett wants to find whoever killed Pearl, but she’s not driven by revenge. Her real priority is to inform others that birds still face serious threats. According to documents obtained by Reveal this spring, 1.6 million birds across 300 protected species were killed over a three-year period in the United States, simply for being  “pests.” The slaughters occurred under special depredation permits from USFWS, which allow for relocating, damaging, or killing birds, eggs, and chicks in certain circumstances.

Despite these loopholes, birds should retain their protected status. “People need to know it’s not only wrong to kill most birds, it’s illegal,” Bennett says. “Whether you’re in your backyard with a BB gun, putting out poison to deter ‘pests,’ or a trained hunter with a rifle—it’s all the same under the law."