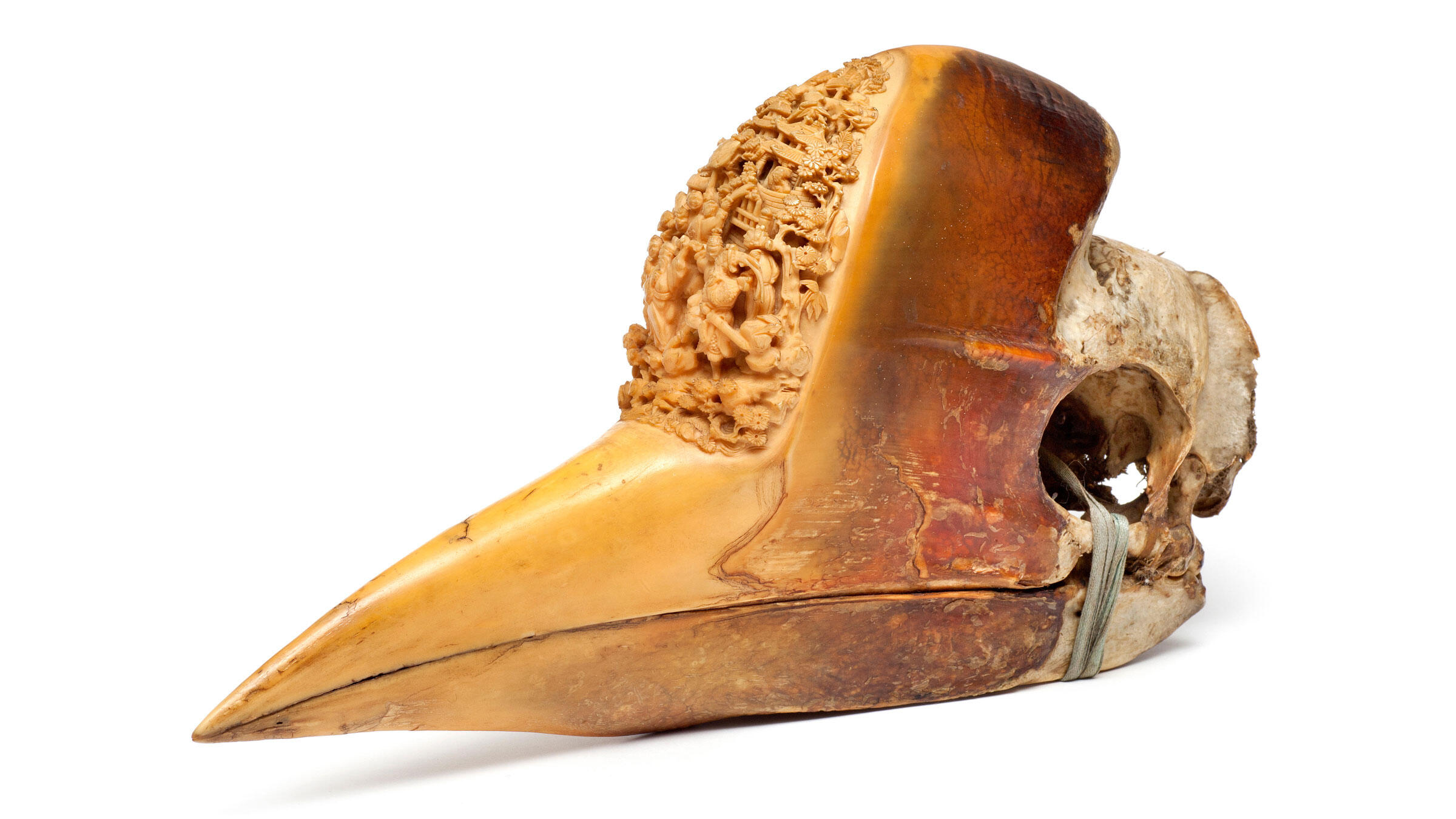 Undercover agents have discovered a fresh and growing appetite for hornbill jewelry, ornaments, and trinkets in Asia.

What's five times more valuable than ivory, beloved by poachers, and known on the black market as "golden jade"?  The answer is keratin, a protein found naturally in hair, nails, and Helmeted Hornbills. On us, the substance is expendable. But on the handsome and ornate hornbill, it's a commodity that fetches nearly $6 per gram.

Helmeted Hornbills hail from Southeast Asia, where they live in lowland forests. They are constantly under threat from logging and forest fires, and are listed as "near-threatened" by the International Union for Conservation of Nature (IUCN). Now, with the added woe of poaching, the population is being squeezed even further.

Under the Convention on International Trade in Endangered Species (CITES), it's illegal to sell any part of these birds. But highly organized poaching gangs continue to hunt the birds and sell their beaks by the gram. The severed parts are then transported to ivory markets in China and intricately carved into everything from belt buckles to brooches and cufflinks. Whole hornbill heads with beaks intact are sold in parts of the world, including India, as ornaments to be worn or displayed. All in all, the number of traded beak products “far exceeds published sightings of live Helmeted Hornbills in the wild,” an anonymous agent from the Environmental Investigation Agency (EIA) told TakePart.

But this desire for hornbill beaks isn't new; in fact the IUCN notes that the birds are characteristically wary and shy, thanks to a long history of human torment. The thick protrusion on the top of the bill, known as the "casque," has been sought after since the Chinese Ming Dynasty in the 1300s. Unlike other hornbill species whose beaks are hollow, Helmeted Hornbills have solid casques, making them even more valuable. Of course, these casques are just solid chunks of pure keratin, a substance that is readily available to everyone.

The investigators first picked up on the hornbill trade a couple of years ago when they noticed that online traders had added "red" as a codeword to the usual "black" (rhino horn) and "white" (ivory) products on their lists of contraband. The Chinese word for the Helmeted Hornbill's rusty-colored beak is hedinghong—hong meaning "red" in Chinese. Investigators believe that a growing number of wealthy Chinese buyers vying for this exotic "red" product is what's driving the poaching surge.

“Alongside the ‘black’ and ‘white’ products in trade that EIA regularly monitors, the volume of ‘red’ products in trade has become widespread in recent years,” an EIA official said in the organization's press release. “That can only be a profoundly worrying sign for these majestic birds.” The EIA also found that social media platforms like Facebook are making it easier to share information about available products, and making them more accessible to online buyers.

“There is little to no awareness about these birds,” the EIA official told TakePart. “Few buyers know what they are, let alone the impact the purchase of these products creates.” The organization is now appealing to Asian governments to educate the public about hornbills, in hopes that awareness will prevent further harm to wild populations. Maybe it will make them realize that the beaks suit the birds far better than they do humans.